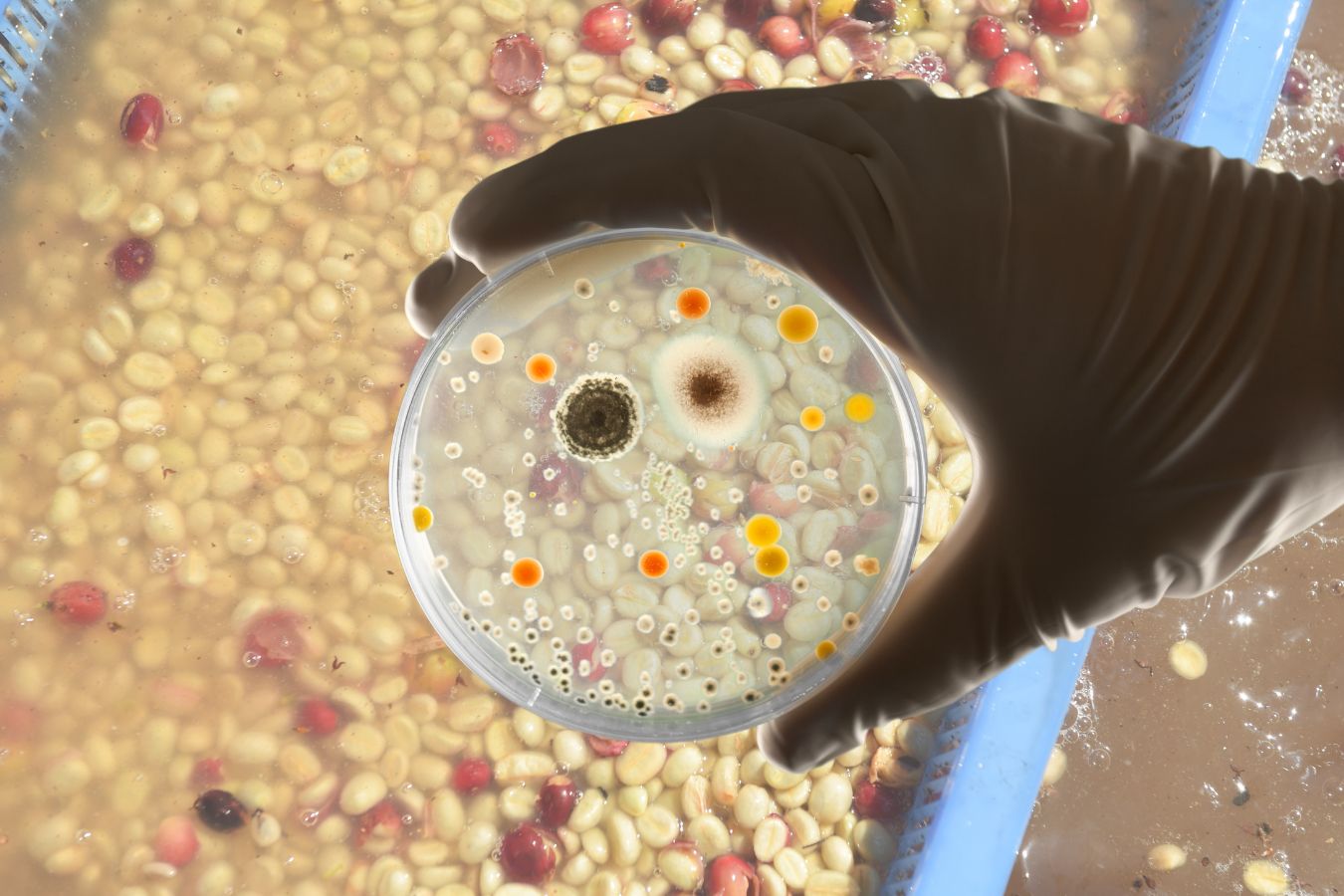 Biochemical Basis Of Coffee Fermentation: It can be said that fermentation is involved in producing most of the world’s coffee, but the coffee itself is not a fermented beverage like beer, wine, or kombucha. Instead, when we talk about coffee fermentation, we are referring to what the coffee berry has to go through from when it is harvested until its beans are completely dried and ready to go. roasting and grinding.

Fermentation is an integral part of coffee’s post-harvest processing and plays an essential role in flavour development, but fermentation is not a widely understood aspect of the coffee cycle. coffee production. Furthermore, although fermentation occurs in almost every coffee processing method, we often use the words “fermentation” and “processing” interchangeably and often incorrectly; although they are related, they are not identical. This has unintentionally oriented our customers to the wine or craft beer industry. Fermentation is a natural process carried out by living microorganisms in search of energy sources; Processing is a purely agricultural set of mechanical and technical steps designed to transform agricultural products into food.

While fermentation can be part of the coffee-making process, that distinction is essential. Therefore, this post will seek to clarify the chemistry, biology & microbiology-related issues of fermentation in the context of a “substrate” like coffee. These issues are fundamental to help you perfect your basic knowledge of coffee processing so that from here, we can discuss the fermentation process scientifically & indeed, instead. of as vague as a “colloquial”.

Respiration is the process that organisms use to harness the energy stored in organic compounds (sugars, fatty acids and amino acids from proteins), scientifically the oxidation of organic molecules. . Organisms that use oxygen then release carbon dioxide and water in the process. This is also the process by which plants derive energy from the sugars they produce during photosynthesis. In eukaryotes, the chain reaction of organic matter oxidation occurs inside a specialized organelle called mitochondria. Since the bond between two oxygen atoms in an oxygen molecule (O2) is a very high-energy bond, respiration is a very efficient way to derive energy from organic molecules.

Thus, the word “fermentation” describes converting sugars and other compounds by microorganisms such as yeasts and bacteria, which consume those compounds and convert them into energy for use. used, leaving valuable by-products such as Ethanol and various acids. Those converted compounds are absorbed into the cellular structure of the beans, and when heat is applied to those beans in the roaster, the compounds transform into the flavours we love in coffee.

“Fermentation” is also sometimes used, in a more general sense, to describe the metabolic processes carried out by microorganisms on foods or in bioreactors. For example, vinegar production (acetic acid) is sometimes called “oxidative fermentation” because vinegar fermenting bacteria (acetic acid bacteria of the genus Acetobacter ) perform ethanol metabolism in the presence of oxygen to form acetic acid (CH3COOH). This process occurs in many natural fermentation processes, such as the production of vinegar, kombucha, and any coffee fermentation product exposed to oxygen.

Purpose of fermentation in coffee processing

In pure production practice, fermentation is officially included in coffee processing because it is the cheapest way to remove mucilage from coffee beans. Although removing mucus with its main ingredient, pectin (a complex collection of polysaccharides ), is possible by mechanical means or chemical/enzyme addition. This requires more investment and equipment than conventional removal. Leave the coffee in a pile or soaking tank for a few hours. The scientific literature often demonstrates that two enzymes found in coffee, pectinase and pectase, act on mucous membranes during wet processing – however, this knowledge seems to be faltering.

The low pH value of the fermentation medium (pH=3.5-5.5) is the main cause of the swelling and dissociation of the polysaccharides of the mucilage in coffee – rather than the microbial pectinase enzyme system that they produce. we used to know.

The ground-breaking study by Avallone et al. (2002) demonstrates that mucilage degradation results from the fermentation medium’s acidification and not through pectin-degrading enzymes. The graph below, taken from their study, shows that the optimal pH range for all pectin-degrading enzymes (except Lactobacillus Brevis ) has never been found in a significantly large population in coffee fermentation. In other words, the optimal pH for the activity of enzymes (7.5-9.5) produced by microorganisms is much higher than the pH range used in normal coffee fermentation – acidic fermentation tanks. (3.5-5.5).

On this graph, only one strain of Lactobacillus Brevis L166 significantly reduced the viscosity on the coffee bean surface (about 45%) and was selected for further study. To add to that, the scientists showed that the cell wall polysaccharides that make up the mucilage of the coffee cherries are not entirely broken down during fermentation. The participation of bacterial enzymes, pectin-degrading enzymes such as Polygalacturonase (PG), Pectin Lyase (PL), and Pectate Lyase (PAL) in the structural change of the mucus layer is controversial.

This means that the producer/farmer does not attempt to introduce any additional microflora into the fermenter/tank. Fermentation without adding water will be faster, as the medium will turn acidic more quickly. The acidic environment causes the cell wall of the mesocarp ( mesocarp ) and the calcium bonds to loosen, leading to a change in the structure of the polysaccharide network of the mucus. In the absence of water, fermentation becomes less homogeneous and more challenging to control. Water increases the volume of the fermentation medium, diluting the microflora over a larger area. But at the same time, this raises the pH, thereby slowing down the acidification of the mucus.

Usually, the coffee is kept in fermentation vats/tanks until the mucilage is completely dissolved. Traditionally, this process is completed when the producer holds the beans in the palm of his hand with a gritty, pebble-like feel. If fermentation is stopped before this point, the coffee may contain residual mucus and sugar, making it harder for them to dry evenly. Over fermentation usually leads to the production of butyric acid and propionic acid, which can impart the flavour of rotten onion or rancid butter (Amorim and Amorim, 1977). Any defect during fermentation can be traced back to the growth of microorganisms that adversely affect coffee character and flavour. Coffee beans resulting from fermentation are often referred to as “ stinkers ” (Frank et al. 1965; Arunga 1982).

Bacteria of the genus Bacillus , especially B. megaterium , may be responsible for the production of propionic acid present in dry processed coffee . This species was found during fermentation, but propionic acid was only detected in high concentrations as fermentation continued after about 2 weeks. Excessive fermentation during drying can also lead to overproduction of acetic acid by bacteria of the Lactobacillales (LAB) and Enterobacteriaceae families.

Although the characteristic flavour of coffee is derived from the chemical composition of the bean, the microbiota responsible for fermentation may also contribute to the organoleptic characteristics of the coffee and its metabolites. chemicals are created in this process. In general, when referring to microorganisms, we often divide them into three main groups, with their different biological characteristics and functional roles in coffee fermentation, including bacteria, filamentous fungi (fungi) mould) and yeast.

Bacteria, a large and diverse group of organisms, live in many different environments and have other metabolic mechanisms. Most use oxygen to metabolize their food, similarly to animals. However, some metabolize their food without oxygen (anaerobic) through photosynthesis like plants – or even use inorganic compounds, such as sulfur, as an alternative energy source.

One of the earliest works on the microbiome of coffee came from research on wet-processed coffee samples from Colombia and Mexico. These authors isolated microaerophilic cocci and bacilli, such as L. mesenteroides , Lactobacillus plantarum , Lactobacillus brevis and Streptococcus faecalis, which hydrolyze the mucin but do not promote complete separation from the seeds. the coffee.

Most fungi ( Fungi ) have a multicellular structure. Like plants, they are composed of many cells (whereas bacteria are unicellular). Multicellular fungi grow in long filaments, so they are called “filamentous fungi”. These hyphae form a network, spreading throughout the material where the fungus grows and absorbing food through the mycelium’s surface. The individual mycelium is too tiny to be seen with the naked eye, so you won’t see “mycelium” on a coffee bean. However, when many hyphae are densely intertwined on a surface and begin to produce spores, it is often referred to as a mould. When the spores or mycelium are visible, the invisible hyphae have already spread deep into the material.

For coffee, there are not many studies regarding the involvement of filamentous fungi in the mucilage degradation of coffee berries. This was not unexpected – mucilage-dissolving fermentation typically lasts only about 48 hours and is essentially a medium with high water activity, more conducive to bacterial growth and yeast. Bacteria and yeasts grow faster than filamentous fungi, and in this way, they compete for nutrients and entry sites of filamentous populations.

Since the early 1900s, many scholars have studied the association of filamentous fungi ( fungi ) with coffee beans. Initially, the main concern was the potential of filamentous fungi (moulds) to contribute distinct flavours (Liardon et al. 1989). Still, in recent years, studies have focused on preventing the spread of fungal infections because of the ability to produce mycotoxins during fermentation. Studies show that coffee made with the dry process is more likely to be contaminated with fungal infections than coffee produced with the wet process due to the extended fermentation time.

Instead of forming filaments, some species of fungi exist mainly as unicellular. These fungi are called yeasts. Yeasts can produce spores, or they can reproduce asexually by budding. This ability allows them to copy quickly when food is plentiful.

Yeast cells are generally larger than bacterial cells because they contain more complex cellular structures, such as the nucleus and mitochondria. Some fungi can convert between unicellular and filamentous forms ( CP Kurtzman & J. Piškur, 2006 ). Yeasts use the sugars in their environment as a primary food source; some species need oxygen to grow, while others can grow in the presence or absence of oxygen. Without oxygen, these yeasts will use fermentation to obtain energy from food.

Scientists isolated about 200 types of yeast during coffee fermentation from dry processed coffee in Brazil. They are classified into 15 species with representatives of the family  Saccharomycetaceae  such as: Debaryomyces , Pichia and Candida . Of these, D. hansenii alone is the most common (about 40% of the isolates), followed by Pichia guilliermondii (about 20%). These species were found most commonly at 14-18 days of fermentation, when the total yeast population had increased to the maximum value.

In coffee processing, it has been noted that filamentous fungi can adversely affect coffee flavour and produce toxins that adversely affect the health and safety of consumers. Some researchers have observed that certain species of yeasts and bacteria isolated from coffee fermentation can inhibit the growth of these undesirable fungal species ( Schwan and Fleet, 2014 ). . The authors suggest that such species could be developed as a natural biocontrol agent and explicitly used as cultures to suppress unwanted fungi. Yeast species identified with such antagonistic activity are Pichia anomala, P. kluyveri, Debaryomyces hansenii, Saccharomyces cerevisiae, Hanseniaspora uvarum, and bacterial isolates are the species Leuconostoc, Lactobacillus and Enterococcus.

Problems related to the microbiome during processing often stimulate our curiosity about their consequences on the final taste of coffee. This has sparked a wave of research, experimentation, and reputation related to these not-so-new – but little-studied processes. While some manufacturers focus on limiting the risk posed by microorganisms, aiming for safe, consistent processing, others focus on advanced microbiological applications. set to explore ways to exploit the flavour potential of coffee fermentation.

However, both of these application directions require more in-depth exploration of the coffee microbiome in post-harvest processing, which is beyond the scope of this article – even to the point of needing to do so. a separate book on the subject. So, if you need to dig deeper, please respond in the comment section so we can consider further exploiting this content!