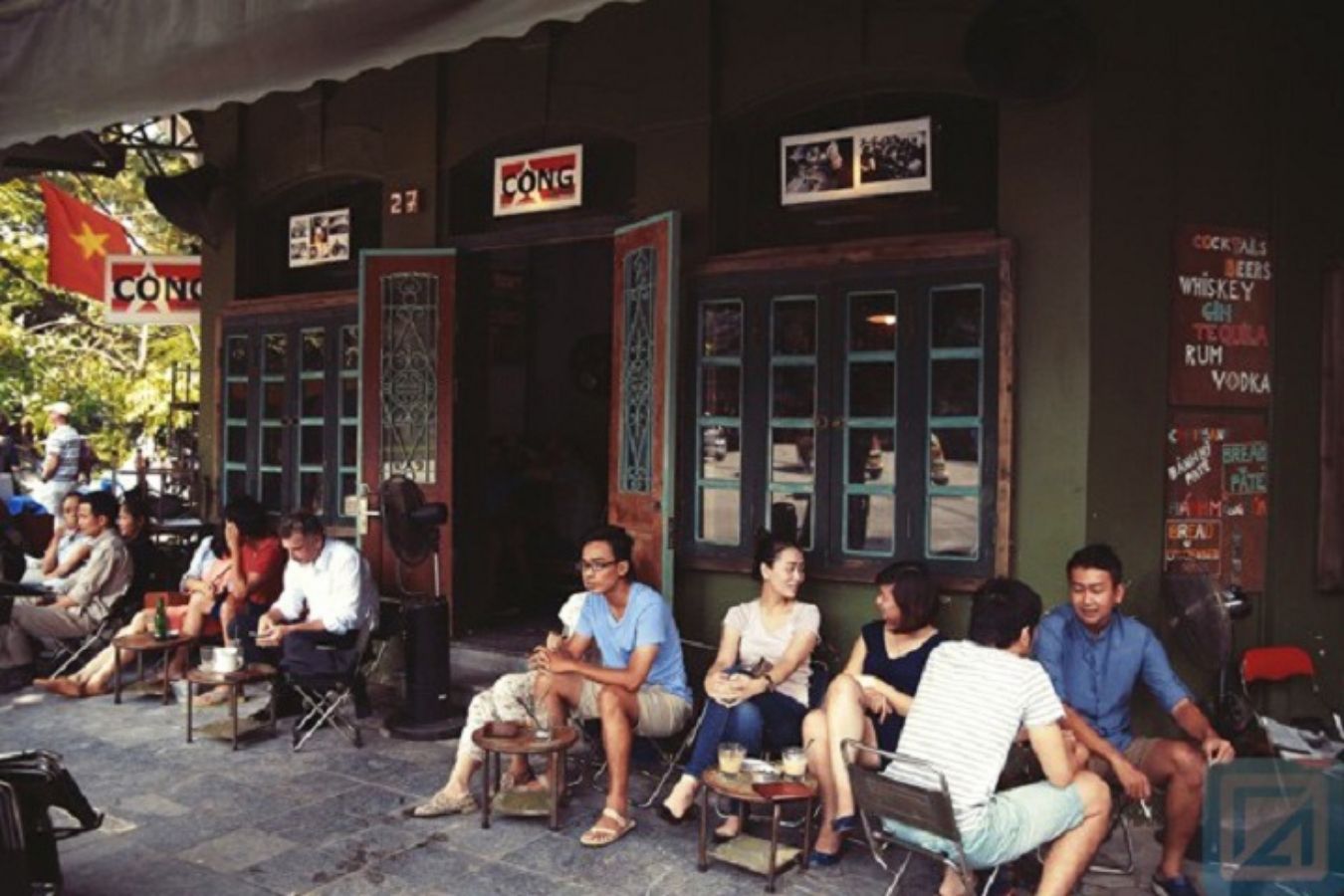 1. The shop has low chairs, customers who come to the shop like to sit in a slightly hunched position, slouched, like a herd of toads in front of the cave, so collectively these roadside shops are called toad shops.

2. The common way to prepare coffee: put the filter on the cup, so there is the idiom “coffee pot sitting on the cup”; The word “cup”, over time, is read as “toad”

3. Simulating the word toad in the sound of toads (tables and chairs moved in, the sound of spoons beating, stirring coffee) is a familiar sound in this type of restaurant.

What it is is unknown, but the idle person who wrote this article used to spend time reading a few dozen articles by famous writers, poets, and journalists to add wings to this type of street coffee and then came to firmly affirm that coffee toad is a specific cultural feature (even a cultural identity) of Saigon people. Poetry, music, and fine arts are inspired to describe and exploit this theme innumerable.

From the perspective of culinary history, it can be said that this is a type of restaurant with a very long history in the life of urban residents in Vietnam.

In 1475, the world’s first coffee shop was born in the Ottoman city of Constantinople (1453-1922), then more than a century later, from Yemen, coffee was exported to Europe, and the coffee culture was born in England, France, the Netherlands… Review the bullet points in the world coffee genealogy to see that, in today’s cup of coffee, the coffee we enjoy today must not be a purebred native thing, but has a clear background. of a journey – acculturation.

The French Catholics brought coffee into Vietnam during the missionary process and realized the colonial dream in the 1850s. Surely, the first stops were urban and then, the creation of plantations. fill. Up to now, Vietnam is not ashamed to be the second-largest coffee producer in the world and probably the country with the largest coffee-drinking population in the world (every year, the local market consumes 10% of the total worldwide). 800 to 1 million tons of coffee produced). Just like with tea, Vietnamese people drink coffee to fly, not to be rational or to theorize about it.

But from traditional French-style coffee to Vietnamese toad coffee is a long way of spectacular localization and adaptation, and at the same time bearing the profound endogenous imprint of the processes of social change over the years urbanization wave.

The Saigon coffee culture can be compared to the boléro music of the southerners, it was born to live with the heartbeat of immigrants in the process of self-adapting to become a true urbanist. Trinh Cung, a painter who used to work in Saigon’s art world before 1975, said that the habit of sitting at a coffee shop in Vietnamese urban areas is inherited from the sidewalk coffee culture of the French. “However – analyzed by Mr. Cung – when entering Saigon, the sidewalk coffee was divided into many different classes according to the classes and social status of the customers who frequented

For example, even in the world of art and the Saigon press at that time, there was also a distinction: high-class sidewalk coffees had the lobby of the Continental hotel (sitting in armchairs, high wooden chairs, on the central street) on the street. Tu Do (now Dong Khoi) is for newspaper owners, names that are closely related to foreign news agencies with prestige in terms of speech and academics. The sidewalk coffee of these “gentlemen” becomes a place to discuss art, political news, and the situation of global news… just like the elite middle-class salons in the West in the mid-twentieth century. . People still call this the sidewalk coffee in the center of Saigon, few people dare to arbitrarily use the smelly popular noun “toad shop” to name it.

Meanwhile, local journalists, closer to the common people, often sat around at real toad shops on the corner of Pham Ngu Lao – Bui Vien Street, near the newsrooms of that time. The peculiarity of this type of shop is that it is located in a working area, sloppy, dusty space, with diverse guests but in general, they all seem active and committed.

Mr. Cung also detailed the unique way of making coffee in these shops: the coffee is put in a stocking cloth bag and then soaked or boiled, pressed, processing sed at a time for a plurality, so it is called a sock coffee. The US word ” coffee sock” has been associated with the space of sidewalk shops since then.

After 1975, along with the fading social influence of the intelligentsia, the middle class, the luxurious sidewalk coffee space once resounded where the central streets also disappeared. Until 20 years after the promotion of the market opening policy, Vietnam joined the World Trade Organization, the portrait of business people was free from bourgeois suspicion, and the rich did not have to enter the natural world. world camel-like in the Bible, which can appear in the newspapers as successful examples, contributing to the change of society, first of all, urban areas.

Accordingly, the luxurious culinary space to meet the needs of this world returns to hundreds of famous racing houses. People see the image of the luxurious sidewalk coffees of the past reappearing on the prime locations of the sidewalks of central Saigon with a different atmosphere. The elegant elegance that mixed the intellectual colors with the legendary political anecdotes and news stories of the past has been lost, instead, there is more or less coquettishness and elegance in a fair way of communication. of the new dynamic spirit. Can’t help but be immune to the disease of the new rich – frivolous pomp, the sophisticated class chooses the sidewalk spaces as the “performance ground”, so the terraces.

Therefore, those who are stubborn, go to Highlands, Coffee Beans, NYCD on the sidewalks of Dong Khoi and Nguyen Du streets or the corner of the Crêperies & coffee villa on Han Thuyen Street today, try to find a little bit of “a little bit” of intellectual vitality. Son of Saigon before 75, only brought more pity. It’s best just to learn how to quietly sip American coffee in the thirty-five-degree heat on a summer morning and wash your eyes with thirteen feet for an hour. Between this type of street shop and the sometimes fake catwalk, it’s hard to distinguish!

Saigon Toad Coffee: a peaceful place for people from all over the world

Meanwhile, it is true that the most important mandarin of the time, the people of the ages, humbly put on the helpless status of an immigrant, and remained faithful to the gods forever in search of the promised land. Along with bolero music, the popular sidewalk coffee is present spontaneously and spontaneously whenever the immigrant gods have feelings.

It is possible to briefly describe the characteristics of this type of restaurant: low plastic chairs, field tables, no signed ns, no toilets to solve the hidden problems in the excretory mechanism of the two kidneys coffee fee toad does not need a birth certificate or name, because it is the unruly and wild child in the marriage between a culinary feature of the coffee culture of the imported colonists and the activities of a folk restaurant in the farming community. occupation of the natives. With the combination of the strong adventurous and conquering nature of the heterosexual father with the lyrical but spontaneous simplicity of the country mother, the child has enough strength and sensitivity to like her. respond to the streets with a quality of commitment, playfulness, and instinct that no single volition can “clean up”.

It has a poetic background and it makes no sense that it does not spawn poets who wonder to find their part in nothingness in the sprawling or confused sense of the city. (Surely, in the future, those who compose the history of contemporary Vietnamese poetry will refer to the toad coffee spaces as the birthplace of groups of “sidewalk poetry” full of independence and confusion. Most of the poets and street artists in Saigon during this period had quite the same starting point – immigrants, “set up language” and “set up a career” in the era. the tumultuous period with the fierce living in the city – surely, it seems that poetry is always with the souls with a bit of genuine countryside and spirit… very bolero!

Toad shop was born for many genders, but perhaps the majority of customers are idle immigrant urbanites, who, in the process of rubbing with the urban rhythm, have always had a mechanism to resist the dangers. psychological trauma, and the cultural shocks that urban areas bring. They need to stop and sit, need a break between the ups and downs of the road to make a living, and want and maintain their poetic and illusory souls in addition to another very strong need – affection and affection when the rhythm of life fades. can cause many relationships to become frozen or broken…

It is easy to explain, why connoisseurs of toad shops like cool quiet corners, beautiful street corners, enough distance from the main road, but enough vision to notice. noisy. The mentality that both are ready to separate from the sidelines to find a little privacy, ready to rush in and out of the chaotic flow and torment the ego by drowning in the chaos of mischief. content… And that’s the state of “coffee citizen”. And, this is also close to silence in reflective individuals. On the other extreme, humorously, it is very close to chaos, likes crowds, and can sit for hours just to gossip (speak up) to assert itself, and release illusions.

Regardless of the extremes, the toad shop is ready to open its doors to welcome guests with a somewhat exhausting burden. When equality in social life is rarer, the equal value that a cup of sidewalk coffee can bring is more satisfying and attractive to many people. The identity of the coffee cup (cannot determine the ingredients of ground coffee or the additive popcorn), the identity of the shop (unnamed, the owner is difficult to determine the background, now this place may be blown up tomorrow) with the status of visitors (as mentioned, those who are having problems with their bodies before a life of massive speed and full of indecipherable absurdity).

This explains the fact that many people sitting at the toad bar claim that they do not care about the quality of the drink or the legitimacy of the seat. The heads were still clustered at the small table. The boundaries in the park were littered with people. Endless stories.

The question posed from the beginning, whether sitting at a toad coffee to discuss what it is called a toad coffee, will probably not be answered thoroughly in the manner of those who try to put on it a layer of culture or nature. sharp. Because, it is simply a transformation of habits from one living space to another, from one way of life to another in a society with high spontaneous and irrational capacity.

This article may not be very popular with those who consider the coffee toad as an identity of civilized townspeople and try to erase traces of their rural connections (if any). But, like the illusion of a democratic and lyrical atmosphere that the restaurant space brings, this is just a voice of the will of a lunatic, choosing a low angle on the sidelines of the chaotic flow. the other beat just to keep an eye out for some provocative pair of white thighs that would pass by.

Any pair of thighs, simply, can be long. That’s the experience that the popular irrational republic of coffee toads can give us for free.