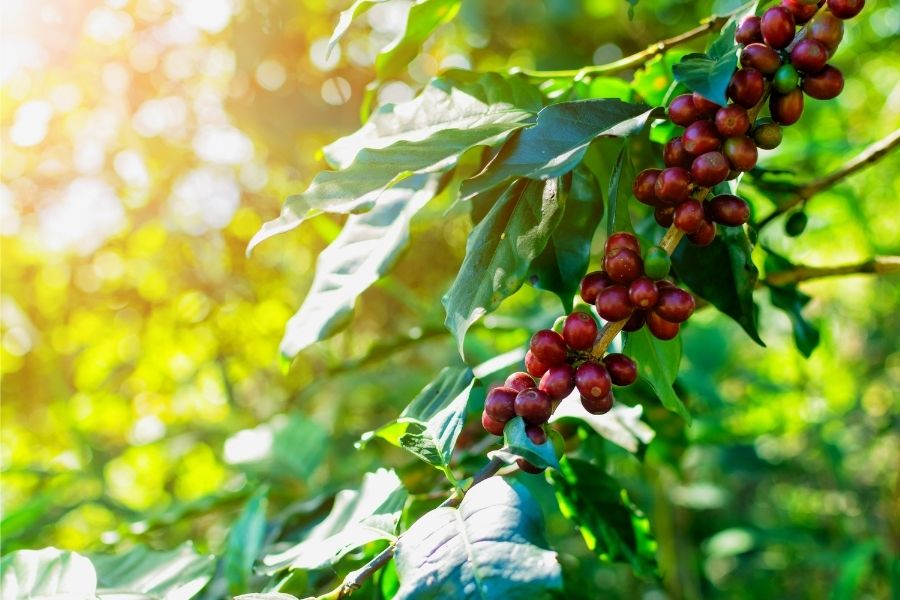 What is Moka Coffee, exactly?

Moka coffee is an Arabica varietal strain. Moka is related to well-known coffees such as Typica, Bourbon, Icatu, and Mundo Novo.

Because Moka was discovered in Yemen’s port city of Mocha, this coffee type is also known as Mocha Coffee. The missionary Marco Polo traveled to Yemen in the late 13th century and brought Moka beans to sell in Europe, which was the first time this sort of coffee was exported outside of Yemen.

However, it wasn’t until the 17th century that Moka beans really took off and became well-known throughout Europe, especially when combined with chocolate to create the famed Coffee-Chocolate flavor.

The French introduced Moka coffee seedlings to the northern provinces of Vietnam in the later years of the nineteenth century, around 1975. When they found the climatic conditions were favorable, they established large coffee plantations in the Central Highlands, particularly in Cau Dat and Da Lat.

Vietnam is home to the Moka coffee farming region

Vietnamese people have been attempting to cultivate Moka since they first learned about it. Regardless of the efforts taken, the taste of Moka will never be matched by Da Lat. With the popular name Moka Cau Dat, this plant is specifically planted and ideal for the Cau Dat area.

The temperature and soil characteristics in Da Lat are ideal for producing Moka coffee. It enjoys a cool climate all year due to its elevation, which ranges from 1500 to 2000 meters above sea level. Furthermore, the vast quantity purchased the freshwater source, and particularly the red basalt soil aid the Moka coffee tree’s greatest growth.

Do you know that Moka is the best-tasting coffee type, but it is also the most difficult to cultivate and requires meticulous attention, is prone to pests and illnesses, and demands both environmental and environmental conditions? Fertilization techniques are specific, but the yield is low.

Moka coffee trees can only grow and develop well for exquisite fruit at an altitude of 1500m (above sea level); they are a rare coffee that always costs more than other types of coffee, and it appears that not everyone gets a chance to enjoy it.

Moka is a difficult plant to grow, susceptible to pests and illnesses, and necessitates a lot of attention when compared to other Arabica coffee kinds. As a result, it has its own specific characteristics in terms of tree shape, fruit, and flavor.

The body of Moka coffee plants is usually light gray, and the roots are deeply embedded in the soil. The leaves are small, with only a few of them, and they are symmetrical on both sides. Because it is difficult to care for and susceptible to illnesses, common Moka trees will be less fruitful than good seedlings.

Because of the suitable temperature and soil conditions, Da Lat produces the best-tasting Moka coffee. It enjoys a chilly environment all year because of its elevation, which ranges from 1500 to 2000 meters above sea level. Furthermore, the big quantity purchased the freshwater source, and notably the red basalt soil aid in the greatest growth of the Moka coffee tree.

The taste of coffee

For people to name Moka coffee the queen of the coffee kingdom, there must be something distinctive about the taste. Those who know how to enjoy themselves will notice the change right away.

The greatest 100 percent original Moka cups have a subtle bitterness to them, as well as sourness and even a fatty taste from the oil inside the seeds. When sipping, the bitterness spreads through the lips and down the throat, yet the intense smell and sweetness come only a few seconds later, evoking feelings of reminiscence.

Because the Moka tree is difficult to grow and requires a lot of attention, it has a harsh flavor at first, but the aroma and sweetness that develop later are the product of patience and careful processing. That is what distinguishes Moka’s flavor from the rest of the globe.

Making a nice cup of Moka can be done in two ways: using pure coffee powder or blending it with another type. Each brewing method has its own distinct characteristics, but Moka coffee remains the most prominent.

As we all know, Moka is a great coffee product that is popular not only in Vietnam but also around the world. They are, however, more expensive than other coffee varieties since they are demanding about the growth environment, difficult to cultivate and take a long time to care for.

If you are passionate about this premium Moka Cau Dat coffee, please contact Kim’s Coffee production plant for additional information about pricing. and the most cost-effective method of payment and receipt.