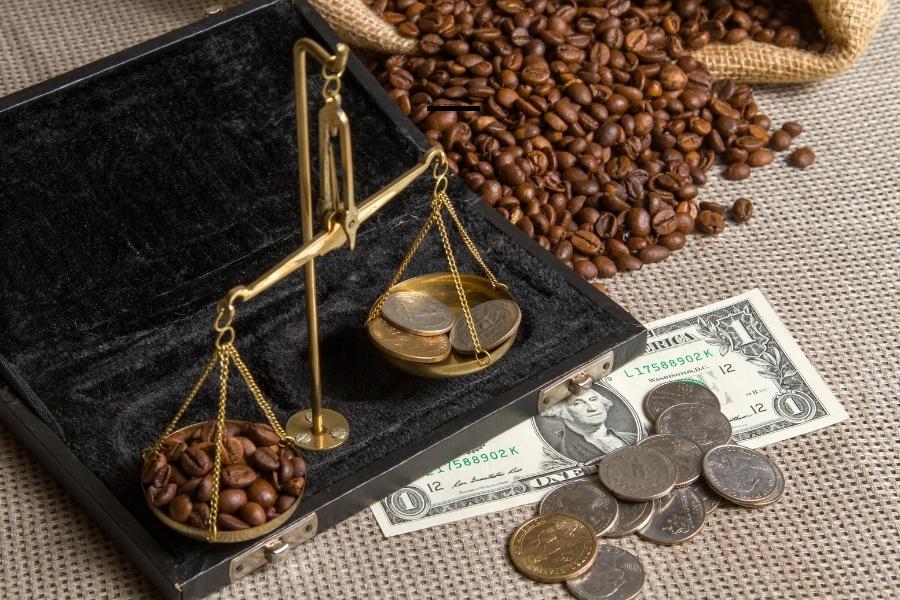 Exchange Rate Fluctuation: How Does It Affect Coffee Producers? A coffee grower earned $1.20/lb last week, and they were overjoyed. However, they now earn $1.30/lb and are upset. There are several possible explanations for this, but currency fluctuations are one of the most prevalent.

The price manufacturers get for their coffee is not just fluctuating on the worldwide market but also subject to currency exchange rates. Consider how these factors impact the true worth of what coffee farmers earn.

THE C PRICE: WHAT IS IT?

The bulk of coffee in the world is traded as a commodity. These are raw materials that are assumed to be of equal value across the board. This implies that higher-quality coffee crops from one nation will be traded alongside lower-quality coffee harvests from another, but both will be treated equally and will cost the same.

The Intercontinental Exchange (ICE) in New York is the focal point for the coffee trade. The price of coffee, referred to as the C price, is transacted in US dollars here (USD). Although speciality coffee sells for a higher price, it is nevertheless influenced by variations in the C price. Frequently, the amount paid is the C price plus a premium for quality.

The commodities market, on the other hand, does not follow simple rules. Prices are relative and fluctuate often. Coffee is not only purchased by coffee specialists, but also by traders who are exclusively interested in benefiting from the purchase and sale of commodities. Because it artificially confuses supply and demand, this speculation has the potential to have a significant impact on the C price.

Commodity prices should, in principle, be a straightforward representation of supply and demand. Poor weather, pests, violence, and other factors may restrict coffee supply, causing prices to rise.

Prices should fall if there is a lot of supply or there isn’t enough demand. The C price fell to its lowest level in a decade in 2019. Although a number of reasons contributed to this, the overstock of coffee from Brazil is one of the most prominent.

HOW DO EXCHANGE RATES AFFECT THE PRICES RECEIVED BY PRODUCERS?

Because the C price is determined in US dollars, the price discussed for coffee, even if it’s the speciality, is usually in dollars. With noteworthy outliers such as El Salvador and Ecuador, however, the majority of producing nations have their own currency. This implies that currency rates have an impact on how much farmers get paid for their coffee. Exchange rates, like the C price, are always changing.

As a result, the value of the US dollar, as well as all other currencies, is continually shifting. As a result, the true worth of the money spent on the coffee is immediately affected.

The value of the dollar may also affect the price of C. “If the US dollar is excessively strong, the C price normally falls to compensate for the final price.”

WHEN THE VALUE OF A CURRENCY CHANGES, WHO IS MOST AFFECTED?

People who make coffee will have different reactions to currency changes based on what role they play in the process. There is no doubt that if the coffee producer is exporting, currency fluctuations will have an impact on them.”

Coffee farmers who don’t sell their beans to other countries, like smallholder farmers, will not feel the same effects of the exchange rate. There won’t be any exchange of currencies because small producers will instead sell their coffee cherries or beans in their own area. If they sell the product to a dry mill or exporter, “they should be getting paid.” They should also get paid at the time of delivery.

However, producers at this level will be affected by the value of C price, which will make the prices paid at mills or cooperatives go up and down based on that value.

It isn’t just the people who make and sell things in the countries where the currencies are changing that are affected by them. There will be a lot of problems for green coffee importers because of changes in exchange rates and local prices, especially those who aren’t from the US.

When they buy green in dollars (especially if their home country’s currency is different), they also need to buy dollars to do this. This also depends on the size of the company

EXCHANGE RATES CAN ALSO AFFECT COFFEE PRODUCERS IN OTHER MANNERS.

While payments to coffee farmers are done in the United States dollar, all other payments are made in the local currency. This is where complications may occur. There are several steps in coffee manufacturing that need equipment and resources, ranging from labour and tools to plants and machines. Exchange rates may also have an effect on their pricing.

How a weak Brazilian real translates into higher coffee prices; yet, this comes at a cost. “In Brazil, we import around 80% of our inputs,” Otávio explains (raw material and fertilisers). If the Brazilian real is weak, our expenses will automatically increase.”

When the local currency is weak, imports of industrial inputs become prohibitively costly. As a result, profitability may suffer.

In 2015, Brazil’s real fell to a record low of 4.0665 R$ to the US dollar. Although the value of the currency decreased, this resulted in higher prices given to coffee farmers. However, the weak currency increased the cost of agricultural inputs, the majority of which are imported. Throughout 2015, the exchange rate drove the price of fertiliser up by 50%, reducing the profitability of coffee producers.

Currency fluctuations are cyclical in nature; for every high, there is an equal and opposite low. Increased pricing does not come without additional baggage.

HOW CAN COFFEE PRODUCERS SAVE MONEY ON EXCHANGE RATES?

Exchange rate impacts are not country-specific. Rather than that, currency rates influence all coffee growers worldwide, particularly those that are large enough to export but not large enough to participate in the futures market.

Access to the futures market is possible for larger producers. They can do this through hedging, which allows buyers and sellers to enter into contracts based on the current price of coffee, protecting it from fluctuating prices when it is paid for later. To reach this market, ICE requires farmers to produce a minimum of 37,550 lbs, thereby excluding many small growers.

For bigger manufacturers, dealings with private exporters are also a possibility. Tim, the creator of Yunnan Coffee Traders, describes a technique they trialled in Yunnan, China, which required contracting 30 MT of coffee from a wet mill for a three-year period at an agreed price.

While we had to factor in scenarios where the market collapsed or surged, we discovered that the wet mill earned roughly 30% more than local market prices for each year we performed this… and we were subsequently able to negotiate long-term contracts with roasters that included a three-year set price.

These bigger agreements may be out of reach for smaller manufacturers. However, cooperating with other coffee growers, for example, maybe an alternative. Larger coffee producer groups may profit from the creation of significant dollar sums for local currency transactions. While this does not guarantee against currency changes, it may help ensure a better bargain is achieved.

When discussing sustainable pricing, it’s important to keep in mind that the C price is seldom as straightforward as it seems. There are several variables that affect the price of coffee, ranging from the pricing of other commodities to the strength or weakness of the local currency. As a result, this has an effect on how lucrative pricing is for a coffee grower.

Topic: Exchange Rate Fluctuation: How Does It Affect Coffee Producers?