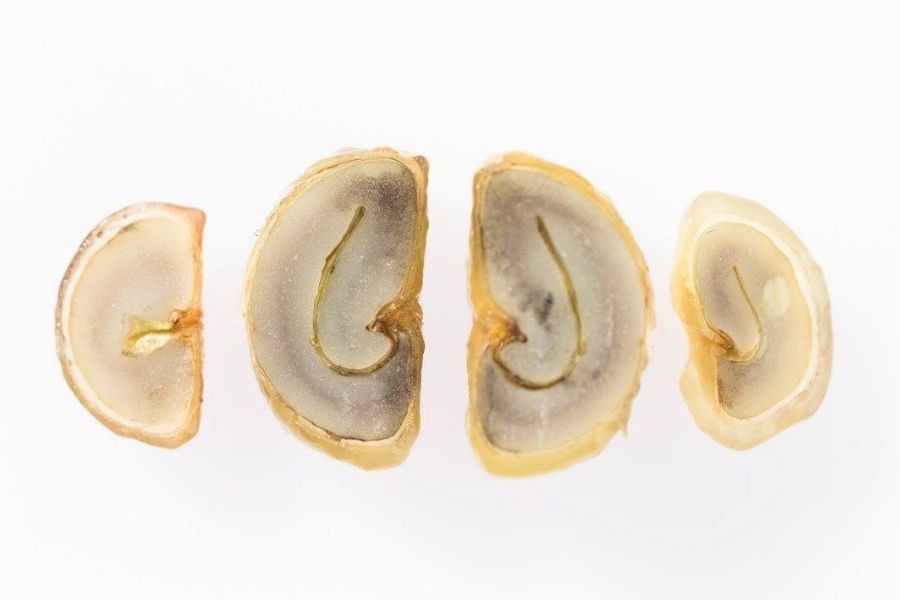 The 3-D cellulose, or polysaccharide sugar, molecular the structure of live green coffee beans is a matrix containing around 1 million cells. A matrix of hundreds of compounds covers the cellulose strand, which the roasting process changes into oils and soluble materials, which influence the flavor of the extracted coffee. Green coffee’s cellulose composition accounts for half of its dry weight. Molecular Cellulose does not contribute to the flavor of coffee, but it does trap/retain part of the volatile aromatic components that influence the aroma and gives the coffee viscosity, which increases its body.

Primarily sucrose accounts for 6-9 percent of the dry weight of green coffee and creates sweetness in the cup. The caramelization of sucrose during roasting produces acetic acid,  help which adds to the sour of coffee.

Lipids, primarily triglycerides, account for approximately 16% of the dry weight of green coffee beans. Despite the fact that lipids are insoluble in water, brewed coffee still includes them, especially when made without filtration (such as cupping) or with a filter with a wide porosity (such as espresso, French press, or metal- or cloth). -drip filter). Lipids in brewed coffee aid in the preservation of the scent and contribute to the texture of the beverage. Green coffee bean with a high lipid content is frequently thought to be of higher quality. Lipids, on the other hand, pose a quality issue because they are prone to oxidation and rancidity during roasted coffee storage.

Proteins and free amino acids account for 10-13 percent of green coffee beans dry weight. Nonenzymatic browning processes, also known as Maillard reactions, occur when amino acids and reducing sugars in coffees interact during roasting. Glycosylamines and melanoidins are produced as a result of these processes, which contribute to the bittersweet, brown, and roasted flavors. (meaty, roasted, and baked) coffee bean

2.5. Caffeine and Trigonelline are alkaloids

Caffeine and Trigonelline, two alkaloids that makeup around 1% of the dry weight of green coffee, are responsible for the bitterness and stimulating properties of the beverage. Caffeine is responsible for around 10% of the bitterness in coffee, as well as the majority of its stimulating effects. As a defense against insect consumption, the coffee plant secretes a lot of caffeine.’ Because of the lower chance of insect attack, a coffee tree cultivated at a higher altitude may produce beans with less caffeine. Trigonelline creates several aromatic chemicals and breaks down to pyridines and nicotinic acid during roasting, making it the most bitter component in coffee. Only 7 oz (200 g) of brewed coffee contains 20-80 ml of nicotinic acid, often known as niacin or vitamin B3, which may be responsible for the coffee’s anti-cavity action, depending on the roast degree.

Water should make up 10.5 percent to 11.5 percent of the weight of the coffee green coffee beans natural in the ideal situation. The color of the beans is often distorted and the cup has notes of hay and straw if the humidity is too low. Because the beans can roast too quickly, a roasted coffee beans must carefully apply heat to minimize the moisture level of the beans. Green coffee grows mildew and has a grassy taste in the cup if the humidity is significantly greater than 12 percent. Water hinders heat transfer within the seed, requiring additional heat for the seed to evaporate. Roasting seeds requires a lot of energy because they are moist, therefore it takes longer and requires more energy natural.

Acids of Organic Composition: Organic acids, particularly chlorogenic acid  (CGAs), account for around 7% to 10% of the dry weight of green coffee. Coffee’s acidity, acidity, astringency, and bitterness are all influenced by CGAs. The increased bitterness in Robusta could be due to the higher CGA concentration. CGAs provide antioxidant advantages to both coffee beans and coffee drinkers. Citric, quinic, caffeic, malic, acetic, and formic acids are among the other organic acids found in coffee.
Aromatics and gases are volatile aromatic molecules that contribute to the flavor of the coffees. Although green coffee contains over 200 volatile components, it lacks fragrance. Roasting coffee releases a vast number of aromatic chemicals, with researchers identifying over 800 volatile molecules in roasted coffee green beans too far new.