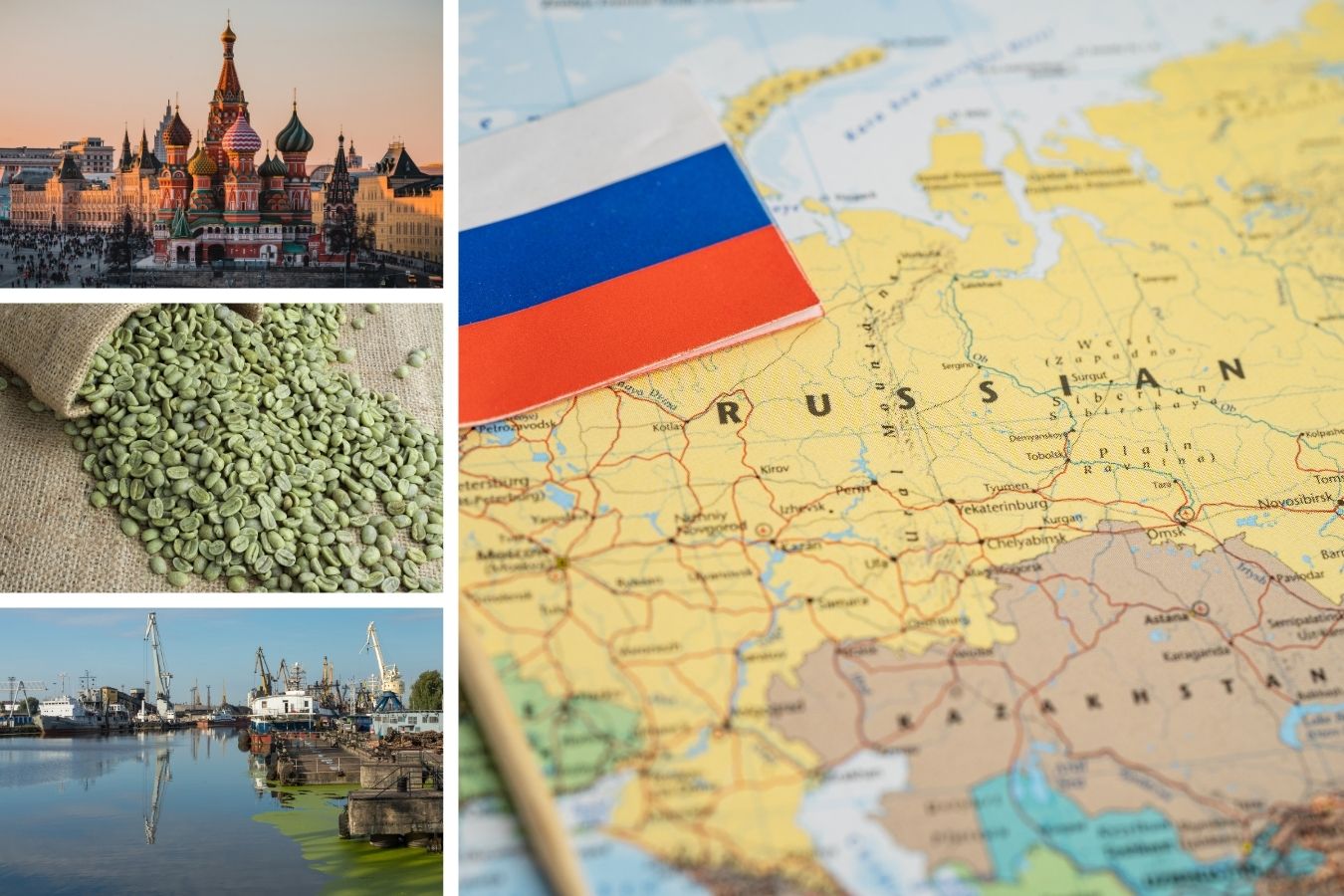 With many years of experience in transporting coffee from Vietnam to Russia, Helena Coffee Vietnam will advise and answer the above questions in this article.

Shipping Methods The Coffee from Vietnam to Russia

Russia is a federal republic located in the north of the Eurasian continent; this is the largest country in the world by area.

Due to geographical features, transportation from Vietnam to Russia is mainly by sea and air.

Seaports in Russia –  Export and Import Coffee To Russia

Time to transport Coffee from major seaports of Vietnam to Russia

Once the Coffee are ready to be delivered to the exporter’s warehouse, the standard shipment process includes the following steps:

Shipping time and shipping cost are closely related to each other depending on many factors on time and specific shipment … so in our opinion, the best way to get these numbers is to contact the international shipping company.

The Port of Saint Petersburg is located on the Neva Delta Island in the Neva Bay area. The port is equipped for marine trade, timber, fishing, oil wharf, shipbuilding and repair, river harbour and tourist wharf, including 38 berths with 7,147 m.

The container terminal is spread over 65 hectares, operating with the capacity of 4 cranes. The port of Saint-Petersburg is the essential transport route between the East and the West.

Saint-Petersburg Port Joint Stock Company is the largest operator providing dry transhipment at the port of Saint-Petersburg and Northwestern Russia. Established based on the Leningrad Sea Commercial Port, the enterprise has enjoyed successful development in the market.

The first dedicated container terminal at the Leningrad Commercial Port was established in December 1973. In the 35 years since this date, container shipping has acquired preferential significance in the international cargo handling market. And FCT became the largest terminal of Saint Petersburg Seaport.

In October 1998, “First Container Terminal” (FCT) was established as a stevedoring company specialising in handling containers to operate and develop a container terminal in the 3rd cargo area of ​​Saint-Germain Seaport. Petersburg.

Services available at the port:

Currently, 500,000 TEUs annually can be handled quickly and with quality at the port:

The port of Novorossiysk plays a vital role in maritime traffic and commerce in the South Russian region, providing the most significant annual revenue stream in Russia and the fifth largest in Europe.

Considered one of the largest ports in the Black Sea Gulf and the largest in the Krasnodar Krai region, the Novorossiysk port accounts for 20% of all imports and exports through Russia’s seaports.

In 2006, Stevedore Joint Stock Company was established to manage operations at the port of Novorossiysk. Not long after that, the company merged the six largest port and stevedoring companies, creating an organised system that organised cargo handling at the port easier. Specifically:

Novorossiysk Grain Pier is a high-speed pier that transports and stores grain with a capacity of up to 4 million tons of cargo per year.

The Novorossiysk Shipyard specialises in the repair of ships and the transportation of non-ferrous metal Coffee and metal scrap.

The port was put into operation as a commercial seaport in 1991; since then, Vladivostok has not stopped developing.

With the highly favourable geographical location of the port of Vladivostok predetermining its essential role for sea transportation and the shortest trade connection in the Asia-Pacific region, the incoming traffic flows to Korea, Japan, China, Taiwan, Thailand and Vietnam.

Port of Vostochny” is the largest loading and unloading port in Russia, specialising in the transportation of hard coal.

The structure of the Vostochny Port includes three processing complexes. The first complex is the only one in the Primorsky dedicated coal complex with a conveyor system and a train loading and unloading station.

The degree of automation is close to 98.9%. The second is a Universal Processing complex specialising in clamping coal feeder shells. And finally, the coal processing complex.

The main commodity is coal mined in the Kuzbass region. In 2016, coal export volume was 100% of total merchandise sales. Since its inception, 390 million tons of coal have been transported on its berths, 6.6 million trains have been handled, and 28,000 ships have been accepted for loading.

Over the past ten years, the Vostochny Port Joint Stock Company has transported more than 200 million tons of coal Coffee, thus setting an absolute record among all Russian coal ports.

Magadan Seaport is a major seaport of the city of Magadan, Russia, in the Nagaevo Bay region on the northern coast of the Sea of ​​Okhotsk. The port has a land area of ​​32.64 hectares, including 13 berths, including three berths for oil, two berths for containers and eight berths for other cargoes.

Vietnam is the largest source of coffee for Russia

Russia’s coffee imports have been on an upward trend over the years.  Vietnam is the largest supplier in terms of quantity.

Vietnam is the largest source of coffee for Russia by volume. In the first nine months of 2021, Russia imported over 61 thousand tons of coffee from Vietnam, worth $116 million, down 8% in volume but up 4% in value over the same period in 2020.

In terms of turnover, Vietnamese coffee ranks second in the Russian market after Brazil (US$133 million in the first nine months of the year).

Thanks to the development of the coffee processing industry in Russia, the country’s demand for coffee imports has increased in recent years. Currently, Russia is the 7th largest coffee importer in Europe.

According to the World Coffee Organization (ICO), Russia’s coffee consumption grew by an average of 2.7% between 2018 and 2021, which shows the country’s preference for coffee-based beverages. Get high.

The Russian coffee market is forecast to grow thanks to the growing popularity of coffee in the country, fueled by increasing demand among young consumers.