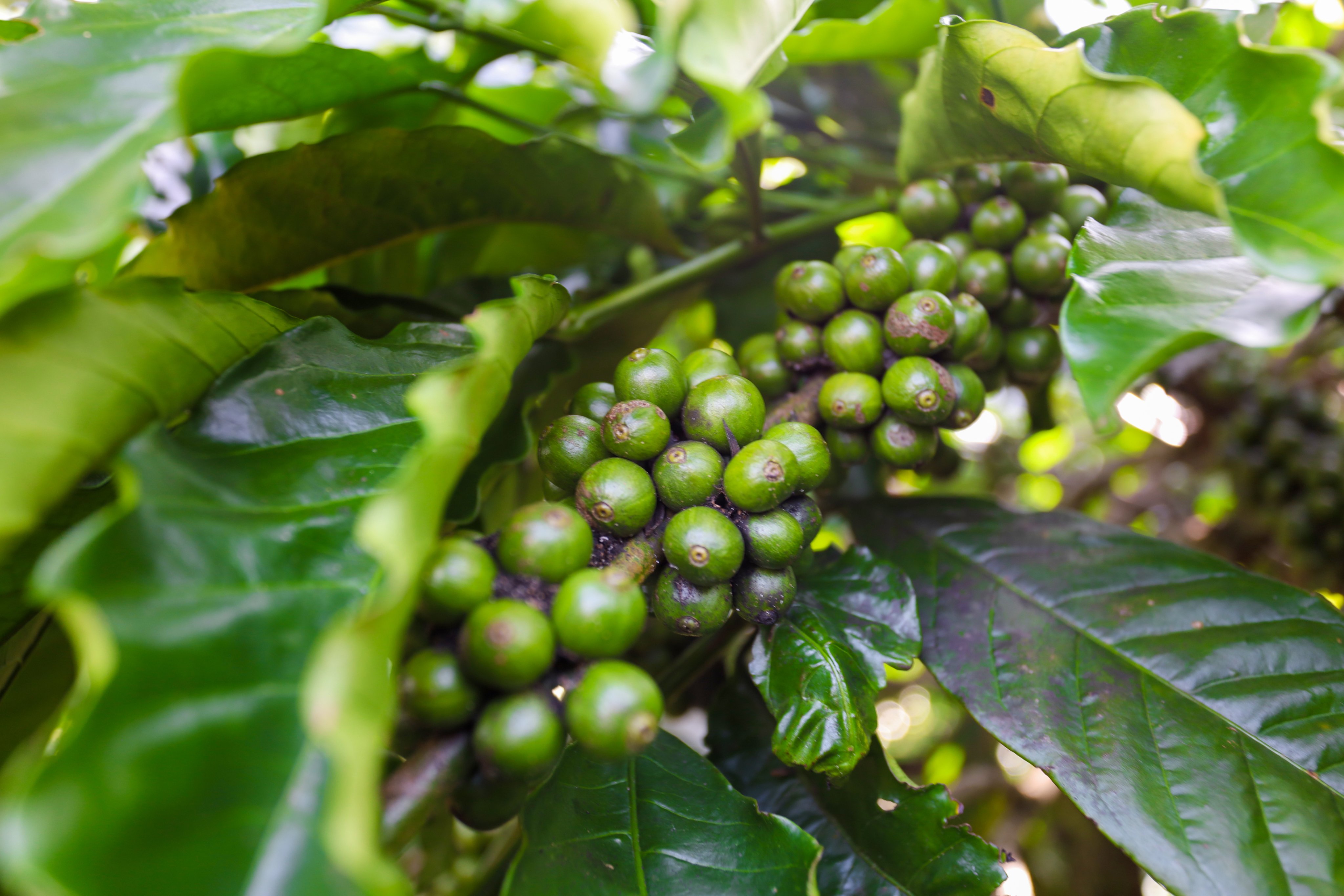 Liberica Coffee – Origin & Biological Characteristics: More than 120 species of coffee have been identified in the genus Coffea. Producers, traders, roasters, baristas, and consumers will be primarily familiar with two of these: Arabica and Robusta.

What is Liberica Coffee?

However, the third species after these two is mainly grown in Southeast Asia: Coffea Liberica. Today, it is the main species of coffee grown in Malaysia and the Philippines (philippine coffee). So, where did Liberica come from? How does it taste? And could it become more popular in the future?

Liberica coffee is also known as Excelsa (or Coffea excelsa ), in Vietnam it is called Jackfruit coffee and is known as Kape Barako (or Baraco ) in the Philippines – where it is commonly grown.

Where does Liberica coffee come from? Coffea Liberica originated in Liberia, West Africa. However, it is mainly grown and consumed in Southeast Asia – namely the Philippines, Indonesia, and Malaysia.

Liberia accounts for more than 70% of all coffee grown in the Philippines alone. “It probably started in Liberia, the Liberica coffee tree went to Ethiopia, and from there it may have reached the Middle East and thus spread to Southeast Asia. (At that time, Muslims often came to Malaysia for religious reasons – According to Pacita Juan, member of the United Nations Food and Agriculture Organization’s Steering Committee on Forestry and Farm Facilities.

It is also possible that the colonists brought the Liberica coffee plant to Southeast Asia when they settled, as much of Southeast Asia was occupied by the French, Dutch, or Spaniards. These European colonists will bring coffee with them, then influence the coffee-drinking habits of most Southeast Asian countries, – adds Pacita.

The development of Liberica coffee

Although the details of how Liberica arrived in Southeast Asia are controversial, studies indicate that it experienced a significant increase in popularity in the late 19th century. This opportunity came from approximately 1890 when an epidemic of coffee leaf rust swept through more than 90% of all Arabica crops worldwide. Therefore, resistance to diseases and pests becomes a top priority when selecting coffee varieties.

While many producers switched to Robusta at this time, producers in the Philippines were encouraged to grow Liberica instead. This is because the Liberica plant is much more resistant to coffee leaf rust, and it can also be raised more easily than Arabica with a broader temperature range. Furthermore, it is also more difficult for insects to penetrate the rind of Liberica berries, as they are significantly firmer. The proximity and ease of travel from the Philippines to other Southeast Asian countries have contributed to the rapid spread of this species.

The Philippines is just a boat ride from Malaysia and Indonesia. “Coffee and spices can move from country to country without the need for large ships.” — Pacita Juan, UN.

Gonzalo Hernandez is a Coffee diva, a “coffee garden” in southern Costa Rica that grows more than 700 different types of coffee. He explains that “Liberica can be found growing wild throughout tropical Africa. it is a very hardy plant; in the conditions of Coffea diva, it grows very well and even has a few natural mutations here.”

Liberica trees begin to bear fruit five years after being planted. They grow very tall, with some trees reaching up to 17 meters tall – this can make picking the fruit difficult. The leaves and fruit of the Liberica coffee plant are also significantly more significant than the leaves of the Arabica and Robusta plants. Liberica leaves can grow up to 30 cm wide, and the ripe berries of this species can be almost twice the size of the other two varieties.

Not only have the leaves as big as jackfruit leaves, but the Liberica coffee tree also really smells like a jackfruit!

The remarkable thing is that the pulp/kernel ratio for Liberica is around 60:40, compared to the 40:60 ratio for both Arabica and Robusta, which not only increases the drying time for Liberica berries but also affects the taste. . “Because Liberica has a lot of fruit pulp and ferments when naturally dried, it has a variety of fruit flavors, including a taste like a jackfruit – a fruit trendy in Southeast Asia,” explains Pacita. The wild Liberica coffee trees in the Liberica region also carry the typical flavors of jackfruit – rather than citrus fruits like oranges or mandarins.

In addition, other notable flavor characteristics of Liberica include a long aftertaste and consistent sweetness – Liberica is often described as sweeter than Arabica. This may be because Liberica seeds are more porous, meaning the kernels can be absorbed more sugar from the mucus layer.

About 20 years ago, Liberia less appeared on the global coffee market and was mainly used to produce coffee melt goods. Farmers often mix Liberica with Robusta because there are no buyers. Usually, they will sell this blend to instant coffee manufacturers like Nestle or those who typically buy Robusta. However, many efforts in the early 21st century helped popularize the species in the Philippines.

Liberica had her own book about it in 2005, called Barako: The Big Bean ; It explains that Liberica has a higher value than commodity Robusta , aiming to drive interest in the cultivation of this species.

Today, Liberica has a strong position in the Southeast Asian market – partly because of the demand generated by religion. Malaysia and Indonesia are mainly Muslim countries, and therefore after prayer, drinking coffee is often part of the people’s routine. Moreover, the Middle East also has a demand for Liberica – It has a fruity flavor, and is lightly brewed, almost like tea… it is often drunk with dates, as an afternoon tea.

The future of Liberia Coffee beans

Around the world, perceptions of Liberica are beginning to change and improve. There have been symposiums focused on specialty coffee beans Liberica, and there was even a Liberica roasting contest. It should be noted that, just like Arabica green coffee beans, producing specialty or high-quality Liberica is “The only way to overcome the negative connotations associated with quality is to allow specialty coffee lovers to enjoy the specialty of Liberica coffee beans,” according to Pacita.

Advanced roasters need to incorporate Liberica coffee into their specialty coffee production processes for this to happen. This may be of particular interest to some third-wave coffee shops and roasters, particularly those interested in rarer, more unorthodox coffee varieties.

For farmers, Liberica can bring many benefits. Besides being resistant to pests and diseases, it grows well among other crops, allowing farmers to diversify crops for added stability; You can even grow Liberica trees among other fruit trees like bananas, papayas, pineapples peanuts, etc. These are economical solutions for farmers; instead of harvesting coffee only once a year, Liberica allows them to plant crops in between harvests.

Climate change is shrinking much of the land suitable for growing Arabica coffee, with strict temperature requirements. For farmers on the Arabica farming “belt,” investing in a more robust crop is the only option. Liberica beans is more resilient than coffee beans Robusta in some areas – its root system grows deeper and can adapt to various soils. However, the Liberica plant is not as productive as the Robusta plant, making it a trade-off.

Finally, if we want to work together to promote the coffee industry, the diversity of the species we grow is very important. It’s a step towards broader sustainability for coffee producers and the supply chain at large.

Coffee Bean Liberia’s unique flavor profile, high resilience, and background make it an attractive new option for producers and consumers. That can be a rare opportunity in an age of many problems and concerns. However, whether it is considered a solution remains to be seen more.