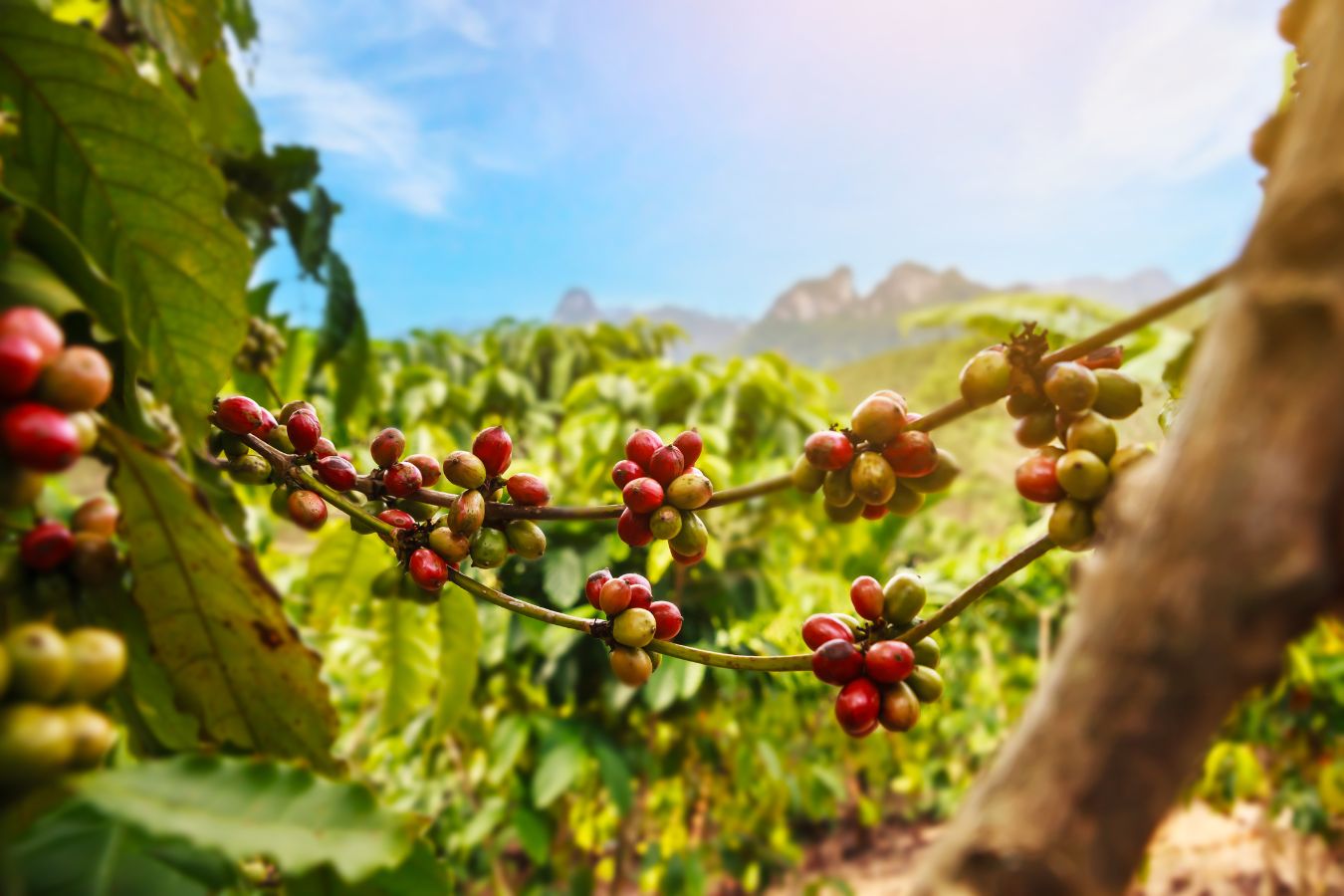 In the 1800s, Coffea Canephora – Robusta coffee was discovered in Congo – Belgium (Africa). Coffea canephora is a plant that grows in the Ugandan tropical forests around Lake Victoria. After coffee leaf rust (CLR) killed out the entire Arabica variety in Sri Lanka in 1869 (or 1867, according to Wiki) and affected most Arabica types, Robusta coffee was introduced to Southeast Asia in the 1900s. Estates in Java (Indonesia) in 1876.

Robusta coffee, which is popular in West and Central Africa, Southeast Asia, and portions of South America, including Brazil, now accounts for 30 to 40% of total global coffee production (where it is called Conillon).

Robusta trees are similar to other coffee kinds in that they grow as bushes but are more extensive, reaching up to 10 meters in height. As a result of the larger canopy size, Robusta coffee is produced at a lower density than Arabica. Robusta coffee is relatively easy to grow because its growth height ranges from 0 to 800 meters. On the other hand, Robusta coffee demands a lot of rain, between 2200 and 3000mm; therefore, it’s pretty drought-tolerant.

In comparison to Vietnam Arabica coffee, Robusta coffee offers a variety of advantages, including resistance to rust (CLR), stem borers, nematode infections, and a substantially higher yield. As a result, compared to Arabica types, the expense of growing Robusta is relatively low.

On the other hand, Vietnam Robusta coffee has several disadvantages, including its inability to withstand prolonged drought, low cold tolerance (optimum temperature is between 18 and 36 degrees Celsius), late harvest, and unpredictable production compared to Arabica.

Robusta coffee has long been inferior to Arabica since its flavor is more profound, tart, and bitter, especially in acidity, which is higher than Arabica. Vietnam Arabica coffees are often premium because they have a smoother taste, more robust acidity, and a richer flavor. Furthermore, Robusta coffee’s growing and processing areas mostly rely on dry processing (rather than wet processing like Arabica), resulting in a bitter taste, earthy fragrance, and burning when roasted.

On the other hand, Robusta coffee has twice the caffeine concentration of Arabica coffee to compensate for the loss of flavor (2 percent -2.5 percent versus 1.1 percent -1.5 percent ).

As a result, the combination of Arabica and Robusta coffee produces higher total quality than Arabica coffee; as a result, Italian coffees (Espresso) always include 10 to 15% Robusta coffee to increase the taste and flavor. Make the Crema layer more appealing. As production experience has shown, Robusta coffee can be of higher quality than standard Arabica varietals when processed wet (because Arabica has wide varieties and not all types are suitable). As a result, comparing Robusta with Arabica isn’t always accurate.

Robusta coffee has an earthy flavor and is often described as having a bitter, rubbery/grainy taste with a peanutty aftertaste. Doesn’t that sound unappealing? However, these flavors are not always present; even if they are, they are not always unpleasant.

It could be influenced significantly by the quality of the beans and how they are roasted. For example, I tried some Cannonball Coffee robusta, and while the beans smelled earthy, like raw potatoes, I didn’t notice it in the flavor of the brewed coffee. When brewed, it reduced to the consistency of molasses.

It had a bitter flavor, but bitter isn’t always a bad thing, especially if you like bitter dark chocolate, which is what I detected in this coffee. Robusta coffee beans contain more caffeine and less sugar than arabica coffee beans and thus taste stronger and harsher.

Robusta coffee is classified by sieve. The most common are still sieve 16 and sieve 18. Sieve 16 has a diameter of coffee beans (or sieve hole size) of 6.30mm, and sieve 18 is 7.10mm. In addition to the extent, other criteria also taken into account are grading according to moisture, impurities, broken black particle ratio, and particle-to-sieve ratio.

Robusta coffee in Vietnam is generally of equal quality and shares many commonalities due to the same farming practices. Or Vietnam also exports quite a lot of #13 sieved coffee #13 type R3 25% black broken too many large instant coffee factories in the world.