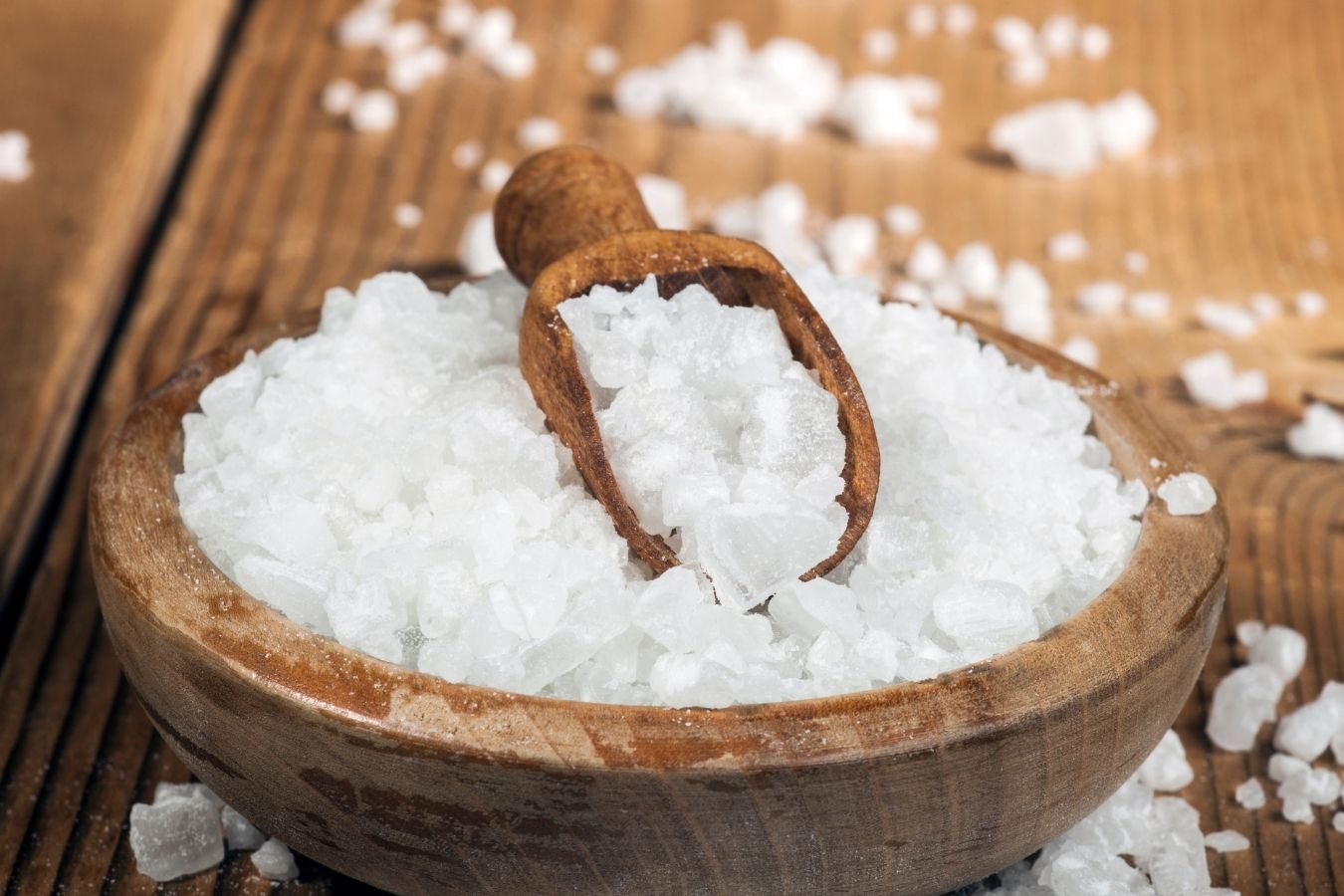 Should We Add Salt To Coffee? Some say that salt can be used for as many as 14,000 things. We use it to season and preserve food, clean greasy surfaces, and eliminate stains. Some people even use it as a mouthwash substitute.

Salt has been used in coffee for a long time in many different cultures. Some people have said for years that it is an excellent way to cut down on bitterness and bring out good flavours.

But not everyone agrees that these are good things. Many people don’t think of it as a way to improve the taste of coffee so much as a “hack” that makes coffee of lower quality taste better.

I talked to two experts about how bitterness, flavour perception, and salt affects extraction to learn more about the science behind adding salt to coffee. Find out what they said by reading on.

What’s The Point Of Adding Salt To Coffee?

Adding salt to coffee has been a common practice in many cultures for years.

In Turkey, for example, it’s common for the bride-to-be to make coffee with salt for her future husband and his family as a kind of informal pre-wedding ceremony. In the same way, “sea salt coffee,” which is iced Americano with salted milk foam on top, is a popular drink in Taiwan.

People in Northern Scandinavia have been adding salt to their brewed coffee for a long time. And finally, in coastal parts of Europe, coffee is often made with water with a lot of salt.

But why do people do these things?

The Coffee Excellence Center is a top public science, technology, and innovation centre. Sara Marquart is the Head of Flavor there. She says adding salt is a great way to balance the flavours of bitter robustas and coffees with very dark roast profiles.

“Adding salt to coffee makes it less bitter without adding anything else,” she says. “Salt brings out the natural sweetness of coffee and keeps the good smells. If people can’t handle bitterness, even in speciality coffee, they can add salt instead of milk and sugar.

In an episode of his cooking show Good Eats from 2009, food scientist Alton Brown suggested adding salt to coffee. He said you should add half a teaspoon of salt to each cup of water and two teaspoons of ground coffee to make the coffee less bitter.

“Salt not only cuts the bitterness, but it also removes the “stale” taste of water stored in a tank. “Research has shown that salt is better than sugar at taking away bitterness,” he said.

Brown wasn’t the first person to put salt in the coffee, but he brought a lot of attention to the idea. Some people even know it as “the Alton Brown Trick” today.

Green coffee doesn’t have these chemicals in it by itself. Instead, they are made when chlorogenic acids break down when coffee is roasted.

Phenylindanes are linked to how bitter something tastes and how long it has been roasted. The more phenylindanes there are, the darker the roast.

But extraction also affects how bitter something tastes. Overextraction can happen if you don’t make coffee with enough care. For example, if you let coffee sit in a French press for too long, use too hot of water, or choose the wrong grind size. This makes the coffee taste very strong and bitter in the cup.

Sara says, “The majority of bitter tastes are more noticeable in over-extracted coffee drinks.” “They have a rougher, more bitter taste than usual.”

We can tell the difference between sweet, sour, salty, bitter, and umami tastes with our taste buds, but our bodies react differently to bitterness than other tastes. Calcium ions are sent to the brain when we eat or drink something bitter. And while salt can make sweet, sour, and umami taste stronger, it tends to make bitter tastes less noticeable.

Sara says, “Bitter tastes turn on our bitter taste receptors, which tells our brain that we’ve eaten something bitter.” “Salt, specifically sodium ions, turn on salt receptors in our mouths.”

Sodium ions bind to the tongue’s salt receptors, stopping us from tasting bitterness. This keeps the flavours from being too strong or too weak.

“Cross-modal perception can happen when both the bitter and salt receptors are turned on simultaneously. This takes away the bitter taste and makes other tastes, like sweetness, stronger,” Sara says.

This means that the sweetness is naturally brought out when salt is added to coffee. Salt on the rim of a margarita glass brings out the sweetness of the lime and tequila.

How Should Salt Be Added To Coffee?

Two of the most common questions are when to add salt to coffee and how much to use. Sara says that you should add salt to your coffee grounds before you brew it, but not everyone agrees with her.

David Jameson is Bewley’s Tea and Coffee’s Head of Coffee and Sustainability. He tells me that every time he’s put salt in the coffee, it’s been at the end after the coffee has been brewed.

David says, “This is a much better way to control dosage.” “It might be best to pull a shot or make a cup of drip coffee first, taste it to see how bitter it is, and then start adding salt, increasing the amount until you get the perfect taste.”

James Hoffmann, a coffee consultant and World Barista Champion, has developed a plan that goes even further. Hoffmann made a solution with a fixed amount of salt that can be dripped into the coffee instead of adding salt crystals directly.

He found that adding 0.3g of a saline solution with a 20% concentration made a low-quality instant coffee taste and felt much better.

Sara says, “A pinch of salt (about 0.5g of salt for a 1L brew) could subtly make the coffee sweeter and less bitter simultaneously.”

Scott Rao, an expert on roasting coffee, found that adding 0.15g of salt per 100g of brewed coffee made both espresso and filter coffee taste the best.

How Come You Shouldn’t Add Salt?

People who put salt in their coffee often do so because they think it makes it less bitter and brings out the sweeter flavours. It’s important to remember that this doesn’t always lead to the best results.

David tells me that he knows from personal experience that salt in coffee is good but that it’s more important to pay attention to the quality of the beans you use.

“I put a few drops of a salt solution on it. This helped the judges understand how complex the acidity was, brought out the sweetness, and kept the bitterness in check.

“Given that, would I automatically add salt to my rare, fine Yemeni auction lot? Most likely not.

“Adding salt to bad coffee can help, but the best way to make it taste better is to use better beans.”

It’s important to remember that adding salt to higher-end speciality coffee can hide the subtle flavours that make it stand out.

When you add milk, cream, or sugar to coffee, adding salt to more complex coffees makes it harder to pick out subtle flavours or acidity in the cup.

“One of the things I like about good coffee is that it’s bitter in just the right way,” Hoffmann says in his video. “Some bitterness is very nice when balanced by sweet and sour tastes.”

Salt can make sweet flavours taste better and balance bitterness in the cup, but brewers who try it out should be careful. Like milk, cream, or sugar, salt can hide the unique qualities of higher-quality coffees, making it hard to tell what makes a cup unique or how complex it is.

Salt can be used to hide or balance out the harsher flavours of lower-quality coffee or darker roasts. For example, it can hide the sweetness of a light roast while bringing out the sweetness of a dark roast. But the only way to know what you like is to try different things. Try adding a pinch of salt to your coffee the next time you make it, and see what you think.