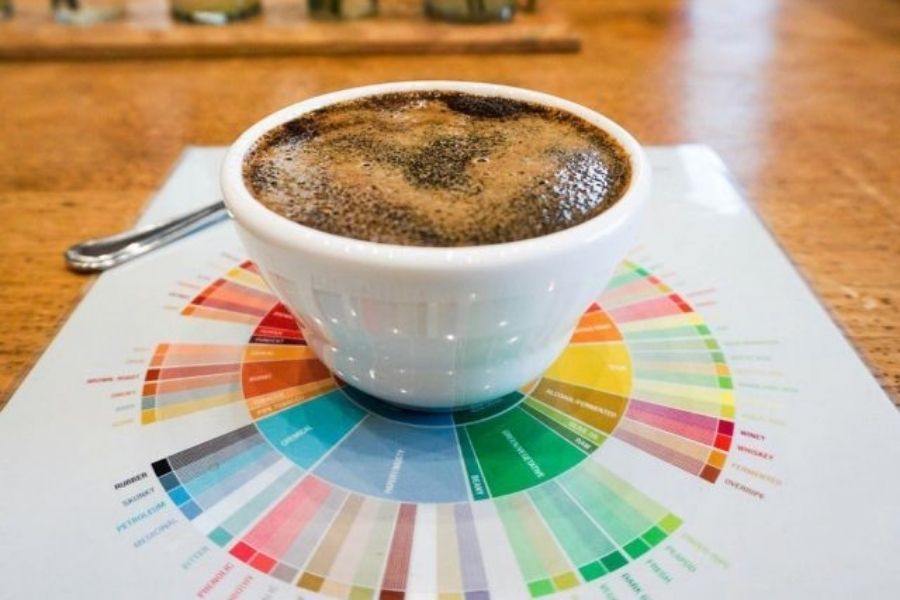 The Academics Of Acid In Coffee?

“Mm, this has a lot of cranberries, followed by a characteristic lemony acidic taste…mm… and red wine,” says the taster. On the right, there’s a barista. While taking notes in my notebook, I spoke loudly.

“Oh yeah, it’s definitely a bright orange, but it’s more like tangerine,” says the narrator. A barista to my left adds his two cents to the conversation.

I answer hesitantly, urgently, while pretending to be a passionate coffee expert to people around me, “Oh sure, it’s mandarin, must be from the citrus family.”

In fact, I was thinking to myself at the moment, “Who the hell are these freaks?” It’s only that the coffee tastes a little sour; it appears that I’m missing something.

That was my first cupping, which took place seven years ago. Like so many others, it took some time to understand the “Flavour Profile” (each different coffee will have its own “profile” about the growing location, preliminary processing type, etc.) (process), altitude above sea level, the overall expression of scent, acidity, sweetness, and body (like an ID card), and “Flavour Wheels”. To taste, all of them are, well, coffee. Sure, one person will taste a subtle sourness while the other will taste a harsh sourness, but they are still coffee.

After all, I believe it is simpler to envision the names of each coffee and the “Flavor Profile” that goes with it. That technique of removing a smidgeon of vulnerability in me is also a way of gushing for the next cupping, “really, I know what I’m talking about,” despite the fact that I didn’t feel anything at all. Cupping is a constant.
With such a depressing foundation, I determined that I needed to learn something before the next cupping (Hello!! that’s why I got here).

I want to know what it’s like to have fun in the most honest way possible, like many other cupping people around me, with a viewpoint rather than merely talking like a parrot.
That’s why I wanted to research food science and see what’s in coffee from a chemistry standpoint. This has sparked an interest in the amazing qualities of acidity, which will be of interest to us.
Here’s a recap of what I’ve learned so far, with an emphasis on putting it into practice in the way that makes the most sense to me. I hope that everyone learns something new.

Acid is a chemical that has a sour flavor to it when tasted. The Latin term “acid” literally means “sour.” The pH of an acidic solution is less than 7. The lower the pH, the more acidic the solution is. This is a natural product that may be found in a variety of foods and plants, including lemons, vinegar, yogurt, and, of course, coffee.

There are hundreds of distinct acids, many of which are well-known. ranging from citric acid to 4-mono caffeoylquinic acid, to name a few. However, for the purposes of this post, I will just discuss the most important acids that influence taste.

– The acid citric
Citrus fruits, as their name implies (citric refers to a member of the orange family), contain significant amounts of them. It accounts for over 8% of the dry weight of these fruits. This is arguably the most easily recognized and encountered acid among all the fruits.

-Malic acid is a type of acid that occurs naturally in the body.
Green apples are known for having this flavor (after all, it comes from the Latin word “malum” meaning “apple”). When looking for rhubarb in its purest form, this will be a prominent flavor.

Malic acid is commonly found in limes in the culinary world, however, it’s better to think of it as “a flavor of unripe fruit.” That is, the dosage of this acid decreases as the fruit ripens, therefore unripe fruits like grapes, kiwi, and gooseberries all contain malic acid.
-Tartaric acid is a kind of fatty acid

They’re most common in grapes, thus they’re abundant in this fruit. This acid, however, is not found there. Potassium bitartrate (also known as cream of tartar) is a salt of tartaric acid that formed during winemaking and is commonly used in baking and as a stain remover (remember to mix it with lemon juice or vinegar). White). This acid’s most notable feature is its caustic taste when tasted on the tongue.

This is also why saliva secretes excessively and leaves a dry, bitter aftertaste on the tongue’s tip. They’re the major ingredients of very sour candy bars, after all.

– The acid acetic (ethanoic acid)
This is a unique acid that has an odor similar to that of alcohol. It has a pleasant “sharp” lemon flavor at low concentrations, but it smells and tastes like fermentation in high quantities.
When this dynamic of scents and tastes is mixed with other flavors (particularly sugar), aromas like those found in wine or champagne emerge.
By now, you’ve probably gotten a fair sense of what acids are and how they taste.

But what does any of this have to do with coffee with an orange flavor? This is the simplest method to comprehend acidity; however, please keep in mind that acidity is an abstract notion. The term “orange acidity” does not imply that coffee tastes like oranges. Which indicates something along the lines of “Coffee is as sour as an orange.”
The notes in the coffee taste begin to make more sense if you suddenly mean this interpretation. Coffee that tastes “sour like blueberries” will be less sour than coffee that tastes “sour like lemons” since blueberries are less acidic than lemons.

I built a badly designed chart to represent the different fruits of the new pH indicators, in the hopes that it may be useful to everyone. Of course, you can delve even deeper into food science charts like the FDA’s (albeit they don’t focus much on coffee).

-The flavor and pH combination
You’ve probably observed that each fruit value listed matches each pH level, despite the fact that when you taste it, it tastes radically different. In theory, anything is possible. Let’s have a look at how a green apple and an orange function together.
In this scenario, we’ll use two types of acids that are found mostly in these two fruits: malic acid in the green apple and citric acid in the orange.
Start by visualizing yourself using a light roasted African coffee bean (coffee beans can be roasted in three different ways: light, medium, and dark). Each roast degree has an impact on the others. smells and flavors of coffee). The appropriate pH when we brew this coffee bean and measure the pH is 4.6. Then we examine the model above to determine whether fruits are apples, peaches, plums, pineapples, and so forth. Then you drink the coffee and notice how the aftertaste leaves a dry, acrid residue on the tip of your tongue, which is a sign of acidity. tartaric.
You believe it has “grape acidity” or a sour flavor similar to that of stone fruits like cherries and plums. Next, you detect an acidic wine within it, implying a combination of “grape acidity” and powerful acetic acid yeast flavors.
Similarly, a citrus flavor with a low pH is referred to as “lemon acidity,” whereas a higher pH is more akin to an orange flavor.
Low quantities of malic acid are often mistaken for lime flavors, and higher concentrations can be mistaken for rhubarb, green apple, or other citrus flavors. grape. Cupping will be a lot easier once you grasp this. Forget about the details and focus on the core of the issue.
– How to develop an “excellent” sense of taste
Always practice cupping skills with a variety of flavors derived from various species. Nothing can help you refine your taste receptors more than experimenting with various acids.
I’ve bought samples of pure acids combined with 1-2 percent each in distilled water in the past. Because it is unaffected by other flavors such as sweet or bitter, the end effect is truly unique. After you’ve felt each form of acidity’s integrity.
Test for acidity
Then I started experimenting with meals, putting fruit, vinegar, and even wine on a large dish and analyzing each acid in them.
Experiment with different coffees and fruits
I began by experimenting with foods, using a large dish of fruit, vinegar, or even wine, and analyzing each of the acids in each of them.