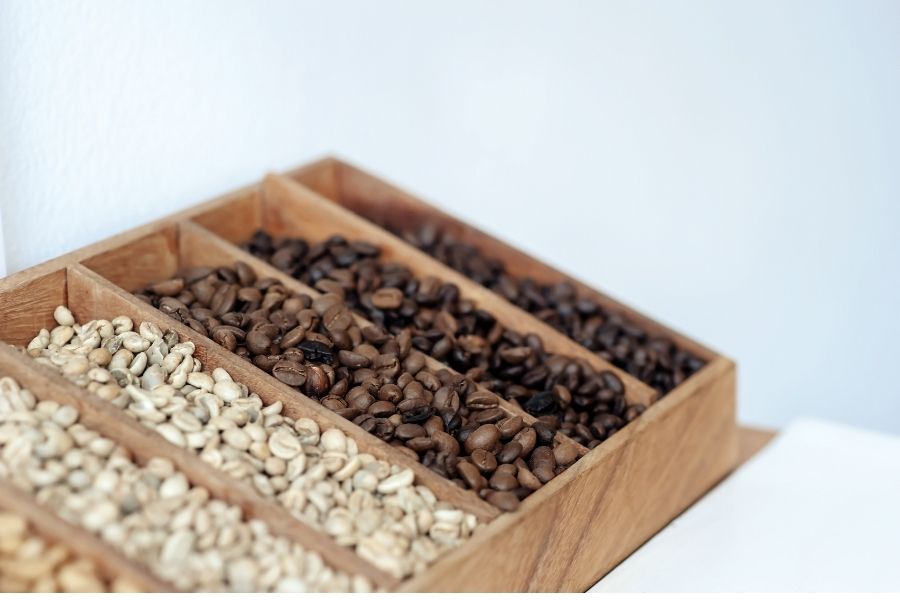 Types of Coffee Roasts? Have you ever wondered why each coffee package is constantly labeled with Light roast, Dark roast, Medium Roast, and even Vienna Roast, French Roast, or Italian Roast… why there are so many roasting degrees, and what is the real difference between them?

Raw coffee beans have a “grassy” scent and little or no taste associated with “coffee” before being roasted. So it’s no exaggeration to say that “coffee” is this bean’s post-roast idea. The roasting process changes each bean’s potential flavor qualities into the real flavors we taste in the cup.

Although various changes to coffee occur during roasting, such as color change, texture swelling, mass loss, flavor change, and so on, the most frequent way to describe the roasting process remains the same. The color of the beans determines how coffee changes during roasting. The color of coffee beans darkens as they absorb heat during roasting, from green to yellow, brown, dark brown, and finally char. Natural oils can also be found on the beans’ surface. at a high temperature and clearly distinguishable

During the roasting process, each type of coffee has a particular color change.

Because each coffee variety has intrinsic variances, it is impossible to fully “see color” in order to describe it accurately. To determine how far a coffee has advanced, we must combine a standard roasting temperature frame with natural physical differences such as cracking during roasting. During the roasting process

“There is no clear and exact classification system for coffee during roasting,” it should be stressed. And depending on the features that are changed, each section of the world has a different name for the stage at which the coffee is taken out of the roaster. It’s difficult to understand the differences between the stages of the roasting process. The following terms are provided as a guide only; you may come across various synonyms.

This is an extremely beans light roast method, with the roasting process ending before the first bang. As a result, the coffee has a very sour, fresh flavor, with a strong aroma of plant resin and a very light body tone. Because coffee is rarely roasted in this manner, it is not regarded as a formal stage.

Light roasting is when coffee is removed from 195oC to 205oC as soon as the first crack emerges (first crack) (385oF to 400oF). Because the green coffee beans retain their original flavor (Bean flavor) and have not been tainted by the roasting process, this roast is typically used for Cupping (Roast flavor). The flavor of fruits,  beans, is more sour, sweet, and very little bitterness can be detected when tasting the seeds at this roast degree.

Light roast beans , also known as City roast, is a roasting degree prevalent in the Nordic countries and growing in popularity in the third wave of coffee.

Half City Roast, Light City Roast, and New England Roast are some alternative terms for a light roast.

The phase between two spurts of coffee is known as medium roast (or Full city). Full City, according to Scott Rao, is the stage before the second explosion when the beans have produced a large amount of shine on the surface, the taste is pleasing, and the balance between the attributes is exactly right. Medium is a good choice for espresso since it has a good combination of acidity, sweetness, bitterness, and body.

This stage is known as Viennese because coffee is removed in the first seconds of the second explosion when the temperature rises from 205oC to 232oC. (500oF to 450oF). One of the regular Starbucks roasts, with dominant grain characteristics and a high degree of consistency since the coffee, has almost lost its particular flavor attributes.

This is the roast to choose if you want a bitter espresso with a heavy body, low acidity, minimal sweetness, peppery, caramel highlights.

When the second crack (second explosion) occurs after 30 – 60 seconds, the coffee is removed. The coffee roast will have a strong bitterness with this roasting, the smoke, carbon, or tobacco flavors will be prominent when brewed, the sweetness and sourness will be gone, and the body thickness will also prevail.

In the Dark Roast range, there are numerous smaller stages, each categorized by “bold,” such as Vienna Roast, French Roast, and Italian Roast.