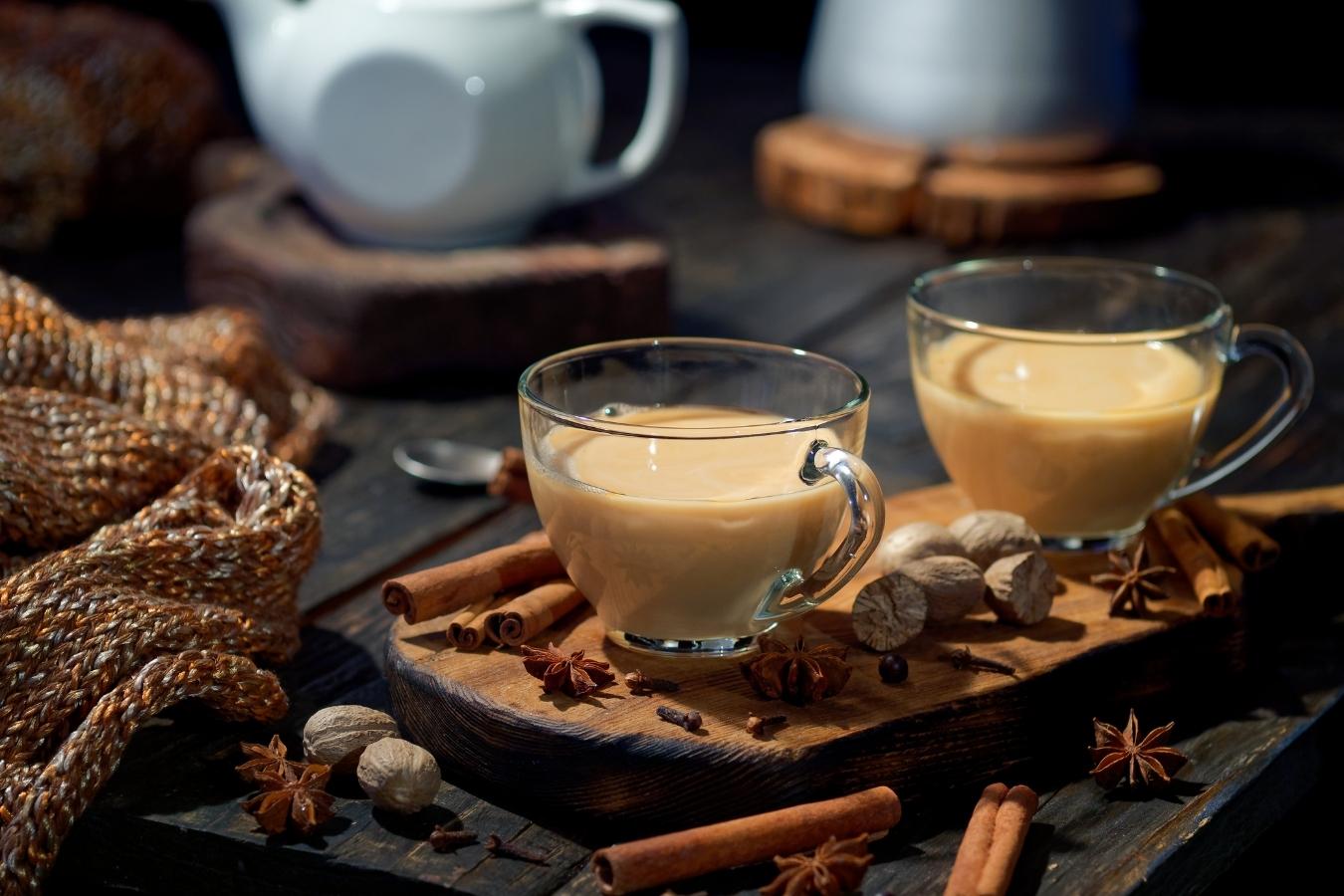 What Is A Chai Latte? The Difference Between Chai Tea And Chai Latte – The chai latte is a hot, milky, aromatic, somewhat spicy beverage that is common in cafés worldwide. Despite being named after the Latte and offered at coffee shops, it has no coffee.

One of the oldest tea-based beverages in existence is Chai. Over the past two centuries, it has expanded around the globe from its ancient origins in India.

However, there is still a significant mystery: how did a beverage consumed in India for thousands of years become so widely available on coffee shop menus?

Chai latte tea is a popular drink in India with a distinctive warm taste, thanks to the combination of tea with many spices. Chai latte tea has many health benefits, especially helping to prevent colds and flu during changing seasons.

Can you tell the difference between Chai tea and Chai Latte? As usual, drinking both of these drinks will be challenging to recognise, but for the tea enthusiast, there are distinct characteristics.

Here is a description of a chai latte, how it originated, and what the future may hold.

What is Chai Tea?

Chai Tea, also known as Masala Chai, is made with black tea, a blend of Masala spices, water, an optional sweetener, and buffalo or cow’s milk.

Chai tea is said to have been around for 5,000 years when a king requested an Ayurvedic spice to cure a cold.

However, it was not until thousands of years later, when the British planted tea farms across India, that black tea, milk and sweeteners were added to the recipe.

What is Chai Latte?

Compared to Chai tea, Chai Latte usually has much more milk. In addition, although there is the word Latte in the name of the drink, they contain very little coffee, although some places can add more Espresso to create a new dish called Dirty Chai Latte.

Chai is the Hindi word for tea, and Latte is the Italian word for milk; in simple terms, Chai Latte is tea with milk. Masala chai is the tea used, prepared with a combination of spices. This sweet drink is perfect for keeping you warm in cold weather.

The Starbucks brand introduced an upgraded version of Chai tea, Chai Latte, in the 1990s. After it became widely available, it was available in many parts of the world in bottled or pre-packaged tea.

A Chai Latte: How Is It Made?

Steamed milk and black tea that has been spice-infused are combined to create chai lattes. Foam is subsequently placed on top of the beverage.

Different coffee shops will use different spices; some will make their proprietary chai blends and keep the ingredients a secret. Others, however, will use a powder or chai syrup that has been sweetened to prepare the beverage as needed rapidly.

The difference between Chai and Chai Latte

Here is a table of the differences between these two drinks for you to imagine:

The essential spices in the Masala blend are cinnamon, cardamom, ginger, cloves and pepper. This blend determines the taste of Thai tea.

Besides, the type of milk commonly used for traditional Chai tea is buffalo milk. As for Chai Latte, the same ingredients are available, but you can add some other elements such as mixed with nut milk or chocolate, Espresso, vanilla or mint.

Unlike coffee or cocktails, there is no required recipe or ingredient to make Chai or Chai Latte. The primary difference between the two is the percentage of milk.

You can make Chai tea with or without milk. Even if milk is present, it will not exceed the brewed tea portion. But in Chai Latte, milk makes up more than half of the drink, even more than ¾.

Chai tea is milky brown, has a light consistency, and sometimes you can see a lightweight milky foam on top. In India, it is traditionally served in clay cups.

On the other hand, Chai Latte has a more golden colour with a creamy texture due to the high amount of steamed milk, with a thick foam on top. It can be enjoyed cold or iced.

If you wonder what traditional Chai tastes like, the tea and spice flavours will be stronger and more pronounced due to the light milk content.

On the other hand, Chai Latte has a milder taste and richer texture due to its high milk content. Chai latte can be the base flavour for many drinks, including bubble tea.

Chai Latte can come in various flavours like pumpkin spice or Eggnog Chai Latte. The combination is often the taste between the East and the West. As for traditional Chai, each family or coffee shop will have a different flavour or type of milk.

How to make Chai Tea and Chai Latte at Home?

How to make Traditional Chai

How to make Chai Latte

The steps to making Chai Latte are similar to Chai but do not add milk while boiling; instead, whip the milk. Proceed as follows:

History Of Chai Latte And Chai

Since many thousands of years ago, Chai has been cultivated in India in the form that the West is familiar with. The Hindustani name for tea, produced in the Assam region for ages, is where the phrase Chai first appeared.

When discussing Chai in chai lattes, we refer to masala chai as a concoction of black tea and spices. Black tea is steeped in water to make masala chai, which is then combined with milk, sugar, and ginger.

However, other herbs may be used, such as cardamom, cloves, cinnamon, and peppercorns.

Between 5,000 and 9,000 years ago, the Indian subcontinent was where masala chai is said to have first appeared.

According to some legends, it was first consumed at a royal court in Siam as a beverage related to the alternative medical system of Ayurveda, which dates back to ancient India.

In the past, herbal mixtures, minerals, and metals were used in Ayurvedic medicines to relieve disease or discomfort.

Masala chai is currently made from scratch in India and may be consumed at home or on the go. Street merchants, or “chaiwallahs,” prepare and sell it from booths throughout the day.

In a pot with crushed leaves, it is frequently prepared. After boiling, it can be strained to eliminate any chunkier pieces.

Older versions of masala chai merely had black tea mixed with various spices and herbs. Only in the 1800s, as a result of British colonial influence in India, was milk added.

The British East India Company created many plants to generate a supply of tea they owned to challenge the Chinese monopoly on the beverage.

Tea or Chai was not widely consumed locally until British-funded advertising efforts urged Indian businesses to provide “tea breaks” for their staff.

Because even low-quality tea leaves are expensive, milk and spices were soon added to the beverage to lengthen its flavour.

India now consumes more than 800,000 tonnes of tea annually. For every cup of coffee, an estimated 30 cups of chai drinks. In addition, each person consumes two cups of Chai on average daily. Chai is cooked differently throughout India. Given that the cow is revered in Hinduism, it is typical to see it served with buffalo milk. – Perfectdailygrind

The chai latte’s history is a little less clear. There is no concrete information on when it first appeared in Western coffee shops, although it is said to have done so in the 1990s.

In the last 10 to 15 years, it has become increasingly popular. Most large coffee shops, such as Starbucks, Dunkin’ Donuts, Costa Coffee, and Tim Hortons, now sell it.

Changes To The Modern Chai Latte

The contemporary chai latte is a popular beverage. According to Sebastiaan, no clear-cut demographic or group favours it. There is “no actual differentiation between folks who order tea.

Defined variants are less prevalent because every coffee shop makes chai lattes using a different formula. Changes to the kind or quantity of spices are typically made to the chai blend.

One “variant” of the chai latte is notably more popular than the others. An espresso shot is added to a chai latte to create the “dirty chai.” This is thought to have been accidentally produced in London in the 1990s.

The article Helena Coffee has fully introduced information about two types of traditional Chai and Chai Latte. Each class offers different unique flavours if you have the opportunity to try both to compare and choose your favourite drink.

If you want to order the spices in this drink or the ready-to-drink Indian milk tea, visit Helena Coffee Vietnam now.