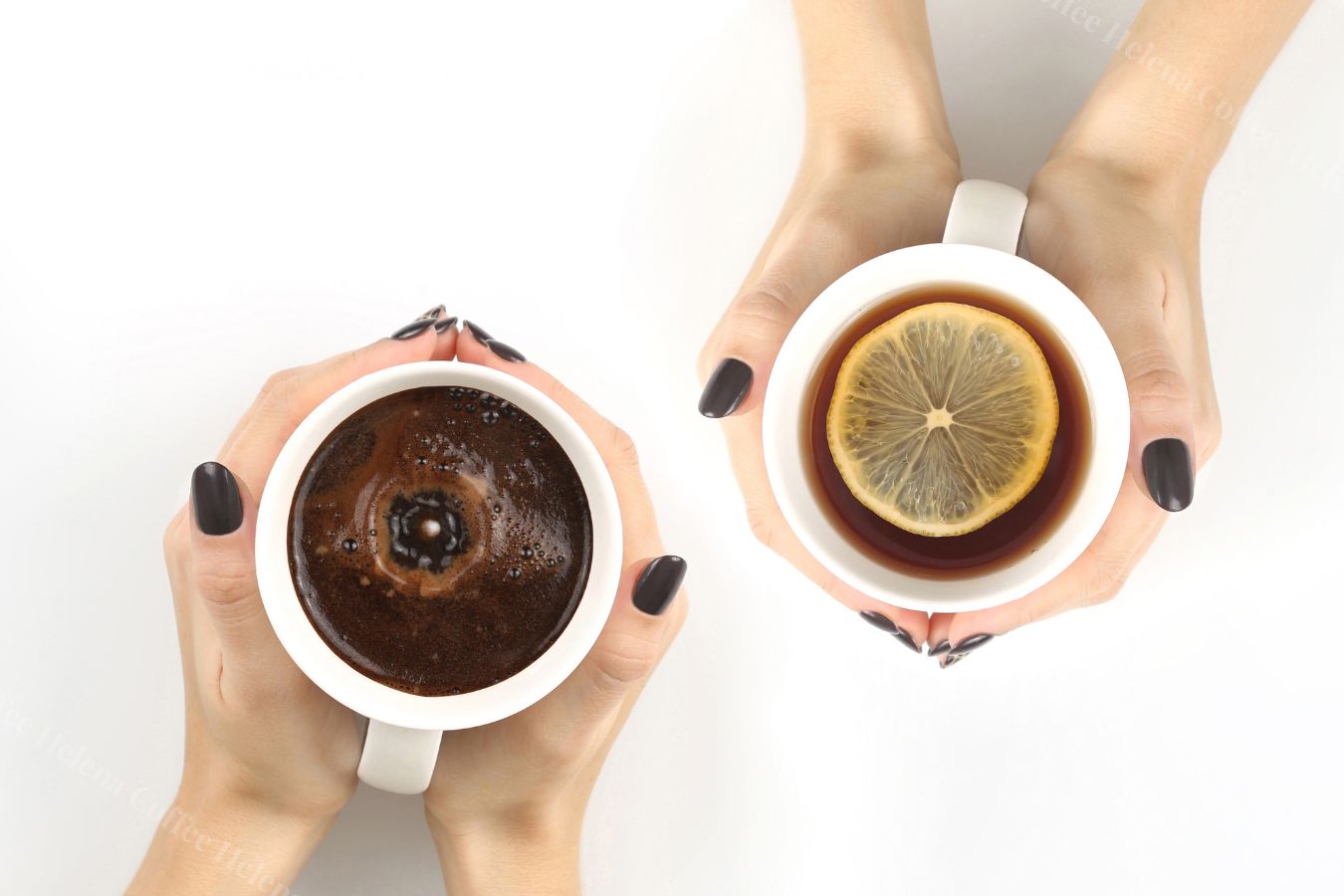 Is Green Tea More Caffeine Than Coffee? – For good reason, coffee and tea are frequently compared. Both have centuries of history, are appreciated globally, are derived from plants, and may be consumed hot or cold.

Coffee is often thought to have far more caffeine than tea. A short Google search reveals that 100ml of coffee has 40mg of caffeine, whilst the same volume of “tea” contains just 11mg.

In terms of caffeine, though, one sort of tea stands out above the rest: green tea. Green tea leaves can contain far more caffeine than other forms of tea, depending on how long they are steeped and where they originate from.

You might also be interested in our post on the world’s most caffeinated coffees. Caffeine is known as a stimulant commonly found in tea and coffee.

This substance stimulates the brain and central nervous system, helping stay awake and prevent fatigue. If we compare the caffeine in tea and coffee, which one is higher?

What Exactly Is Green Tea?

Tea is the second most popular beverage in the world (after water). It is made by steeping the leaves, buds, or twigs of the tea plant (Camellia sinensis) in boiling water for a few minutes to several hours.

Before we go into which drink has the most caffeine, let’s define green tea. The Camellia sinensis plant is used to make green tea, while other sections of the plant are used to make different tea varieties.

Green tea is a tea that has had its enzymes deactivated. This indicates it doesn’t oxidise. To avoid oxidation, it has been steamed or pan-fried. This distinguishes it from black tea, oolong tea, or any other form of tea.

Because of its absence of oxidation, it is classified as green tea. Furthermore, several methods exist for keeping it green depending on where tea is grown. Steaming is the most common method in Japan, whereas pan-firing is used in China.

However, green tea is a broad phrase, and each green tea is distinct according to its growing methods, harvesting dates, and processing processes.

Caffeine is a natural stimulant found in more than 60 plant species and many different foods and drinks, especially coffee, chocolate, energy drinks, and tea.

The caffeine content in each beverage depends on the ingredients and the preparation and manufacturing process. While caffeine is generally safe and has some health benefits, consuming too much can be harmful.

Effects Of Caffeine On The Body

An estimated 80% of the world’s population enjoys caffeine-containing products daily. Safe caffeine consumption is a maximum of 400 mg per day, 200 mg at a time, or 3 mg per kilogram of body mass.

Because of its psychostimulant properties, caffeine has several effects, such as creating a feeling of alertness, enhancing athletic performance, improving mood, and boosting metabolism.

However, excessive amounts, such as over 500 mg daily, can cause some problems. In large doses, caffeine can cause anxiety, restlessness, and trouble sleeping.

Additionally, some research suggests that consuming caffeine too often, even when consuming only moderate amounts, can cause chronic headaches and migraines.

Furthermore, caffeine is a mildly addictive substance, and some people can be prone to becoming dependent.

Summary: Caffeine is a stimulant compound in many foods and beverages, including coffee and tea. Caffeine has several health benefits, but consuming too much can cause several problems.

The amount of caffeine in tea and coffee varies widely, depending on the drink’s source, type, and preparation.

Tea leaves contain 3,5% caffeine, while coffee beans contain 1,1-2,2% caffeine. However, the brewing process uses hotter water, so more caffeine is extracted from the beans. Moreover, the coffee needed for each brew is more than tea leaves.

Therefore, 1 cup of black coffee (237 ml) usually contains more caffeine than a cup of tea of ​​the same volume. However, the amount of caffeine in tea and coffee depends on the type of tea/coffee and how it is prepared.

A small cup of home-brewed coffee can contain 50mg of caffeine, while a sizeable 473ml cup at Starbucks can contain more than 300mg.

You can replace it with sencha or matcha tea and still feel like drinking fresh tea, and 1 litre of water only needs about 10 grams of tea.

Tea also contains small amounts of 2 other alkaloids, theobromine and theophylline, which have muscle-relaxing properties, making the body feel easier to breathe.

According to a study by the department of food technology and biotechnology, University of Zagreb, Croatia, white tea contains the highest amount of caffeine (4.55%) and mate tea the lowest (1.05%) and oolong tea from 2.04% (green tea) to 3.86% (black tea).

In addition to caffeine, tea also contains small amounts of two other alkaloids, theobromine and theophylline, which have muscle-relaxing properties, making the body feel easier to breathe.

Besides, tea also contains the amino acid L-Theanine, calming the brain and creating a feeling of relaxation for the central nervous system. Coffee does not include these substances.

Which Tea Or Coffee Is Better?

The caffeine content of coffee is usually higher than the amount of caffeine in tea. Depending on the source of the raw materials that make tea and coffee, the processing and processing methods also affect the increase or decrease in caffeine content.

It isn’t easy to give an exact answer as to which coffee or tea is better. The best way is depending on the taste of each person that you can choose coffee or tea to drink, but drink it sensibly, and the amount of caffeine in the day should not exceed 400mg a day.

How Important Is The Caffeine Content In Green Tea?

While coffee is well-known and adored worldwide for its caffeine level, green tea has a slightly distinct market. However, like with coffee, knowledgeable green tea users value its unique blend of texture, flavour, and scent.

Green tea contains catechins, which have health advantages. There is a lot of good work being done, especially on the epigallocatechin gallate (EGCG)

One of the primary reasons for green tea’s reputation as a healthy beverage is assumed to be its anti-inflammatory and antioxidant properties.

There are several categories of customers. Some people prefer the antioxidants in green tea for its health benefits, while others desire the caffeine and L-theanine combo.” Many folks only appreciate the flavour. There are several reasons to drink green tea.

Green tea and coffee are frequently compared because of their similarities. While a cup of brewed coffee will almost always contain more caffeine, it’s important to note that both beverages’ caffeine levels vary greatly.

This is determined by various elements, including harvesting, roasting, processing, species (for coffee), and how each beverage is made.

Black, green, and white tea are all made from the leaves of the Tea tree (Camellia sinensis). What makes the difference is the time of harvest and the degree of oxidation of the tea leaves.

Black tea leaves (aka red tea) undergo oxidation, while white and green tea leaves do not. This gives black tea its rich flavour and distinctive colour and also increases the amount of caffeine from the tea leaves entering the tea.

How To Make Tea

The brewing method dramatically affects the caffeine content of the tea. The longer the tea leaves are brewed, and the hotter the water is used, the more caffeine is in the tea.

The average cup of coffee (237 ml) contains about 95 mg of caffeine. Dark roast coffee has a higher caffeine content than light roast coffee.

Although caffeine is not significantly affected by the roasting process, and this difference is negligible, dark roast coffee usually has a lower density of beans than light roast coffee, so each brew will use the amount of coffee powder. More, so the amount of caffeine in the finished product will be higher.

How To Make Coffee

The hotter the water is used, the more caffeine from the tea leaves will enter the water, and so will the coffee. Coffee is usually brewed with more scalding water than tea; the ideal temperature is 90 – 96°C.

Coffee can also be made with cold water using the Cold Brew technique. This technique breeds coffee powder in cold water for 8-24 hours.

Should I Drink Tea Or Coffee?

Caffeine works quickly, usually within 20 minutes to 1 hour of consumption.

People sensitive to caffeine’s effects should consider choosing low-caffeine teas, such as white or herbal teas, or can also use high-caffeine teas brewed only for a short period. Short time, such as 1 minute instead of 3 minutes as usual.

Decaffeinated tea or coffee is also a solution to enjoy these drinks without loading too much caffeine into the body.

Conversely, if you are a lover of high-caffeine drinks, you can choose traditional black coffee, cold brew and high-caffeine teas, such as matcha green tea and black tea.

People with cardiovascular disease, migraine headaches and taking certain medications should limit caffeine consumption as much as possible.

Pregnant or nursing women should consume no more than 200 mg of caffeine daily, about one cup of coffee or four cups of black tea. However, many health experts say pregnant women should not consume caffeinated beverages.

The type of tea/coffee and the way it is brewed are factors that affect caffeine content.

Black tea and coffee contain the most caffeine, followed by green tea with moderate caffeine. The caffeine content in white teas is quite different, while herbal teas have almost no caffeine.

If you want to reduce caffeine intake, choose low-caffeine teas, brew tea for a short time, and choose decaffeinated coffee. Even if you can drink caffeine, you should not consume more than 400 mg daily.