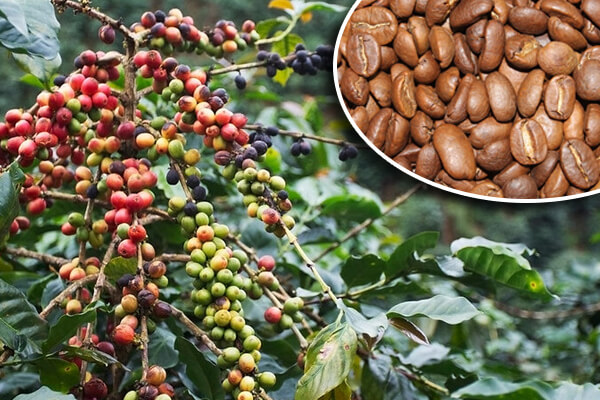 What is Catimor? I wanted to answer a “simple” question: “Is Catimor Arabica or Robusta?” So I wrote this essay.

Coffee Leaf Rust seriously harmed most Arabica coffee grown in Asia around the end of the nineteenth century. Rust moved from Sri Lanka to coffee farms in Java and Sumatra (Indonesia).
The Dutch experimented with other Arabica cultivars, but only Robusta proved to be the most disease-resistant. For nearly 30 years, until the 1930s, Robusta coffee accounted for more than 90% of all coffee produced in Indonesia. There are still some old Typica plantings, but the number of rust-resistant trees is small.
A natural hybrid between Typica and Robusta, known as Hybrid de Timor (HdT, or Timor Hybrid), was discovered in East Timor (then an Indonesian island) in 1927 (other sources indicate 1917).
What is the significance of HDT? Because of the significant variances in flowering time, pollination period, and chromosome structure, distinct species frequently cannot pollinate one other. Robusta coffee is a diploid species with 22 chromosomes divided into two groups (chromosomes). Arabica is a tetraploid species with 44 chromosomes divided into four groups. Robusta requires cross-pollination, whereas Arabica is self-pollinating.
Although Arabica is considered a ‘child’ of Robusta (most experts agree that Coffea canephora x Coffea eugenioides yields Coffea Arabica), the next generation often loses its ability to reproduce because the scrambled genome is so big. HdT, on the other hand, not only retains some of Typica’s flavor and Robusta’s pest and disease resistance, but it can also pollinate and generate the next generation.
HdT, for example, has 44 chromosomes. This suggests that this hybrid can cross with additional Arabica types in the future. In coffee breeding, HdT creates a revolution.
HdT seeds are transferred from East Timor to Portugal’s Centro de Investigaço do Ferrugens do Cafeeiro (CIFC). Scientists crossbreed some of the most disease-resistant HdT plants with Caturra to develop novel hybrids with names like HW26 and H46.
Catimor, a cross between HdT and Caturra, was first developed as an experiment in Brazil before swiftly becoming popular in coffee-growing regions throughout South America. Other South American countries have begun to experiment with self-breeding HdT with Caturra to develop novel hybrids comparable to Catimor. To create a Sarchimor combination, the HdT was crossed with Villa Sarchi.

Catimor isn’t only a type of coffee…

There are a few remarkable Catimor kinds

.
It will be much easier to read Coffee Family Tree if you better understand the Catimor group.
The authors provide brief information on provenance and provenance for each variation described. As a result, rather than only looking at the Canephora-related information box, one should carefully examine the purple box’s unique information about the coffee kinds. The majority of the coffee cultivars listed are HdT, Catimor, or Sarchimor hybrids.

“Is Catimor Arabica or Robusta?” is a common question. Believe there are only two types of coffee: Arabica and Robusta. There are hundreds of coffee species, with dozens or hundreds of variants within each species. Furthermore, crossbreeding across varieties and even species has occurred and continues to happen in the wild and in the laboratory.

I hope this post has answered the question “What is Catimor?” for you. Catimor is a term that refers to a group of hybrids, not just HdT x Caturra. The new researchers generated a range of coffee kinds with good flavor and disease resistance based on the HdT x Caturra mix, allowing the coffee industry to grow.

For example, Tabi, a HdT x Typica x Bourbon hybrid, is not only rust-resistant but also delicious. Catimor is commonly regarded as a secondary Arabica bean, lacking the flavor of Typica, Bourbon, or Ethiopian landraces. Still, its significance in the coffee revolution and modern research cannot be overstated.