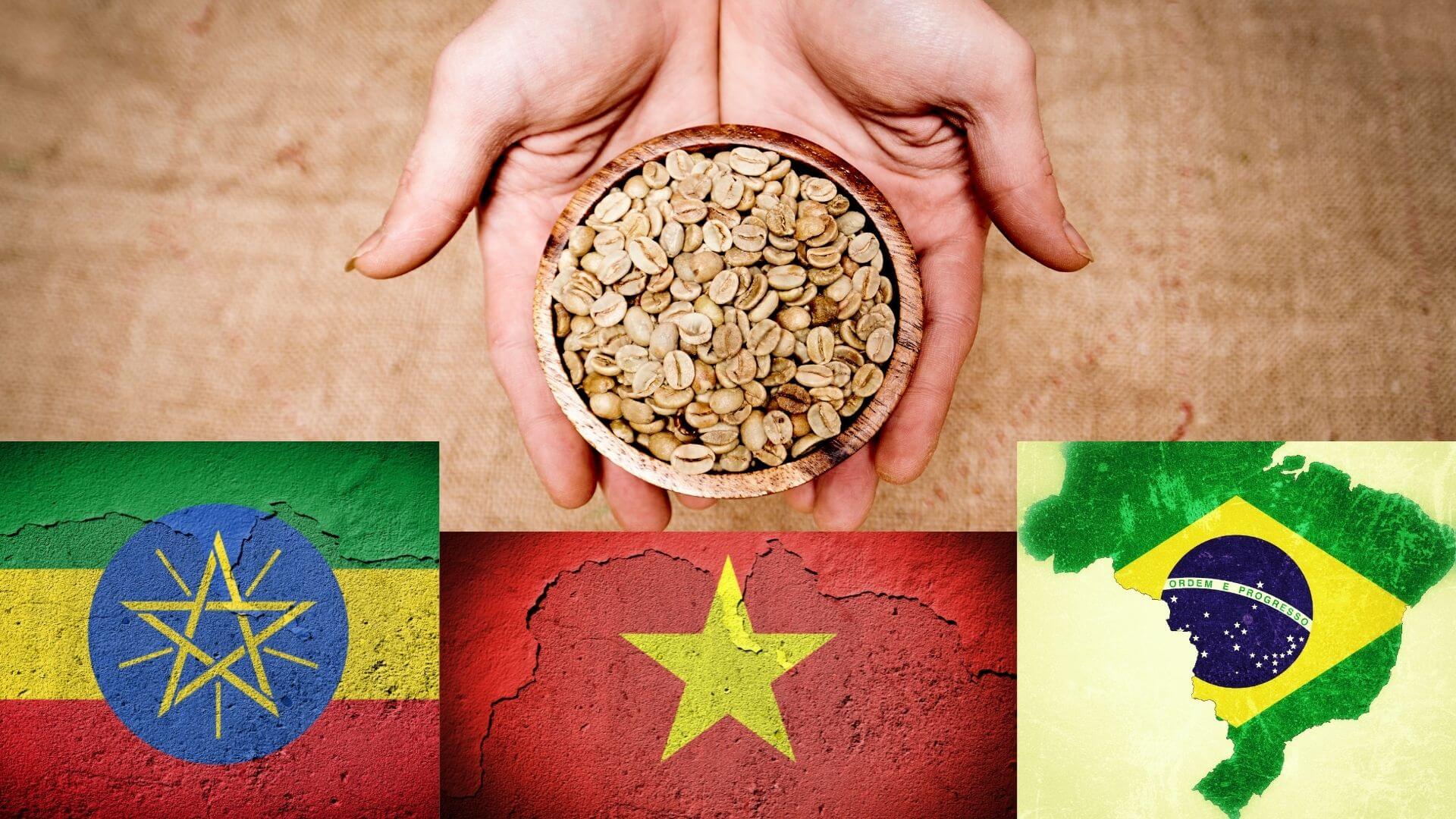 For more than 150 years, Brazil has been the world’s largest coffee grower. Brazil now produces approximately a third of the world’s coffee, compared to an 80 percent share in the past.

When Brazil was still under Portuguese administration, coffee was brought to the country from the French colony of Guiana in 1727. Francisco de Melo Palheta planted the first coffee tree in Brazil in the Para region in the country’s north.

Palheta went on a diplomatic mission to the French province of Guiana, where he seduced the governor’s wife and was handed coffee seeds disguised in a bouquet by her before he left, according to historians.

When he came home, he only planted coffee for domestic consumption, and it remained a minor crop until it began to spread south, being carried from garden to garden, farm to farm, and across numerous crops.

Commercial coffee cultivation began around the Para ba River (near Rio de Janeiro). The region is perfect for coffee production because of its ideal soil and its proximity to Rio de Janeiro’s port, which will facilitate exports.

Unlike the modest coffee fields that had thrived in Central America, Brazil’s initial commercial farms were enormous plantations with slave labor.

The scale of production (free shipping)

Brazil grows both Arabica and Robusta coffees, with Arabica dominating the market and Robusta accounting for around 85% of the remaining production. Arabica cultivation in Brazil is centered in the national coffee regional cluster, which Rio de Janeiro leads.

Meanwhile, Robusta coffee is primarily farmed in smaller states such as Espirito Santo (which produces 80 percent of all Robusta coffee) and Rondonia in the northwest.

They have always seen coffee as more than just a product; for them, the worldwide coffee trade is a work ritual, a means of connection, and an involvement factor.

We became one of the largest exporters of Arabica coffee in green beans in Brazil in the “Superior” and “Comercial” lines because they are a coffee firm for coffee people: growers, buyers, partners, roasters, and consumers.

Atlantica will have commercialized over 2 million bags by 2020, with over 40 countries on all continents receiving them.

The coffee products are selected, refined, stored, and transported in a modern structure from the Montesanto Tavares Group and partners with high-tech machinery, operated by highly qualified professionals, under the slogan: from person to person in the coffee world, seeking the best results for everyone.

History of coffee in Ethiopia

Ethiopia is the birthplace of coffee, according to 2.1 development history. Humans were the first to consume it, initially as a fruit rather than a beverage. Yemen was the first country to cultivate coffee as a “crop,” but it had long been gathered from Ethiopia’s natural forests.

Ethiopian coffee was possibly initially exported in the 1600s. As coffee plantations popped up in Yemen, Java, and eventually the Americas, European traders’ interest diminished.

Ethiopian coffee was produced primarily from wild coffee trees growing in the Kaffa and Buno districts at the time rather than from plantations.

According to The World Atlas of Coffee, Ethiopian coffee regained popularity in the early 1800s after a “record” export of one hundred quintals. Harari (grown near the town of Harrar) and Abyssinia (grown around the town of Abyssinia) were the two most popular Ethiopian coffees in the nineteenth century (extended from the rest of the country). Harrar has a long history of being attractive and of high quality due to this.

Smallholder farmers harvest most Ethiopian coffee, which is then processed at “co-op washing stations,” also known as Microregions. Farmers will deliver their coffee to the nearest processing center, where it will be pooled with the coffee batches of other farmers and weighed and processed before being exported. It gives the coffee more traceability at the farm level and makes it easier to sell.

It is the birthplace of acceptable coffee types. Despite the lack of well-known local brands of bulk green coffee beans, Ethiopia invites many other well-known retailers worldwide to process and export coffee.

Olam Specialty Coffee (part of Olam Coffee, which is part of The Olam Group olamgroup.com) is one of the most well-known and distinguished brands.

The Olam Group is in charge of the global supply chain for over twenty agricultural products. We have access to The Olam Group’s broad international logistics, risk management, and coffee network due to our partnership.) or coffee from the Grand Paradé. These companies offer high-quality, low-cost coffee from Ethiopia’s coffee farms.

Vietnam – Asia – The culture of a special filter coffee

Arabica (Coffea arabica) was the first coffee varietal brought to Vietnam by French missionaries in 1857.

It was first tried in Catholic churches in northern provinces, including Ninh Binh, Thanh Hoa, Nghe An, and Ha Tinh, before spreading to center areas like Quang Tri and Quang Binh. Finally, coffee was introduced to the Central Highlands and Southeast provinces in the south.

The Central Highlands were eventually proven to be the best site to cultivate coffee.

The French then introduced two further species of coffee to Vietnam in 1908: Robusta (Coffea canephora) and Exelsa (Coffea arabica). The French experimented with many Congolese types in the Central Highlands without pausing, witnessing the rapid growth of coffee in this region.

In the late 1990s, Vietnam overtook Brazil as Southeast Asia’s major coffee grower and exporter and the world’s second green coffee producer and exporter. However, Robusta beans account for the majority of production.

While Robusta types account for 92.9 percent of total coffee-producing land, Arabica variants account for only a tiny percentage of the overall output in Vietnam, accounting for less than 5% of the total production.

Vietnamese coffee is grown at altitudes ranging from 500 to 1,200 meters above sea level, giving it a delicious aroma to restrict the spread of mass farming while improving the quality and profitability of coffee production.

The government has created a master plan to examine and re-zone coffee districts around the country, replacing old coffee trees with new types or encouraging the transition to other crops in areas where coffee is not suited.

Coffee plantation, As a result, Robusta continues to thrive in four Central Highlands provinces: Dak Lak, Lam Dong, Dak Nong, and Gia Lai, covering a total area of 530,000 hectares, with the remaining 70,000 hectares spread over other provinces. In Son La (Northwest), Nghe An, Quang Tri (Central region), Lam Dong (Central Highlands), and other areas in the central region, Arabica trees have been oriented to expand.

Helena selected each coffee kind and type from DAK LAK and Lam Dong, two of the Central Highlands’ most important coffee-growing provinces. Helena chooses the source of its input coffee with care.

The most accurate coffee beans can attain up to 95% accuracy, exhibiting the roundest coffee beans at the proper time and the maximum degree and growing area.

We work with eggplant growers, advising and encouraging them to employ environmentally friendly and safe practices that benefit both the farm and the environment.

In Vietnam, Helena Coffee is produced and exported. Helena., JSC, a Vietnamese coffee exporter, was launched in 2016.

We’ve evolved into one of Vietnam’s most well-known coffee production and export businesses throughout the years. With two primary kinds, Arabica and Robusta, we offer high-quality products ranging from green beans to instant coffee.

They’re sourced from the most significant coffee-growing regions in Vietnam. In 2018, two years after our founding, we achieved Fairtrade certification. Furthermore, the genuine justice of Fair Trade certification can be shown in the way we interact with farmers and give a continuous supply of demand at a higher price than other producers. Helena’s products are backed by quality and trade certifications such as FairTrade,and  USDA Organic.