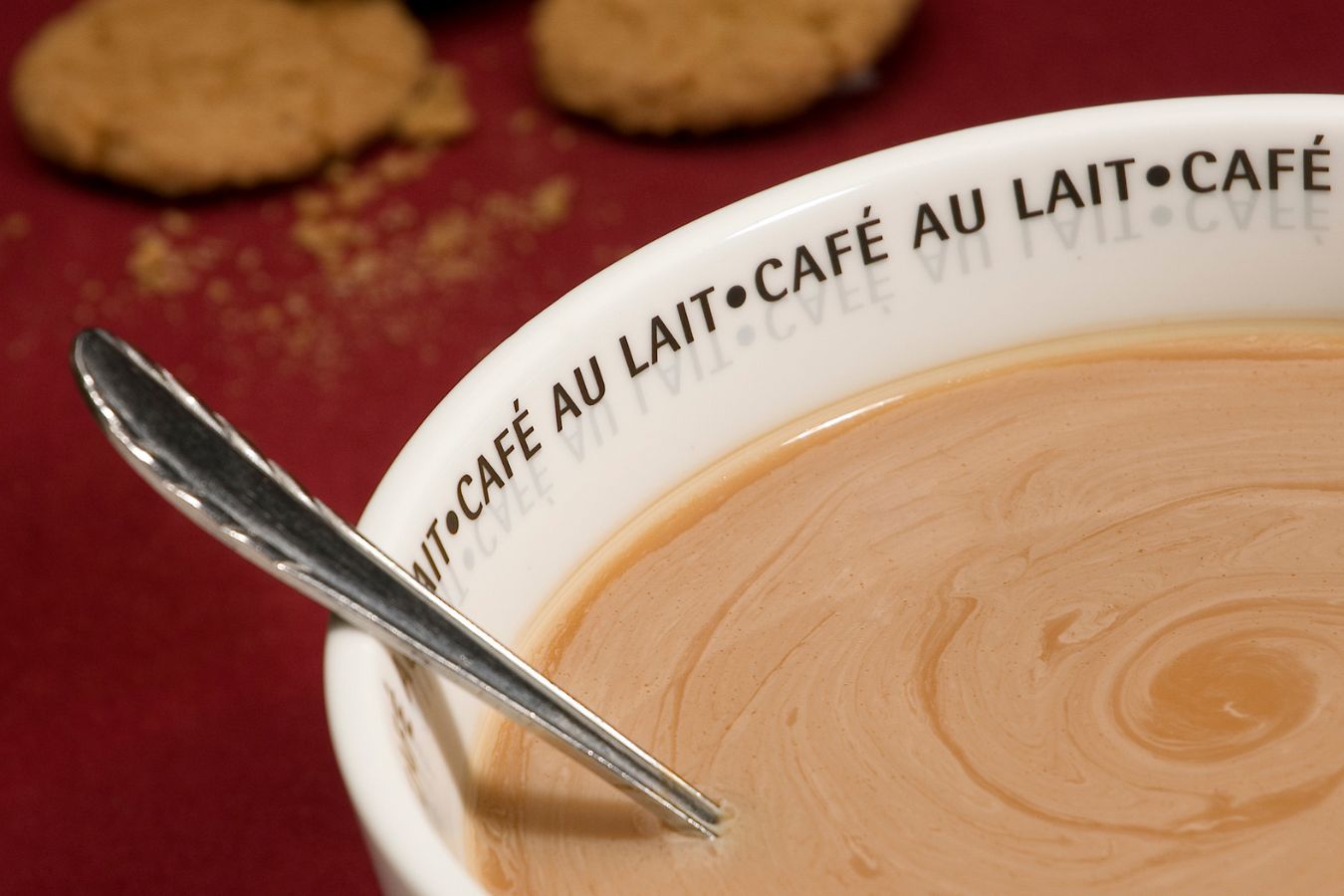 Café au Lait: The Café au Lait has existed for centuries, although it has only lately gained popularity in UK coffeehouses. Suppose you’ve noticed this exotic-sounding coffee in your favorite coffee shop. In that case, you’re probably thinking, “What is a café au lait, and how is it different from other varieties of coffee?”

What exactly is a Café au Lait?

The Café au Lait is often made with brewed coffee and steamed milk, with no foam or froth on top (sometimes certain coffee shops will add it, though). The coffee foundation is often prepared using a French press or a drip coffee maker, and the milk must always be heated.

Café au lait is served in a large cup called a bol. This type of coffee is often used for breakfast and is not usually found in coffee shops. According to a custom, croissants and other cakes used to dip into café au lait are not worthy of the cafe’s tradition.

In French restaurants, café often refers to Italian espresso rather than French filter coffee; café crème will have a little warm milk or milk cream.

The Café au Lait differs from white coffee, which consists of brewed coffee with cold milk or powdered whitener added.

In its native France, the Café au Lait translates to “coffee with milk.” The beverage has a lengthy history, and allusions to Café au Lait may be discovered in the early to mid-17th century writings of Marie de Rabutin-Chantal, the Marquise de Sévigné.

Today, coffee is still widely consumed in France and is customarily served in a large mug or bowl for dunking pastries at breakfast.

Variations of the Café au Lait

In Poland, it is known as “Kawa Biala,” in Germany as “Milchkaffee,” in Hungary as “Tejeskávé,” in the Netherlands as “Koffie Verkeerd,” and in Brazil as “Café com Leite.”

One of the most intriguing variations of Café au Lait is found in New Orleans, where the coffee is blended with chicory for a flavor that is highly robust, powerful, bitter, and a thicker consistency. This variety dates back to the American Civil War when coffee was so scarce that chicory was added to extend its shelf life.

In Europe, café au lait is rooted in continental traditions like caffè latte in Italy, café con leche in Spain, kawa biała (“white coffee”) in Poland , Milchkaffee (“coffee with milk”). in Germany , tejeskávé in Hungary , koffie verkeerd in the Netherlands and Flanders , and café com leite (“coffee with milk”) in Portugal and Brazil . in a glass, such as meia de leite or galão . In Italy, many variations go from simple caffè latte to latte macchiato the cappuccino.

In the Italian and Portuguese languages, there are a lot of more complicated terms to clarify the strength of the coffee, how it is roasted, the desired warmth, etc. In the French-speaking areas of Switzerland Si, a popular variation is café renversé, or often just renversé, made by taking a cup of milk and adding espresso, the opposite of the usual coffee-making method. In Andalusia, Southern Spain, a similar variation is called Machado (“dyed”). In Northern Europe, café au lait is commonly used in coffee shops.

At home, café au lait can be made from strong coffee and hot milk; In coffee shops, it’s been brewed with espresso machines and steamed milk since those became available in the 1940s — so it merely refers to the “coffee and milk” combination. depending on the location, not a specific drink.

Café au lait and caffè latte are used as contrasting terms to indicate a drink served in a “French” or “Italian” manner, the former being done in a white porcelain cup or bowl, the latter being served in the kitchen glass and always made from an espresso machine. In contrast, café au lait can be espresso or strong coffee.

In many cafes in the US, café au lait is a drink consisting of filter coffee or French press coffee, with steamed milk added to it; this is in contrast to caffè latte, which uses espresso as a base. American café au lait is usually served in a cup, as is brewed coffee, served only in bowls in shops that want to emphasize French traditions.

Café au lait is a popular drink in New Orleans, available at cafes like Café du Monde and Morning Call Coffee Stand, where it’s made with milk and coffee mixed with chicory, giving it a bitter taste dark. Unlike the European cafe style, the New Orleans-style cafe au lait is made with skimmed milk (milk heated to just boiling point), not steamed milk.

The use of roasted chicory root as a brewing agent became widespread in Louisiana during the American Civil War, when Confederate naval blockades cut off the port of New Orleans, forcing residents to expand coffee supplies. In New Orleans, café au lait is traditionally served with beignets topped with powdered sugar, eliminating the bitterness of chicory.

The French developed flavors for coffee and chicory during their civil war. Coffee was scarce during that time, and they found that chicory added flavor to the coffee. The Acadians from Nova Scotia brought this and many other French customs (legacy) to Louisiana.

What is the distinction between Café au Lait and Latte?

As another milky coffee, the Café au Lait is sometimes mistaken for the Latte. The Latte has two distinct and thicker layers of steamed and foamed milk, making it milkier. Café au Lait is often prepared with plain brewed coffee (French Press or drip), whereas lattes are usually designed with espresso.