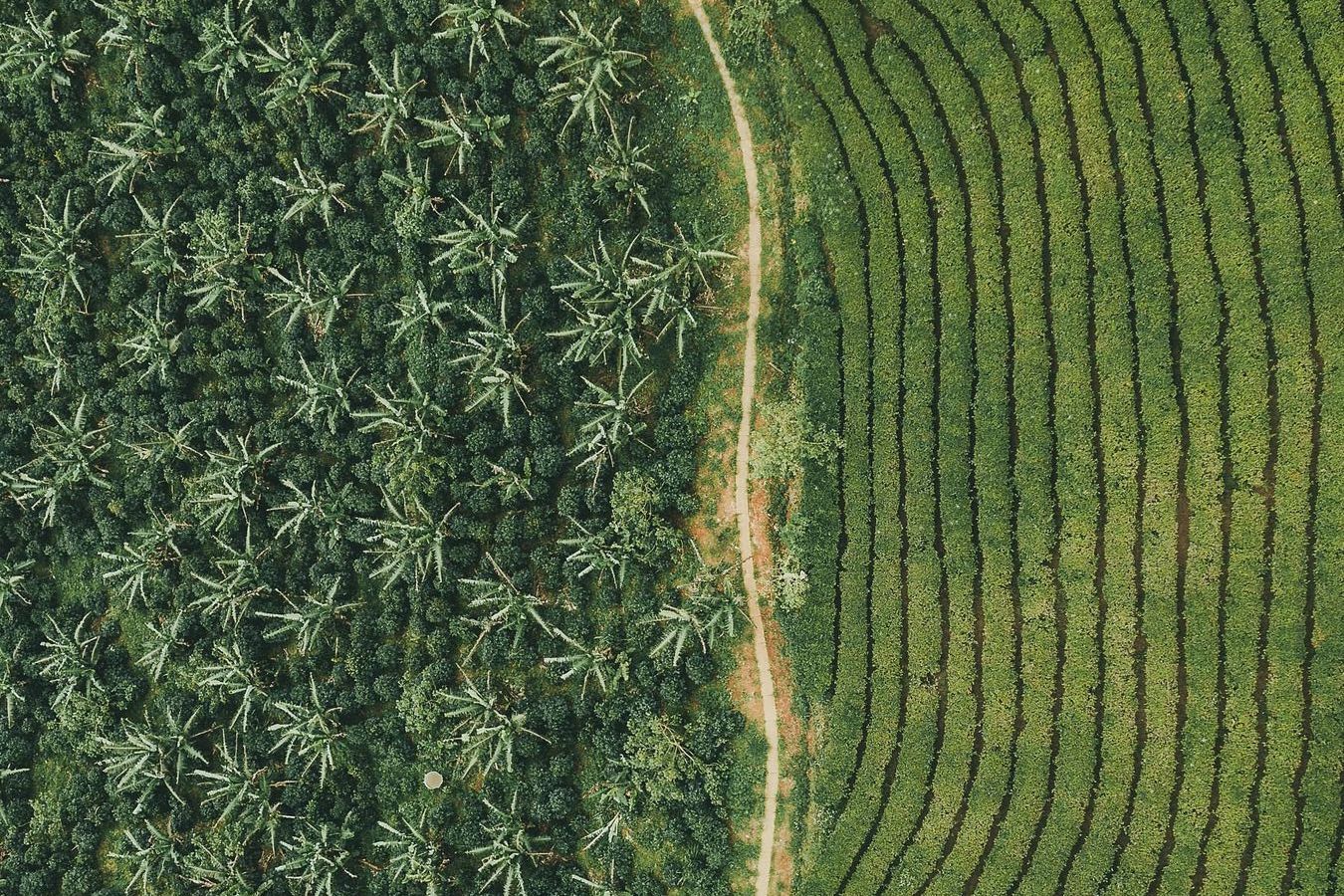 Cau Dat Coffee Origin: Vietnam is a famous country for growing and exporting Robusta, the second largest producer in the world after Brazil (Vietnam – 1.78 million tons compared to Brazil’s 3.36 million tons in 2016 data). Meanwhile, Arabica, which is considered the best quality coffee in the world (compared to Robusta), the Vietnamese name is barely known.

However, few people know that in Vietnam there is still a place located in the highlands, which is known as the paradise of Arabica: Cau Dat – Da Lat (Lam Dong).

When it comes to coffee-growing regions in our country, many people think of the Central Highlands, also known as the Central Highlands, where the rich basalt-red soil area has been blessed. Cau Dat is a well-known coffee shop in Vietnam that serves the best Arabica coffee. The scenery, the climate, and the world-famous coffee are all enough to make for an exciting journey of discovery.

100 Years Of History Of Cau Dat

Located in the southeast of Da Lat city, about 25km away along the way to Trai Mat station, Linh Phuoc pagoda but farther. Cau Dat tea hill covers an area of ​​230ha, with an altitude of 1650m above sea level.

Cau Dat tea and coffee hill is not only a fresh and peaceful destination of Da Lat city, but it is also the “culture” of Da Lat, where many generations of Da Lat people live.

It is the oldest tea factory in Southeast Asia still in operation. The machines are imported directly from Europe – as a historical witness to time, it contains deep historical values.

In June 1893, with the mandate of the Governor General of Indochina, Yersin organized an expedition by road from Bien Hoa to Dong Nai to Di Linh, finally discovering the Lam Vien Plateau.

In 1899, in the land discovered by Yersin, a resort for Europeans was established, which later became Da Lat.

In 1915, he discovered the top of Hon Ba, built an experimental station on the top of the mountain, and planted varieties of plants.

1927 – Establishment and expansion of production

From that experimental nursery, the French found suitable soil for tea plants at the height corresponding to Hon Ba peak (1650 meters above sea level).

And here Cau Dat Farm was officially established in 1927. Tea and coffee growing and exploiting areas are over 600 hectares. During this time, the factory mainly produces black tea, products are brought to France for consumption and exported to other countries in Europe.

1960 – Changed owner to a Chinese trader

1975 – Under the management of Lam Dong province

It was not until 1975 when the country was at peace that the Cau Dat tea department was officially under the management of Lam Dong province.

Equitization transformed into Cau Dat Tea Joint Stock Company – Da Lat. Many tea areas were replanted. Of which, 30 hectares were converted to Oolong tea like in Taiwan.

By 2015, Cau Dat Tea Department was renamed Cau Dat Farm. With cherish bring a new wind to this place.

Cau Dat Farm has many transformations from product form to tourism activities. However, despite the criteria of renewal and innovation, historical values ​​are always preserved and preserved as a hundred-year treasure of this land.

The French imported Arabica to Vietnam in the 1930s, and Cau Dat – Da Lat will soon be renowned worldwide. With the “golden index,” high 1,500 m, and extraordinary temperate climate all year, the maximum temperature does not exceed 330C.

The minimum temperature is 50C; Lam Dong province is considered the Arabica coffee paradise of Vietnam, with localities such as Di Linh, Bao Loc, Don Duong, and the suburbs of Da Lat, especially the Cau Dat area.

This is the country’s highest-quality Arabica coffee-producing region. The more excellent Arabica coffee beans are grown, the higher the terrain and the colder the climate.

Bourbon, Typica, Mocha (Moka), and Catimor are Arabica coffee lines. Three lines of coffee, Bourbon, Typica, and Mocha, are the world’s oldest coffee kinds, although they are challenging to grow and prone to pests and infections.

Catimor, on the other hand, is a hybrid of two coffee kinds, Caturra and Timor, produced in Portugal in 1959. (Timor is a cross between the robusta coffee canephora and Arabica). This type is simpler to grow, has a high yield, and is pest and disease-resistant.

Cau Dat is located 25 kilometers southeast of Da Lat, in the famous Vietnamese Highland region of Lam Dong. Cau Dat coffee is of exceptionally high quality and flavor due to its height and ideal environmental conditions for coffee production.

The yearly temperature range here is from the coldest 5 degrees to the highest 33 degrees Celsius, thanks to its suitable altitude of 1450 to 1650 meters above sea level.

Cau Dat – Da Lat has three golden qualities to be the ideal site for growing Arabica, including the fertile Basalt soil. Famous Arabica varietals with excellent yields include Typica, Bourbon, and Catimor.

Cau Dat has a coffee-producing area of roughly 1,500 hectares, accounting for about 86 percent of the agricultural land here. For instance, where coffee is grown on 98 percent of the land.

The Arabica coffee cultivars grown here are incredibly well adapted to the climate and are rarely affected by pests or diseases. 10-18 tons of fresh coffee are produced per hectare, equivalent to 4 tons of green coffee. Coffee production is far higher than that of other crops.

Because of the aromas of syrup, fruit, honey, toast, and a summer afternoon in a straw field, Arabica has a highly exquisite and noble scent. Cau Dat coffee is described as having the clean flavor of a Sunday morning, and users will never forget it once tasted.

Arabica, located in the heart of Cau Dat, has won the hearts of the world’s coffee enthusiasts. Arabica coffee is the primary raw material used by the world’s most well-known coffee brands.

That was the answer when Starbucks Coffee, a famous coffee brand worldwide, chose Arabica Cau Dat – Da Lat as one of seven coffee varieties to include in its worldwide supply chain in 2016.

We are proud to have access to the most significant ingredients in Vietnam. Cau Dat Farm strives to give the most excellent coffee goods to the market, meeting the demands for clean Vietnamese coffee with the correct flavor for coffee fans all around the country.

Since then, we’ve been bringing delicious, high-quality, and exceptionally stable coffee goods to market straight from the source.

Cau Dat Farm is created and integrated with a thorough quality control method to ensure regular coffee. Take that as the quality standard for their products since consistency in delightful taste is the essential requirement of customers who enjoy coffee.

At the same time, consulting is a dedication to providing customers with a high-quality cup of coffee, with customers’ health taking precedence.

Since then, Cau Dat Coffee has been on a mission to develop specialty coffee. When it comes to competing in this prospective coffee market, it’s a large playground, requiring businesses and coffee growers to modify their ways of thinking about coffee production, processing, and quality improvement.

We must affirm that Vietnam has a lot of coffee, good coffee, and specialized coffee to strengthen the invitation and marketing of coffee and coffee goods.

Changing the tradition of coffee drinking to pure roasted coffee to increase domestic consumption is the most pressing issue facing Vietnamese citizens today.