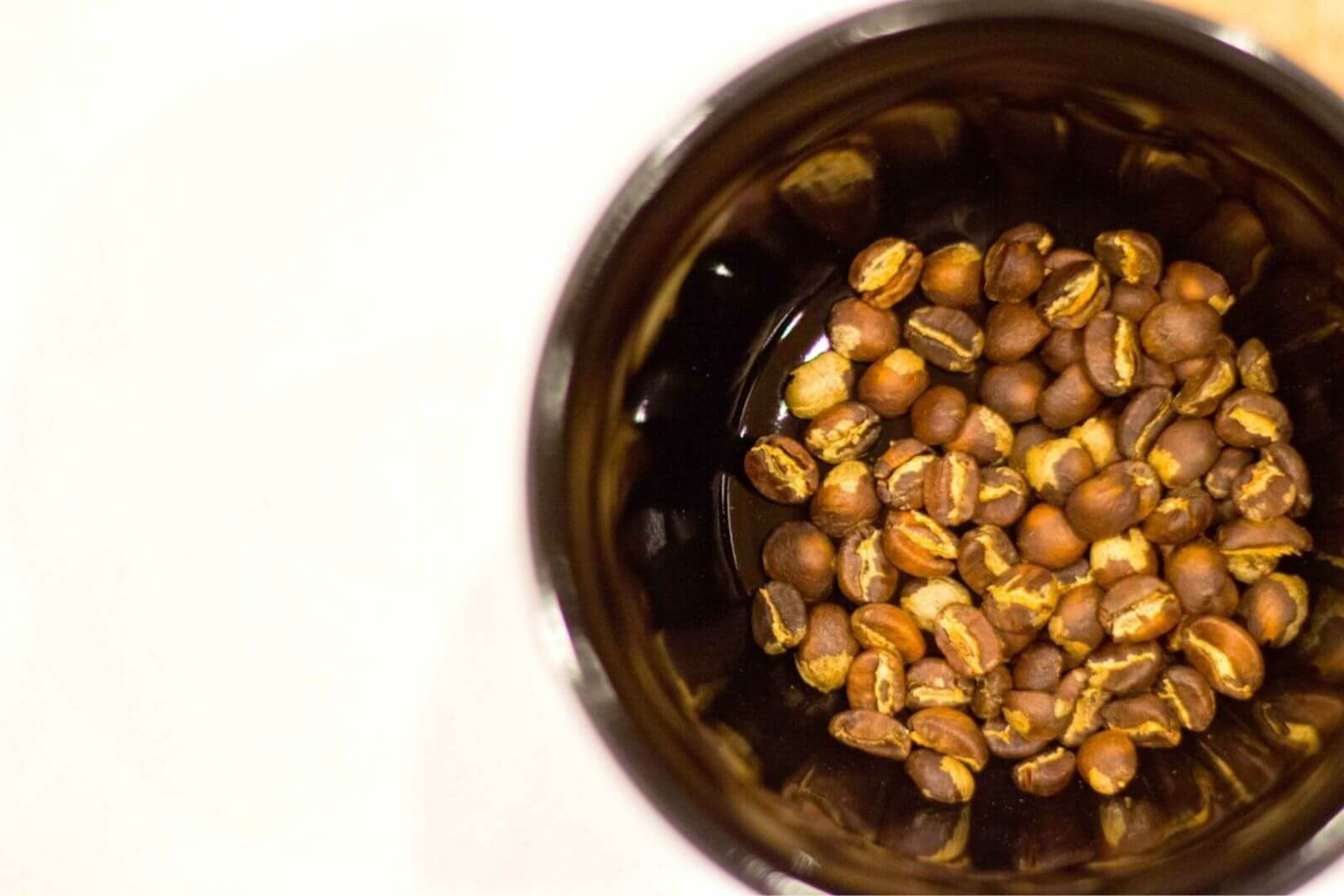 Coffee Beans Density Changing In During Roasting And Coffee Bean Flavor: The thickness of coffee beans is a vital data parameter for coffee roasters. Both buyers and sellers of green coffee. It’s commonly misunderstood as a simple quality rating, but it’s much more than that. To comprehend coffee bean density, you must first determine what makes coffee denser or less dense. The roasting process and the coffee flavor profile are affected by graded and how density impacts them.

You can usually determine if the coffee is dense or not merely by looking at it. The bean may be less dense if the fissure (fissure in the core of the bean) is virtually straight and only slightly open. However, if the crack is crooked and closed, the coffee beans may be denser.

Coffee specialists all over the world know the density of coffee beans. The ability to categorize green coffee by quality is a crucial factor. Green coffee producers often sell for more because processing purchasers want harder, denser coffee beans.

Because higher altitudes give a consistent chilly temperature, coffee cherries take longer to grow. This is significant because arabica coffee plants thrive at temperatures between 18 and 21 degrees Celsius. The faster the coffee ripens, the greater the temperature.

The Krebs cycle is responsible for the ripening of coffee beans. Acetate (produced from proteins, carbs, and lipids contained in coffee) is converted to carbon dioxide throughout the conversion process. When coffee is grown at higher altitudes, the Krebs cycle takes longer, which is why the fruit takes longer to ripen.

However, particle density is affected by more than just altitude and temperature. Rainfall variation and distribution, as well as nutrient availability, all play an impact.

Bourbon coffee, for example, is well-known for its wide variety, as are rarer and more special variants like Geisha and Wash Wash.

Kenyan coffee quality control expert Peter Gakuo. He went on to say that the density of coffee beans is affected by the distribution of nutrients in the coffee plant.

A variety of diseases and pests can impair the maturity stage of coffee plants, resulting in a reduction in coffee bean density.

Coffee professionals utilize the “hardness” data to categorize and assess the density of coffee beans. Coffee beans are frequently categorized into several varieties based on the height at which they are grown.

Due to less stable temperatures and higher oxygen levels. As a result, the seeds are less thick and have a more round, less sweet, and sour flavour.

Fruit development is sluggish at these elevations due to greater altitudes and consequently low oxygen atmospheres. As a result, the kernel becomes tougher and denser, with a more pleasing smell form.

It becomes more challenging to determine the genuine “best” height above 1,370 m, as the actual “best” altitude will depend on the area and origin in question. Hard Bean Coffee is a type of coffee cultivated at this elevation (SHB). The moniker is given to the coffees grown at the highest elevations today.

Coffee bean density can also be determined by looking at the physical properties of the beans. The grain structure mainly determines the thickness of the grain. The more open the system, the softer the bean; the tighter the design, the firmer the bean.

The density of coffee beans is another crucial factor for roasters to consider. When the beans are of varied sizes or thicknesses, the roasting procedure will affect them differently. The secret to roasting consistency is to separate them and roast them separately.

It’s a good idea to select and separate beans of different densities and sizes when roasting for testing purposes.

While all of your beans should be roughly uniform, it’s important to remember that harder and softer beans will behave differently while roasting. When customizing your coffee roasting profile, two key elements should be considered: supply temperature and airflow.

You are studying one of the two most important processes in the series of articles about coffee roasting:

The basis of physical transformations when roasting

Coffee beans have the highest cell density and diversity of all plants in the family, which is a prerequisite for all the flavor variations we desire. Without a specific physical structure, the chemical reactions necessary for taste and aroma would not take place.

In The Craft and Science of Coffee, Britta Folmer points out that you can’t roast ‘green coffee powder in the same way as whole bean coffee (sounds obvious right?). This is to emphasize that the whole coffee bean is similar to a “mini reactor” that allows essential chemical reactions to take place. Each particle will control the reaction environment in such a way that the precursors will decompose, transform, combine… in the right order.

Every plant (and animal) cell has a cell membrane, in the case of the coffee bean, which is composed of cellulose and a few other carbohydrates. These cell walls act as a ‘vegetal skeleton’, forming a very strong structure. If we extract about 20% of the solids in each coffee bean into an espresso, most of the remaining 80% is this cellulose framework.

Compared to other roasting processes in food applications (beans, cocoa, etc.) coffee roasting requires the highest temperatures to develop the desired characteristics. In general, the temperature of the beans is usually above 190°C for a certain minimum time to trigger the typical chemical reactions of roasting –  The Craft and Science of Coffee

Second, most plant cells take the form of an empty ‘pocket’ in the middle called a permanent vacuole. The vacuole space for coffee beans is very large and can occupy more than half the volume of the cell. Their main job (when the seeds are still alive) is to retain water or nutrients such as proteins, fats, and carbohydrates… After undergoing roasting these ingredients become the main flavor compounds.

Compared with other roasting processes in food applications (beans, cocoa, etc.) coffee roasting requires the highest temperatures to develop the desired characteristics. In general, the temperature of the beans is usually above 190°C for a certain minimum time to trigger the typical chemical reactions of roasting – The Craft and Science of Coffee.

The most obvious change that occurs during roasting is color. Before roasting, coffee beans are green. Then a few minutes of heat causes the chlorophyll present in the beans to turn yellow, before triggering a further series of chemical reactions that turn the coffee beans brown – to dark brown and finally black. . This process is responsible for two main groups of chemical reactions:

Although the color of coffee beans will continuously change from green to yellow, brown, dark brown to black. But because the transition from yellow to brown takes place at the end of the roasting process in a very short time, and the classification according to the color scale is quite complicated, so we will summarize the five main levels as follows:

The first issue to consider here, is that the development of flavor inside the coffee bean always progresses later than understanding the color outside the hat. Therefore, a skillful artisan must manage this process and ensure that the internal flavor is fully developed as the color reaches its grain. And it should be noted that in the first half of the process (Light roast) the difference between the color expression and the growth inside the grain is not significant, the latter (Dark roast) this difference is larger.

Second, it should also be noted that a darker roast does not make the coffee grow more. On the other hand, a light roast does not mean that the coffee is fully developed. Color is only part of the expression of taste. So, with the right development, any color of roasting can give a rich and rich flavor.

Anyone who roasts coffee understands that the final cup quality of a given lot of coffee is heavily influenced by the farm itself — Mother Nature and farmers working together. But, of course, it is the artisan who prepares the coffee who can either stymie or masterfully unlock the hidden treasure within. It follows that the more we know about a specific bean, the better prepared we are to devise a brilliant roasting strategy.

Bean density is one of those features that often go unnoticed, despite the fact that we are usually only mildly interested in it.

Higher altitude coffees are typically preferred by roasters. This is largely due to the fact that those beans are denser. The cooler weather at higher elevations, especially at night, slows the ripening of coffee cherries. This increased time on the plant results in more cell multiplication within the bean, resulting in a higher density.

Of course, altitude alone does not determine bean density. This is especially noticeable when comparing one origin country to another, so it’s important to quantify it. Because lab density meters are so expensive, it may be tempting to ignore this.

Loss of moisture in coffee bean density during roasting

Throughout the roasting process, coffees will lose 12%-24% of their own internal weight – depending on the initial moisture content (and the degree of roasting at the end). Since the first crack appeared, it marks the coffee has lost 11%-13% by volume. About 30 seconds after the first crack ends, it’s about 14% -16%. And at the beginning of the second crack, the coffee has lost 17%-18% of its volume (*).

In the specialty coffee industry, with a priority given to preserving the beans’ native flavors, most roasters keep their beans “lost” at an average of 14%-16% by weight. their initial amount.

With the above weight loss – water accounts for 90% of the lost weight. The remainder is organic matter that is released in the form of CO2, as well as small amounts of carbon monoxide, nitrogen, aromatic compounds, and volatile acids.

Organic loss increases more significantly from medium roasts, with loss of organic matter from 5 to 8%, and up to 12% from dark roasts onwards.

citation * These estimates were calculated by Scott Rao from an initial green coffee moisture content of 10%-12% and a roasting time of 11 to 12 minutes, in reality, subject to considerable variation.

When the steam pressure in the coffee beans is constantly increasing between 100 – 160°C, the steam pressure will break the grain structure to create a “bang” that we call the First crack. At this point, the beans can double in volume, and depending on the degree of roasting, the moisture content in the beans will drop from the original 10-12% to about 3-5%.

After the first crack, the structure of the coffee beans becomes more brittle, leading to the second crack (about 225 – 230°C). But the ‘second bang’ does not result from the release of free water present in the grain as it does for the first crack.

That is because the remaining water in the grain has participated in the decomposition reaction of sugars, proteins, etc. Therefore, the second crack is mainly created by the release of pressure caused by CO, CO2, NOx, and other substances, other gases.