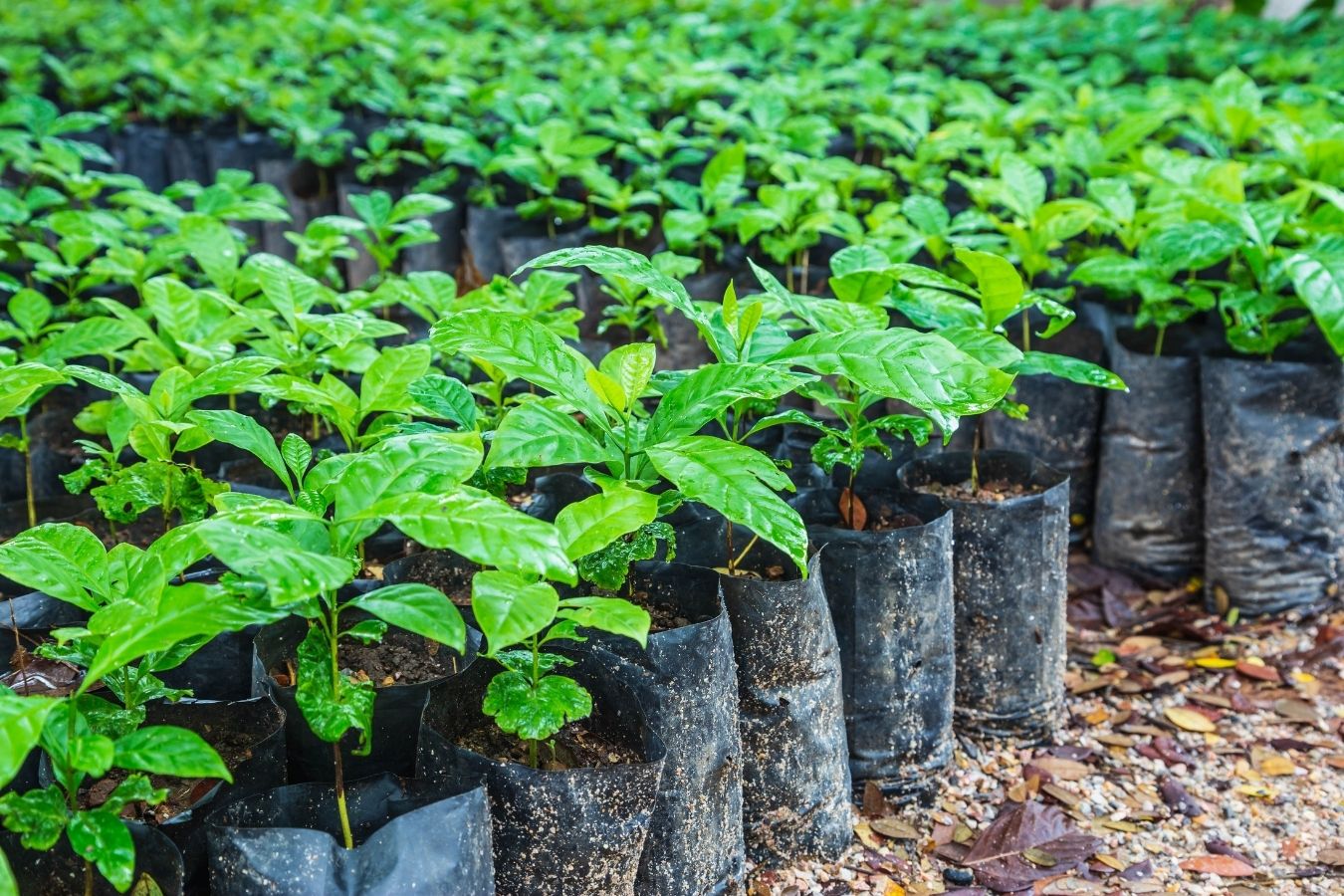 Botanical Characteristics Of Coffee plants: From the time when the eighteenth-century Swedish botanist Carolus Linnaeus first described the coffee genus to this day, botanists still disagree on the classification due to the many variations. Occurs in plants and coffee beans. Linnaeus classified coffee shrubs in the family Rubiaceae, which includes 4,500 species, of which more than 60 are referred to as “coffea.” Coffea species range from small shrubs to trees up to 32 feet tall, and leaves can range in color from purple to yellow; however, green is the dominant color.

The coffee genus belongs to the family Rubiaceae, including Gardenia, Ixora, Cinchona, Rubia, and Coffea. The most economically important genus in the family, Rubiaceae, is still coffee ( Coffea ). The genus Coffea includes approximately 100 species. The two main species of coffee trees widely grown worldwide are tea coffee ( Coffea arabica ) and coffee with robusta ( Coffea canephora or robusta ). The secondary species cultivated is jackfruit coffee (Coffea excelsa). This species is restricted to West Africa and Asia, accounting for about 1-2% of global coffee production. Although morphologically distinct, Coffea species share some genetic features, the relationships between species in this genus are controversial (Carvalho and Monaco, 1967; Medina, 1972).

The basal chromosome number of the genus Coffea is 11 and is specific to all other genera of the family Rubiaceae (Sybenga, 1960). Most species of the genus Coffea are diploid (2n = 2x = 22) and are completely incapable of self-pollinating. Only coffee ( Coffea arabica ) species is tetraploid (2n = 4x = 44) and is also the only species capable of self-assembly and self-pollinating.

In general, the taxonomy of plants as well as the evolution of groups and species of the genus Coffea is a highly complex job because it includes many species of plants with very different botanical characteristics, from shrubs less than 1 m high from climbing plants to woody trees over 15 m tall with branches, leaves, and fruits of many different sizes, shapes and structures. However, this is a significant work of pure scientific significance and paramount practical importance in helping breeders as a basis for crossbreeding improvement and selection of varieties.

Most Arabica coffee plants are grown worldwide no more than three or four generations from the wild. This means that many of the physiological characteristics of coffee are similar to those of Ethiopian coffee varieties from wild forests. And that means they still prefer to adapt to the environment found in the cool spaces of wild forests ( MGR Cannel, 1985 ).

Selected sun-adapted cultivars under intensive management conditions have allowed Arabica coffee plantations to spread to marginal regions with average temperatures as high as 24-25ºC, such as in northeastern Brazil ( DaMatta and Ramalho, 2006 ). On the other hand, in areas with a mean annual temperature below 17-18ºC, growth potential is primarily impaired ( DaMatta et al., 2007 ). The dark zone for Arabica coffee is relatively limited to the wild forest-like areas of Ethiopia. Similarly, the anatomical structure of coffee around the world remains the same as that of their ancestors in the dew forests—blindness in the Boma Plateau of South Sudan and the highlands of Ethiopia.

Coffee trees, in general, possessing a pile of roots, are deeply rooted in the ground, about 0.3-1m from the ground. It is distributed about 1.5 m in diameter around the trunk (Alfonsi et al., 2005; Da Matta et al., 2007). In farming practice, most Arabica plants are single-stemmed plants. Generally, the full development of a coffee plant’s root system consists of 3 types of roots:

In addition to the intrinsic factor is the variety. A variety of external factors such as physical properties of the soil, humus content, soil moisture, pH, mineral nutrient content, temperature, farming techniques, etc. … significantly affect the formation and development of roots.

System of stems and branches

Coffee is a perennial, small woody plant, 4 – 10 m tall, depending on the species and living conditions. The tree has dimorphism in two dimensions, the vertical and the horizontal. The shoots that grow only vertically are Orthotropic shoots consisting of the main stem and the projections that extend from the main stem. The rest are all the shoots that grow only horizontally, called Plagiotropic branches, composed of horizontal branches growing from the main stem and other secondary branches capable of bearing fruit. And is divided into two categories:

Upright branches (overshoots or overshoots) are branches arising from dormant buds in the leaf axils on the main stem. Overgrown shoots have the characteristics of upright growth, fast growth, and consuming a lot of nutrients but not being able to bear fruit. While shaping and creating a canopy for coffee trees, excess shoots need to be removed regularly and promptly to avoid nutrient loss, except for cases such as using overshoots to form new stems, supplementing the canopy when a deciduous tree.

Coffee leaves are elliptical in shape, dark green, growing symmetrically on the branches. The leaves are usually in pairs along straight branches. Trees tend to shed their leaves at the end of the dry season to coincide with the harvest period. The leaves of the coffee plant do not respond well to wind pressure. High winds can reduce leaf area and shorten the internode length of branches. Mature leaves are usually about 8-15 cm long by 4-6 cm wide (Caramori et al., 1986 DaMattaI, 2007).

For coffee trees to develop a pair of branches, it takes a period of 25-30 days. Seedlings after being planted for a year have the ability to develop from 12-14 pairs of branches.

Coffee flowers are white, including five male and female stamens. The ovary contains two ovules. If fertilized at the right time, it will produce two coffee beans. Coffee flowers bloom early in the morning and bloom throughout the day. In the afternoon of the same day, the anther turns brown once fertilization occurs. Two days later, parts of the flower withered and fell off, leaving only the developing ovary. Coffee chalk is light in weight and easily carried by the wind. Wind pollination is essential for coffee; however, because coffee flowers have an attractive aroma to insects, insects contribute more to the pollination process of coffee flowers.

Usually, coffee plants start to flower from the second to the third year. Flower buds develop in the leaf axils of horizontal branches and rarely develop on upper shoots. Blooming in coffee is divided into two stages: the stage of flower differentiation and the growth of flower buds, which develop until the flower blooms. In each such phase, many internal and external factors affect it. At the end of the harvest, there is a process of differentiation to form flower buds. Flower buds continue to develop ultimately (sparrow form) if thoroughly watered; then, from 5-7 days, the flower will bloom; this time can be longer if the flower has not developed fully before.

The coffee berry is often referred to as a berry (cherry or berry) but is a drupe. Other nuts include apricots, peaches, and plums. And all of them (berries & nuts) are commonly referred to as fleshy berries.

If you squeeze a ripe coffee bean between your fingers, the outer layer ( exocarp ) and the outer layer of the dermis ( mesocarp ) slide off the inner layer quite easily. The inner layer ( endocarp ) is a hard shell containing the coffee bean (also known as the husk), usually the mucilage, which remains firmly attached to the husk. Mucus is composed of tissues rich in sugars and pectin but interestingly free of caffeine and tannins (Wintgens, 2004). In your hands (if you’re still keeping the peel) is the outer layer of the mesoderm, commonly known as the ” pulp, “which remains attached to the rind and is often removed during processing or sometimes reprocessed—used to make cascara.

Coffee beans are not dormant. Therefore, seeds should be sown as soon as possible after the fruit is ripe. At this stage, the germination rate is above 90%. Germination rate decreased rapidly after two months for coffee with vanilla and six months for coffee with tea when stored at room temperature. If the seeds must be stored, they should be lightly dried at low temperature (below 40 o C) to reduce the moisture content to 12-13%. Dried seeds stored at 10oC will maintain high germination for several months. The facts have proven that coffee beans with a 10 – 11% moisture content stored at 15oC can be maintained for nearly two years ( BMT Coffee Association, 2021 ).

A coffee berry usually has two kernels, but in some cases, only a single bean – these are larger, and rounder than regular beans and are called Peaberry (or Culi coffee in Vietnam). Peaberry is sometimes considered a defect, even though it does not manifest a particular taste. Peaberries are more expensive than regular beans, and many roasters report that they are easier to roast than regular beans because of their oval-shaped round shape. It simply causes yield loss in the harvest.
Peaberry formation research indicates that they are the result of environmental stress. In some cases, Peaberries can account for up to 40% of the crop. Plants with peaberries are usually removed from the farm because for every 1% of peaberries in a crop, there is a loss of 0.75% in yield ( A. Carvalho and LC Monaco, 1969, p.219).

A study on drip irrigation of coffee plants showed that in the first year of cultivation, plants that were not irrigated had a very high percentage of Peaberry, at 21% of the total crop ( Barbosa et al., 2015). ). The report adds, “Peaberry fruit/seed formation is partly related to adverse environmental factors, mainly during flowering and fruiting. Therefore, proper irrigation management during these periods created better conditions for the formation of coffee beans, thereby reducing the incidence of Peaberry.” Research has demonstrated that air temperature near 24ºC (1 degree above the upper limit of what is considered optimal for Arabica coffee) increases the amount of Peaberry fruit (Pezzopane et al., 2007; Barbosa et al. events, 2015 ).

The first stage: takes place in the first six weeks after blooming. Although growth is not significant during this stage, the fruits are not considered dormant, as they have a high respiration rate. The development of the coat and seeds is mainly by cell division rather than by cell expansion.

Second phase: rapid weight gain – lasts about the next l0 weeks. From week 6 to week 17 of development, Fruits increase rapidly in size and fresh weight. This stage determines the maximum size of the coffee bean. Cell expansion predominates towards the end of this period.

The third stage: maintenance and growth retardation, lasts about two weeks, the fruit reaches its final size during this (short) transition period, but the dry matter of the fruit remains low.

Endosperm filling phase: The dry matter is filled with cells from about 17 to 28 weeks. There is little change in the fresh weight during this period as the dry matter is mainly deposited in the kernel (seed). The ripening of coffee beans becomes complete when the maximum dry matter content and maximum germination capacity are simultaneously reached.

Maturity stage: in the final stage of development, most changes occur in the outer bark, increasing in size and volume (fresh and dry), pigment accumulates to form red or yellow color. The ripening process can last for about l0 weeks, from the 24th to the 34th week from blooming.

It should be added that while the fruit can still accumulate dry mass if it remains attached to the parent plant for long periods, the seed may lose its dry mass after maturity. The loss of dry mass of the seeds can be caused by disruption of the transfer of substances from the fruit to the seed, spoilage of the seed, and the consumption of the substrate by respiration. In fact, pulp respiration increases during ripening, as does the sugar content (Eira et al., 2006).