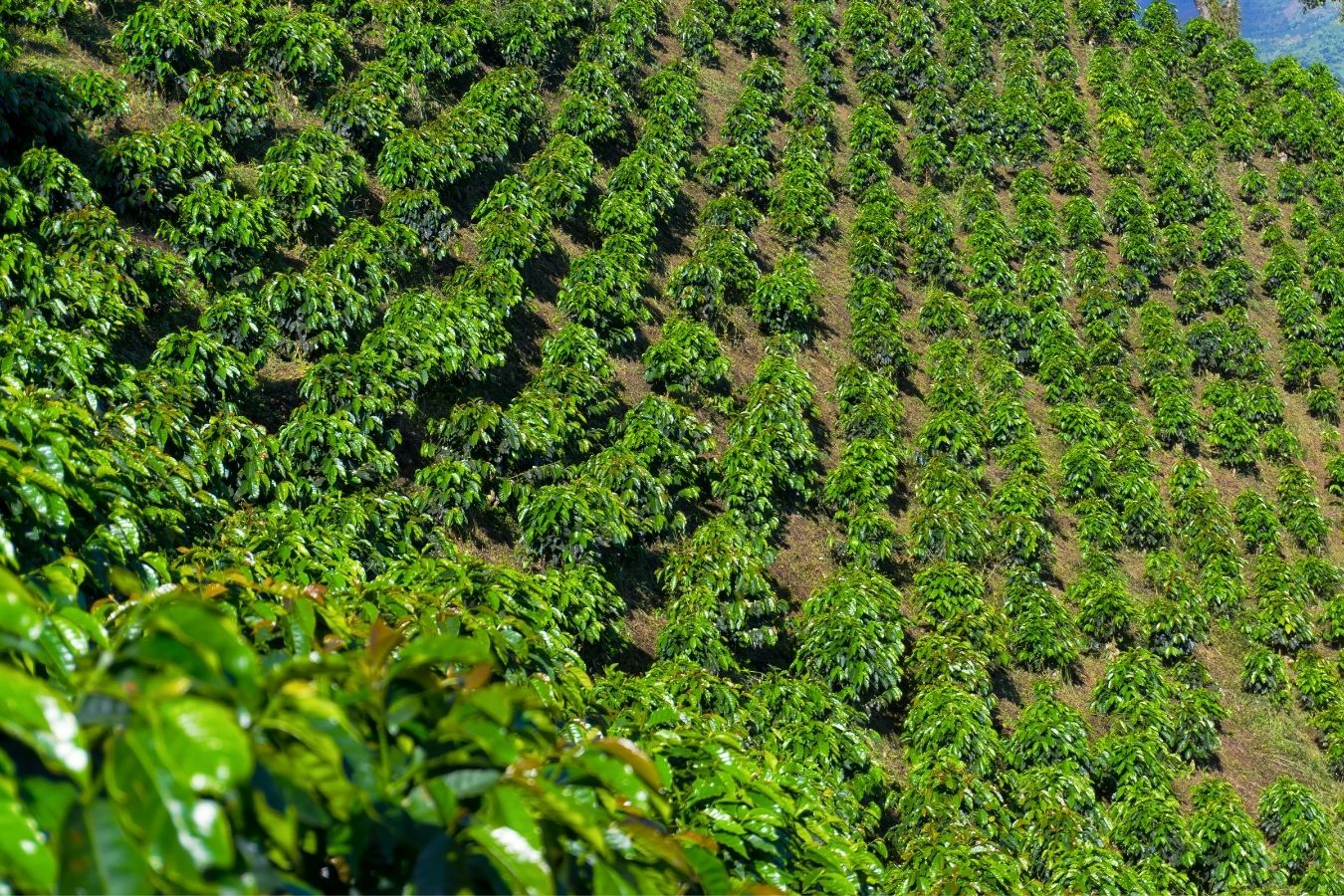 Ecological Requirements Of Coffee Plants: For the most part, coffee trees are grown around the earth’s equator, between the Tropic of Cancer and Tropic of Cancer. This fact appears to be due to environmental conditions rather than geographical restrictions. The essential requirements for coffee to grow are a temperate or tropical climate with no frost, plenty of sun, and plenty of water, on a moist, fertile, well-drained soil under a shady canopy that receives full sun each day. And, of course, these conditions mostly converge at a certain altitude, the higher up – as long as there is no frost, the better the coffee tends to grow.

With these rather delicate growing requirements, the equatorial region is home to most of the world’s coffee farms. However, some growers are now attempting to challenge this standard with active farming regions. Outside the famous ” bean belt. ”

In this article, we will analyze the influence of Terroir factors such as altitude, latitude, and light on the growth temperature of coffee plants.

The optimal precipitation in a  terroir depends on many factors, typically soil properties (soil containing more organic matter can hold more water). It also depends on atmospheric humidity and cloud cover, and farming practices. Arabica coffee’s optimal annual rainfall range is 1200–1800 mm ( Alègre, 1959 &  DaMatta et al., 2007 ). Heavy, year-round rainfall is often the cause of months-long harvests and low yields ( Damatta et al., 2007 ). When there is a distinct dry season, it is easier to predict the flowering and fruiting of coffee trees. This is typical of regions in the subtropical belt, such as Brazil and Vietnam.

The highest rainfall spread across the tropics usually corresponds to the time when the sun is in direct sunlight in that region. For example, the Tropic of Cancer receives its heaviest rains around the summer solstice in the Northern Hemisphere (June 21). Annual rainfall in most growing regions ranges from 1500–2000 mm.

The period of plant growth tends to synchronize with the distribution of rainfall. In a study in Viçosa, southeastern Brazil (20º46′ South, 650m altitude), Da Matta et al., 2007 measured shoot growth over several months to conclude: “The most vigorous growth closely follows the coming and going of the rainy season with the warm climate.” The researchers observed that “Arabica coffee plant shoot growth slowed down in the cool, dry season, and faster in the warm, rainy season.”

What about flowering? The fastest flowering and slowest shoot growth rates are during the dry and cool winter months, and “spring” rains trigger rapid flowering and shoot development ( MGR Cannell, 1985 ). In regions where the dry and wet seasons are separated (Central Highlands, Vietnam, or Sao Paulo, Brazil), primary flowering occurs only once or twice, immediately after the end of the dry season.

Robusta trees prefer hot and humid climates and are often grown in lowland areas, with an altitude of about 500 m above sea level, so they need a relatively high amount of rain a year. The suitable annual rainfall for Robusta coffee is from 2,000 to 2,500 mm and is distributed relatively evenly over nine months. Because it is a cross-pollinator, Robusta needs to have a dry period of at least 2-3 months after the harvest period to differentiate flower buds. Then during the flowering stage, the plant needs dry weather without rain or fog for the pollination process to occur smoothly. In the stage of flower differentiation, plants need a relatively large amount of water, from 400 to 500 liters, for full flowering and good pollination ( BMT Coffee Association, 2021 ).

Compared with coffee, tea (Arabica) or jackfruit (Liberca), coffee with Voi has the worst drought tolerance. In the conditions of some provinces in the South and Central Highlands of Vietnam, due to dry buying lasting from 5 to 6 months, in order for plants to grow well and give high yield, it is necessary to combine fresh and pepper 3 to 5 times. with the average amount of water for each irrigation is 500 – 600 m 3 /ha

Arabica coffee prefers cool, dry climates and is often cultivated in higher areas, so it needs a relatively moderate rainfall of about 1,400 – 2,000 mm/year to be most suitable for growth. Growth and development of Arabica coffee plants. To differentiate flower buds, coffee and tea need to have a dry period of 2-3 months. Compared with coffee trees, coffee and tea trees have better drought tolerance. Coffee and tea plants can withstand a drought of 4-6 months if the soil is deep and has good water holding capacity.

Research results of the Eakmat Coffee Research Institute show that in the climatic conditions of Buon Ma Thuot, the first watering for Catimor coffee cultivars 1 month later than that of black coffee did not affect the yield. yield but also makes the particle size larger

The relationship between the total rainfall and the distribution of rainfall in the year with coffee yield has also been studied by many authors (Dean, 1939; Sylvain, 1959; De Castro, 1960, Nguyen Sy Nghi, 1982). . The results show that, depending on the climatic conditions of each region, in general, the distribution of rainfall between months of the year has a more significant influence on the productivity than the total rainfall in the year. Usually, the years when the dry season months have less rain, the higher the yield of the next harvest will be. Or, in the months of rapid fruit weight gain (from week 6 to week 17) with high rainfall, the yield of that crop is higher, and the grain size is also larger (De Castro, 1960; Cannell, 1987; Hoang Thanh Tieng, 1993).

In addition to air humidity, the process of transpiration through coffee leaves also depends on wind speed, ambient temperature, soil moisture, etc. . If during this period the air humidity is too low, combined with dry conditions, high temperature will lead to the consequences of causing the sprouts, flower buds to shrivel, and the young fruit to fall. The increase in air humidity is also due to cloud cover and fog. Therefore, it can be partially compensated by cloud cover and fog during the dry season in regions with insufficient rainfall. Fog can also increase soil moisture by condensing water vapor on the coffee leaves. The relative humidity of the air also varies considerably between the inside and the edge of the coffee garden.

Arabica coffee plants are less adapted to scattered light and heat tolerant than Robusta. However, the planting of shade trees for coffee and tea must be based on the specific climatic conditions of each region, coffee varieties, and planting density.

In general, in areas with altitudes above 800 m above sea level, the temperature is usually lower, and the sky is cloudy, so it is not necessary to plant shade trees. Or in some mountainous areas in the northern provinces of Vietnam, although there is no altitude above 800 m, located at high latitudes far from the equator, such as Son La, Moc Chau, and Lang Son, it is also possible not to plant shade trees or plant trees. With low density. In contrast, it is necessary to have shade trees in areas with low altitudes, high temperatures, and abundant light. Shade trees in these areas have the effect of regulating the temperature in the garden and slowing down the ripening time, enabling the seeds to accumulate nutrients, especially compounds. Fragrance enhances quality.

Among the varieties of coffee and tea, the dwarf varieties with small canopy and low trees such as Caturra , Catuai , Catimor etc… are varieties that are more resistant to drought, high temperature and light intensity than other varieties. different and can adapt to low altitude areas. The varieties like Typica , Bourbon etc. are varieties with poor sun tolerance, only suitable for areas with high altitudes and low temperatures.

Compared with Arabica, Robusta coffee is suitable for excellent light conditions. However, in areas with strong direct sunlight, coffee trees need shade trees to regulate light and photosynthesis. Typically, in the Central Highlands, Vietnam, it is necessary to plant shade trees in the coffee garden due to the dry season lasting from 5-to 6 months, high temperature, and intense light. Finally, Liberica coffee is the best sun and drought-tolerant plant, preferring direct sunlight, so it is not necessary to grow shade trees. In the next section (shade in coffee farming), we will look at the role of shade trees on coffee yield & quality.

Arabica coffee is found in native environments between 1000 and 2000 meters above sea level ( Schmitt, Christine B., 2006 ). But you can also find coffee plantations up to 2800 meters above sea level. This limited growing range is the species’ relatively low frost tolerance – temperatures below four °C will kill the plant. Arabica’s susceptibility to fungal diseases also limits its ability to grow at low altitudes, where it would otherwise be more likely to thrive.

The growing height directly correlates with the plant’s ideal “temperature range.” In other words, successful Arabica coffee cultivation depends on a delicate balance between altitude and latitude. For optimal cellular respiration to produce good yields and great taste, agronomist  Leonardo Henao says daytime temperatures between 17 and 23°C are vital in optimizing the process. Coffee metabolism and sugar storage in the bean. This balance is usually reached at altitudes between 1000 and 2000 meters above sea level in the warm tropical belt.

Experts also think that for every 300 meters increase in altitude, the sucrose content in coffee beans will increase by 10%.

With a basic knowledge of Geography, you probably know that the earth revolves around the sun (in a year) and rotates around itself with an inclination of 23.44 degrees. A coffee farm located on the Tropic of Cancer will receive direct sunlight for half a year. But half a year later, the sun’s angle will shift from 23o 26′ North to 23o 26′ South. This change resulted in about 36% more direct sunlight being spread over the land area, reducing the light intensity where it hit the earth.

An established rule in winemaking is that the angle and direction of the hillside can alter the flavor of the wine, and the same is true in the coffee industry. An excellent example of this is the difference between the north and south slopes. If your coffee farm is located on the Tropic of Cancer during the rainy season, the sun will align with the Tropic of Cancer. In this situation, the north-facing hillside receives the most direct sunlight, and the south-facing hillside receives as little light exposure as possible ( Bertrand et al., 2012 )…