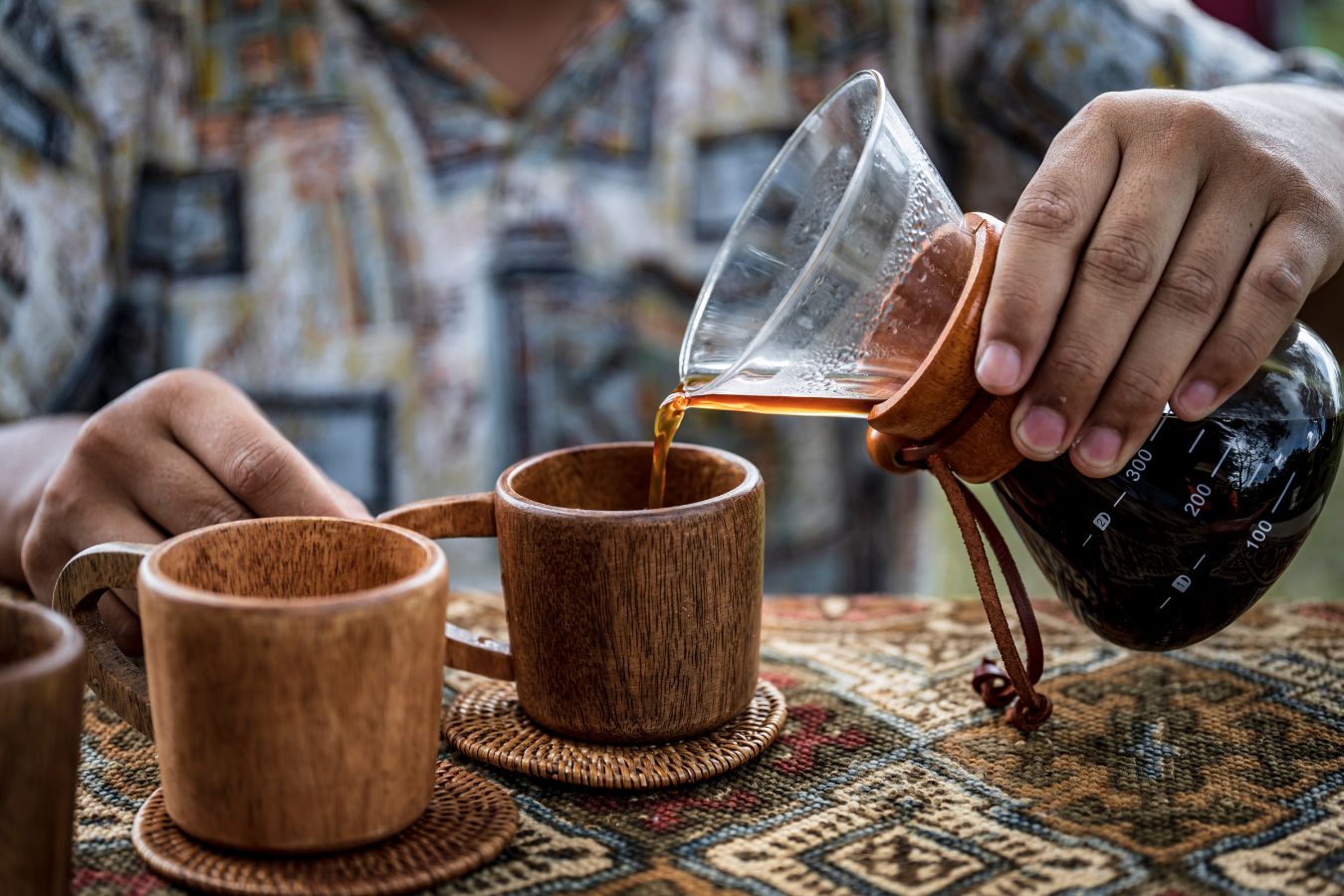 Adenosine, a chemical in our neurological and endocrine systems, aids in regulating our daily sleep/wake cycles. Adenosine is made and stored gradually throughout the day, and when it is needed, it is released, making the body tired and wanting to rest.

Adenosine absorption can be hampered and disrupted by coffee. After drinking coffee, this is also why you feel sober so rapidly.

However, your body continues to generate Adenosine even if it is blocked. As a result, when the coffee’s effect wears off, the accumulated Adenosine is released in large amounts, making you feel notably sluggish.

Coffee makes you tired: Coffee has a diuretic impact, which you may not be aware of. Sometimes the sensation is so intense that you feel compelled to travel to “space”…

What’s difficult about drinking water to rehydrate? Things aren’t so simple, though, because coffee causes you to lose your motivation to drink water, leaving you with only “out” and no “in.”

In addition to the elevated heart rate caused by coffee, the body temperature will also rise above normal levels. Since then, the sweating process has been quickened, causing the body to lose accessible water.

Because of the factors above, your body will quickly become dehydrated, resulting in fatigue and lethargy. This condition will only improve if you drink plenty of water before drinking coffee.

Pure coffee contains no sugar, but processed coffee, including significant sugar, is feasible. This is the most crucial point to consider while explaining why coffee makes you weary.

Sugar-based preparations cause the body to produce opioids, which increase excitement and comfort while also helping to relieve pain. This is also why many individuals enjoy eating a lot of sweets.

On the other hand, life is only lovely when there is still Opioid in the blood. You will experience a gloomy, sleepy feeling that will blanket both your body and emotions after the effect. This occurs because you are so used to feeling excited that you do not want to “lower the mood” back to where it was.

As a momentary fix, you gradually gravitate to sugary treats. As a result, emotions are continually up and down, similar to riding a roller coaster, giving rise to the term “sugar rush.”

You won’t have to worry about the effect if you only use a fair bit of sugar in your coffee. Prepare yourself psychologically for coffee recipes that include milk, syrup, and sweets.

Sugar is also broken down and absorbed considerably faster by our bodies than caffeine. After only 90 minutes, you will notice the lethargy caused by the sugar overload — a far cry from the couple hours it takes to consume that coffee!

How may these negative consequences be reduced?
If you don’t want to give up your coffee habit, strive to stay to the recommended daily amount. Caffeine consumption of up to 400 milligrams (mg) per day is considered moderate. Depending on the coffee blend, this equates to two to four 8-ounce cups of brewed coffee per day.

How might these negative consequences be minimized?
If you don’t want to give up coffee, try to stay to the recommended daily amount. Caffeine consumption of up to 400 milligrams (mg) per day is regarded as moderate. Depending on the coffee blend, this equates to two to four 8-ounce cups of brewed coffee each day.

Coffee-based drinks with sugary syrups and creams should be avoided to reduce weariness even further. The use of artificial sweeteners should also be limited. It might also help to alternate one cup of coffee with one cup of water.

After lunch, try switching to decaf coffee or tea if you’re suffering from an afternoon slump.

5 Ways to Get Rid of Coffee-Induced Fatigue

Of course, for many individuals, giving up coffee for the rest of their lives is not an appealing alternative. There are, fortunately, alternative ways to minimize coffee fatigue; just a few tiny notes are plenty.

Change the way you consume coffee

Caffeine consumption for adults should not exceed 400 mg per day. This average number equates to 2-4 cups, with each cup containing approximately 250ml.

Each person’s coffee-drinking habits will differ depending on their demands and lifestyle. Some people only drink 1 cup for enjoyment, while others must drink 1 cup in the morning and 1 cup in the afternoon.

When the caffeine wears off, though, no one is immune to the effects of weariness. The habit of consuming coffee in moderation, without misuse or out of control, is the most straightforward and most efficient strategy to overcome it.

Extend your caffeine consumption. Slow down your drinking and sip little by little instead of taking a “hundred-percent” gulp like the uncles at the bar.

A thermos bottle is an excellent lifesaver if you want to practice drinking coffee more frequently during the day, as it prevents the coffee from cooling down and losing its flavor. You’ll be alert all morning without having to worry about “shocking” your system with coffee and then sliding into an idle state later.

Sugar consumption should be reduced

It is beneficial to maintain a balanced diet and keep your blood sugar levels under control. However, not everyone can afford to do so and stick with it.

Sugar sensitivity varies from person to person. As a result, it’s more crucial than ever to understand your body to select the correct diet.

Drinking black coffee or pure espresso is the safest option; they have numerous health benefits that few people are aware of.
If you’re not used to the bitter taste, don’t worry. You can reduce the quantity of sugar in your coffee by switching to Latte, Capuchino, or Macchiato, which are only made with raw milk.
If it comes with flavored syrup, check sure it’s made with an artificial sweetener rather than sugar.

That’s all there is to it in a nutshell, but any coffee enthusiast should keep this in mind. Even when kids don’t know what coffee is, the old folks’ suggestion to drink plenty of water turns out to be correct…

The recommended daily water intake is 2 liters. It may appear to be a lot, but don’t be put off by the challenges because water is already a component of your regular diet. Subtract that portion, and you’ll need to drink roughly 1 liter of filtered water.

Get rid of undesirable behaviors

Still weary after reducing your coffee intake and eliminating all sugar? The source of the problem is most likely your interests and daily routine.

A healthier diet will not help you if you only sleep 4-6 hours per night. Also, don’t try to save some alertness by drinking more coffee in the morning; it’s merely a temporary firefighting solution that’s still bad in the long term.

Other elements fuel the fire include harmful emotion overload, stress, and a sedentary lifestyle. The only effective way to balance the birth rhythm is to relax more and get enough sleep. I am learning through the body.

There are a lot of decaf goods on the coffee market, which stands for “decaffeinated.”

This is a coffee with a caffeine concentration of about 3% of the original. All other nutritional values are unchanged, and the actual coffee’s distinct flavor is preserved.

This is the best option for individuals concerned about boredom when “stopping.” You may still enjoy the great flavor of coffee with decaf coffee without worrying about the long-term repercussions.

Why is this path so incredible that it was only recently discovered and is still at the bottom of the list?

Simply put, decaf coffee is not widely available; hence it is not available in most cafes. If you want to drink it every day, you’ll need to put in 100% effort, buy a bag of decaf coffee, and filter it yourself when necessary.

Furthermore, it is simply a temporary solution; other positive behaviors cannot provide long-term benefits. As a result, don’t drink too much decaf coffee!

Using a paper filter to brew coffee reduces the quantity of cafestol while allowing the caffeine and beneficial antioxidants to get through.

Cafestol, on the other hand, isn’t all horrible. It appears to have anti-diabetic properties in mice, according to recent research.

Add a dash of cocoa to your morning cup of joe.
Cocoa is high in antioxidants and has been linked to a variety of health advantages, including a lower risk of cardiovascular disease.
To add some flavor to your coffee, add a dash of cocoa powder.

Many coffeehouses sell caffè mocha, a chocolate-flavored variation of caffè latte. Caffè mocha, on the other hand, is generally sweetened with sugar.

You may easily create your own without the additional sugar at home.

Artificial creamers and low-fat creamers should be avoided.
Low-fat and fake creamers sold in stores are typically heavily processed and may contain potentially harmful substances.

Non-dairy coffee creamers, on the other hand, have received little scientific attention. The composition of these drinks vary by brand, and some are potentially healthier than others.

On the other hand, whole, natural foods are a superior option in general.

Consider using full-fat cream from grass-fed cows instead of non-dairy creamer in your coffee.

Milk products are found to include a number of critical nutrients, according to research. Dairy, for instance, is a good source of calcium and may help prevent osteoporosis and fractures (13Trusted Source).

Make Your Coffee Cinnamon-Flavored
Cinnamon is a flavorful spice that pairs particularly well with coffee.
Cinnamon has been shown in studies to help diabetics lower their blood glucose, cholesterol, and triglycerides.
If you want to add some taste, a pinch of cinnamon can do the trick. It’s a pleasant surprise.
If feasible, use Ceylon cinnamon instead of the more common Cassia cinnamon to reduce the chance of side effects.