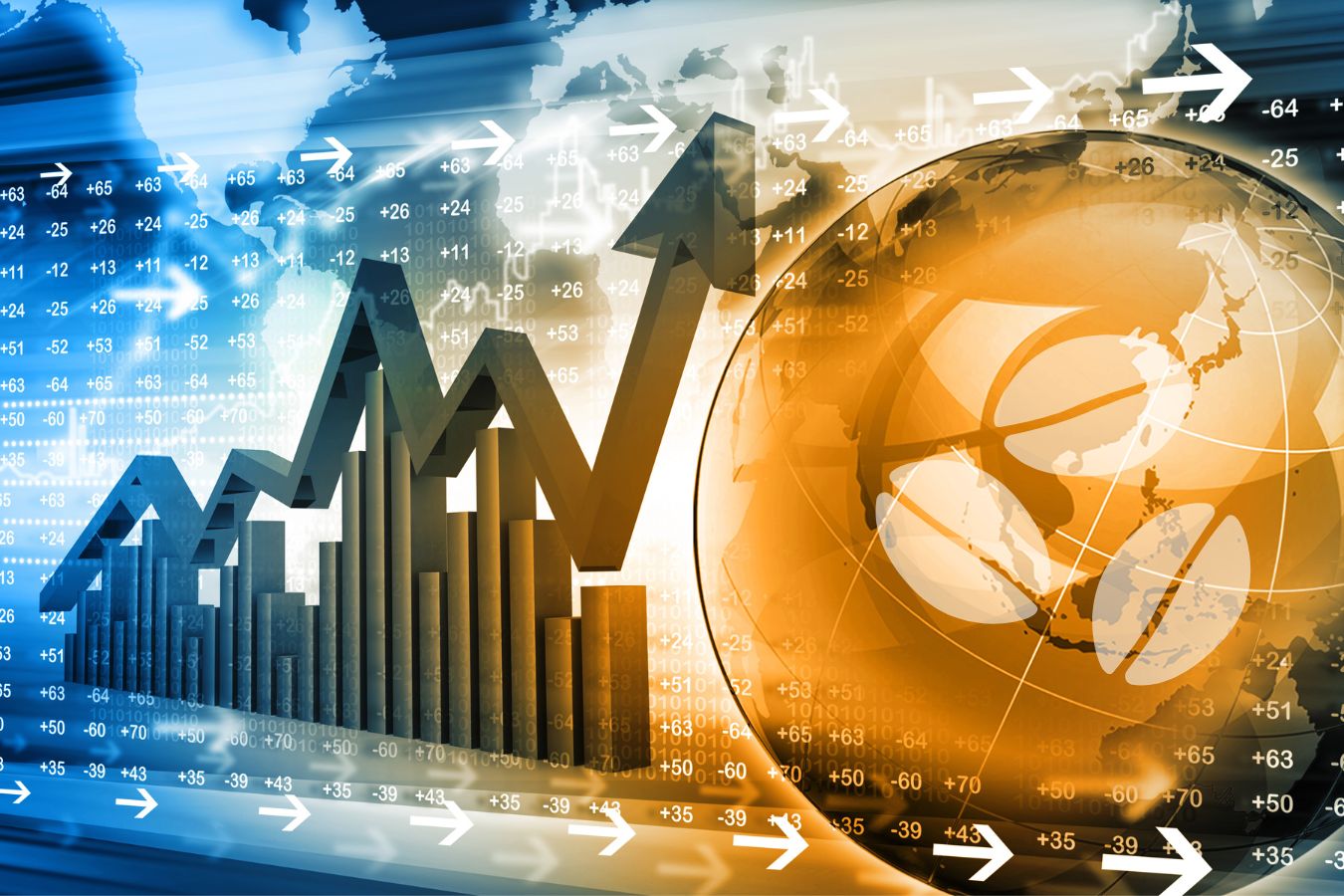 For a long time, coffee growers, dealers, and coffee trading companies in Vietnam had such a happy crop. Since the harvest until now, the market has overcome the precedents of “good and bad seasons” to maintain a continuous uptrend, leaving behind historical price milestones reached before. However, in the last two days, the price has turned down at a dizzying speed, reminiscent of the story of the market in 1994 and 2008.

In the early days of June 1994, the price of coffee in the world market increased sharply due to worries about low output. Robusta coffee prices in London on June 8 touched 3,150 USD / ton (1,869 USD/ton) – the highest until then and even today.

In the domestic market, the buying activity of businesses and agricultural product trading companies of the provinces and cities has pushed the price of coffee to fluctuate continuously with 2-3 price changes per day and raised the price extremely high at 43 million VND/ton. But this record level was only maintained for a short period of 150 minutes and then turned down to 39 million VND/ton, but no one was buying anymore. The coffee market was paralyzed; only three days later, the price was only 36 million VND/ton, and then gradually decreased.

However, the decline only lasted until the end of August; prices spiked again in September of that year when it was reported that Brazil was hit by the first frost, severely affecting the coffee crop. Next year’s output may be only 50% of the forecast. The domestic coffee price also increased and reached 43 million dong/ton; even some areas bought up to 45 million dong/ton.

But since September of that year, world and domestic coffee prices had declined, partly due to a sharp increase in output when high prices spurred people to grow more coffee.

It was not until early March 2008 that the coffee price recovered strongly and reached over 2,700 USD/ton in the world market, while the domestic price was 40.1 million dong/ton on 3/3.

Recalling that year, the market was the same as in the last months of 2010; the coffee crop in Vietnam was warned to decrease sharply; some places reported a loss of up to 40%, some areas 20%, 30%, and in general, the forecast reported that Vietnam’s production lost about 30%. The news of crop failure in Vietnam, Colombia, and Brazil caused world coffee prices to rise sharply to the highest level since 1994, right during the days of Vietnam’s Lunar New Year holiday.

The market also recorded March 14 as an unforgettable lesson when many people called it “Black Friday” for coffee traders on the London floor. The context is that, in the previous two sessions, the price of coffee increased by over 150 USD/ton, and both domestic and international markets spent a lot of ink and paper to praise coffee.

But with the sudden increase, traders and speculators strongly sold out at the end of the week, causing the coffee price on March 14 to lose 127 USD/ton; the peak and trough prices differed by 179 USD/ton. Ton. In the domestic market, the cost of coffee on March 15 was 37.5 million VND/ton, down 1.5 million VND compared to the previous day.

Like 14 years ago, the coffee market went down a few months later but turned up again in July 2008, surpassed the $2,400/ton mark, and remained above $2,000/ton until the end of the year. End of September.

The world and domestic coffee markets fluctuated strongly this year, with prices continuously going through records. The world coffee price has surpassed $2,500/ton for the first time since March 2008, while the domestic coffee price in Vietnam has left the previous high many times, up to more than 49 million dong/ton. Compared to 1 year ago, the cost of coffee has more than doubled. Compared to the beginning of 2011 and excluding the two sharp drops on March 10 and 11, the price of robusta coffee has increased by more than 20%.

However, the heat in the coffee market has calmed since setting a record on March 9 in the world and March 10 in the domestic market. World coffee prices have fallen sharply in the last two sessions of the week, losing 136 USD/ton after gaining 154 USD/ton in the previous two sessions.

After setting a record of 49 million dong/ton on March 10, the domestic coffee price quickly turned down because dealers refused to buy at the May futures price but calculated the March term with a lower increase. Much- less than $20. Up to now, the cost of coffee in Vietnam is 45.4 million VND/ton.

What happened in the last two sessions of this year is similar to 2008 and 1994 due to profit-taking and sell-off by investors, plus price pressure and unwillingness to buy at high prices of domestic enterprises and agents.

The coffee market in 2020 experienced double difficulties when the price of coffee had not yet escaped the 4-year crisis; the COVID-19 pandemic spread globally, causing many economies to freeze, leading to coffee demand coffee declines.

The shortage of empty containers also significantly impacts the export activities of enterprises.

According to the latest updated report of the US Department of Agriculture (USDA), global coffee production in the 2020-2021 crop year is expected to reach 175.5 million 60 kg bags, 7 million bags higher than the previous crop year.

Brazil will probably account for the majority of production as the country’s arabica coffee crop enters a good year of the biennial production cycle and robusta coffee reaches record production.

According to the International Coffee Organization (ICO), in the first two months of the 2020-2021 crop year, total exports were 6.5 percent higher, reaching 20.2 million bags, compared with 18.97 million bags in the same period the previous year.

In Vietnam, looking back at the whole year of 2020, the domestic coffee price fluctuated slightly in the first six months and tended to increase somewhat in the last six months of the year.

“The coffee market has experienced a four-year downtrend in a row. Therefore, I think coffee prices will recover in 2021 thanks to reduced output,”. However, whether coffee prices recover will depend a lot on the recovery of the tourism industry after the COVID-19 pandemic. “This is a huge coffee-consuming industry, so as long as the tourism industry recovers, coffee will also recover,”

According to the World Coffee Organization (ICO), global coffee exports in the crop year 2021-2022 (October 2021 to September 2022) reached nearly 129 million bags (60 kg/bag), a decrease of 0.4 % compared to the 2020-2021 crop year. Exports of Brazilian arabica and Colombian arabicas recorded declines, while exports of robustas increased 2.6% year-on-year to 42.2 million bags.

According to VICOFA, the coffee year 2022-2023 has entered the harvest season, which is the start of a new business year amid complicated fluctuations in the global market. The Chinese government still applies the “zero Covid” policy; high inflation in key coffee export markets and unstable logic are causing difficulties for the coffee industry.

Coffee prices worldwide have been showing signs of decreasing from the beginning of November until now. Ending the trading session on November 10, 2022, the cost of Robusta coffee on ICE Europe – London dropped for the third consecutive session. Futures for delivery in January decreased by 12 USD to 1,819 USD/ton, and the term for delivery in March decreased by 8 USD to 1,808 USD/ton.

Similarly, the price of Arabica coffee on the ICE US exchange – New York, December spot futures decreased by 1.30 cents, to 165.30 cents/lb, and March delivery futures dropped by 1.80 cents, to 162 cents. .35 cents/lb, significant reductions. The price of green coffee beans in the Central Highlands decreased from 40,300 to 40,700 VND/kg.

At this time, there is a lot of unfavorable information about the world coffee market. As of November 7th, the inventory of Robusta coffee certified and issued by the London exchange has increased by 350 tons, or 0.39%, from a week earlier, to 90,580 tons (equivalent to 1,509) 667 bags, 60 kg bags).

Meanwhile, Rabobank has just informed its investors about the forecast that Brazil’s coffee production in the 2023/2024 crop year may increase by 10% to 68.25 million bags due to the recent rainy weather favorable for coffee to grow the crop in 2023.

Contributing to the decline in coffee prices is also the volatility on the Brazilian political scene when the newly elected President Lula chooses to find members for the new Government, which will cause a significant disturbance. The reais plummeted 2.41% to $1 = R$1,1730, reflecting the instability of Brazilian financial markets.

Meanwhile, the market awaits October Consumer Price Index (CPI) data, which measures US inflation. Last month, this index gained 0.4% after gaining 0.1% in August. This is the number that will be analyzed by the Federal Reserve (Fed) to contribute to the upcoming USD interest rate decision. Fear of rising interest rates has made Funds and speculators not in a hurry to buy when the New York ICE price is currently at a 15-month low.

The dollar rose against most of the major currencies in the last session after the results of the US midterm elections were announced. The results showed that Democrats had dashed Republican hopes of a “red wave” sweeping US politics, prompting investors to turn their attention to the upcoming inflation data.

According to the World Coffee Organization (ICO), the coffee supply in the 2021-2022 crop year is short of about 167.2 million bags, while the demand is 170.83 million. In the coffee year 2022 – 2023, the market’s supply and demand will need to be equal; even collection will be higher than demand because Brazil, the world’s No. 1 coffee exporter, has a bumper crop and a new coffee crop. of Vietnam will reach around 30 million bags, an increase of over 3 million bags compared to the previous crop year.