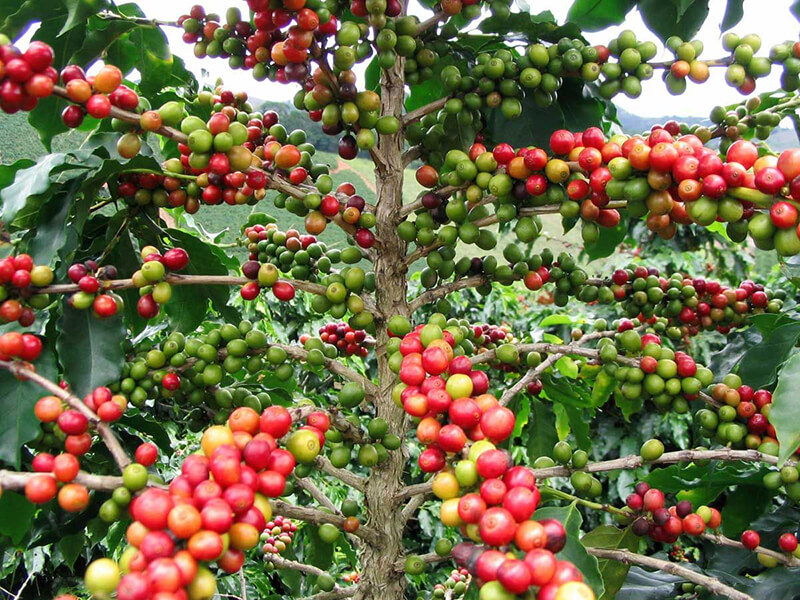 Discover coffee varieties: Batian, Bourbon, Castillo, Catimor, Sarchimor, Catuai, Caturra, Ethiopian Heirloom, Geisha, Ihcafe 90: According to statistics, there are more than 125 known varieties of coffee in the world today. However, only two have been promoted commercially, Arabica and Robusta. Particularly for the Specialty Coffee industry, the potential flavor is only exploited from Arabica coffee. Coffee varieties grown at high altitudes contain lower caffeine content but have a fuller, more delicate, and distinctive flavor than Robusta very much.

Looking at the coffee varieties in the world as a whole, many old varieties and new hybrids have been developed, bringing outstanding productivity and quality. Join Helena., JSC, to learn about unique coffee varieties with potential for quality and flavor.

Batian is the latest variety developed in Kenya, named after a mountain peak in the country.

Announced in 2010, the Batian variety impresses its resistance to leaf rust and coffee leaf rot, providing excellent flavor quality. This variety is expected to grow in popularity in Kenya and can become the most popular variety on all Kenyan farms in the coming years.

This is a natural mutation of the genus Typica. Bourbon is named after Reunion Island (then known as Il Bourbon), where the French grew Typica trees after natural modifications.

This variety has a higher yield than Typica, so it is widely applied. Bourbon coffee cherries are also quite different, usually yellow, red, or pink. Bourbon varieties have a balance with complex acidity.

Castillo is named after researcher Jamie Castillo, who helped develop the coffee variety in 2005 by Cenicafe, Colombia’s Center for Coffee Research.

Castillo was designed to improve the ‘Colombia’ variety, which is resistant to rust (Roya), and quickly became the most grown coffee in Colombia. High yields, resistance to rust and other joint diseases, and trim stems allow for high-density planting.

Catimor and Sarchimor are examples of backcrosses. This variety has characteristics and genetics from many species (arabica and Robusta).

These varieties have traditionally been of lower coffee quality than others, but they are essential to coffee farmers greatly affected by coffee leaf rust and berry diseases. Get high.

Catimor is a hybrid between Timor and Caturra, while Sarchimor is between Villa Sarchi and Timor.

Created by the Instituto Agronomico do Campinas in Brazil, Catuai is a hybrid between Caturra and Mundo Novo.

The name comes from the native Tupi-Guarani language in Brazil, which means “very good.” This is a high-yielding crop that can be grown densely; it accounts for almost 50% of Brazil’s coffee production.

High yielding variety, resulting in a cross between Mundo Novo and Caturra. This tree is small; the side branches are often very close to the main components. The fruit of this tree does not fall easily, suitable for areas with wind or heavy rain. Catuai also needs adequate care and fertilization.

The tree is very susceptible to leaf rust. The higher the altitude, the higher the quality, but the lower the yield. The variety matures faster than traditional varieties such as Bourbon and Typica, with higher yields due to soft stems and close spacing between branches. Caturra is suitable for many environments but grows best at 600 to 1,500 m with an annual rainfall of 2500 to 3500 mm.

Ethiopia Heirloom is the name used to describe indigenous heirloom varieties resulting from crossbreeding between species and varieties rather than being derived from a specific breed.

It can be defined more broadly as “Ethiopia Landrace” coffee. A landrace is a traditionally domesticated, locally adapted variety of an animal or plant species that have evolved through adaptation to the natural and cultural environment of agriculture and colonialism. Pastoral, and due to isolation from other populations of the species.

An exceptional high-quality variety is grown throughout Central America; Geisha is named after the town of Geisha in Ethiopia, where the seed originated.

This variety is of high quality, low yield, and requires strict and detailed cultivation conditions. For these reasons, it is often sold at a very high price. Geishas are relatively disease-resistant in most growing areas.

Developed in the 90s by the Honduras Coffee Research Institute, IHCAFE 90 is a cross between Caturra and Sarchimor, adapted to growing conditions in Honduras.

What Is the Typica Coffee Variety?