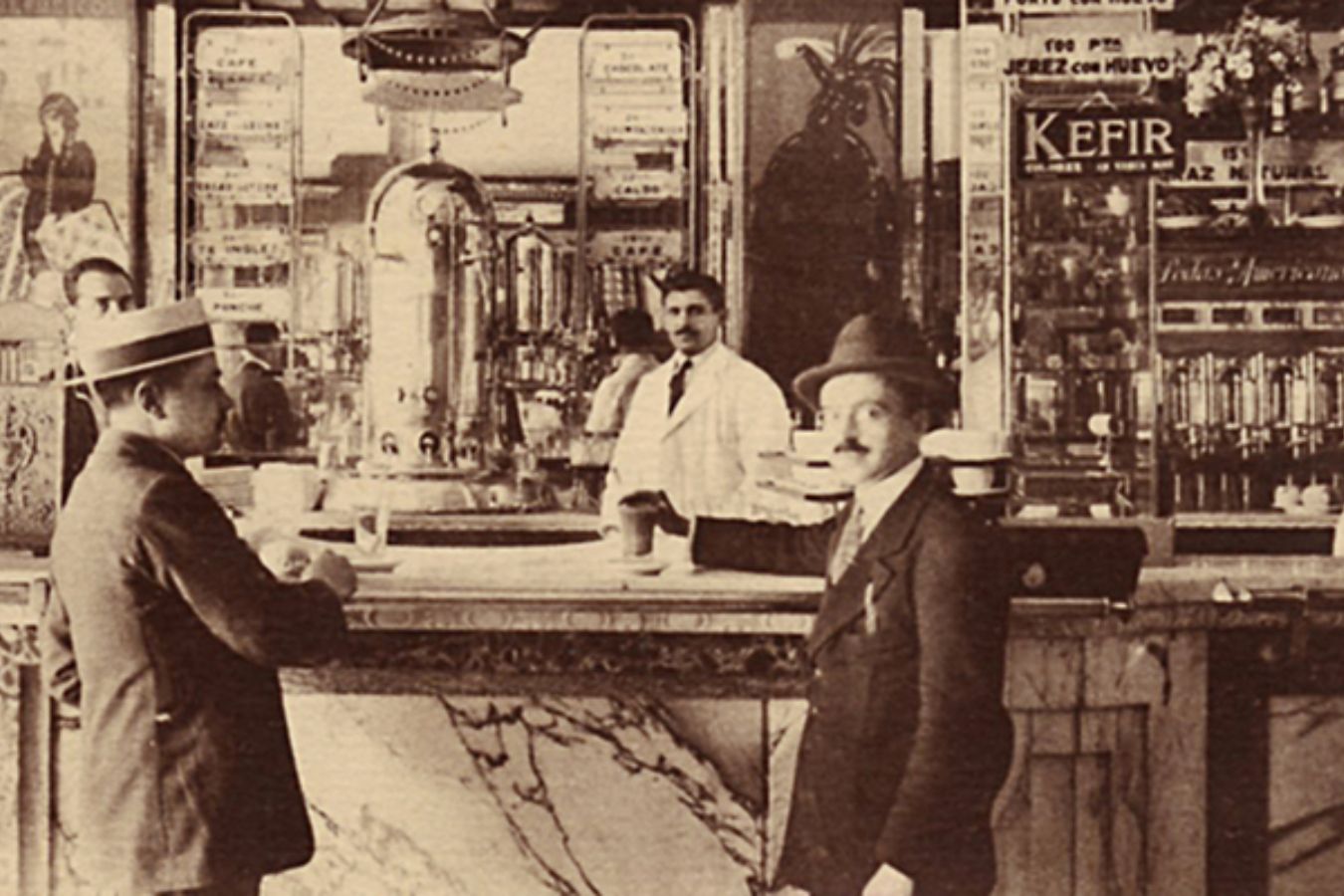 Since 1938, with Gaggia’s lever design, espresso machines have overcome the pressure barrier, completely separating from the water boiler.

Then continue into the era of electric automation with the name Feama E61 – one of the most influential espresso machines in history.

Throughout the 19th and early 20th centuries, machine designers and the general public believed that steam was essential to achieving excellent coffee flavour.

Today, we know this to be false – on a modern machine, the steam only comes into direct contact with the milk, never with the ground coffee. Furthermore, stovetop coffeemakers that use steam to push water through the coffee layer produce bitter-tasting coffees.

The attempt to create pressure without using steam – with a hand pump has resulted in some exciting patents. But when looking at the history of coffee machines, the air compressor never became a big deal.

The problem is that air is very compressible, while water is entirely incompressible.

Although Espresso machines became smaller and more efficient because there was no improvement to create a machine that can brew coffee with more than 1.5 – 2 bar pressure and does not “burn” the coffee get high.

Pavoni has dominated the coffee machine market for more than a decade despite the above shortcomings because few would consider it a serious drawback; Espresso is still a favourite among residents of the Milan area. and surrounding areas

In the growing competition in the coffee machine market,  Desiderio Pavoni teamed up with inventor Pier Teresio Arduino to find a way to make espresso without relying entirely on steam.

Pavoni conceived the idea of ​​espresso machines that combined piston and screw air pumps; although they were inefficient, history has instead credited him with a variety of contributions to espresso machines.

During the world wars, innovations in the coffee stalls. Authorities in Italy are increasingly suspicious of anything foreign, especially perceived luxuries like full-sized espresso machines.

These attitudes significantly slowed espresso machine sales in Italy until the end of World War II.

According to food historian Jonathan Morris, these price limits have shifted the business model, keeping bar owners from investing too much in coffee machines and quality ingredients.

The period of war caused significant deadlocks for some great ideas. For example, as soon as the Second World War began in 1939, Guiseppe Bambi, founder of La Marzocco in Florence, applied for a patent for the first horizontal boiler design.

In addition to the apparent ergonomic improvements for baristas working behind the bar, the horizontal boiler design also offers a significantly larger surface area for placing the cup warmer.

This is very important to keep the cups warm.” – Enrico Maltoni, author and collector of coffee machines, books and patents.

The first man to overcome the 2 bar pressure barrier was  Giovanni Achille Gaggia  (1895 – 1961), with an espresso machine and a “ lampo ” lever. A real revolution has begun, which marks the beginning of the modern Espresso era.

Achille Gaggia, a Milanese bar owner with a unique taste in coffee, has applied for a patent for “ Lampo ” – a liver assist device.

Unfortunately, this idea was not easy to implement: The only solution was manufacturing coffee machines that brought that innovative system.

Achille Gaggia applied for his second patent for the “ lever-piston ” in 1947. According to Gaggia’s principle, the steam pressure in the pot brings water into a cylinder, and a piston further pressurizes it through the barista’s leverage.

A piston significantly increased the water pressure, from 1.5 – 2 bar to 8 -10 bar, while also giving out precisely one ounce of water (about 28 ml).

More interestingly, from this period, Achille Gaggia’s coffee machine gave birth to new terms such as: ‘ Barista ‘ (once called Barman) – barman and ‘ shot espresso ‘ or ‘ pulling a shot ‘ …

But perhaps most importantly, the invention of the high-pressure espresso machine led to the discovery of Crema – the foam that floats on top of an espresso.

In the early stages, some users were confused and claimed it was “coffee dregs” floating in their cups. Until Gaggia defines it as “ Crema caffè ”, an indication that the coffee is high quality.

Today Crema (the word has been converted into English) is considered to be the defining organoleptic characteristic of Espresso coffee; At the time, however, this emerging beverage was renamed “ Crema caffè ” or cream coffee to distinguish it from the water extracted from previous espresso machines.

Over the next decade, innovations in the industry took place at a remarkable pace as manufacturers tried to adapt and improve on new technology.

After disagreeing with Gaggia over strategy, Valente began manufacturing his coffee machines.

Gaggia sees its machine (and the Crema caffè it makes) as a product for the high-end market, while Valente wants to expand the market for espresso by designing cheaper devices.

In 1961, he introduced a radical improvement on the Faema E61 electric espresso machine with an electric pump operated by a simple on/off switch.

Faema E61 has more changes in operating principle; instead of relying on the manual pressure of the barista, E61 has used a pump to bring water through a system of spiral copper pipes (chicken intestines) inside the boiler to heat to the required temperature and pressure.

This way, the pressure has reached 9 bar as a prerequisite for pressure adjustment of flavour.

The glass on the front of this espresso machine is the best part – it has a classic Italian look that reminds us of young Ferraris & Sophia Loren – chefsteps.com

This machine is capable of “continuous operation”, producing cup after cup of coffee without pausing to warm up the boiler – this makes it an “espresso” service. The E61 was a quick success and became one of the most influential espresso machines in history.

In 1970, Giuseppe Bambi from La Marzocco again developed the Espresso GS, the first two-boiler series, one dedicated to steam extraction (whisking) and the other for extraction.

The dual boiler design allows for even better temperature stability and extra volume. The GS remains the basis for modern espresso machines today.

Due to the rapid development of electronic technology over the past few decades, today’s espresso machines are more complex than ever.

Fully automatic “ super-automatic ” devices are the next step for Espresso; they can grind, measure and brew coffee automatically, creating a complete Espresso at the touch of a button – hence eliminating the need for a trained bartender.

A machine does not make authentic Espresso!

There are certainly a few more steps on the way to today’s espresso machine, but here are some of the most iconic developments in the commercial history of espresso.

Over more than a century, Espresso machines have been vastly improved, with sensors, automatic electricity, microprocessors, etc. But for coffee, the role of design, science, technology, and technology is never enough.

Espresso is also an art. The barista’s talent is just as important as the beans’ quality and the espresso machine’s efficiency.

Indeed, according to the Italian National Espresso Institute (INEI); Basic espresso is the result of a specific preparation process.

In it, there is a combination of four elements: “ Macchina ”, espresso machine; “ Macinazione ”, the proper way to grind coffee; “ Miscela ”, the coffee blend and “ Mano ” are the skilled hands of the barista.

Because even with the best beans and the most advanced equipment, the extraction process depends on the taste and style of the barista.

When properly combined, these four “Ms” create a rich and elegant drink, with a light, foamy crema that floats on top of the coffee. A complicated drink with a complicated history.