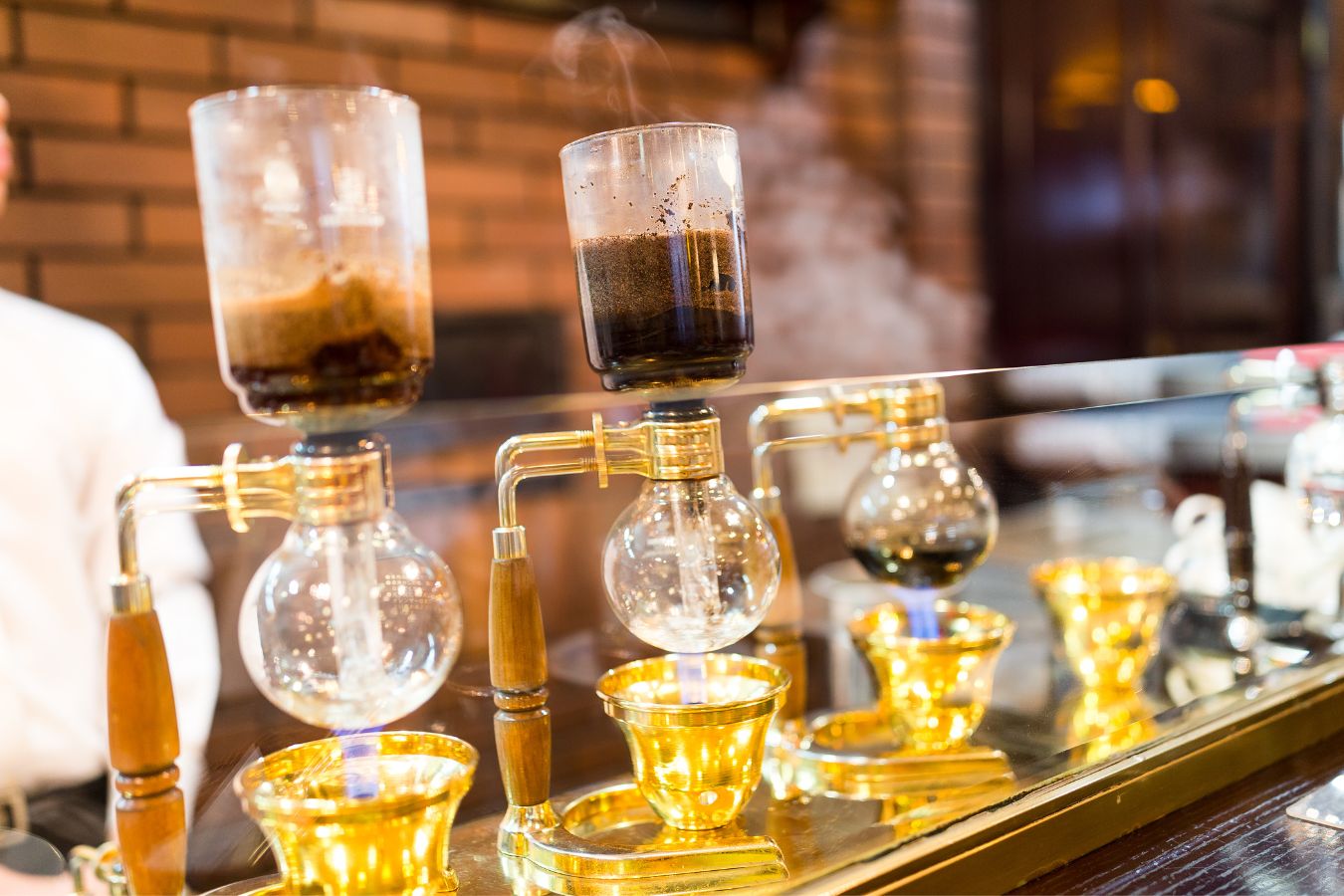 What Is The History Of The Siphon? Siphon’s history spans hundreds of years. The predecessor of the Siphon pot was the Vassieux coffee maker, born in the 1840s in France.

Through the history of siphon, and many design variations and technical advancements, Siphon has become the Apple of the coffee industry – surpassing all design standards to become a global coffee industry icon. Nearly two centuries after its inception, Siphon is accompanying the third wave of coffee, with an artistic flair for coffee extraction.

The first design in the history of the Siphon in Europe

Several vacuum-pressurized coffee machines have been used in Germany since 1830. But the earliest known patent for a Siphon coffee pot was Marie Fanny Amelne Massot of Lyons, France.

“Vassieux” was the first name for the Siphon pot in the 1840 patent application. Vassieux – The first vacuum pressurized coffee maker made up of two interconnected glass bulbs held on stand support, these are designs that most closely resemble modern Siphon flasks, although they have changed dramatically over the following 100 years.

Although the Siphon vases with beautiful decorative motifs have stepped out of the kitchen into the living room to become decorative items, there are still many problems. The most important thing is that the glass material at that time did not have good heat resistance, so it was easy to explode and break during preparation.

So a series of invention designs were born to overcome the problem of breaking the glass kettle when boiling water completely evaporated. (Including a mechanism similar to the toilet flush lever to help turn off the light when the water rises to full the coffee pot)

Things became even further apart when in the 1850s the siphons were completely separated into two parts, a metal vessel + a glass vessel that was balanced like a balance and connected through a pipe.

This texture is called the Balancing Siphon. Of course, at this time, many people didn’t like the Balancing Siphon so it has drifted into the past. Only available in select collections, or sold on Amazon as a decoration rather than coffee enjoyment.

The Reinvention of the Siphon in America

When the vacuum coffee pot re-emerged in the early twentieth century, it was accepted as a new American invention, despite its long history in Europe. This was also the period that saw the dramatic development of vacuum coffee pots, and a series of inventions were born, which brought the Siphon to its peak before settling down in the 1950s.

The first vacuum coffee maker design, patented in the US by James Van Marter in 1898, consisted of a metal vessel underneath with a cylindrical glass vessel on top. Or vases fastened together with linen. Again, this design is not entirely new and looks to be a copy of the vacuum coffees popular in Europe in the 1850s.

1914 – a tool called Coffee Percolator was invented by Albert Cohn. And this time there is absolutely nothing new here. The pure design “descendant” of the first Vassieux vase was invented in France, maybe – it was invented in America.

A new twist from heat-resistant glass

In 1915, a vacuum coffee maker was made from Pyrex, Corning Glass Work’s new heat-resistant glass. And sold under the name “SILEX“, the name stands for the words: “Sanitary – Clean”; Interesting method of making – Interesting method; Luscious coffee – Good coffee; Easy to operate – Easy to use; X-ray transparent – ​​Transparent.

This is considered a new turning point for Siphon flasks. With heat-resistant glass, Silex pots have overcome the problem of their predecessor Vassieux from France to become a popular vacuum pressure coffee maker in restaurants and hotels… As a result, today the name Silex is as popular as Siphon.

The main competitor for Silex coffee makers at the time was Harvey Cory’s Glass Coffe Corporation in Chicago and Illinois. Harvey Cory’s first patent was a vacuum coffee pot in 1933 and was quickly followed by a series of new designs, many of which focused on peripheral design elements. of the filter jars including frame, handle, filter, …

The era of electricity and automation on the Siphon

The mid-1930s-1950s saw the rise of names like Cory, Proctor Silex, and Sunbeam as one of the most prominent manufacturers in the application of new materials and auto-electricity to the vessels Siphon.

Several designs of electric siphons are patented by the company Silex, with a special stabilizing mechanism designed to keep steady on moving vehicles such as ships and trains. The inventors of the flask of this period struggled with the new problem of determining the right time to cool down the flask.

However, several solutions have been proposed, with the use of thermal sensors (Chester Hall – 1936, Hermann Lemp – 1937) and mechanisms that sense vessel vibrations caused by steam.

In the history of siphon, the 1940s saw several improvements in the design of siphon flasks, including Harvey Cory’s “Rubberless” patent (in 1942) with the use of a rubber gasket between the two flasks’ glass.

Even more remarkable, during the 1940s and 43s, the coffee industry saw the emergence of Sunbeam’s Coffeemaster product line – a series of successive generations of shiny chrome siphons combined with an electrical system. automatically, brewing coffee with Siphon has never been simpler.

By the mid-1950s, profits from Siphon flasks dwindled and the number of patients dropped significantly after about 1951 as users quickly and economically switched to electric filters.

The Renaissance of the Siphon

The first year of the world’s 21st century is in the history of Siphon the excitement of it. The movement was started by true coffee connoisseurs and the Art Deco movement of the time.

A few companies still produce and sell simple handmade vacuum coffee pots with original designs in Europe, especially Asian companies like Hario, and Yama, This is an example. Best for simple designs that have the most longevity, the handmade Siphon vase has never been forgotten after going through countless designs, modifications, and influences by technology.

The historical wheel has reached the end of the road for 200 years, there is rarely a coffee processing method as popular and long-lasting as Siphon. Although there are moments when the harmony boils and settles like original activities, the history of the Siphon has never been forgotten. And the limit of coffee before the third wave remains in the brewing experience with the Siphon pot in the next records?

You can learn more about siphons here

Tags:Historical of siphonWhat Is The History Of The Siphon
Share