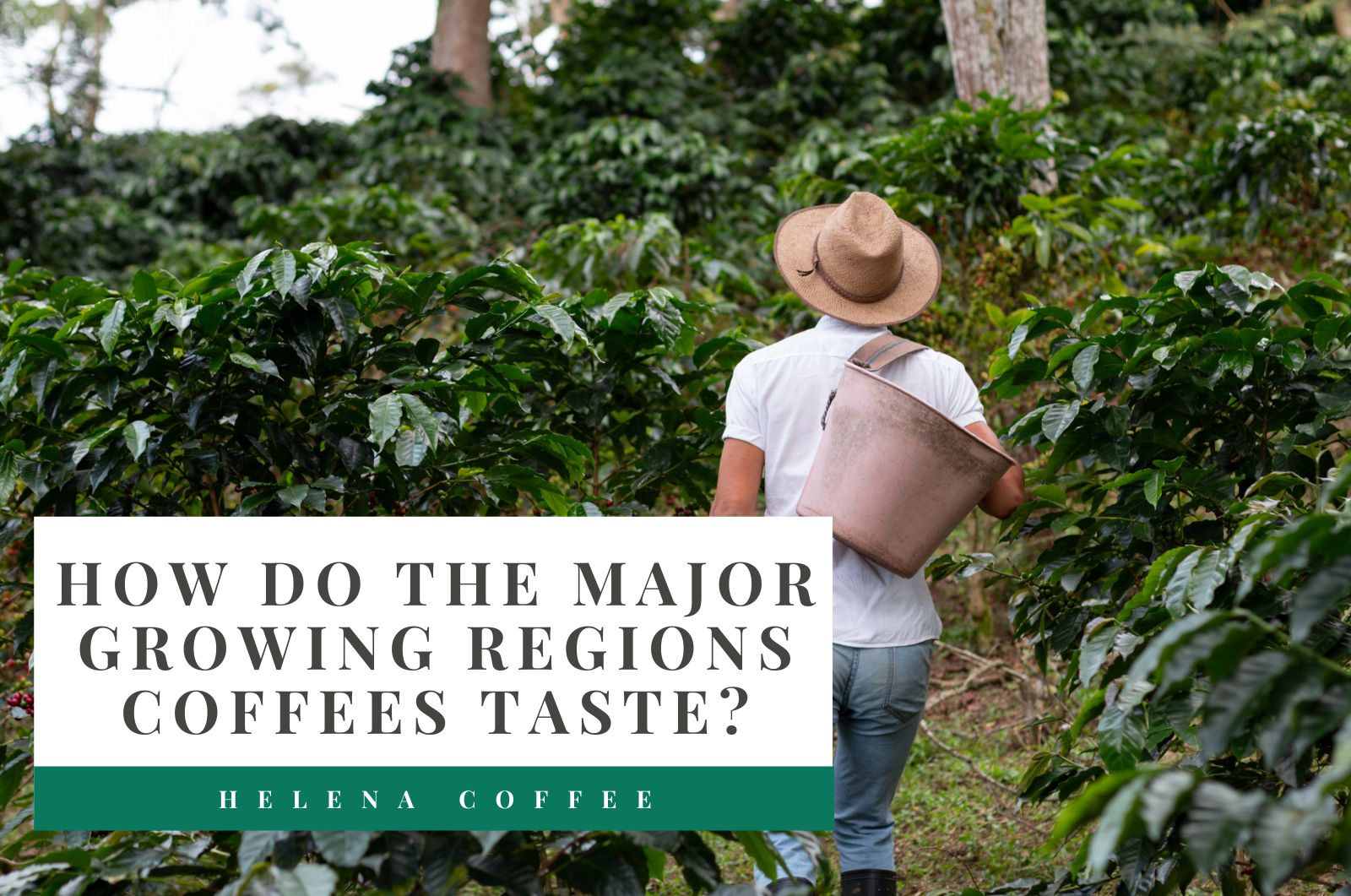 How Do The Major Growing Regions Coffees Taste? – For the moment, assuming everything else is equal, we can make some generalizations about how coffees from various regions of the world would generally taste based on experience, customs, traditions, and, well, the generally unwise act of presuming.

In a nutshell, how do coffees from different parts of the world taste? How do you distinguish Kenyan coffee from Guatemalan?

The similarities and differences in coffee flavours may exist for a variety of reasons, including the fact that some coffee varieties are frequently more common in some coffee-growing regions than others or that processing technique are commonly shared among growing communities or climates based on local access to water, mills, and other considerations.

We can reasonably assume that there will be some similarities between them—at least more so than either will have with, say, coffees from Indonesia or Kenya. This is because coffees in Guatemala are frequently botanically somewhat similar to coffees in Honduras and because both countries’ farmers tend to process their coffees in a particular way (washed).

The following information is only a general overview of various flavours and does not necessarily apply to all coffees. Additionally, roasting and brewing are not taken into account, which will also significantly impact the qualities a coffee exhibits.

Except for Belize, Central America as a whole makes up a significant portion of the world’s supply of coffee, and along with its southern neighbour Colombia, it is this region’s coffee that has had the most crucial influence on North American coffee consumption tastes and practices.

Since Guatemala and Honduras are significantly closer to the United States than any African country that produces coffee, purchasing from them is more straightforward for us than shipping beans across the vast Atlantic.

We can anticipate cup qualities from this region to contain varying amounts of acidity (more apple-ish and malic in Guatemala; cherry-like from Mexico), as well as a smooth, sugar-browning sweetness that is occasionally soft like chocolate or buttery like flaky pastry crust.

This is due in part to similar climate and altitude, processing methods, and the variety of coffee varieties grown here. These coffees are frequently described as having “balance,” Their fruit-like qualities often work well as a light backdrop to the flavours of cocoa and spice.

Colombian coffees are frequently associated with South America, and with good reason: The nation consistently ranks among the top three coffee-producing countries in the world.

As with other higher-quality coffees from Peru, the traditional Colombian character combines a mild acidity with a potent caramel sweetness, sometimes with a nutty undertone. They have the most recognized coffee flavour and are sweet and medium-bodied to most North Americans.

Why should Brazil remain independent when the rest of the Americas are categorized into more significant regions? The nation is a major producer, and its output range is considerable.

Some Brazilian beans, particularly those labelled “Brazil natural” or pulped natural, have a solid peanutty flavour and heavy body, making them popular additions to espresso blends. The characteristic flavours include chocolate, some spice, and coffees that have a lingering aftertaste compared to other South American regions’ offerings.

Okay, so why should Ethiopia have its category as well? The county has significantly more incredible biodiversity than the state does: Many of the thousands of coffee kinds that grow here are wild or uncatalogued, which means that the range of flavours is potentially considerably more comprehensive.

With the probable exception of Brazil, processing varies even within Ethiopia: In Ethiopia, coffees can be processed as “natural,” in which the cherry is dried around the coffee bean before being removed, or “washed,” in which the fruit is stripped within 12 hours after picking.

Washed coffees typically have a floral, delicate flavour, but natural coffees usually have a fruity, heavy, wine-like flavour. These two methods produce flavours that are remarkably distinct from one another.

Ethiopian coffees that have been naturally processed frequently have a syrupy viscosity and a thickly sweet berry flavour, usually blueberry or strawberry. Washed coffees are lighter and drier on taste, and they often exhibit jasmine or lemongrass flavours.

Kenyan coffees are known for being big, bold, and juicy. This is due to their variety (SL-28 and SL-34 are the most highly desired), processing (there is a post-fermentation soak that can last a day or longer), and the fact that a large portion of the coffee is cultivated in the open.

These components—and undoubtedly a significant number of others—combine to give Kenyan coffees a mouthwatering savoury-sweet flavour that can occasionally take the form of a tomato-like acidity or a black-currant tartness. Good-quality Kenyan coffees nearly always have a tropical flavour, and many coffee experts will confess they are a favourite.

The coffees from Indonesia tend to have a rich, dark, almost meaty earthiness, again the product of diversity, processing, and climate. Particularly Sumatran coffees respond well to dark roasting, so the cup frequently has roasted and smoky notes. Others will have a lengthy, lingering finish that tastes like extremely dark or unsweetened chocolate and has a stouty or mushroom-like richness that is both savoury and herbaceous.

(Both organically processed Ethiopians and Sumatran coffees have a “love or hate” appeal; those who adore them are wholly devoted to them, while those who detest them are horrified. They resemble cilantro in the coffee industry, I suppose.)

What different local coffee tastes are you interested in? Take note that these generalizations should all be taken with a grain of coffee. Every rule has an exception, and all we can hope for is for those exceptions to be delectable.