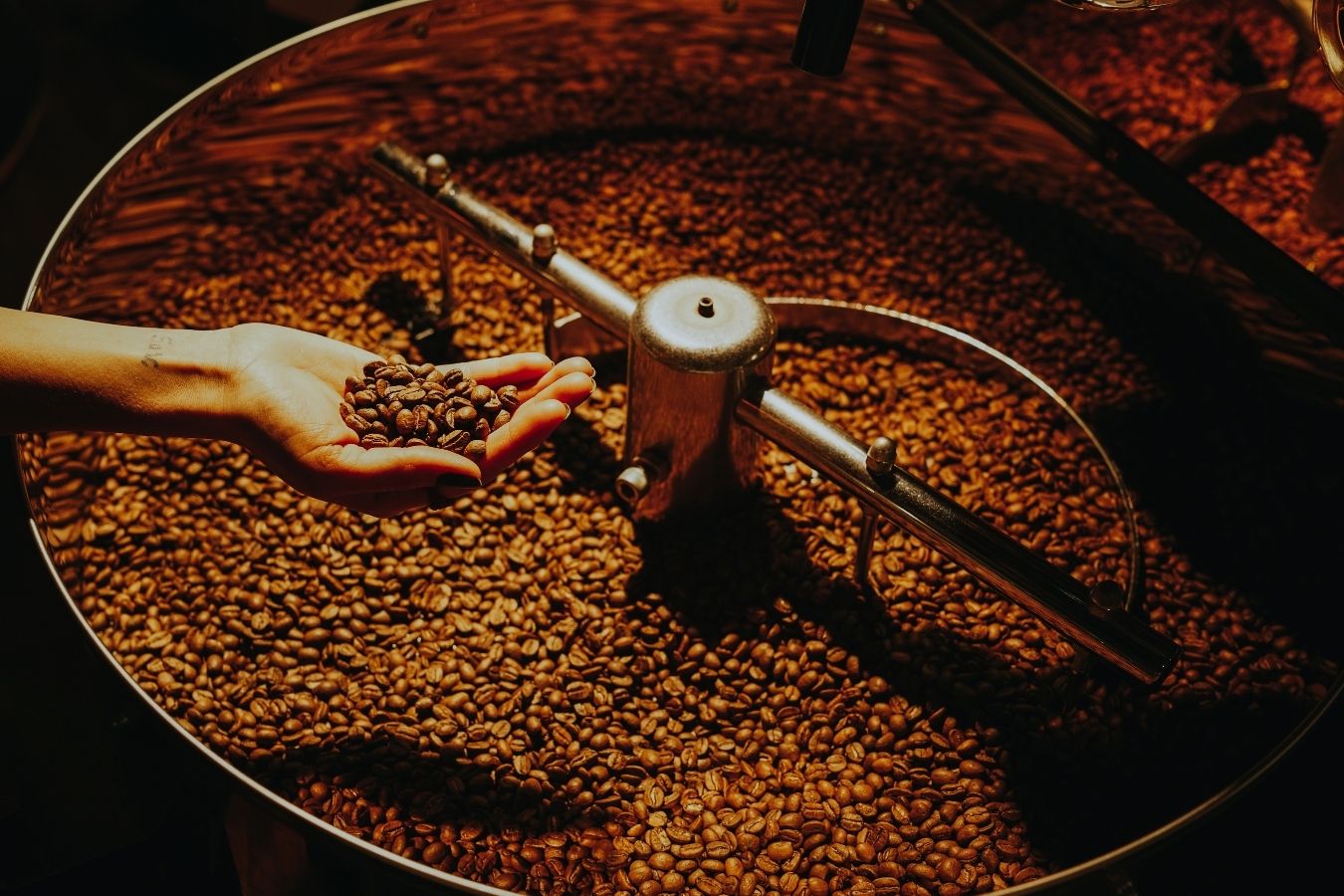 The first stage of roasting is known as the “drying phase” of the beans, although throughout the roasting process, the moisture content of the beans will decrease at a similar rate.

During the first few minutes of roasting, the loss of chlorophyll causes the seeds to change from green to yellow. The sources gradually change from yellow to tan to light brown, mainly because of the Maillard reaction.

The brown color will deepen after the seed is close to the first crack due to caramelization. The carbonization process can cause the beans to turn black for dark roasts.

The microstructure of unroasted coffee beans is relatively dense and organized, with oils encapsulating the cellulose matrix. When the coffee is roasted, the formation of steam and CO2 increases the pressure inside the bean, causing the bean texture to swell.

A few minutes before the first crack, the seed will swell to the point where it can release the silvery shell that is rolled into the core of the source.

When the grain’s cellulose can no longer expand, gas and water vapor violently escape from the fissures inside the grain and on the grain surface, thereby creating the crackle of the first crack.

Specialty roasters who often want to create a light or medium roast will usually stop roasting at the midpoint of the end of the first crack and the beginning of the second crack. Gas generation continues between these two stages, regenerating pressure within the grain.

Meanwhile, the texture of the seeds will become more brittle, preparing for the second crack stage. At this point, the oil will flow to the beans’ surface, which is a signal of the beginning of a dark roast.

Water makes up about 10 to 12% of the processed and dried green coffee beans, but the moisture content drops to less than 5% after roasting.

Loss of moisture and the conversion of some dry matter to gas is why green coffees have a reduced overall mass after roasting, losing about 12 to 20% of their weight on average after roasting.

It would be remiss to mention only the participation of water in the roasting process and forget that 16% of the dry mass of green coffee is lipids (mainly triglycerides).

And because they are difficult to evaporate, during roasting, under high pressure in the seed, these compounds move from the center of the cell toward the surface of the grain.

Coincidence is that it is thanks to the thin layer of lipids that cover the beans that volatile compounds are trapped inside the grain structure, most of which are essential to creating the aroma of the roasted coffee; without oil, they cannot—be dispersed in the extract.

In some cases, the whole beans can contain up to 18% lipids. Lipids are present in the cytoplasm of the coffee bean and are protected by a separate membrane along the cell wall.

Changes in the structure of coffee bean tissue during roasting will destroy the biological organization of the bean cells and release lipids.

Along with the increase in gas pressure inside the bean, the coffee oil is pushed through the small microvessels in the cell wall to the bean’s surface. Since then, coffee has grown in size but reduced in volume.

We’ve long wondered what happens in a giant humming machine that is effectively frying seeds from coffee cherries for people who aren’t roasters.

It’s as simple as picking a time and temperature and letting the machine take care of the rest. Different stages of the roasting process may greatly alter the coffee’s character, and if done incorrectly, can even damage it.

Continue reading to discover more about each step of the roasting process.

Drying is a crucial step before roasting coffee. Coffees aren’t totally dried when they’re prepared and dried in the field.

To retain the quality of green coffee, roasters normally leave 10-12 percent moisture in the bean when it arrives. Because of the moisture content, a final drying process must take place after roasting.

The phase of Coffee Drying

After preheating the drum, or establishing a charging temperature, the beans are dropped from above into the drum, where the coffee begins to dry instantly.

Keep in mind that time and temperatures are often determined by the procedure, density, and other characteristics of the coffees in question.

This phase normally lasts 4-8 minutes and reaches a temperature of roughly 160°C. The beans are now in the browning stage, sometimes known as the Maillard stage.

The Maillard zone is the point at which the beans start to brown and change color. Sugars and amino acids begin to break down at this point, resulting in an increase in acidity in your cup.

This phase isn’t meant to be hurried, and it’s usually taken slowly in order to get the most flavor out of the chemical processes that are taking place.

The roasting curve that is created should ideally take into account the Maillard phase’s time.

By the conclusion of the Maillard phase, the browning will be complete (the color will have changed from green to yellow, then to brown), and the first crack will have appeared. This is a sign of progress, indicating that the bean is beginning to expand up and become less thick.

Coffees begin to expand and open up throughout development by caramelizing and releasing sugars and other chemical substances. We know the bean has started to mature when we hear the first crack.

The beans begin to break like popcorn, indicating that this is the case. We want to prevent a rolling crack, which occurs when the beans break at various times, and instead strive for a roasting curve that permits all of the beans to crack at the same time.

The first crack usually occurs after around 6-7 minutes.

Development timelines may vary depending on the amount of roast we’re going for. We usually stop the growth process after the first crack for mild roasts.

Our development time will be a few minutes longer for medium roasts. We normally retain the beans within the drum just before or after the second crack for espresso and dark roasts.

The last step before we let the coffee settle and package it is to cool it down. The coffee is now discharged from the roaster and into a circular space underneath the roaster, which is cooled by a fan.

This enables the coffee to cool and prevents it from being over-roasted. This also enables us to eliminate any roasting faults such as Quakers (under roasted coffee) or scorched beans (overroasted/burnt beans) as a last step in the grading process.