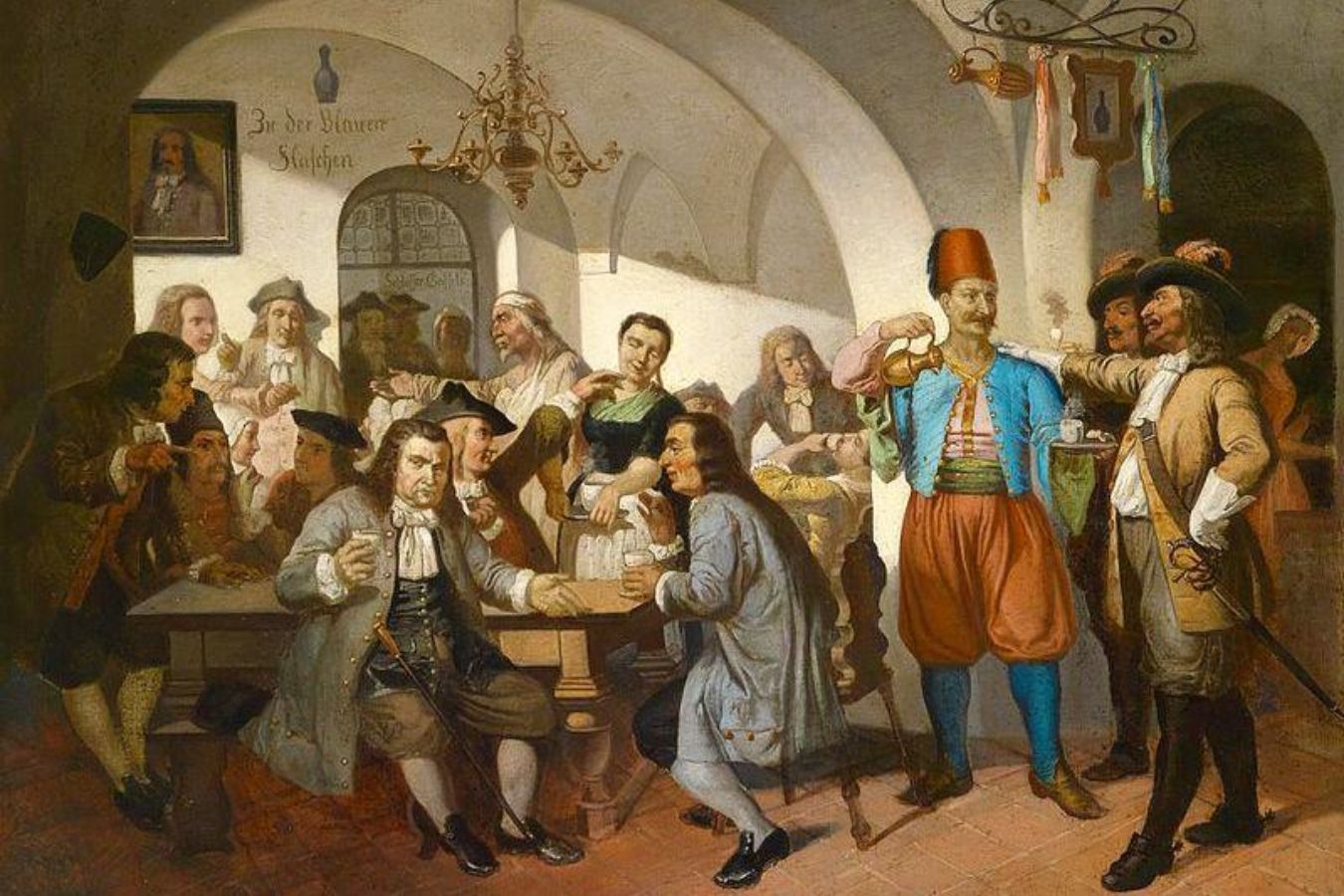 Social Imprints From The First Coffee Shops: Through many times and places, coffee shops have been one of the leading public venues for members of society to meet, discuss politics, engage in business, pursue the arts, Or simply chat with people. With such a culturally significant role, the coffee shop has become the basis for many social transformations. Over the centuries, the lifestyle and social developments at Coffee houses have changed a lot, but at the same time, some values are rarely lost.

The most fundamental and valuable attribute of coffee is its stimulant properties. For some people the thought process may begin and end here. Indeed, the dramatic rise of coffee shops during the Enlightenment was fueled by the power of Caffeine .

Accordingly, the first records of coffee consumption date back to the mid-15th century, when Sufi (Arabic) mystics began using a beverage to keep them awake while praying throughout the night; it is prepared by boiling dried coffee pods in boiling water. When the Sufis travelled to Ethiopia, they observed that the locals used coffee like this and carried this “herb” across the Red Sea to the southern regions of the Arabian peninsula (present-day part of the Arabian Peninsula). of Yemen). The Ethiopians called this way of “making coffee” Buno, but the Sufis named it Qishr.

Ottoman, and the first “Cafes”

Although the initial role of Qishr consumption was in the context of Sufi rituals, it soon assumed a larger social purpose after the orthodox religious authorities ruled that drinking is not intoxicating (such as alcohol) and is therefore permissible for Muslims to consume. Soon, cafes spread across Arabia, creating a secular public space where people could meet and socialize as equals. Coffee cultivation began to develop in the inland mountains of Yemen; the beans were transported through the port of Mocha or across the mainland on caravans of camels.

By the time the drink reached Constantinople (the Turkish capital) of the Ottoman Empire in the 1550s, it had significantly evolved in both form and function. Coffee is made from just the beans, not the pods or anything else of the plant (perhaps because the beans are easier to transport). However, the Arabic version of the drink is still mostly boiled with water, using lightly roasted seeds with sugar. Turkish cafes at that time were popular because of the similar style of customers, by seats & by order of arrival, not by class rank.

Even the relatively poor customers receive hospitality, as they can buy coffee for their companions, thereby creating a unique social lifestyle and consumption culture. However, the cafe also faced resistance from many social leaders (most notably for smoking) leading to some such statements as “anyone who opens a cafe should be suspended.” to the door”

Encountering the Barrier of Religion – Politics

The first recorded opposition to the cafe movement occurred in Mecca in 1511, when Khair Beg al-Mimar, a prominent secular official in the pre-Ottoman regime, encountered men drinking coffee outside the mosque and doubted it. The details of the protest are unclear, but he used religious justifications to order an end to all coffee sales and consumption. Subsequent coffee crackdowns occurred in Mecca (again), Cairo (several times), Istanbul and other Ottoman areas.

However, under the rule of Murad IV – the most famously dictatorial and brutal king in the history of the Ottoman Empire – he considered that only deserters or “unemployed” would frequent the cafe and use them to plot a coup. In addition, with conservative religious ideology, anti-Sufiism and social innovations – including coffee shops are rising in his empire. Murad IV gained control by executing anyone who consumed coffee, tobacco & opium in the city (outside the capital, people could still trade coffee). It wasn’t until more than a decade after the death of Murad IV that coffee consumption resumed in the Ottoman capital Constantinople.

By the end of the 18th century, more secular meeting places had emerged, dissident groups became more entrenched, and cafes were no longer a hotbed of dissent. The ban was lifted, although the rulers still planted spies in it to spy on anti-regime conversations.

From the Osman Dynasty to Great Britain

The two functions, psycho-physiological stimulation and “social lubrication” of coffee, were quickly introduced to Europe. Coffee was brought to Venice by Turkish traders in the 1570s; until the first half of the 17th century, coffee was almost exclusively supplied by doctors and pharmacists as a medicinal herb. These guilds retained such commercial control of coffee that it was difficult to trade as a commodity for household consumption, let alone serve it as a mass drink.

During the seventeenth century, coffee was quickly assimilated into the UK’s “medical market”. Its use is promoted by apothecaries, physicians, retailers, and most importantly, by consumers of healthcare products themselves. Immediately, British consumers were introduced to coffee as new medicine and a new beverage. Although marketed as a pharmaceutical drug, coffee is not limited to medical facilities; it has also become an integral part of London’s urban cultural life and a new ingredient in pharmaceuticals. 17th Century English Dictionary – According to The Social Life of Coffee.

It wasn’t until the 1650s that the first coffee shops in Europe appeared, and even then, not on the mainland – but in London. This event can best be explained through historical context:

Up to this point, Europe has mainly relied on weak alcoholic beverages for refreshment, but they carry the risk of causing loss of control. Meanwhile, the presence of coffee as a beverage not only maintains alertness but also energizes the brain. Coffee shops quickly became meeting places for merchants who needed to keep their senses clear while working at a coffee shop – It was this purpose that gave birth to the Department. London Stock Exchange.

Coffee shops began to appear elsewhere in Europe, notably in the North Sea countries and Hanseatic Union countries such as Amsterdam, Bremen and Hamburg. In Paris, cafes began to appear in the 1690s. However, in contrast to the “Coffee House” in modern culture. In any coffee shop in the 17th century, one can find wine and beer, with new hot drinks such as coffee, chocolate or tea. Along with its drinks, cafes offer a place to smoke – another exotic drug whose consumption is increasingly common; smoking is a natural complement to drinking clear coffee seventeenth century.

Austrian writer Stefan Zweig describes the Viennese cafe as: “A kind of democratic club, open to everyone with a cheap cup of coffee, where every customer can sit for hours talking, writing, and talking.” playing cards, letters, Vienna’s cafes are the setting of famous literary works, where writers such as Peter Altenburg and Karl Kraus worked, and a place for intellectuals, intellectuals and academics. Scientists, politicians and artists like Sigmund Freud, Alfred Adler and Leon Trotsky would spend many hours. Thereby, the cafe creates a common meeting place for everyone in society.

The first official appearance of the cafe in France was in 1689 with the Café de Procope. The French initially rejected coffee and its related forms due to its bitter taste, high price, and aversion to Islam and the Ottomans. Landweber argues that a complex process occurred in which coffee was once transformed into a “French style” while celebrated as exotic. The French added milk to coffee, separating the drink from its solid Ottoman roots. As for the cafe, they add a touch of luxury with “marble tables, large mirrors and fancy chandeliers”.

When Francois Procope (founder of Café Procope ) died, his son took over the cafe; after more than two centuries, anyone with a reputation in art, politics, science or literature visited. Visit Café Procope. Earlier in the 18th century, it was often visited by French philosophers. From Voltaire to Rousseau and his friends like Diderot, Beaumarchais, Balzac, Victor Hugo , etc. They all frequented here – along with Napoleon Bonaparte, the cafe was the birthplace of the basic ideas of the French Revolution.

Drinks for an Awakened Europe

The democratic aspect of the cafe is also an essential part of inheriting attributes from Middle Eastern culture. As a news exchange, messengers are often welcome at the cafe. The latest advances and discoveries in nascent research fields such as biology, geography and science also come from there. As a prime example, Isaac Newton founded the Royal Society – Britain’s leading scientific organization (and the oldest in the world) from a coffee shop.

It was easy to define what a cafe was at the dawn of the eighteenth century: A place where people gathered to drink coffee, learn about the news of the day, meet local residents discuss and discuss issues of mutual interest – The Social Life of Coffee

Coffee offers a stimulating yet sober start to this point, allowing it to replace beer and wine as the discerning drink of choice by many European bourgeois families. During the 18th century, coffee expanded into Dutch territories in East Asia, notably Java and the French colonies of the Caribbean, Martinique;.. Above all, Saint Sebastue (present-day Haiti) rapidly became the world’s leading source of coffee.

When coffee entered Europe, specifically London, in the 17th century, conversations and gatherings remained central. At first, the cafes were only open to the elite, but in the 18th century, they became social and commercial gathering places. Over time, these coffee spaces have diversified and become more accessible to the community. “The Coffee Houses” remains a place that allows social interactions at all levels; this interconnected nature of coffee continues to expand and change through contemporary representations such as Starbucks of America or Fika in Sweden.

Essentially, it’s a “third place” outside of family and work, where colleagues, confidants or friends capture personal-community issues or simply as a daily routine day. And while coffee can be seen as a social drink, it is still enjoyed by the individual, allowing himself to relax or reflect. A property that seems to be found only in coffee.