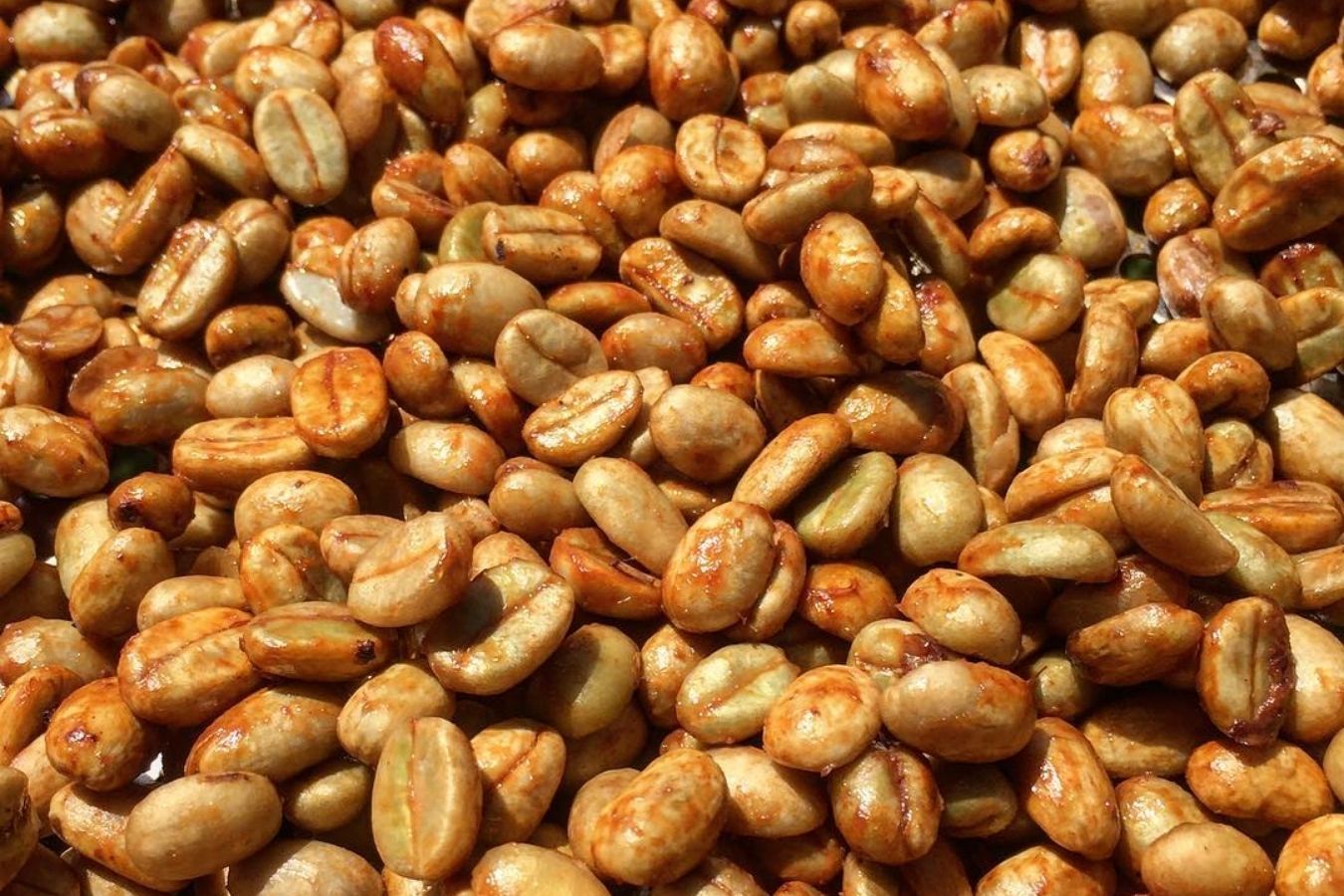 Pioneers in the specialty coffee movement

When Alfred Peet was laid off at the age of 45, he opened Peet’s Coffee & Tea in 1966 in Berkeley, unaware that he had sparked the resurgence of the coffee industry. This store inspired and sponsored the birth of today’s Starbucks empire. Around the same time, Peet opened the above coffee shop. In New York, Saul Zabar (who is in the food business), after unsatisfied experiences from roasters, opened White Coffee Corporation in Long Ireland, specializing in supplying coffees from Kenya, Tanzania, Jamaican Blue Mountain with pride when they are roasted lighter than Alfred Peet.

“I think the beans should be roasted just enough to release the distinctive flavors from the main ingredients and the sourness,” says Zabar and his customers agree, his reputation has spread. throughout New York, where his mail-order service slowly began to prosper.

While Zabar and Peet introduced customers to premium coffee in 1964, Erna Knutsen – a woman of Norwegian descent – ​​was rediscovering the origins of coffee imported from unique growing regions around the world. Around the world, at the age of 40, she was a personal secretary to Bert Fullmer in BC Ireland, San Francisco, a long-standing coffee and spice importer. In the early 1970s, encouraged by her boss, Ms. Knutsen developed a small business for herself, selling sub-container (less than 250 bags) of high-quality, sub-container batches of high-quality Arabica coffee (less than 250 bags) to businesses. Small businesses roasters are springing up all over California beaches.

With constant learning, enthusiasm, and exclusive relationships with purchasing partners in Central America, Hawaii, Africa, and Jamaica, connections with roaster owners have carried Knutsen’s reputation around. U.S. While other U.S. green coffee importers struggled to make a profit, Knutsen paid fabulous prices for the finest specialty beans in return for her connoisseurs’ willingness to buy them.

In 1974, the Tea & Coffee Trade Jurnal published an interview with Knutsen in which she coined the term Specialty Coffee, to refer to the Celebes Kalossi, Yrgacheffe Ethiopia and Yemen Mocha coffees that she produced. are selling. It was this term that later fueled a new wave of coffee connoisseurs.

In the early 1970s, roasters and specialty cafes appeared in increasing numbers in the United States and Canada. Paul and Kathy Leighton started Coffee Corner in Eugene, Oregon, Bill Boyer with Boyer Coffee Company in Denver. There was Murchie in Vancouver; Timothy Snellgrove founded Tymothy’s Coffee of the Word in Toronto. The property’s wave of specialty coffees also brought young people from family coffee businesses such as Frist Colony (formerly Gill Brockenbrought ) in Virginia or Van Courtland Coffee. (a branch of Wechsler – a longtime roaster in New York). There are many more, but I’ll stop here.

With the advent of specialty coffee shops, home brewing kits, etc., coffee-savvy magazines demonstrate the public’s interest in fine coffee. For a year, British professor Kenneth Davids owned a coffee shop in Barkeley, then wrote Coffee: A Guide to Buying, Brewing & Enjoying. Readers can learn the fundamentals of assessment. In another case, Joe Schapira, with his father – David, and brother – Karl, wrote The Book of Coffee & Tea.

In 1975, a momentous event shook the coffee industry. It was snowing in Paraná – Brazil (the supplier of half of the world’s coffee production at that time). It was the worst frost in a year. century swept through this country. “The aerial view of 1.5 billion dead coffee trees looks like a giant black burn.” Although the year’s harvest has been completed, coffee trees need four years to bear fruit. The coffee market officially entered the wobble of supply and demand and malicious market manipulation activities in the past year. Many years later. But one of the unintended effects of this black frost has been a substantial boost in specialty coffees.

As prices rose in 1976-77, the gap between poor coffee and high-quality coffee narrowed. As food writer Raymond Sokolov puts it, “When we pay more than $4 for a pound for canned, factory-produced and supermarket-filled coffee, it’s time to take a serious look at the curious premium Arabica beans.”

Across the United States, consumers realize that they can buy delicious coffee for a little extra money. Furthermore, purchasing specialty coffees in a specialty store full of aromas is fun. Customers can chat with knowledgeable and enthusiastic roasters who are always happy to share what coffee is involved in and the different names, origins, roast levels, and blending suggestions. “Has anyone called Maxwell House or Folgers’ interesting’? But in specialty coffee shops, they do, and they also sell strange equipment – ​​French Melior kettles, Mellitus funnels, grinders from Germany, Italy..”

The comprehensive revolution of specialty coffee

By 1980, through the triumph of the Yuppie market – only young urbanites, willing to pay for the luxuries of an urban lifestyle, specialty coffee entrenched itself in the major cities of the East and West coasts. The West of the United States has reached far beyond suburban and rural areas. At the end of 1982, Money Magazine acknowledged readers’ interest in specialty coffees: “Rare coffee for $10, a pound almost equals wine in terms of wealth and luxury. “.

Under the domination of significant roasters, the American Coffee Association has ignored the “newcomers,” so it is almost inevitable that specialty coffee companies form their organization. Coffee enthusiasts began gathering twice a year at the National Fair organized by NASFT. Roasters from the Atlantic and Pacific started to connect. True coffee ideals from both sides of the United States met in San Francisco in October 1982 and founded the Coffee Association. U.S. Specialty coffee – Specialty Coffee Association of America (SCAA) with 42 original members.

“I appeal to all of you, stand up, friends, and assert your will. We must be united, or else we will be trampled by huge corporations just waiting to swallow us up” – Schoenholt wrote in the invitation to join the SCAA – January 1983.

Specialty coffee doesn’t fit the tidy world of retail coffee statisticians as they are usually sold in bulk or by direct mail order. However, in 1983, Tea & Coffee Trade Journal noted: Last year, we said there existed a belief that a specialty coffee won less than 1% of the market share, this year the coffee market is for people Connoisseurs accounted for 3%, by 1985 one expert estimated that specialty coffee accounted for 5% of the retail coffee market in the United States.

To reach the premium market through mail-orders, premium specialty coffee roasters, such as Community Coffee in New Orleans, have distributed coffee throughout the United States using a hybrid coffee packaging application. Check valve, the most revolutionary packaging innovation since 1900, allows the release of Carbon dioxide from freshly roasted coffee while also preventing oxygen from entering. The coffee can be stored for up to 6 months. Invented in 1970 by an Italian – Luigi Goglio, the check valve was used in Europe for a decade before the American specialty coffee industry discovered it in 1982.

In the mid-1990s, while gourmet specialty coffee was “exploding” and seemingly in total control, one analyst noted, “the big companies seem to be deifying and trying to interpret something extraordinary.” In 1995, Forbes magazine summed up the fate of big companies in one word “Sleeping.” This message conveys to Maxwell House, Folgers & Nestlé (the three giants in the instant coffee industry) “wake up and smell freshly ground coffee.” Also, during this time, we have witnessed a rise of the “Starbuck bean tree” with the guidance of Howard Shultz (this content will take a lot of words, but it is best to temporarily put it aside for another article). ).

By the middle of the decade, there were signs that the specialty coffee revolution was stabilizing. Although cafes were still springing up, analysts were starting to talk about “saturation.” To counter the SCAA, it has been estimated that, although there were more than 4,000 stores in 1995, the 21st century will welcome more than 10,000.

From less than 100 members in 1985, thousands of people have been added after a decade. The association’s annual conference turns into an enormous marketing opportunity for coffee suppliers from roasters, grinders, and espresso machines to coffee message T-shirts, mugs, books, and everything else related to a distant relationship with coffee. Veterans complain that new converts only see dollars in their eyes instead of coffee beans (probably true, since a coffee shop can cost as much as $250,000).

The end of the cycle of specialty coffee

But of course, the specialty coffee industry is not denatured by itself. Still, the whole market has rushed in to “dissolve” with the advent of a series of coffee magazines such as Coffee Journal, Cups, Café Olé, Coffee Culture. Most disappeared as quickly as a morning cup of coffee with few loyal readers. Then came the evening coffee, also following the “specialty” momentum with McDonald’s coffee; 7-Eleven introduced Café Select, with 18 types of coffee flavors, Dunkin’ Donuts started with whole bean coffee. In 1995.

The battle to sell specialty whole-grain coffee is also a sign of saturation in supermarkets. In the 1980s, grocers were delighted to sell obscure specialty coffees because of their high profits, but then countless other brands were born, and supermarkets had to ask for price cuts through the years. These activities require roasters to spend extra money to get their coffee on the supermarket shelves through subsidies, store fees, promotions, etc.

Finally, a business cycle is almost complete for the coffee industry and preparing for a new process. Just as the traditional coffee industry has gone through phases of growth, fragmentation, and mergers, the specialty coffee movement will be underpinned by its maturity. And in the process, will “Specialty coffee” lose its inherent spirit?

How Does Climate Change Affect The Quality Of Specialty Coffee?