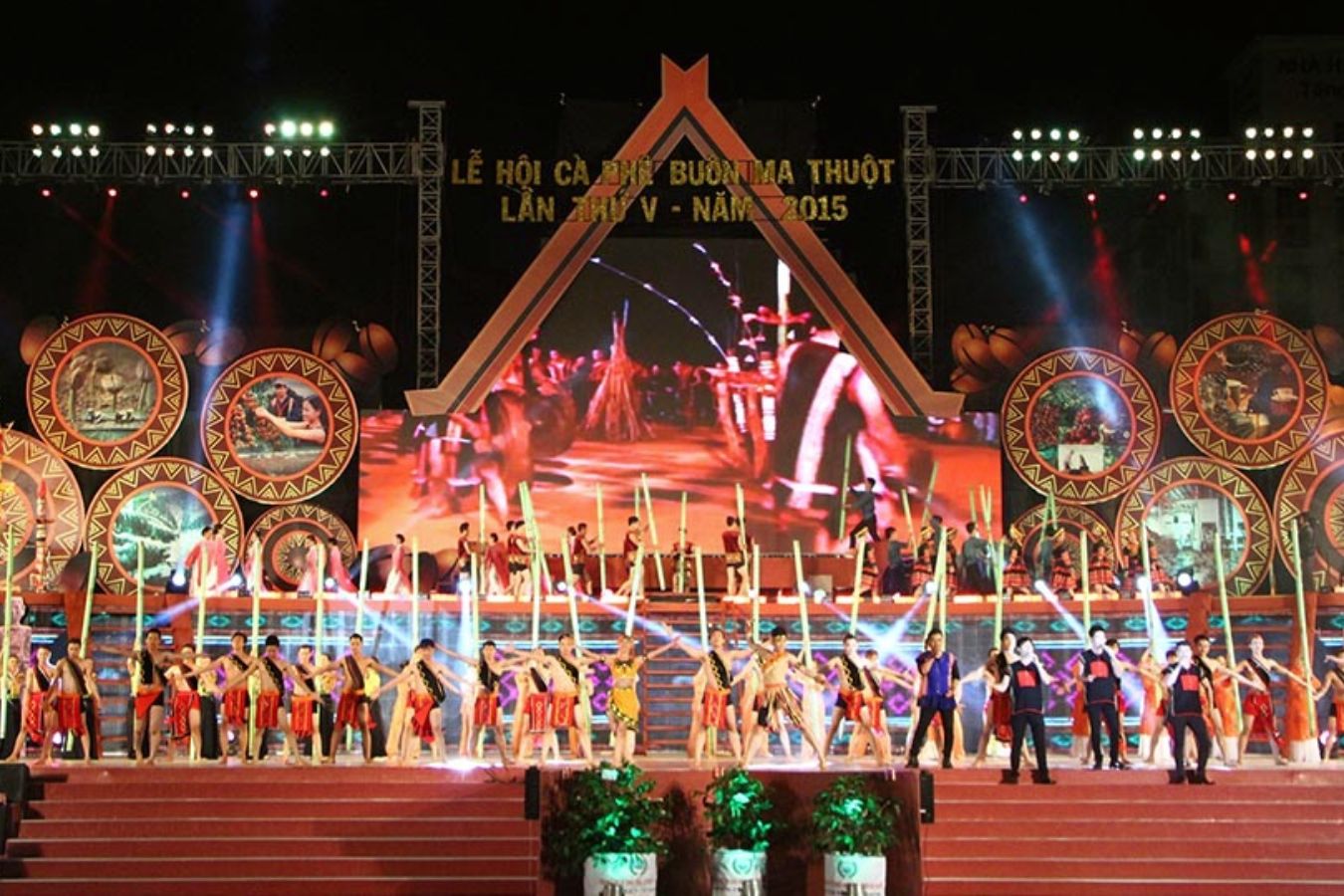 According to the Decision approving the Project to organize the 8th Buon Ma Thuot Coffee Festival in 2023, the festival with the theme “Buon Ma Thuot – The destination of world coffee” will be held in Buon Ma Thuot city. and some localities in the province from March 10 to March 14, 2023.

The opening ceremony with the theme “Buon Ma Thuot – Destination of world coffee” took place at 20:00 on March 10, 2023, and closed at 20:00 on March 14, 2023, using the logo that won the First Prize. Festival logo design contest 2018; the venue is in Buon Ma Thuot City and some localities of Dak Lak province. The festival program uses a modern stage with high-tech lighting, vibrant colors, and designs.

At the festival, there will be exhibitions and seminars, including a Coffee trade fair with the theme “Buon Ma Thuot Coffee – Firmly integrating,”; Specialty Coffee Workshop, a Conference connecting international trade; an Art photo exhibition with the theme “Vietnamese coffee culture and “World coffee history”; The 2nd festival of the tree performance and cultural exchange, sport and tourism of the ethnic groups in Vietnam; Exhibitions and contests of ornamental creatures in Dak Lak;

The Best Festival Coffee In The World

At the meeting, the delegates contributed many ideas to implement the detailed Project of the 8th Buon Ma Thuot Coffee Festival, which focused on cultural promotion activities and raising the value of coffee. Buon Ma Thuot Coffee aims to build a “World Coffee City”; Review and advise on criteria for selecting festival organizers to ensure compliance with current regulations, Sponsoring, and organizing contests…

Speaking at the meeting, the Chairman of the Provincial People’s Committee, Pham Ngoc Nghi, emphasized that the 8th Buon Ma Thuot Coffee Festival in 2023 should be carefully prepared to achieve the goal of modernity, scale, comprehensiveness, and completeness.

Before, they were mainly in promoting communication. Based on comments contributed at the meeting, the Provincial People’s Committee continued to advise the Festival Steering Committee, directing Departments and branches to effectively implement the Project of organizing the 8th Buon Ma Thuot Coffee Festival in 2023.

It is recommended that the Sub-Committees implement the assigned activities and continues to advise on the content arising in the implementation process promptly; Departments and branches continue to coordinate with relevant ministries and branches to organize practical seminars and exhibitions specialized in coffee; renovate urban areas, cities, and rural areas to organize festival activities.

The festival is held to promote the Buon Ma Thuot Coffee brand, develop Vietnamese specialty coffee, and gradually bring Dak Lak to become the destination of world coffee, contributing to raising the value and affirming the position of Vietnamese coffee in the world market.

At the same time, the festival honors coffee growers, coffee processors, and traders; encourages the community to join hands to cultivate the development of coffee culture in Dak Lak province in particular and Vietnam in general.

Thereby introducing the province’s image, potential, and strength; investment promotion in the field of coffee processing and agricultural products in the area, attracting domestic and foreign tourists to Dak Lak.

Currently, Dak Lak province has the country’s most significant coffee area and output, with about 210,000 hectares; the annual harvest is more than 520,000 tons, accounting for more than 30% of the national production.

The province’s coffee has been exported to hundreds of countries and regions worldwide. Through 7 times organized, Buon Ma Thuot Coffee Festival has become a prominent event in Vietnam’s coffee industry.