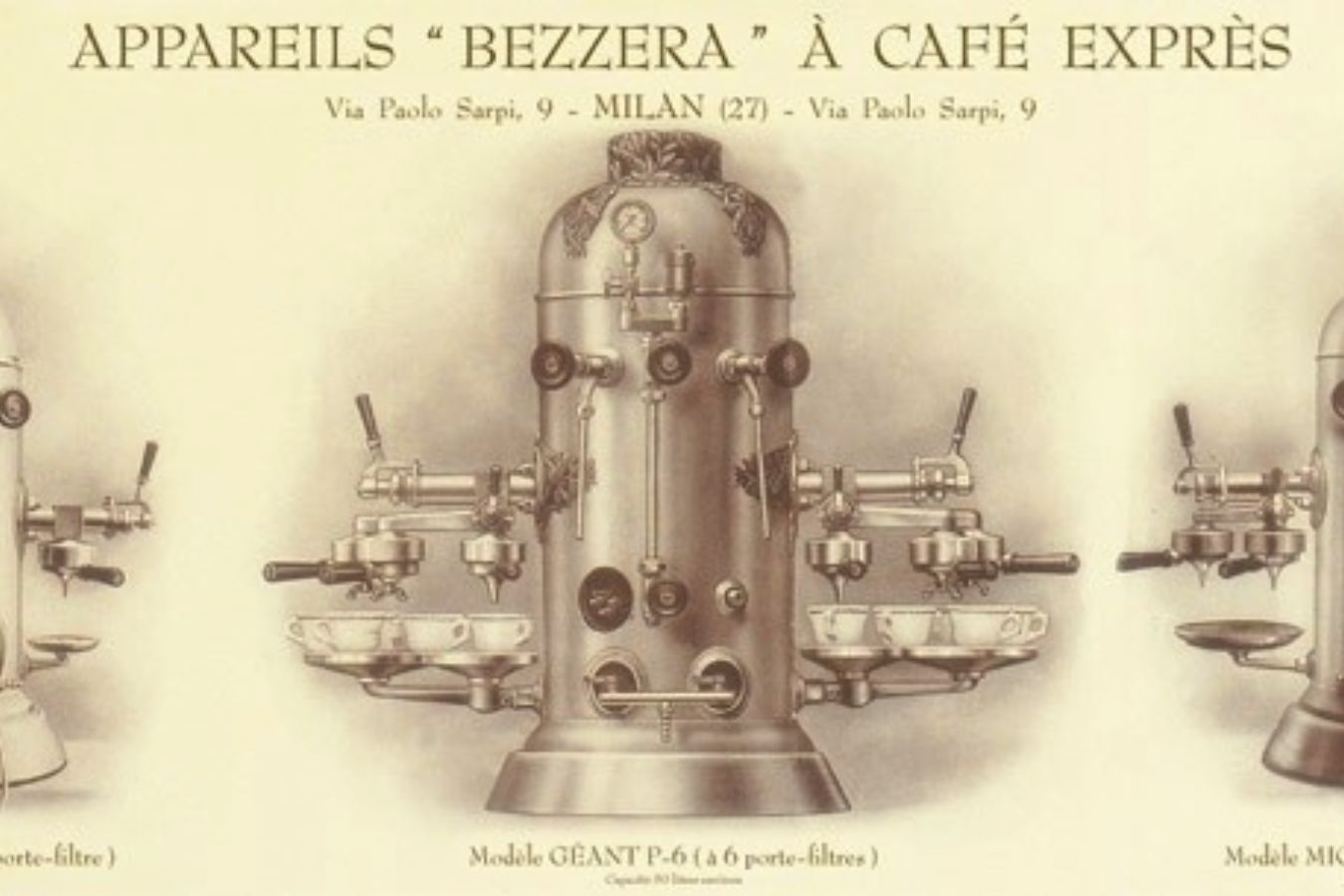 The History Of The Espresso Machine: Ten years ago, it was easy to convince consumers that espresso (and espresso-based beverages) was the only and best way to enjoy coffee. And indeed, Espresso has led a wave of domination that has lasted 50 years, shaping the coffee shops of the Western world and even establishing a culture of its own. But before the espresso machine became an icon of the modern coffee shop (and, to a certain extent, everyday life), all the 19th-century customer needed was just a distraction.

Espresso is not just a coffee or a beverage, but the result of a specific preparation process; In it, there is a combination of four “Ms” in Italian – Macchina, Macinazione, Miscela & Mano – meaning coffee maker, grinder, mixer and barista to produce the desired result (according to INEI ). . That’s why it’s essential to understand how a coffee machine can set itself apart from the rest of the coffee industry & make its history.

Why do we need an Espresso machine?

To better understand how the coffee machine works and what it does, we must ask ourselves why it is needed; Before the advent of the coffee machine, making coffee was not a time-consuming business. Unlike today’s coffee shops, everyone was satisfied with waiting for something, whereas in the 19th century, coffee was expected to be delivered very quickly.

Therefore, the common practice in coffee shops is to brew it in bulk, reheat or hold the coffee over a heat source, and serve it as soon as the customer requests it.

Today, there are many modern devices that meet the needs of storing coffee efficiently. However, in the early 20th century, these were just bitter and tasteless soot-like black coffee.

The only practical solution is a dispenser that can make a single cup within a minute, over and over. And the only way to make coffee fast is to grind the coffee finely, increasing the surface area of ​​the coffee powder in contact with the hot water. And while higher extraction efficiency means less water is needed in each extraction, this poses a more significant problem: filter the coffee residue out of the liquid because the beans are so small.

A filter can solve this problem, but permeation based on gravity alone will not be enough to make water pass through such fine and dense coffee powder. The only solution is pressure. By pressurizing the brewed water, the coffee can be ground much more refined and forms a barrier preventing water from flowing too quickly. However, paper and cloth filters are not considered valid, as they will not be able to withstand very high water pressures.

The increase in demand for coffee outside the home since the late 19th century in Europe has led food service providers to look for more efficient and economical methods to create “Caffè Express”, i.e. “Caffè Express”, ie. Coffee is prepared quickly in front of customers.

Going back to Europe in the late 19th century, this was a time when the whole region was bursting with innovative inventions for steam-powered machinery. However, producing an instant coffee machine by pressure in the 19th century was not easy. Glass and metal materials do not meet today’s modern manufacturing standards. When placed under high pressure, terrifying explosions are inevitable.

The oldest design of an espresso machine is recorded as a patent in 1878 by a German man – Gustav Kessel. However, Kessel’s equipment has never been commercialized – The Curious Baristas Guide To Coffee

It took six years to realise a machine similar to Kessel’s design. This patent belongs to an Italian businessman named Angelo Moriondo. In 1884, he presented the ‘Commercial Steam Machine for Instant Coffee’ at the Turin General exhibition.

The most primitive feature of Angelo Moriondo’s machine was the separate controls for supplying water and steam to the coffee. This allows a (measured) volume of water to enter the chamber before a stream of steam is used to push it out, ending the extraction and leaving a “ puck ” of dry coffee.

By the end of the 20th century, food historians had lost touch with Moriondo, and his machines were long forgotten. Moriondo kept his invention very secret. Sadly, no actual prototype of the Espresso machine invented by Moriondo has survived. In an ambitious project in 2018, the MUMAC museum commissioned a replica made based on his original patent.

The prototype of “ Caffè Express ”

The world would have to wait until 1901 for the first commercial production of the quick-serve coffee machine and another two years to solve all the technical problems of the time. It was the concerted effort of two men, Luigi Bezzera and Desiderio Pavoni. People often liken Steve Wozniak and Steve Jobs of Italian coffee here, who made Espresso a reality.

However, Luigi Bezzera of Milan, 1901 registered a patent for a machine equipped with multiple ” group heads ” for clamping filters (i.e. portafilters ) containing compressed coffee, allowing the waiter to brew a new cup of coffee “expressly” and “quickly” to the customer, by passing hot water from a brass boiler through pressurized coffee.

The only downside is that this appliance is heated directly by fire. Bezzera successfully built his machine, but like many other inventors, he lacked the business skills to commercialize it.

Until 1903, Desiderio Pavoni offered to pay 10,000 Italian lire to Bezzera for the right to commercialize the other patent. Immediately realizing the potential of such a machine, the couple began working on the project together.

However, Pavoni was more than just a marketer; he suggested a few tweaks to the original Bezzera design. The first is the pressure valve, which helps to keep the coffee hot and steam not splashed on the barista when making it. In addition, there is a “steam wand” – the thing that today we see all baristas use to froth milk for Cappuccino. They call the coffee this machine produces “caffé Espresso” because it is brewed quickly before everyone’s eyes. When the machine was completed and presented to the public at the Milan Fair in 1906, it was trade-named “Ideale”.

The Ideale is very fast, but like other steam machines, it can only produce 1.5 bar pressure. The brewing process could take about a minute (quite long, by today’s standards, but very quick at the time). Because of the long extraction time, the coffee will have a burnt smell and leave a bitter taste. Furthermore, due to the poor pressure, the Espresso did not have the crema layer commonly seen today. In the end, Ideale uses only 14 grams of ground coffee per brew.

After the Milan fair, similar espresso machines began to appear throughout Italy, and Bezzera’s first handy machine evolved into the elegant gilded ornaments of the time. However, investing in an Espresso Ideale coffee machine is very expensive, so it is only present in famous cafes in major European cities. In turn, only the “well-off” can enjoy espresso.

The design is simple, but still aesthetically pleasing. these “early” espresso machines were emblematic of the famous  Art Nouveau movement of the era (known as Liberty  in Italy). Espresso machines from this period often feature curves, inspired by plants.

For the next 40 years, Pavoni and Bezzerra ‘s designs remained unchanged. Other companies began to produce similar steam-powered machines, but few took the Espresso away from the Italian border; they weren’t as popular as you might imagine. It took the presence of coffee expert Pier Teresio Arduino to make that happen. Arduino started developing his coffee machine around the same time as Bezzera and Pavoni. Still, his contribution to the marketing of Espresso coffee was more than the development of the device.

The most famous example of this, and also the most famous piece of Espresso-related marketing of all time: Is a 1922 Victoria Arduino Company promotional image depicting a man in a yellow shirt taking an Espresso separation from a moving train. Arduino brought the espresso machine to life, and ideas for his devices can still be found all over Italy today, instantly recognizable by the eagle adorning the top.

In the decades that followed, the espresso machine underwent a “makeover” of structure and principle by many individuals. Including abandoning the dependence on boilers and increasing pressure with a lever before adding many other automatic electrical components,… These improvements are considered revolutions contributing to Espresso coffee, and espresso machines became the global standard we have today.