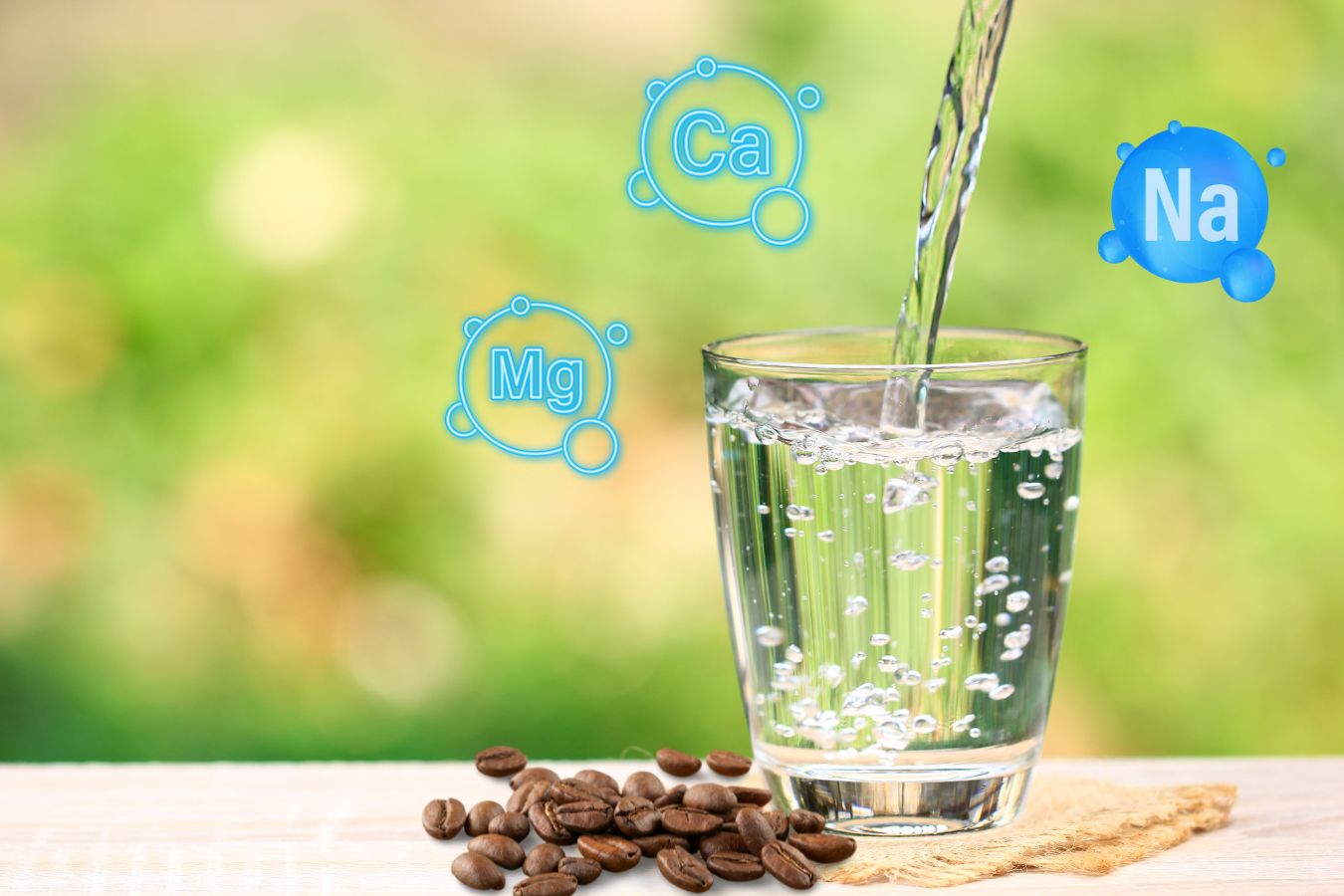 The Science Of Water To Brew Coffee – You can be fully armed with your coffee knowledge.

From being a brewing connoisseur to being a sensory connoisseur or owning the latest and greatest in coffee brewing equipment, have you ever seriously considered the ingredients present in a brew? Ideal coffee cup?

That’s right, we’re talking about the water you use, and whether you choose the tap, filtered or mineral water can make a massive difference to how your coffee is extracted.

A cup of coffee is actually 98% water. Make sure you use high quality water to make your coffee taste better!

What’s in my latte?

Although entirely transparent, there are still many dissolved solids in (most) our water sources. Therefore, even if the water meets the drinking quality requirements, it may not be harmful to your health, but it may still contain some inorganic substances that make your coffee taste bland or even bitter not good.

To begin with a little more in-depth content, such as SCA brewing water quality, or the impact of alkalinity on coffee extraction, we need to seriously (and respect chemistry) review our knowledge of coffee. Learn the basics of water in this post!

Up to substances available from the water supply system, including microorganisms etc. In particular, the minerals (inorganic substances) present in the water will make up the most basic concept that almost all of us have ever read or heard of – that “hard water” or “water hardness”.

To understand what’s going on, we need to know a little about what minerals in the water are made up of. Each mineral dissolved in water is made up of ions, which are electrically charged particles.

Solids with equal amounts of positive and negative charges mix, so the charges cancel each other out. For example, table salt, sodium chloride, comprises equal parts sodium (Na+) and chloride ion (Cl-) that are equally negatively charged.

When minerals dissolve in water, the ions separate (dissociate) and propagate through the water.

In the natural cycle, the groundwater flow will move through the mineral rock layer, through which the water will absorb a part of the ions Magnesium (Mg 2+ ), Calcium (Ca 2+ ), Sodium (Na  ), so we have “hard water”.+

Calcium from limestone is one of water’s most common hard minerals. In addition, you can often find trace amounts of iron, lead, copper, silica and aluminium, sometimes washed out from pipes and tanks.

The term “hardness” originally came from the action of minerals in water with soap. The minerals in hard water bind to soap and form an insoluble scum, which is harder to foam and makes soap less effective at washing. To a certain extent, it has been found that if water is boiled before use, the water will be less hard, making washing easier. The hardness that can be removed by boiling is called “temporary hardness”, the hardness that remains, no matter how much you boil the water, is called “permanent hardness” .

This definition is relatively simple, but to understand what’s going on, we need to know a little about the water’s minerals. Each mineral dissolved in water is made up of ions, which are electrically charged particles.

The charge of these ions causes them to interact with the flavour molecules in the coffee beans. Calcium (Ca 2+ ) and Magnesium (Mg 2+) make up almost all drinking water’s hardness.

Since Calcium and Magnesium both have two positive charges, they work similarly, so they can be considered interchangeable when we talk about hardness.

Some other ions, like iron (Fe3+) or aluminium (Al3+), can technically contribute to hard water, but we usually ignore these because of their permissible content in water. drinking must be very low (WHO, 2011).

With a moderate level of mineral ions like Magnesium (Mg 2+ ) and Calcium (Ca 2+ ), they can get inside the cellulose wall of the coffee bean and return to the dissolved substances that make up the flavour. for a cup of coffee.

At the molecular level, Mg 2+ ions give a slightly more potent extract than Ca 2+ because many flavour compounds in coffee carry oxygen molecules, which magnesium ions effortlessly combine through the oxygen bridge.

Meanwhile, Calcium easily binds with other substances causing lime formation – the main reason why you have to clean your Espresso machine because of calcification periodically.

Total hardness, also known as ” general hardness “ or GH for short, is just a measurement of the amount of positively charged Calcium and Magnesium present in water.

Because the charge in these ions helps to extract flavour molecules, the GH measurement is an indicator of the extractability of the water.

It should be known that each positively charged mineral ion will pair with negatively charged ions. Bicarbonate (HCO3 – ) is the most important in water.

When you boil water with bicarbonate, it reacts with any Calcium and Magnesium ions in the water to form a precipitate – a solid called limescale (CaCO3 and MgCO3).

In the example above, you can see that alkalinity equates to temporary hardness because there is enough Calcium and Magnesium to react with bicarbonate and form limescale.

However, in some cases, the bicarbonate content can be more than the amount of Calcium or Magnesium. This can happen when the water has softened. In this case, there may not be enough Calcium and Magnesium to react with all the bicarbonate.

Unlike Ca 2+ and Mg 2+ Na + ions, which are weakly bound to most of the neutral compounds in coffee beans, water rich in Na+ cations is not beneficial for extraction. So if the aim is to extract most of the flavor components in coffee, then Mg 2+ rich water is the best fit. If the aim is to achieve the best flavor balance for a given light roast, both Ca 2+ and Mg 2+ show greater efficiency (but higher residue formation). ).

When measuring hardness in water, we usually take two measurements: GH and KH. GH, as mentioned, is general hardness and measures the total amount of calcium and magnesium in water.

What is confusing, however, is that a typical KH measurement does not measure temporary hardness.

The KH measurement indicates only the amount of bicarbonate in the water, also known as alkalinity. This parameter is also essential because alkalinity will remove the acidity in the coffee and make it taste less acidic.

Too much alkalinity will make the coffee taste “flat”.

And yet, when considering the buffering capacity of water, we need to pay more attention to the brew ratio (i.e. the ratio between the amount of coffee/extract obtained).

A cup of Ristretto usually has a ratio of coffee: extract = 3:2; Meanwhile, with filter coffees, this ratio goes up to 1:15.

This is an issue to consider because, with the same type of coffee and water, you will feel sourer from the Espresso than a cup of filter coffee neutralized by ten times more alkali.

There are three metrics that really matter in brewing coffee: Total or general hardness (GH), transient hardness (or carbonate hardness), and alkalinity (KH). The total hardness helps the water extract the flavor from the coffee. Temporary hardness is a determining factor in the possibility of limescale formation; Ultimately, alkalinity determines the coffee’s ability to neutralize acidity.

If KH is lower than GH, then the KH measurement will represent both temporary hardness and alkalinity since KH is what determines how much of the GH can participate in limescale formation.

However, suppose KH is higher than GH. KH only represents alkalinity in that case, and the temporary hardness is now equal to total hardness since the ‘residual’ KH cannot form limescale independently.

What about the pH of the water?

Simply put, water is neutral, meaning it has a pH = of 7. However, because of the different molecules dissolved in water, it can also be acidic or mildly acidic.

Therefore, ordinary drinking water can have a pH between ≥ 6.5 and ≤ 8.5 (WHO). You can check out the SCA brew water standards post for more details.

On the other hand, if you come across terms like Alkalinity or “buffer” when talking about coffee water, it will almost certainly refer to carbonate [after combining with a Hydrogen atom, it is called bicarbonate (HCO3 – ); The two hydrogen atoms are carbonic acid (H₂CO₃)].

You should not confuse it with alkaline or a basic solution – it depends on the pH scale. Review the effect of alkalinity on coffee extraction if you are unsure here!

The carbonate helps keep the acid level in the water stable – it locks up in its molecular state (H 2 CO 3 ) when it is too much, and it releases (in the form of HCO3 –) when water lacks H+ ions.

This is why carbonate is called a “buffer,” as it helps counteract changes in the acidity of the water.

To summarize what Alkalinity means for coffee, it’s straightforward:

The next time you combine the perfect extraction technique with water of the right quality, we can guarantee you’ll get the best taste of your coffee!

However, it’s important to remember that each coffee bean needs to be roasted for optimal flavour when extracted; water is a crucial solvent – ​​but not the place to exercise controls.

We acknowledge this point and emphasize that we should spend more time on coffee-making than “making the water”.

In the next section, based on the experimental analysis results, we will introduce you to several methods of adjusting the brew water composition setting. After all, we hope to have provided some helpful and reliable scientific advice regarding water for your coffee; it’s worth some more digging!