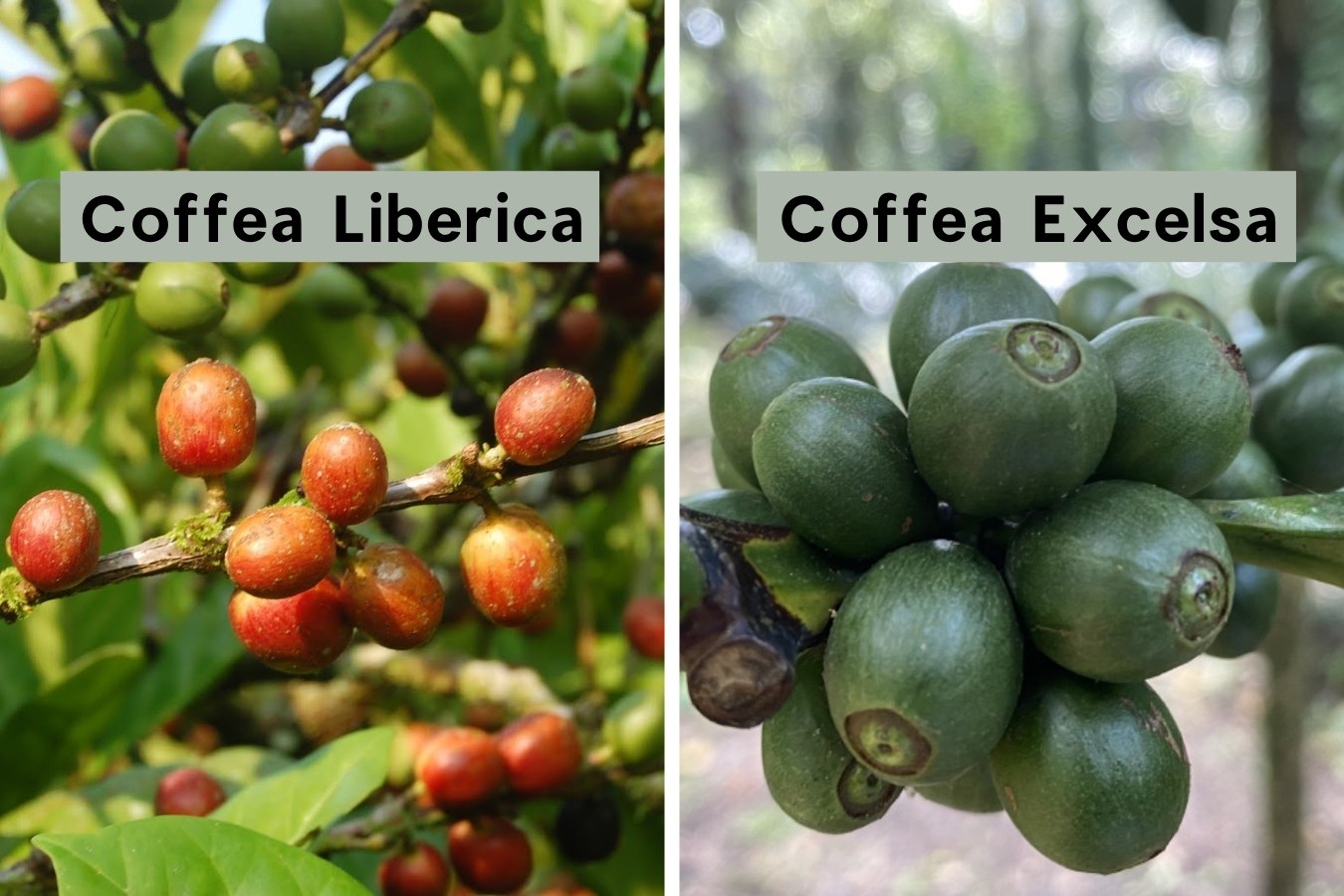 Top 5 Differences Between Excelsa coffee and Liberica coffee: Liberica and Excelsa are allogenic species that grow mainly in low, hot climate areas. Quality is poor, and markets are limited. These coffees are of local importance in a few countries and do not have major commercial significance in the international coffee market. Both are present in the older Lao plantations but have little future in the era of high-quality coffee. Many people often mistake them for the same species. Therefore, today’s article will help you identify the differences between them in the most detail.

1. Origins of Excelsa and Liberica

The Origins of C. Excelsa

Excelsa, also known as Coffea Dewevrei or Dewevreié, was initially identified in Central Africa in 1903.

Excelsa was supposed to be a separate species of the genus Coffea until around 15 years ago. It wasn’t until 2006 that it was reclassified as the dewevrei genus of the Liberica species.

Most of Excelsa’s recent adventure in the current coffee industry is based on the consequent misunderstanding. This is partly influenced by the fact that Liberica varietals are frequently sold under the label “excelsa coffee” (in the same way that the word “robusta” is widely used to describe all C. canephora varieties).

As a result of the misconception, these phrases are used more broadly and interchangeably, resulting in less accurate statistics on precise production levels. It may also result in a reduction in the quality of excelsa coffee. Overall, this provides little motivation for farmers to employ quality control procedures.

The Origins of C. Liberica

Liberica is a West African species endemic to Liberia. It is now farmed and consumed mainly in Southeast Asia, including the Philippines, Indonesia, and Malaysia. Liberica coffee accounts for more than 70% of all coffee farming in the Philippines.

Liberica may have moved to Ethiopia from Liberia, and from there, it may have traveled to the Middle East and Southeast Asia. Muslims frequently visited Malaysia during the time for religious reasons.

2. Growth Region of Excelsa and Liberica

Grown in Southeast Asia (including Vietnam, Indonesia, and the Philippines) and India.

Although the exact route Liberica took to Southeast Asia is unknown, research shows that it grew in popularity dramatically in the late 1800s.

A coffee leaf rust outbreak went through more than 90% of all arabica plants globally around 1890. As a result, several producers have made disease and pest resistance a primary goal.

While many producers were turning to robusta at the time, farmers in the Philippines were urged to plant liberica. This is because liberica is far more resistant to coffee leaf rust and can be grown at greater temperatures and lower altitudes than arabica. Furthermore, because liberica cherries’ rinds are substantially tougher, bugs have a more challenging time penetrating them.

The species expanded quickly because of the Philippines’ closeness and ease of travel to other Southeast Asian nations. Malaysia and Indonesia are only a short boat trip away from the Philippines. Large ships are not required to transport coffee and spices from one country to another.

3. Growth Characteristics of Excelsa and Liberica

Despite its reclassification as a dewevrei genus of liberica in 2006, experts dispute whether excelsa should be considered a separate species.

Excelsa coffee thrives at altitudes of 1,000 to 1,300 meters above sea level, and unlike arabica and robusta, it is a tree-like plant rather than a shrub. This implies it needs vertical space rather than expanding into the ground around it. Excelsa Coffee is tough to handle and takes tremendous care, despite its exceptional productivity and resilience.

The excelsa tree’s leaves are enormous and hairy (average 26cm long x 13cm broad). Even though the fruit takes roughly a year to ripen, the blossoms bloom numerous times throughout the harvest season. The flowers on arabica and canephora plants are less critical. Asymmetrical peas, averaging 9mm long and 6mm broad, are also produced by Excelsa.

In addition, the excelsa bean has less caffeine than both canephora and arabica. Caffeine levels in excelsa beans range from 0.86 to 1.13 grams per 100 grams, compared to 1.2 to 1.5 grams in arabica and 2.2 to 2.7 grams in canephora.

On the other hand, the dominating tree is resistant to many diseases and pests that other trees are not. Coffee leaf rust, coffee leaf borers, and nematodes are examples. Excelsa, on the other hand, is prone to trichomycosis, a fungal disease.

Because of the giant leaves, the dominant tree may grow more than 15 meters tall, with a top diameter of 6 to 7 meters. Farmers must trim the tree regularly because of its enormous output, which is challenging to manage. This necessitates additional manpower, which raises production costs. This is only one of the numerous reasons higher-quality coffee hasn’t spread wider among farmers.

This species’ protracted ripening period increases production costs and makes it difficult for farmers to apply any agricultural strategy.

In the end, there isn’t much of a market for this species. Even in societies that thrive at growth, information is frequently passed down from generation to generation. Furthermore, farmers often save beans for personal use because there is no necessity.

Finally, even if there is interest in expanding Excelsa Coffee production, there is no established commodities market or defined prices, making regular trade impossible. Any huge volume is nearly impossible to achieve.

Liberica may be found in the wild throughout tropical Africa. This is a tough coffee plant. Liberica has a spontaneous mutation that produces yellow ripe cherries and another that generates ripe pink cherries.”

Five years after planting, Liberica trees begin to yield fruit. They grow tall, with some reaching heights of up to 17 meters, making cherry harvesting challenges.

The leaves and cherries of arabica and robusta trees are likewise substantially more significant. Liberica leaves may grow up to 30 cm broad, and when mature, Liberica cherries can be nearly twice as large as the other two types.

4. Taste of Excelsa and Liberica

Excelsa may provide a complex and intriguing cup profile when grown and treated with care despite issues with the production process.

The excelsa bean is denser and contains less dissolved solids than arabica. Existing roast profiles for excelsa must no longer be drawn from other beans and must be based on new curves and best practices.

Furthermore, because dominating beans have less solubility, they may need to be roasted at a higher temperature or for a more extended period to get an ideal flavor.

According to roasters who operate with excellent quality, light and medium roasts can provide fruity and berry notes and aromas like wood and popcorn. The peas will have a more significant body with chocolate and cream flavors the deeper the roast.

Liberica has a meat-to-skin ratio of around 60:40, compared to 40:60 for Arabica and Robusta. This influences the flavor of liberica cherries by lengthening the drying period. Liberica has a fruity flavor since it has a lot of pulp and ferments when dried organically.

Some of these types have a jackfruit flavor to them. Jackfruit is particularly popular in Southeast Asia. Almost all of the tastes we receive in Liberica are described as mimicking jackfruit – citrus or citrus fruits.

Other significant liberica flavor features include lasting palatability and consistent sweetness (liberica is generally characterized as sweeter than arabica). This might be because liberica seeds are porous, allowing the beans to absorb more sugar from the mucilage.

In addition, other notable flavor characteristics of liberica include lingering palatability and a consistent sweetness – liberica is often described as sweeter than arabica. This may be because liberica seeds are more porous, which means the beans will absorb more sugar from the mucilage.

5. Growth potential of Excelsa and Liberica in the market

Despite its modest position in the global coffee industry, excelsa’s lower optimal elevation might be an indirect answer for growers threatened by climate change.

Culturing excelsa might prevent them from continually traveling to higher elevations to obtain the desired growth temperature. However, a total shift is unlikely, an impractical idea in the absence of a commodities market, and present demand is minimal.

The dominant tree might serve as a rootstock for arabica and robusta trees in a more realistic scenario. This is since its roots develop quicker and are more resistant to illnesses and pests than those found in certain coffee-producing regions.

Rarer and more whole beans are highly valued in the specialty coffee industry. However, growing it on a wide scale might be difficult due to harvesting difficulties. This coffee’s absence of a C price is also a problem.

The art and science of excelsa cultivation are still in their early stages. Continued testing and buyer feedback, on the other hand, can help it establish itself as another excellent alternative for shoppers.

The lack of awareness is the major obstacle to great coffee. This is partially owing to ambiguity about whether it is a species, which might lead to incorrect reporting.

With additional study, data, and manufacturing, there may be a more significant demand for this peculiar bean in the future. However, this does not appear to be the case right now. With places ideal for coffee farming already being affected by climate change, exploring more hardy and resilient types becomes increasingly vital. Ever. Even though excelsa’s genetic composition makes it unsuitable for broad cultivation, it may provide a “hidden” answer.

Liberica’s image is starting to transform and improve across the world. Many conferences centered on Liberica coffee’s specialty last year, including a Liberica roasting competition.

However, creating a specialty or high-quality liberica like arabica may be correct. Only by allowing specialty coffee drinkers to sample specialized liberica will the negative perceptions of it be dispelled. Liberica has several advantages for producers. It grows well amid other crops and is disease and insect-resistant, allowing farmers to diversify their goods for extra stability.

Liberica can even be grown among other fruit trees. Bananas, papayas, and pineapples are excellent companion plants for coffee since they grow well together. Peanuts are also beneficial to the soil because they fix nitrogen.

These are cost-effective options for farmers who can only harvest coffee once a year; [Liberia allows them to] cultivate crops in the meantime.

Furthermore, most of the terrain ideal for cultivating arabica (which requires specific temperatures) is becoming unsuitable due to climate change. Producers in these locations may have little choice but to invest in a more resilient crop. Liberica has even been demonstrated to be hardier than robusta in some areas, with a deeper root system that can thrive in various soils.

Liberica coffee is more likely to fetch higher prices than robusta coffee. Liberica, on the other hand, is not as productive as coffee, so it’s a compromise. “You have fewer plants to care for and sell, but [farmers] get the same amount.”

Variety in the kinds and crops we farm is critical if we want to bring the sector together. It’s another step in the right direction for coffee growers and the whole supply chain.

Liberica’s distinctive cup structure, high resilience, and platform appeal to manufacturers and consumers. That might be a unique opportunity in an age of many challenges and worries. Is it, however, regarded as a solution?