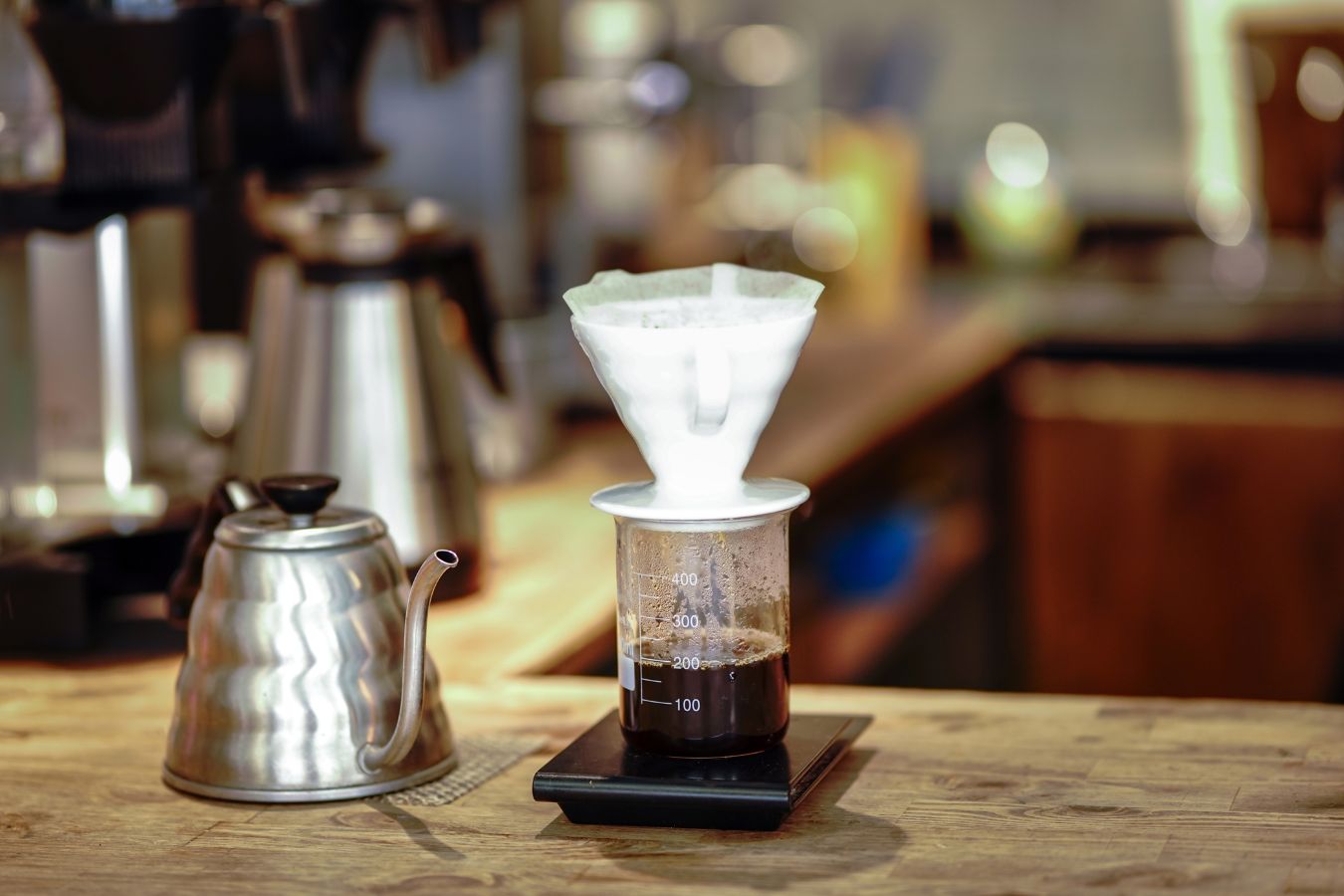 V60 was born with a streamlined design philosophy and high practicality to bring the best experience in Pour Over technique. Run a long time ago, but with sophisticated improvements since 2004, each feature on the physical structure of the V60 adheres to a mathematical ratio to solve the problem of coffee taste. Today, V60 Pour Over has been popular in 70 countries worldwide, pioneering the art of making coffee in a sophisticated and sophisticated way.

Hario and the birth of the V60

Hario is a glass manufacturing company based in Japan. The company has been operating since 1921 in Kanda – Tokyo. During this time, the company mainly focused on producing heat-resistant glassware for scientific laboratories in the region. After nearly 30 years, the company began to expand its product lines, including kitchenware, introducing the first Siphon flasks. After a few years, designer Tsuruoka at Hario came up with a conical drip coffee maker prototype. This innovative product is an alternative to the overly complicated coffee-making of the late 1950s

Hario produced the first glass conical coffee filters, which were then marketed in 1980; years later, the prototype was not called the V60 until The company decided to review and revise its design in 2004. The first true V60 was born. The name V60 stands for Vector with an angle of 60 degrees (A familiar term in the design and math industry).

Vector images are created from the core elements of geometry such as pixels, lines, curves, etc. These shapes are computer coded by a mathematical function; for V60, this function is y= x 2 . put, if we plot the part of the upper layer using 9th-grade knowledge, we will have a funnel-shaped parabola, which is the shape of V60, a very “standard” and very “normal” design. It exists in many aspects of life, so it is no wonder that Hario calls this design of nature – “Design natural.”

The spirals of the V60

Also, in 2004, Hario had the addition of spiral ledges on the inside of the coffee hopper. This slight improvement fixed the central problem of the previous funnels. When the filter paper is wet, it will stick to the filter wall due to the swelling pressure of the coffee and hinder the Water flow down. However, the new design of the V60 with spiral lines created a gap between the filter paper and the wall of the funnel, allowing the coffee to expand to the maximum (CO 2 quickly escapes through the grooves), and the extracted water flow is still maintained. Go down easily.

At the same time, the new design of the V60 comes giant hole in the center (compared to the small hole of the Beehouse or Kalita). Water efficiently circulates through the coffee, a more efficient extraction process that releases more of the coffee’s flavors and nuances.

Why is V60 popular in Pour over?

The V60 has an excellent design, but the question is, what “important” contribution does the V60 make to the coffee experience as its design philosophy?

The design of the V60 has a large pile hole and spiral grooves, as shown. When Pour Over with V60, the Barista can adjust the coffee flavor by changing the speed of the water flow. If pouring (pouring) a small, slow, even, and prolonged water flow, it will help the body “thick” ( Heavy body ), the flavor is more precise, but it may lead to bitterness if poured for too long. On the contrary, dashing will help the body “thinner” ( light body ), and the taste will be “cleaner.” In addition, the filter paper of the V60 is relatively inexpensive, easy to find, and does not smell when mixed (Source:  baristaweapons.blogspot.com )

And there are many other reasons, depending on personal preferences that each person will choose their way to enjoy, but absolutely should not compare the quality of coffee prepared from V60 with other methods such as French press. Moka pot or Cafe Siphon. Very lame and baseless.

Pour over technique with V60.

Although the brewing technique with V60 is not as complicated as a shot in Espresso, fully exploiting the taste quality of coffee also requires specific techniques, and V60 is not easy to “do” because it is challenging. Quickly turned off at the bottom, leading to over (off) if pouring (pouring) carelessly.

Reference parameters for Pour over technique with V60:

Don’t forget to share better techniques and mixing rates with Prime with V60!

V60 in the world coffee industry

V60 launched 12 years ago, then it is available in more than 70 countries worldwide and has brought Hario many awards. The prototype of the conical filter funnel was made of glass, ceramic, then plastic material, and finally metal. The latest V60 versions are made from copper metal for high thermal conductivity better heat retention for more efficient extraction.

At Hario, coffee makers sold outside of Japan account for about half of the company’s sales. The company has had a significant impact on the global coffee industry. Given the trend of the third wave of coffee, the brewing experience with the V60 is not expected to slow down. The V60 will constantly change in design to suit the changes of this trend.