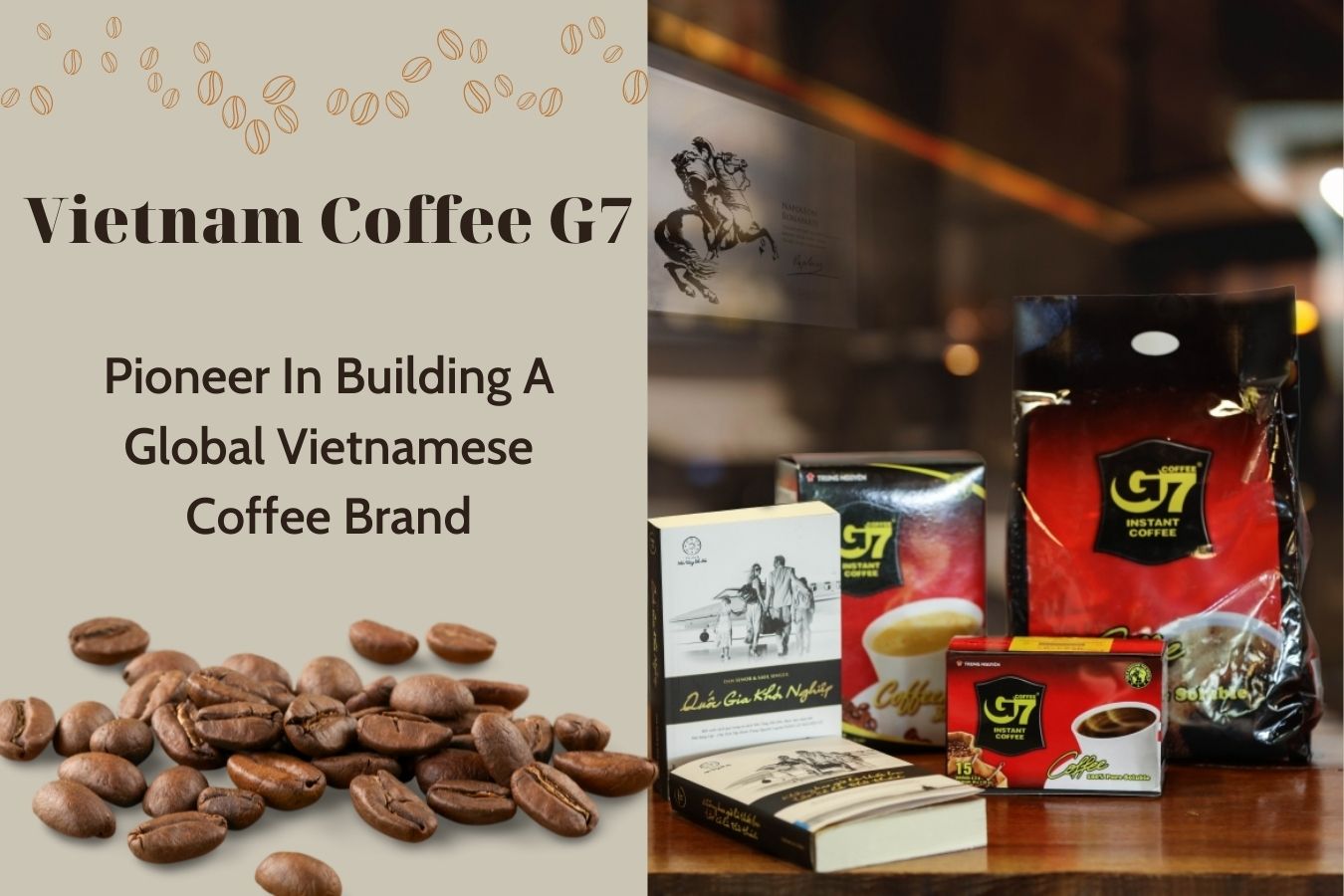 Vietnam Coffee G7 – Pioneer In Building A Global Vietnamese Coffee Brand: G7 authentic coffee is one of the pioneering brands to introduce the concept of “Vietnamese brand”, contributing to realizing the aspiration to elevate the position of Vietnam’s coffee industry on the world map.

In the early years of the 21st century, when Vietnam was still a purely agricultural country moving towards an industrialized – modernized economy, the brand was almost a concept that “did not exist” in the community. enterprise. On the other hand, at this time, international brands are dominant in the domestic market, making weak Vietnamese brands not dare to seek opportunities to gain a rightful position in the home market.

On November 23, 2003, G7 instant coffee officially appeared in the Ultimate Festival at the Reunification Palace. Before that, no Vietnamese enterprise had dared to directly confront a multinational corporation when its products were leading the Vietnamese market. G7 is the first and only Vietnamese coffee brand that dares to directly “challenge” foreign brands. In the blind test of coffee flavor, up to 89% of consumers chose G7 – a proud victory, setting the stage for Vietnamese brand coffee to regain and dominate the domestic market, continuing to world conquest.

The success of G7 is not only based on product quality but also from a distinctive and distinctive positioning strategy. The desire to develop the brand reaches the global brand level, but G7 coffee keeps the Vietnamese cultural identity, affirming “real coffee” and following the goal of “serving the community”. Because of the creativity and special charm of G7, foreign brands give up the pride of the giant, are forced to change to suit Vietnamese tastes and apply the strategy of “localization” to compete.

G7 coffee product is the quintessential combination of the most delicious coffee beans with modern technology and mysterious oriental recipes that enhance alertness, activate creative brain and increase efficiency. working capacity. In each box of G7 coffee, there are burning letters of desire for a powerful Vietnam, as a summons for each consumer to join hands to change the nation’s mood in the new context. Through coffee to spread the message of aspiration for a great common future for the nation, to establish the worthy name of the nation and the Vietnamese country on the world map.

With the Trung Nguyen brand, G7 became a pioneering flag, inspiring Vietnamese brands to confidently compete with international products. At the same time, every determined step of the G7 has instilled in each Vietnamese person an aura of a nation that dares to aspire, to be creative, to dare to challenge. G7 coffee brand received a wide response from all walks of life, young patriots, cultural researchers, elites, economists, media… Viet reaches out to the world with the principle that when together nothing is impossible. That is also the strength for G7 coffee to rise to lead the domestic instant coffee market and quickly export to 80 countries and territories.

Since its inception and development, G7 has gradually conquered the domestic market and reached out to the world, becoming a favorite coffee brand.

The success story of G7 has been included in the ASEAN Brand book and taught in prestigious universities in Vietnam and the world, in famous magazines such as Financial Times… G7 became the first Vietnamese brand, represents the symbol of the young, young “little David”, but does the unthinkable, defeats the giant Goliath, becomes a “case study” of experts when researching strategy Creative communication of Vietnamese brands.

Up to now, G7 has always been a symbolic gift of Vietnam present in the luggage of Vietnamese people when going out to the world as well as of international guests when leaving Vietnam. G7 products are always loved by consumers around the world with a wide presence covering supermarkets, commercial centers, convenience store chains, and e-commerce channels in the US and China. , Korea, Japan. In particular, G7 leads the top 13 most popular instant coffee brands in China according to the announcement from Chnbrand – China’s leading brand ranking agency, surpassing Japanese, American coffee brands, Malaysia, Taiwan.

Vietnam Coffee G7 : Vietnamese brand represents the spirit of commitment of the young generation for the country and nation

Musician Duong Thu commented: “G7 is not an ordinary warrior but a warrior who creates a brand. Bringing Vietnamese-made products to conquer the world, raise the value chain of the coffee industry, and change the mood of the Vietnamese brand.https://helenacoffee.vn/

If it was just the aspiration of a brand, G7 coffee would not have receiv.ed that much companionship from Vietnamese people and did not have the miraculous development power like “Thanh Giong”. Consumers will gather around brands that embody the ideals they aspire to. It is because of the great vision for the country and the nation that G7 coffee can become a national brand symbol, contributing to the process of raising the country’s position globally.

Founder and Chairman of Trung Nguyen Legend Group Dang Le Nguyen Vu has a strong desire and conviction that Vietnam can become great. The point here is to understand the fundamental factors and a specific action plan to gradually develop Vietnam into a powerful nation. Along with the determination to regain the real value that Vietnamese coffee deserves, Trung Nguyen Legend Group will also contribute to creating a model country, leading and building an ecosystem to help people move forward. holistic wealth physically, materially, spiritually.

G7 instant coffee has made its mark in more than 80 countries and territories, known as the “diplomatic ambassador” connecting Vietnamese culture with the world when it is always chosen to serve in economic events. , Vietnam’s important diplomacy and global summits such as APEC, ASEM, ASEAN, WEF… And continuously leading in the rankings of the most popular brands according to research results of AC Nielsen, Kantar Worldpanel, B&C Company and Nikkei BP Consultancy…

Moreover, G7 coffee always accompanies initiating activities to cultivate knowledge and a spirit of commitment and great aspiration for many generations of entrepreneurs and young people. In particular, typical programs such as the program “Creativity for Vietnamese brand” in 2003, “Building a brand of Vietnamese agricultural products” in 2003, the establishment of the Fund “Initiating creativity” to support young start-ups in 2005, launched the forum “Our country is small or not small” and “Action Day for Great Vietnam” in 2005 and many other programs accompanying the Central Youth Union to support youth start-ups and national construction… important in the development of the country in the doi moi period.

The first book of the Life-changing Foundation Bookcase “Think and Grow Rich” during the Creative Festival for Vietnamese Aspiration at the Reunification Palace on the 9th anniversary of the G7’s launch (November 23, 2012).

On November 23, 2012, the 9th anniversary of the launch of G7 Coffee, Trung Nguyen officially accompanied the Central Youth Union to commit to “Building a young generation of creativity for Vietnamese aspirations” with a campaign to donate tens of millions of foundation books. change life – provide knowledge and formula for success to young people. Up to now, the program has been followed and developed by Trung Nguyen Legend Group with the name “Journey From the Heart – Journey of Great Will – Start-up to build a nation for 30 million young Vietnamese”, promoted to spread. Widely distributed with tens of millions of precious books in the Life-changing Foundation Bookcase, presented to young people, students, students, young people from universities, colleges, soldiers, soldiers, letters. Central and local institutes, cultural houses… in all regions of the country, supported and accompanied by thousands of individuals and organizations at home and abroad.

As an outstanding achievement in the 25-year journey of creation and development of Trung Nguyen Legend Group (June 16, 1996 – June 16, 2021), G7 instant coffee brand has also contributed to creating a special mark. , a new position of the Vietnamese brand in the world in the innovation and development journey of the country. G7’s spirit of dare to challenge, great ambition and constant creativity is still continuing to lead G7 to conquer the world with different imprints, especially in products and the story of a new way of life – Coffee Lifestyle Coffee brings true wealth and happiness.