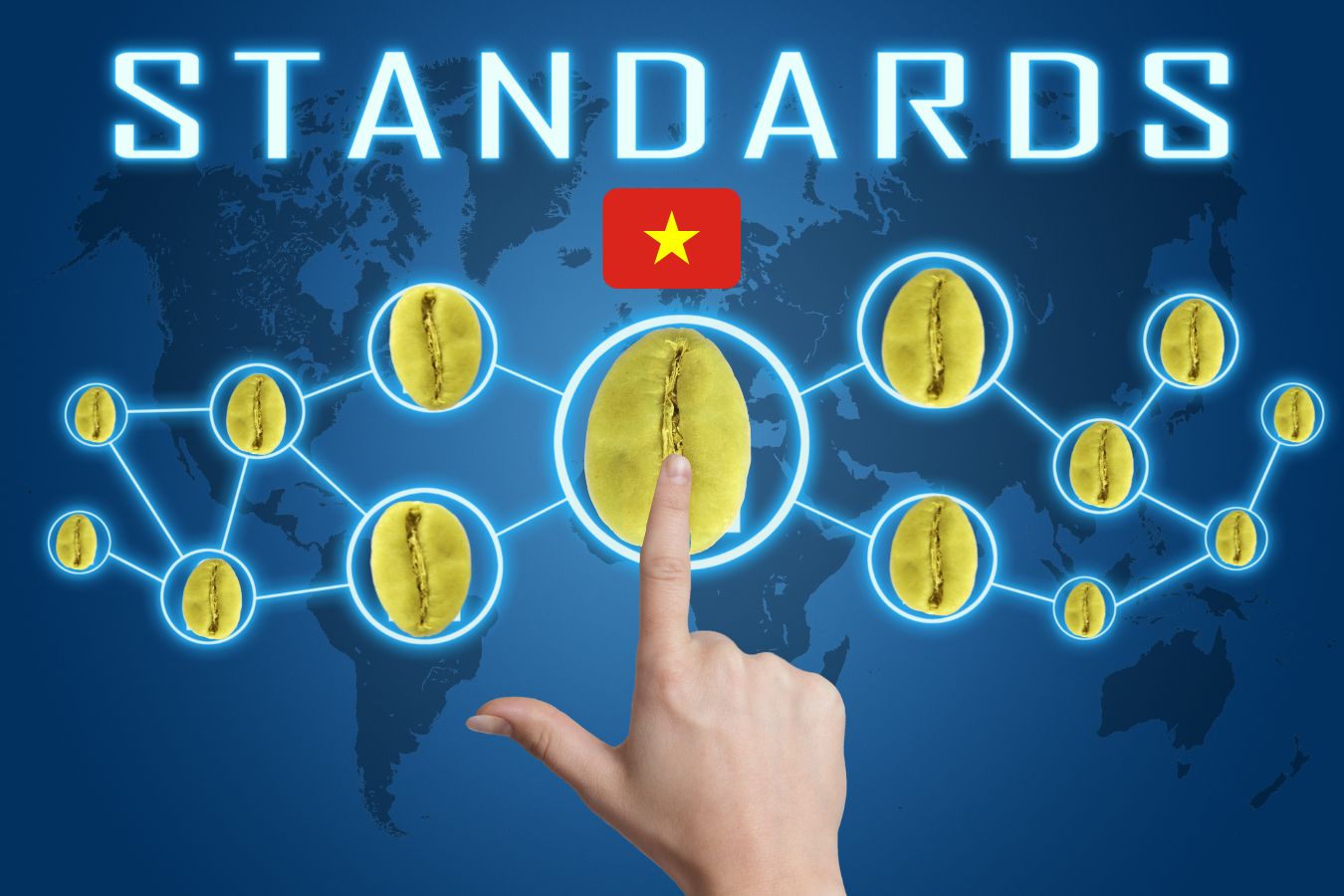 Vietnamese Coffee Beans Standards in for Export: TCVN 4193:2014 compiled by the Department of Agro-Forestry-Fisheries Processing and Salt Industry and Coffee and Import-Export Inspection Joint Stock Company, proposed by the Ministry of Agriculture and Rural Development, General Department of Standards and Metrology Appraisal quality, announced by the Ministry of Science and Technology.

The following documents are essential for the application of the standard.

All defects related to the coffee bean are specified in Annex A.

All defects not related to the coffee bean are specified in Annex A.

4.1. The quality classification of green coffee is specified in Table 1.

4.2. Color:  Characteristic color of each type of green coffee.

4.3. Odor:  Characteristic smell of each type of green coffee, no strange smell.

4.5. Percentages of mixed types of coffee allowed in each class of coffee are specified in Table 2.

4.6. The maximum allowable percentage of defective mass (error multiplication, impurities) for each grade of coffee is specified in Tables 3 and 4.

4.7. The maximum allowable mass ratio for some defects is specified in Table 5.

5.4. Determine the ratio of mixed coffee of different types

From the sample M about 300g is taken under 5.1; separate the coffee beans, robusta coffee, and coffee jackfruit, and weigh each obtained mass m I, in grams (g), where i  is the symbol for each type respectively.

Calculate the percentage of mixed coffee, I, by mass percent, according to formula (1):

For each indicator, conducted on two parallel samples. The difference between two similar test results shall not be more than 0,5 %. Take the final result as the average of the two results above.

From a test portion N of approximately 300 g taken according to 5.1, separate kernels of error and impurities and weigh each. Separate the black, brown, and young seed from the error kernel and consider each type. The masses obtained are n j, in grams (g), where j  is the corresponding symbol for each class.

Calculate the ratio of each respective type,  b j, by mass percent, according to formula (2):

Where: N mass of test piece

For each indicator, conducted on two parallel samples. The difference between two similar test results shall not be more than 0,5 %. Take the final result as the average of the two results above.

6.1. Packaging and labeling of green coffee,  according to TCVN 1279: 1993 Green coffee – Packaging, labeling, storage, and transportation.

Table B.1 – Sieve size and the sieve hole size

The leading cause of disability