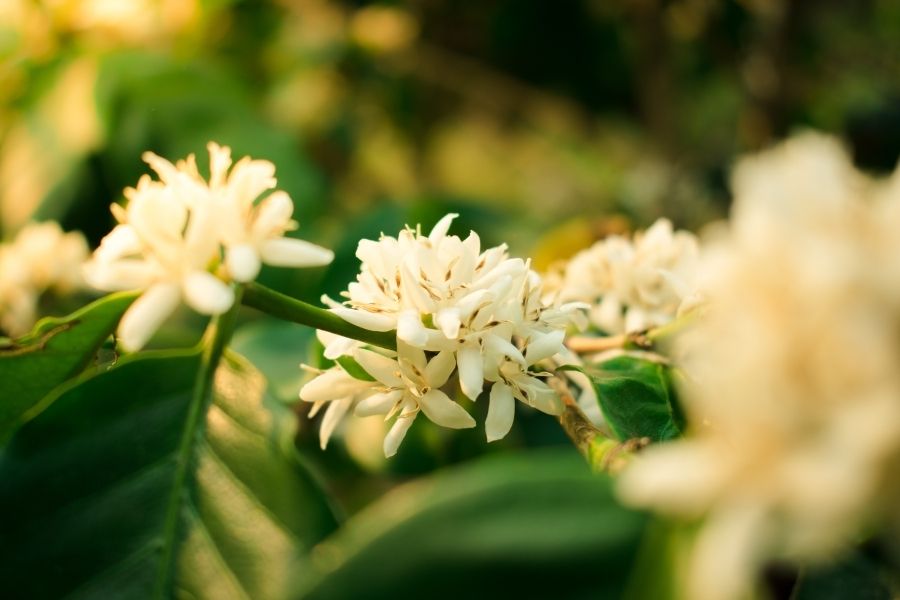 What Does The Coffee Flower Season Mean To Producers? When it comes to coffee, we frequently discuss the bean and where it is grown, but we overlook an essential factor that influences the plant’s productivity. It’s all about the flowers.

As I indicated in this essay, there are two key reasons for coffee growers: irrigation and harvest. Because of its delicious perfume and snow-white beauty, the coffee blossom season has been increasingly popular in recent years. However, we mainly emphasize flowers because of their beauty, overlooking the fact that this is a critical moment for determining the production of the future harvest. Based on the proportion of flowering, farmers can forecast whether that year would produce a high or low yield.

If you’re interested in learning more about coffee, take a few minutes to read this article to learn why coffee flowers are so significant. In this post, I’ll go through the irrigation season in greater detail, as well as coffee blossoms, which are a critical role in determining the quantity and quality of coffee beans.

1. What time of year do coffee flowers bloom quality?/ Breeding

After three to four years from the day of incubation, when new coffee trees are planted, the first blossom appears. It takes two to three months for the flowers to bloom. The coffee bloom season in the Central Highlands often begins in early January and lasts until April.
Rainfall is one of the most critical variables affecting coffee tree blossoming. However, climate change has had a considerable impact on the time of the rainy season in recent years, making it harder to control the amount of water required to encourage flowering.

Flower buds grow on the branches a few weeks after the rain. Each flower bud on the coffee branch can develop into four blossoms and grow in clusters. The blossoms have a pleasant, jasmine-like perfume when they are in bloom.

The flowering stage varies depending on the cultivar. While Arabica may self-pollinate, Robusta grows only by cross-pollination. Robusta flowers are larger and more frequent (about 8-20 clusters per stem compared with 2-12 clusters per stem in Arabica). This helps to explain why Robusta yields more than Arabica.

The farmer will not interfere with the coffee garden during this period; the blossoms will bloom and fall on their own. The coffee blooms start to fall off after about 4 weeks, leaving behind a little circular proboscis known as the “carpel,” which matures into fruit during the next few months. Coffee berries grow in the carpels’ newly created tissues.

Farmers have utilized coffee flowers to diversify their revenue in various places because the picking of flowers has no effect on the development of the fruit. In Vietnam, I have yet to see this tea on the market, but it is possible that in the future, tea made from coffee flowers will become as popular as cascara tea.

2. How essential plants are coffee blossoms to a coffee plant’s species yield?

If the coffee flowers bloom at the same time, the fruit will ripen equally, producing coffee beans of consistent quality. To achieve this, the amount of water provided to the coffee plants must be consistent, and rainfall must be consistent and predictable. Rainfall is becoming more irregular in coffee-growing regions as a result of climate change.

Many coffee producers, particularly those in the Central Highlands areas, are suffering as a result of this.
Coffee flowers will bloom sporadically as a result of the inconsistent rainfall. Flowers on the same tree or branch might be pollinated at different times, resulting in variable maturation timeframes for the coffee fruit.

For the care and harvesting of coffee, consistency is crucial. People must harvest a coffee tree multiple times if it ripens unevenly, which takes extra time and work. Temperature, like rainfall, is an important component in the growth of coffee plants.

Regardless matter where the coffee farm is located, scientists agree that temperatures between 19 and 24o C are ideal for flowering to begin. The blossoming stage of coffee blossoms may become less consistent and more irregular when average temperatures rise.

I recall the years when a frost occurred unexpectedly during the peak of the coffee season, and everyone was concerned. People are concerned that too much dew would interfere with the tree’s blossoming and fruiting processes. Then there are years when unexpected rainfalls, not enough to cause the flowers to blossom, but enough to cause the blooms to rot, causing an entire community to become agitated, forcing them to rapidly install irrigation equipment. and get on the road as soon as possible.

3. How do people information make coffee and water it?

Farmers cannot expect a consistent amount of water during each blossoming season, especially in the provinces of Dak Lak, Dak Nong, and others, where the land is divided into two distinct seasons: the rainy season and the dry season.

People currently use some of the most prevalent pumping techniques:

People will pump water constantly for several hours throughout each irrigation cycle, depending on the plant’s thirst level. As a result, staying up all night pumping irrigation is fairly common in order to maintain the proper schedule.

People only used the local irrigation method in the past, when technology was not yet created, because it required a lot of time and work on their part. Not to mention that this method is inconvenient because it necessitates a lot of piping if the farm is vast and far away from water sources.

This strategy allows individuals to use the time between watering to rest or cut leaves, break branches, and fertilize coffee trees.

Water stress in coffee plants: how to manage it. Coffee growers have been experimenting with a type of irrigation known as “water stress control” in recent years.

This method entails restricting plant irrigation in order to promote more uniform flowering. Over the last decade, this strategy has become increasingly popular. It is easier for the farmer to manage flowering by halting irrigation for a longer length of time (up to two months). As a result, coffee fruit develops more uniformly, ensuring quality and consistency at harvest.

According to Embrapa study

According to Embrapa study, when done correctly, this irrigation procedure is successful and can help growers attain consistent outcomes when purchasing coffee. Coffee plants under water stress not only flower and develop more uniformly, but also generate higher harvests the following season, according to studies.

However, in order to do so, people must also understand when to water in order to avoid plants becoming prone to fungal infections or rust.

To promote uniform flowering of coffee flowers, scientists propose controlling nutrients, weeds, and pests in addition to irrigation. Flowering is a significant milestone in the coffee production cycle, even if harvesting is the most profitable step for a grower.