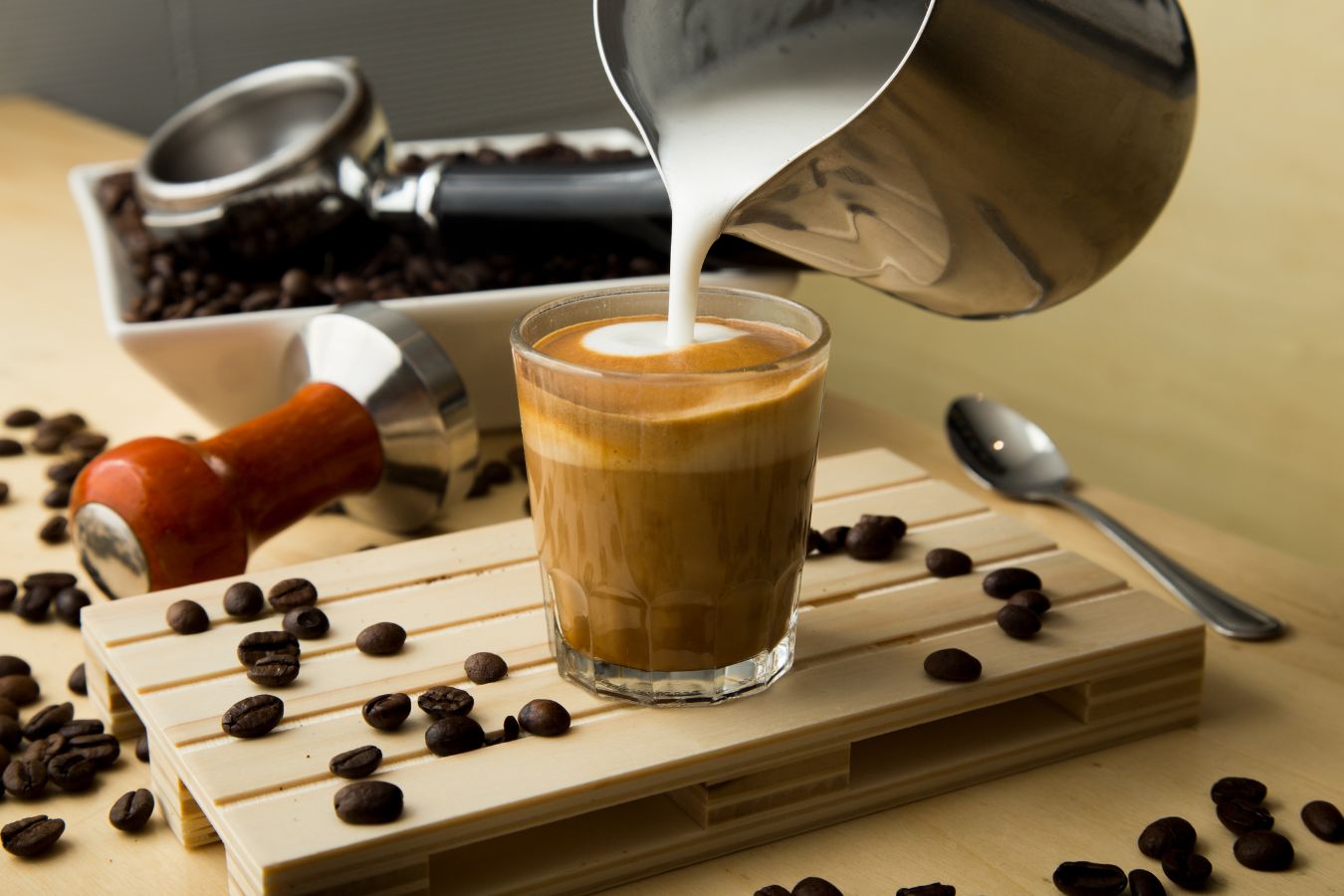 What is Cortado Coffee? When someone walks into a coffee shop and orders a cortado. Depending on the coffee shop and where they live, chances are they’ll get different drinks. Why is that? Because for some people, a cortado is a certain ratio between espresso and steamed milk. But for others, it’s a flat white or latte. And some bartenders say it’s up to the customer.

There are many opinions about what a cortado is. And of course, there is also a lot of misinformation among them. Whether you are a bartender or a customer. Even so, a cortado is still a staple coffee.

Continue reading to discover more versions of Cortado with Helena Coffee Vietnam and what the future holds to keep the drink alive.

What is Cortado Coffee?

A cortado is a drink made with espresso and about equal parts warm milk to lessen the acidity. A cortado’s milk is heated but not foamy and “texturized,” as it is in many Italian coffee beverages. The Cortado is from Spain, most likely Madrid, where it is popular.
Cortado is the past participle of the Spanish verb cortar (to cut), meaning “dilute,” and can apply to either coffee or espresso beverages in Spanish and Portuguese-speaking nations.

In Spain, a café solo corto is a small amount of black coffee (typically a single shot of espresso). Still, a café cortado is an espresso with a splash of milk, with the name cortado referring to other coffee or espresso beverages that have been “cut” with milk. The café cortado may be interchangeable with the Italian macchiato or comparable to the French noisette.

In Cuba, a cortadito is a small beverage similar to a café solo corto, consisting of a standard 30 mL (1 US fl oz) espresso shot; however, unlike the solo corto, the Cuban cortadito is generally cut with heated sweetened condensed milk, which is a more readily available preserved form of milk, whereas fresh milk was historically frequently unavailable.

A cortadito is traditionally served in a glass with a metal ring base and a metal wire grip. There are various nominal variations, such as cortado condensada, café con Leche condensada, or bombón (espresso with condensed milk); Leche y Leche is a similar variation, but with condensed milk incorporated throughout and a dab of cream on top.

The cortadito drink, introduced to Miami’s Little Havana district by Cuban Americans in the 1960s, is now available across the city and is a significant element of everyday life, particularly among Cubans. The cortadito, on the other hand, is a drink unique from Cuban-style coffee, which includes sugar in addition to milk, and it has a brewing process similar to espresso.

However, in non-Spanish-speaking nations, when it is available on a specialty coffee menu, the Cortado should be separated from the Italian caffè macchiato, cappuccino, or flat white.

A macchiato has only a small quantity (a mark or spot) of milk foam, whereas a cappuccino contains saliva and milk. A flat white is produced with steamed and textured (e.g., microfoam) milk, resulting in a hotter and lighter drink that is more closely akin to a caffè latte.

In Australia, a comparable drink is called a piccolo latte or just a piccolo. This is a single shot of ristretto served in a macchiato glass with steamed milk, similar to a cafe latte. The galo, a giant drink popular in Portugal, employs 1:3 proportions but is otherwise identical to both cortados and manchados.

Other names and spellings

Tallat is the Catalan term for being cut, ebaki is the Basque phrase, and pingado or garoto is the Portuguese word. The word’s meaning varies by area in the United States, but it is commonly referred to as a cortado on the East Coast. Costa Coffee distributes cortados in the Czech Republic under the brand name corto classic.

In San Francisco, a Gibraltar is served. A representation of a typical Gibraltar coffee drink in Silicon Valley. The word Gibraltar came from San Francisco, California, where roasters – initially Blue Bottle Coffee Company, then Ritual Coffee Roasters, and others – pioneered the cortado fad by serving the drink in Libbey Glass Company glassware with the same name.

A cortado is a broader term for many cut beverages. In contrast, a Gibraltar is defined explicitly in its proportions by the constraints of its cup size: a Libbey “Gibraltar” glass contains 135 mL (4+12 US fl oz), 60 mL (2 US fl oz) of which is filled by a standard double espresso shot and the remainder by foamy steamed milk. While some sources claim there is no difference between a Gibraltar and a cortado, businesses that serve both beverages often distinguish Gibraltar by a richer, more velvety texture and a colder, lukewarm temperature.

Until now, there is not much information about the origin of Cortado. But in reality, it comes from the Basque Country of Spain. The term cortado in Spanish means “to cut.” This term refers to cutting milk through the espresso’s intensity. This helps reduce acidity while preserving the flavor of the coffee.

Traditionally, cortados are served with little foam and a 1:1 milk/espresso ratio. The milk is heated until a thin froth is created before being added to the espresso. Cortado is usually served in a small cup with a metal base and handle. Based on appearance, the Cortado is often confused with the Australian flat white, macchiato, or piccolo.

Nino Tusell is the Owner of Tusell Tostadores, a roasting company in Barcelona, ​​Spain. He said in Spain, a cortado is an espresso with some milk. It can be 1:1 or 1:0.5, with less milk than coffee. Visit Spain, and you may be introduced to a cortado and this traditional ratio. However, you can enjoy other versions of Cortado if you go to other countries.

An article by the Specialty Coffee Association on dairy beverages posits one thing. Although the idea of ​​standardization is fascinating, we all want a standard to work on. But it’s important to understand that drinks are a product of culture. And for the Cortado, this mainly applies.

Usually, the composition of the Cortado depends on what the customer requires. Camilo Cárdenas is a bartender at Brew92, a coffee shop in Saudi Arabia. Traditionally, he said, a cortado is just black coffee and some milk. It can be hot or cold milk. Later, when people regularly ordered this drink in coffee shops, the Cortado was transformed into espresso with a small amount of hot whipped milk. Camilo also adds that his cafe serves a cortado with two shots of espresso and steamed milk. A cortado is slightly smaller in size than a flat white.

The difference between each person’s opinion is only about the ratio between espresso and milk. Paula Chaverri Echandi, owner of Café Sikëwa in Costa Rica. He said a cortado is an espresso and an ounce of hot milk.

Bruno Danese is the owner of Japan’s Hoccino Coffees. Bruno says it’s espresso combined with steamed milk in a 1:1 ratio. He adds that a cortado can be about 3 ounces or as hefty as 16 ounces as long as the ratio of coffee and milk remains the same.

Baristas and other coffee professionals have other ideas. Lanz Castillo, owner of Candid Coffee in the Philippines. He says it’s 1 ounce of ristretto with 2.5 ounces of hot whipped milk. Meanwhile, Melaleuca Head Barista Johnsy La Jessica Satriani says it’s called macchiato in Italy. At this point, the Cortado still includes an espresso shot with milk but is served in a 50 ml cup.

As Cortado spread from Spain to cafes around the world, its recipe evolved to meet the needs of local consumers. There has been a significant change that the Cortado has undergone upon arrival in the United States. Here, servings of coffee drinks have increased steadily over the past half-century. And it’s not uncommon to find the 20-ounce beverage offered at coffee shops in the United States.

A famous version of the Cortado is Gibraltar. Time Out USA says it was invented by Blue Bottle Coffee Company, San Francisco, in 2005. This version of Cortado is served in a glass called Libbey Gibraltar, about 4 ounces. Includes two shots of espresso and two glasses of steamed milk. For this reason, many third-wave coffee shops find the Cortado synonymous with the cup’s name.

Rodolfo Ruffatti Batlle is the CEO of a green coffee import business in Berlin. He said many famous versions of the colorado, including the Cuban cortadito. This version is popular in Cuba and Cuban immigrant communities. Translated as “chopped,” it is made with Cuban espresso with a thick layer of foam.

This dark-roasted espresso is whipped with sugar to give it a caramel color.

When the Cortado was brought to the big coffee chains like Starbucks and Costa Coffee, each chain had grown in its direction. Starbucks cortado is made with ristretto topped with milk. While Costa Coffee, the world’s second-largest coffee chain, describes its Cortado as smaller and more luxurious. At Caffè Nero, the fourth largest chain in Europe, the Cortado is made with an espresso-to-milk ratio of 1:2 and 0.5 cm of micro-foam.

The increased prices may be why each relatively small-sized Cortado is still on the menu today. Some businesses have moved to cut costs by raising prices and downsizing. Costa Coffee recently adjusted sizes and prices at certain stores. This adjustment is based on industry trends and consumer feedback. This could indicate a move towards smaller drink sizes at higher prices.

Mike Chapman is the owner of the 1914 Coffee Company in Canada. Mike has admitted that inconsistencies in size and proportions can be frustrating for coffee shop owners.

If milk consumption continues to plummet as it has in the past few years, it may not be popular with customers and coffee shops. Cargill, an international company in food, agriculture, nutrition, and risk management, released a White Paper in 2018 highlighting the changing consumer attitudes about dairy worldwide. Has declined over the past two decades.

The reason is that consumers – especially in the most prominent dairy markets have taken action to deal with worries about allergens and hormone use. In addition, they also noticed the unhealthiness of some dairy products.

Hot whipped milk gives the Cortado a smoother texture and mouthfeel. And this also means that cortados made with milk substitutes may be in short supply.

With so much confusion surrounding what a cortado is, coffee shops may decide to drop the names altogether. Research indicates that many customers are confused about the number and complexity of coffee beverage options offered. To simplify ordering and pricing, coffee shops may switch to asking customers to describe the drink they want.

Cortado comes in many distinct versions, but the one you’ll enjoy is tailored to where you live. So use what you’ve discovered about Cortado to create a recipe that suits your unique taste.