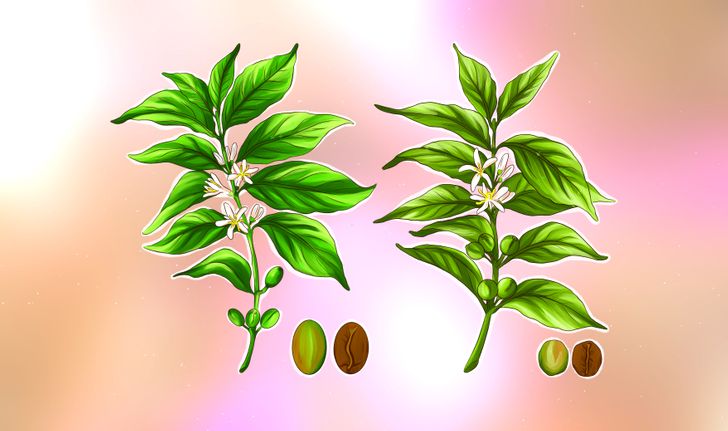 Compare Arabica and Robusta coffee | Vietnam coffee – Helena., JSC: With more than 120 species of coffee cultivated around the globe, there are only two that appear in your morning cup of coffee: Coffea arabica – which means Arabica coffee; and Coffea canephora – also known as Robusta coffee.

After roasting, Arabica & Robusta beans look pretty similar at first glance. But in fact, they are entirely different in taste, growing conditions, price… These factors are partly influenced by availability from genetic characteristics, origin, plus long farming history. On the other hand, the quality model of the coffee industry has generally widened the gap between Arabica and Robusta much more.

Based on a basic understanding of coffee varieties. This article provides an overview of the main differences between Robusta and Arabica.

Origin of Arabica and Robusta

Robusta is a “brand name” given to the Coffea Canephora species to highlight its attributes. It was discovered in the Belgian Congo (now the Democratic Republic of the Congo ) in the late 19th century, and its commercial potential is clear. It can grow and bear fruit at lower altitudes than existing Arabica plants, at higher temperatures, and is more resistant to disease. These attributes are still the driving factor in much of the production of Robusta today, and because of the way it is grown, it is considerably cheaper to produce.

Although Robusta has long been regarded as his / their brother (madder) of Arabica, recent research suggests that not so. It turns out that Robusta is the parent of the Arabica variety. By analyzing the genetic sequences of species of the coffee genus, scientists discovered that, somewhere in southern Sudan, Coffea Canephora crossed with another species called Coffea euginoides. Coffea arabica  – ie Arabica coffee.

Long after Arabica coffee was widely cultivated, it was not until the 1800s that Robusta was found in West Africa as a native plant of the rainforests around Lake Victoria in Uganda. Today, both coffee varieties are available almost worldwide. But most of the world’s Robusta is found in Central and West Africa, parts of Southeast Asia, especially India, Indonesia, and Vietnam. At the same time, Arabica accounts for about 70% of the global cultivated area & is distributed mainly in East Africa, Central, and South America.

Historically, however, Arabica was the starting variety for global coffee farming. Since the 9th century, wild Arabica bushes have been found in the rain forests of Ethiopia. By the 15th and 16th centuries, Arabica seeds quickly crossed the Red Sea to neighboring Arab countries before following Dutch voyages worldwide in just a few centuries. See also the history of coffee.

First of all, coffee plants, in general, prefer a mild, slightly humid climate and are sensitive to temperature changes. They are highly susceptible to freezing in cold weather, which can cause rapid damage over large areas and last for many years – These are the few things Arabica and Robusta have in common.

Both coffee varieties are mainly found around the equator, in tropical and subtropical regions – what we call the coffee belt (between 23 o N and 23 o S). There is a clear difference in the optimal environment between these two species.

The indigenous territories of Robusta coffee stretch from Central Africa to the Gulf of Guinea and Uganda. Since it is native to equatorial rainforests, Robusta can grow in lowlands from 250 to 1500 m, with an optimal mean annual temperature ranging between 22-26°C (DaMatta and Ramalho, 2006). ). Compared to the vast territory covered by Robusta, Arabica plants appear to be much more limited. Wild Arabica plants are growing in the tropical rainforests of Ethiopia and the Boma Plateau (South Sudan), at altitudes between 1200 and 1950m with an average annual temperature of 18 to 21°C (Davis et al. colleagues, 2006).

In addition, rainfall patterns in each area also affect each coffee variety’s growth and flowering cycle. Typically,  Arabica grows in regions with seasonal rainfall of about 1100-2000 mm/year, as its deep roots allow it to survive even the shallowest soils dry. The above guaranteed growing conditions enable Arabica to flower and produce results after four years of cultivation, with each flowering-harvesting cycle in 9 months. On the other hand, Robusta only takes two years to harvest, but each crop takes longer, about 10-11 months. They are grown in areas where the weather is unstable and need more rain, 1200 to 2500 mm/year.

Ecologically, Arabica coffee bushes are usually shorter than Robusta, 2.5-4.5 meters in height (than 4.5-6.5 meters for Robusta). Structural differences also exist between the beans of the two coffee species. While Arabica coffee beans are generally elliptical, oblong, and longer, Robusta beans are rounder & smaller. This may explain why each type requires different roasting techniques.

In terms of yield, each Arabica tree will produce about 1-5 kg/crop, while Robusta can give double that, making the cost of growing Arabica much higher than Robusta in the same area. crop. – However, there are many new varieties of Arabica, some of which are much more productive.

At the genetic level, Arabica has twice as many chromosomes (44) as Robusta (at 22). This means that Arabica is a self-pollinating (diploid) crop, i.e. it will have fewer mutations and fewer variations over its life cycle than Robusta.

To unlock the difference in flavor between Arabica and Robusta coffee, we can start by talking about the chemical components in the beans of each coffee variety, such as fats, sugars, and acids; here are The main groups of substances responsible for the taste of coffee after roasting.

Arabica contains more lipids (60%) and nearly twice the sugar concentration than Robusta; these sugars are essential precursors in the roasting process, helping to form several critical aromatic compounds and contributing to flavor overall taste. This allows Arabica to produce a cup of coffee that is richer in flavor and complex in texture than Robusta.

However, Robusta with low oil content (10-11.5%) offers better crema stability in espresso blends. Because the iridescent golden foam – considered the standard of Espresso, is the result of tiny CO2 bubbles dissolved with fat droplets (and many other organic compounds) in water. But, too much fat foam will quickly disintegrate. Therefore, the combination of Robusta and Arabica gives a much higher quality of Espresso extract.

Due to the bitterness in coffee in general, which is mainly determined by the two main ingredients, Caffeine and Chlorogenic Acid (CGA) – And because Robusta contains twice as much caffeine and CGA, Robusta coffee beans will be much more bitter than Arabica. Robusta’s high levels of Caffeine and CGA help it fight diseases and fungi that thrive in hot, humid climates, such as coffee rust and berry disease. So Robusta’s strong resistance makes it easier to grow but less flavorful and cheaper than Arabica.

Although it failed to bring the preferred flavors to the coffee industry. But Robusta’s real mission lies not in its taste, but in its genome; Robusta’s victory lies in the fact that it has produced the Timor Hybrid coffee tree – the result of this natural hybridization that has given Arabica the world’s first rust resistant genome.

While Arabica has a variety of commercial uses, ranging from low-quality instant coffee to regular coffee, high-quality coffee in second-wave stores, or even specialty coffees, produce. On the contrary, Robusta has always been considered in the low-end category of the market. Its price is only half that of Arabica, and it is mainly used for instant coffee.

In its history, Robusta was not even recognized as an actual coffee compared to Arabica. It was only in the 1950s when instant coffee firms raced for profits by reducing the proportion of Arabica coffee in their products that Robusta was taken seriously. Then, it was not until 1960 that the New York Sugar and Coffee Exchange lifted the ban on importing Robusta coffee long before that.

For the instant coffee industry, price is far more important than taste. The global reliance on coffee as an “instant” use product helps Robusta account for about 40% of the coffee produced worldwide. World every year. This percentage is somewhat variable due to fluctuations in price and demand. For example, rising global coffee prices could lead to more Robusta production, as sizeable multinational coffee companies may need cheaper alternatives to Arabica.