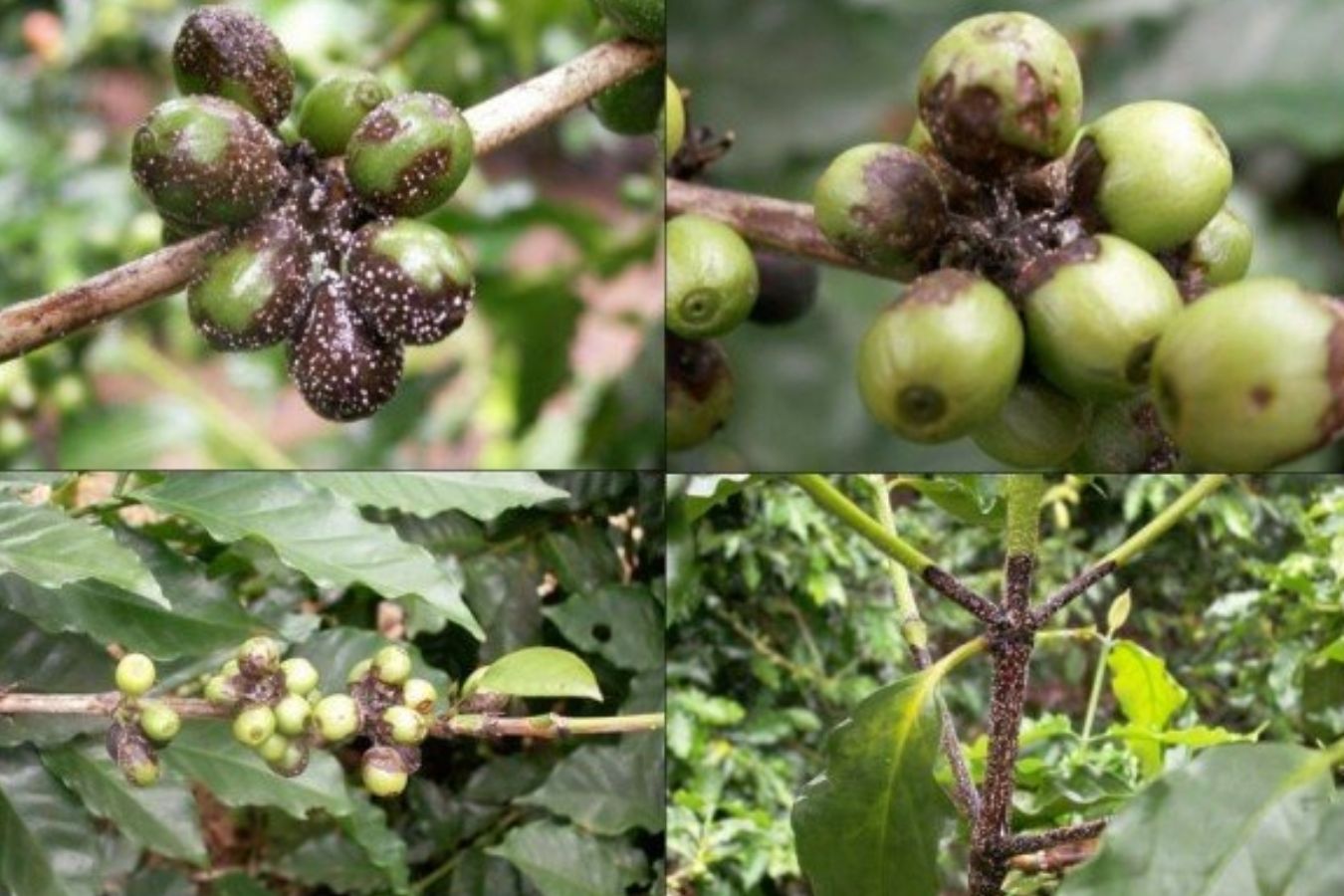 Corticium Salmonicolor Disease or Pink fungal disease on coffee trees (in some places called pink mold, pink cat disease, or powdery mildew). This disease is caused by harmful fungi, quite common on crops; for coffee trees, the disease is second only to dry branches and coffee rust. In today’s article, let’s learn about the causes, harms, and prevention of coffee pink fungus with Helena Coffee Vietnam.

The disease is caused by a fungus with the scientific name Corticium salmonicolor. This fungus usually thrives in the rainy season, when the temperature is between 28-30 degrees Celsius and the high air humidity (over 85%). Usually begins to cause damage in June-July, peaks in September, and then gradually decreases.

Especially for coffee plantations with a dense density, plants that are too shaded will thrive and tend to spread faster.

The harm of pink coffee fungus

When parasitic on plants, fungi will develop a system of suckers, also known as roots, that go deep into the body, sucking up the plant’s nutrients to live and simultaneously causing the vascular system to be destroyed. The infected body is not supplied with enough water and nutrients, so it will turn yellow, wither, and die.

Fungal diseases often clump together to form large patches, which, if not handled in time, will spread to large branches and main trunks. Make the tree exhausted, wither and then die.

The period of the fungal outbreak is usually when the tree is growing fruit, causing young fruit to drop a lot, reducing yield and the tree’s growth.

It is observed that the disease spreads on trees quite quickly but spreads to other trees more slowly. However, the disease is likely to apply in favorable conditions (a lot of rain, strong wind, and high level of dispersion due to thick planting…). Outbreak into an epidemic

How to prevent coffee pink fungus

Prevention should be better than cure; spray prevention at least 1-2 times a year at the beginning and middle of the rainy season. When the disease appears, pour 2-3 times 7-10 days apart to completely kill the fungus. When spreading, you should choose a calm, windless day to increase the drug’s effectiveness. Avoid hot or rainy days.

So, just now, we have reviewed some information about coffee pink fungus; this common disease causes serious harm if not handled entirely. I hope you have more information to prevent it effectively and bring a bountiful harvest.