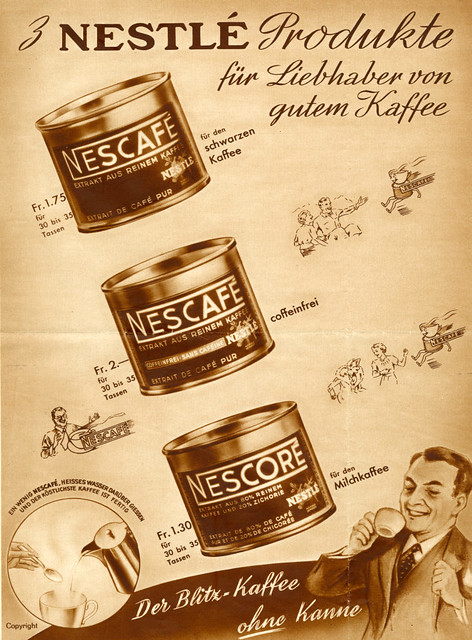 Most of us think that the heyday of instant coffee is over. Famous names like Folgers, Maxwell House, Nescafe, or “classy” like Starbucks VIA are gradually falling behind the wave of Specialty Coffee. Despite the convenience in the industrial age, fewer and fewer people opt for instant coffee. However, more than a century of birth, with a history of many fluctuations, instant coffee has never tended to come to an end.

The first inventions of instant coffee

Like many innovations in the food industry, the provenance of instant coffee is continuously evolving through various patents. According to Mark Pendergast in The Oxford Companion to American Food and Drink – Instant coffee was first born in 1771 (about 200 years after coffee was introduced to Europe). The patent belongs to John Dring ( Brother)

In the late 19th century, the Glasgow company invented Camp Coffee, a liquid blend consisting of water, sugar, 4% caffeine-free coffee grounds, and 26% chicory (19th-century coffee history shows the roots). The French once used chicory during the Napoleonic era because of the scarcity of coffee). In the United States, instant coffee was still new and was only used by soldiers during the Civil War in 1853. Meanwhile, commercial versions of Camp Coffee were popular in the market. UK retail.

The first wave of instant coffee

Back to America after the war. This is the period of solid development of instant coffee, which the history of the coffee industry has recorded as the “first wave of coffee” led by two “giants,” Folger and Maxwell House.

The predecessor of the Folgers Instant Coffee Company was founded in 1850 in California under the name “Pioneer Steam Coffee and Spice Mills. “ The owner is William H. Bovee. To build the factory, Bovee hired James A. Folger to work. By 1865, James A. Folger had become a partner of The Pioneer Steam Coffee and Spice Mills. And in 1872, he bought out other shareholders and renamed the company JA Folger & Co.

In 1889, James died, and his oldest son, James A. Folger II, stepped into the role of president of JA Folger & Co at the age of 26. During the 1900s, the company began to grow exponentially with the construction of the Folgers coffee factory in Texas. Since the mid-20th century, under the leadership of Peter Folger, this brand has been a significant influence on the North American coffee industry – the largest coffee market in the world. In 1963 P&G (Procter & Gamble) bought Folger’s instant coffee brand and removed the apostrophe from its name.

In 1884, Joel Cheek met Roger Nolley Smith – an English coffee broker, the two of whom were researching the perfect coffee blend. And in 1892, Cheek successfully marketed instant coffee to the Maxwell House hotel (Maxwell House bought the exclusive rights to Cheek’s instant coffee).

This initial step prompted Cheek to set up a distribution company with a primary partner, Maxwell Colbourne, Nashville Coffee, and Manufacturing Company. Later, Nashville was renamed the Cheek-Neal Coffee Company. Over the next few years, the Maxwell House Coffee brand became popular. In the 1920s, through advertising, the Maxwell House brand became widely known throughout the United States.

Back to the main issue, both Folger and Maxwell House brands were not successful with coffee quality because most of them used poor quality coffee and limited technology. Hour. However, the convenience and speed helped the above brands to lead the coffee industry at that time.

Inventions of the early 20th century

According to the two famous names, instant coffee is still relatively new at this stage. From the late 19th century to the early 20th century, a series of terms associated with the invention and reinvention of instant coffee include: