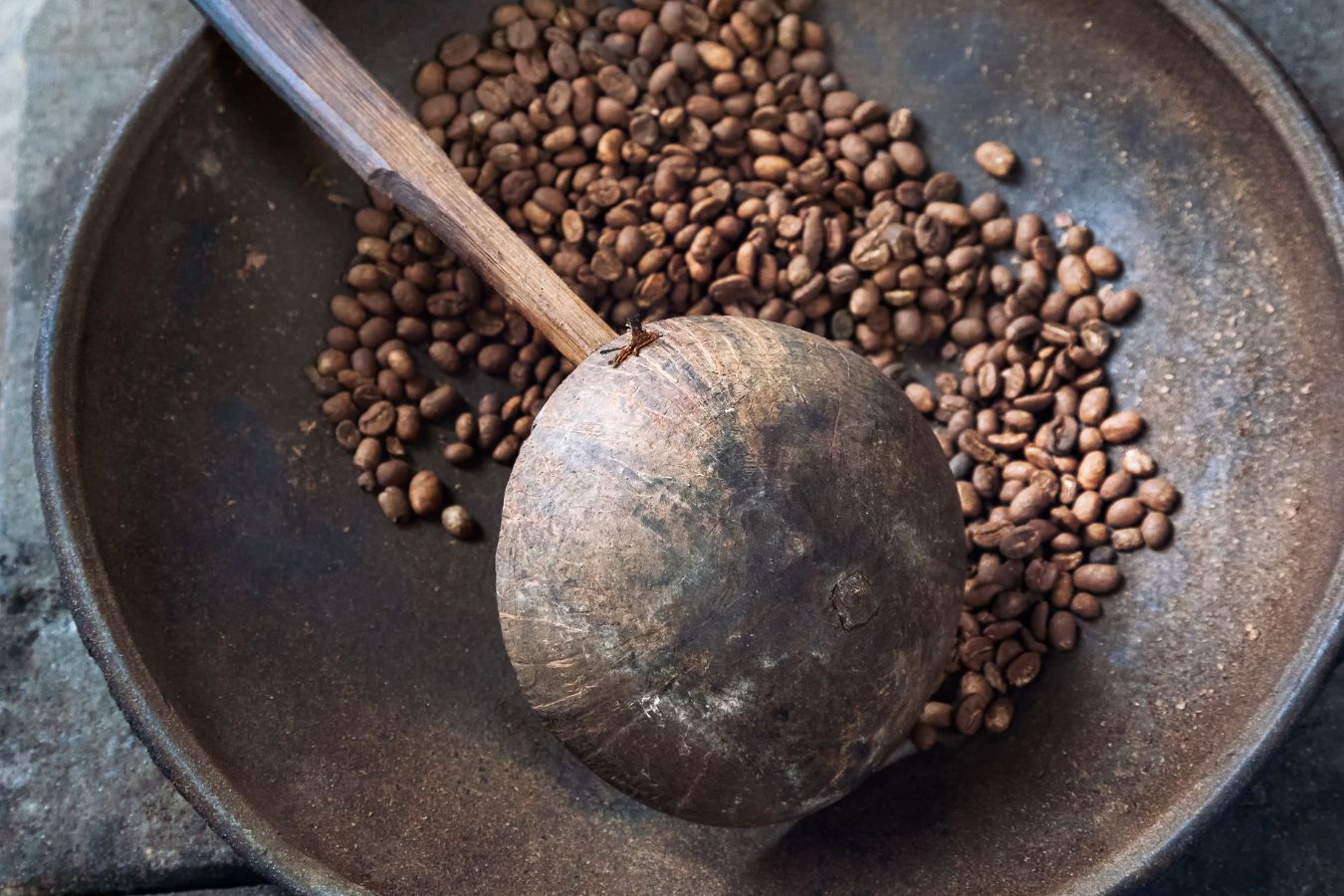 The first individuals to taste roasted coffee or espresso have done their job for ages, yet the Coffee could not have been as delicious as it is now. And how much do we know about this green bean bin’s early compatibility with fire after thousands of years of consumption?

Why are roasters built the way they are today, and how has this changed through time?

The Beginning Of Roasting History: First, Learn How To Roast Coffee Beans At Home

Story Match-made coffee was first regarded as a meal in Ethiopia circa 800 AD. The mature fruit was pureed and formed into spherical cakes, including the core and rind. The dried fruit was then given the same treatment. As a result, the most original coffee grinder ever is the actual stone mortar and stone pestle.

About 1200 to 1300 years ago in history, the original whole-grain dry-origin coffee cherries were roasted over a stove fire in earthenware or stoneware. — these were the original roasting utensils.

The first documented specialized coffee roasters appeared in Persia between the 1400s and 1500s. This roaster, which looks like a large perforated spoon with a long handle, is used to roast a tiny bit of Coffee at a time over a fire pit or brazier; the holes in the plate indicate that early coffee consumers understood the need for air circulation during roasting.

Between 1500 and 1600, Baghdad and the Arabs in Mesopotamia employed shallow pans (not sure whether to call them pans or spoons) with long handles and leg rests for standing by the fire to roast Coffee.

The handles on these coffee roasters are almost a meter long, and the basin is 20cm in diameter. A long metal spoon (spoon) is included for raking the seeds.

Early roasters’ concave form indicates a universal understanding of the significance of mixing throughout the roasting process; this recess lets the beans move more freely and cook more evenly.

This led to other improvements throughout the 16th century, most notably the roasting pan (more like a pot) from Cairo, Egypt, with a tight-fitting lid and a hand crank on top for mixing; it was made of bronze or cast iron, and French, Dutch, and Italian variations quickly appeared; they were trendy over the next century in Europe, Great Britain, and the American colonies.

Coffee roasting has gone a long way from the thin, perforated pans that toasted coffee beans over an open flame. However, this was the first and only consistent way of roasting coffee in the Middle East, Africa, and Europe at the time.

The demand for bigger quantities of coffee resulted in new ideas on how to roast coffee as the popularity of the beverage expanded.

Coffee is roasted in drums

The next great advancement in coffee roasting was the use of drums to hold coffee beans in the 17th century.

Because the heat was maintained inside the coffee roasting drum, the flames on the fire could be minimized, making it safer and more practical.

A more even roast could be produced by adding a hand crank to the drum, demonstrating how coffee roasters were beginning to comprehend how roasting may affect flavor characteristics.

Coffee roasting was given the industrial revolution treatment in the nineteenth century. Patents for more commercial roasters began to come in. Many people had been comfortable with roasting coffee at home until then.

In addition, the discovery of gas meant that the smoky scents and flavors produced by coal and wood over open flames could be eliminated, resulting in a cleaner coffee flavor profile.

Many innovators competed during this period of innovation to design a coffee roaster with characteristics that would make coffee roasting safer, more practical, and more consistent.

Who was the more powerful is a point of contention. From Richard Evans of the United Kingdom in the 1820s to Jabez Burns of the United States in the mid-1860s, and the Probat firm in 1880, who invented the ‘Kaffeeschnellröster‘ (quick coffee roaster).

Electricity was becoming more widely available at the turn of the twentieth century.

Many businesses, including the coffee industry, adapted by incorporating electric motors and heat to minimize labor strain and enhance roasting precision.

Coffee roasters were able to limit heat exposure thanks to their capacity to reproduce conditions, resulting in more consistent coffee roasting results.

The first breakthrough coffee roasting legend was the Cylinder coffee roaster. They first appeared in the mid-seventeenth century in the world and are said to have originated in Turkey.

These cylinders, made of tin or copper, were created with caps and long cranks to keep the beans circulating freely inside, which they believed helped Coffee preserve its aroma at the time.

Whether it was accepted at the time or not, the cylinder roaster was a significant advance over the open pan roasting process, which relied on the frequent movement of the beans to prevent direct contact with the heat.

Elford’s white roaster (tinned iron), which first appeared in London, England, around 1660 and is a cylindrical box with a long shaft and a sliding side door, is regarded as a significant forward in manufacturing.

Before the invention of the Elford roaster, Europeans would save roasting Coffee in ancient pudding pans and frying pans over coals rather than open flames.

The French and Dutch improved and perfected these cylindrical roasting cages to be a complete replacement for hot pan roasting.

The Dutch perfected a cylindrical roaster – considered the first design of a roasting drum – by combining the long handle of a Bagdad roaster with Elford’s idea of a roasting cage.

The horizontal cylindrical iron box has a long shaft for convenient mounting on the fireplace and is roughly 12cm in diameter and 15-20cm long. Green Coffee is put into the drum by a sliding door, and we spin the roasting drum slowly until the Coffee is uniformly cooked to balance the heat.

Between 1700 and 1800, a form of a small burner with horizontal cylindrical rotating drums for roasting Coffee was developed, which burned coke or charcoal and was made of iron.

Some models feature a top shield and a bottom stand, allowing them to be used over an open fire. Because of its bigger capacity, it may roast large batches in hotels and coffee shops.

The three-sided hood was meant to be suspended over a hearth for roasting larger volumes of coffee during the late 18th century. These were most often used at coffee shops or inns.

A patent for a commercial process of roasting coffee was issued to Richard Evans of England in 1824. It was a cylinder roaster with enhanced flanges that allowed the beans to be constantly mixed or turned while roasting.

The “Carter Pull-Out Roaster” was patented by Boston’s James W. Carter in 1846. Inside brick ovens, these were enormous cylinders. The ovens held the heat in and were more homogeneous, resulting in better and more equal roasts.

The cylinders could be drawn out of the furnaces on guides, thus the name “pull-outs.” The head roaster would pull the cylinder out halfway and inspect the beans to determine whether they were ready.

The cylinder would be totally pulled out once it was ready. The 9-inch flap that ran the length of the cylinder was opened, and beans were spilled into wooden trays beneath the cylinder before being replenished with green beans.

Two men with shovels and hoes would be required to stir the hot beans until they were cool.

Coal was used to heat these machines. The cylinders were not perforated at the time of manufacture. This happened later. Some roasting establishments did not have wooden cooling trays in which to pour the hot beans. In some circumstances, the beans were dumped on the floor and stirred as the guys poured water over them.

This type has seen numerous upgrades throughout the years. Perforated cylinders, a perforated false bottom on the cooling trays for greater cooling, and the removal of chaff and small stones are all improvements. The roasters of the future were on their way!

Between 1880 and 1882, a dozen further patents were issued.
Alexius Van Gulpen made a significant contribution to the advancement of coffee roasters.

Circular air blowers to allow fresh air into the cylinders, fire dampening devices, cooling exhaust systems, and the all-important moving mixer to eject the coffee from the cylinder into a circular cooler, similar to today’s equipment, were among his creations over the years.

Theodore Von Gimborn received a patent in 1892 for employing a gas flame in a spinning cylinder.

Since the Bagdad Roasting Pan and Stirrer, coffee roasting has come a long way. It’s no wonder that in today’s digital environment, the world’s most enjoyable drink has profited from this technology.

Today, almost every roaster roasts with extreme precision. Gas is used by the majority if not all. It is now feasible to program a limitless number of profiles for your unique preferences, types of beans, or blends thanks to computers.

With so many variables such as outdoor temperature, humidity in the air, and other things, consistency was always hit or miss. You may set your roaster to any profile imaginable with perfect consistency with numerous high-quality roasters.

Coffee roasting has, without a doubt, achieved its pinnacle. Of course, improvements will always be made throughout time, primarily in terms of appearance. We owe a great deal to the inventiveness and workmanship of previous generations of coffee enthusiasts.

Popularity Of Roasting Coffee In The Market

Culture Roasting coffee was nearly not popularized until the 19th century, and green Coffee was only drunk in coffee shops or made in restaurant kitchens after leaving the Arabian peninsula. European family or – this grain has yet to be commercialized.

The demand for the stimulant of Coffee surged rapidly only when the whole of Europe was roaring in the great industrial revolution, as consumers demanded that Coffee offered as pre-roasted be “better” than the sort they could prepare themselves.

At this time, new coffee roasting equipment was born, abandoning its origins as “kitchen utensils.” Coffee houses are also available