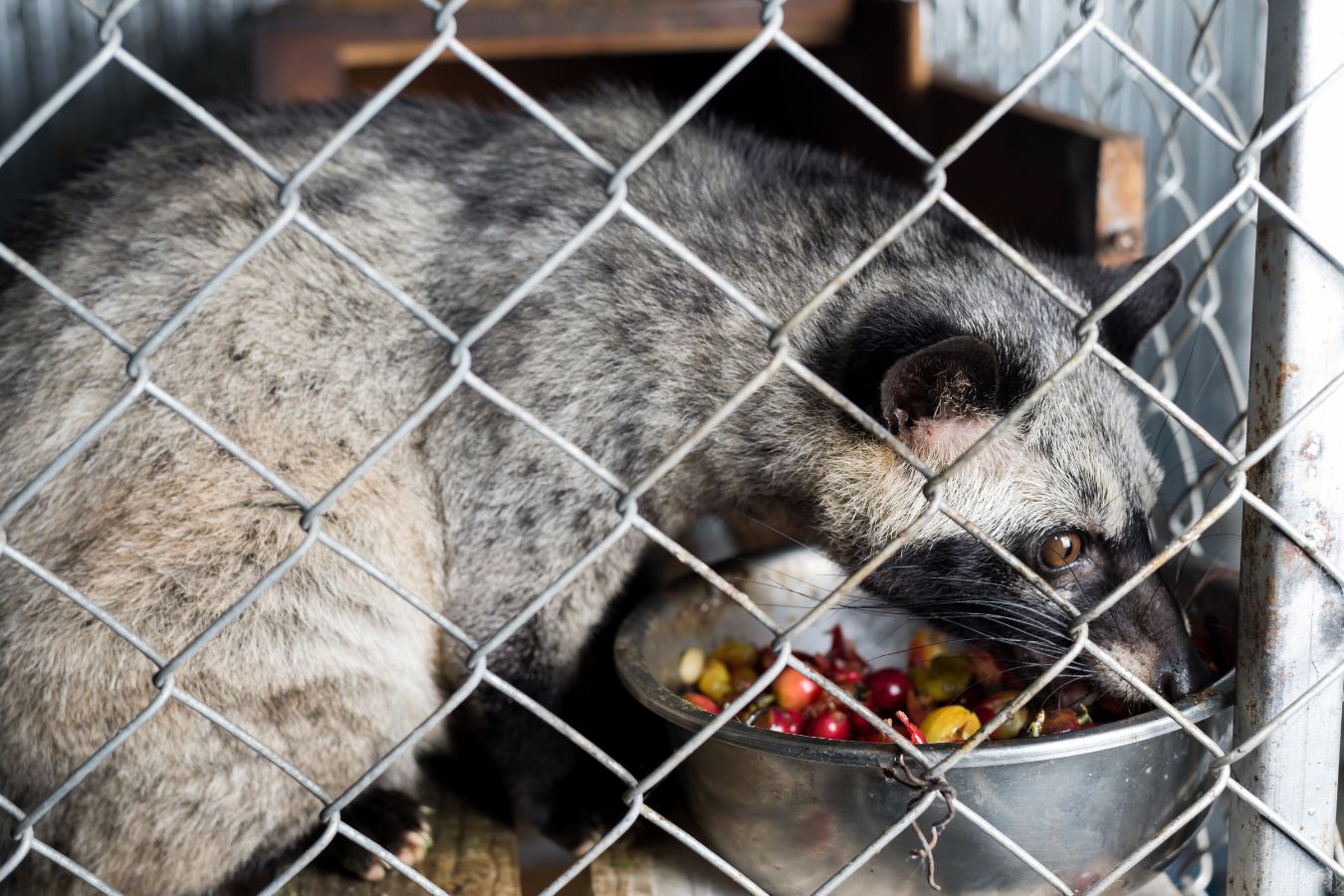 Kopi luwak is coffee made from the droppings of civets. It’s super expensive, rare & luxurious, but this is terrible news for civets. It’s hard to imagine marketing a food product made from animal feces, such an unattractive approach. Still, it seems to have worked: The Kopi Luwak campaign set it up, succeeded, and maintained attractiveness in several markets. It’s the most expensive coffee in the world and made from poop. Or rather, it is the leftover coffee beans from the digestive system of the Indonesian Civet. National Geographic magazine once reported that it could sell for up to $80 in the United States.

The coffee industry has seen an unusual increase in demand for Kopi Luwak, partly due to claims of natural fermentation taking place in the animal’s digestive tract. Some people are just out of curiosity and its luxurious reputation that they don’t care how badly the civets are being mistreated!

“Kopi” is the Indonesian word for coffee, and “Luwak” is the country’s name for the Asian Civet. In different countries, there are other names for this coffee. It is also known as Civet Coffee (in consuming countries), Alamid Coffee (in the Philippines), and Weasel Coffee (in Vietnam).

This process begins when the Civet, aka the Common Palm Civet, a shy, solitary nocturnal wild animal, prowls the coffee plantations into the early morning harvest night and eats the most delicious ripe coffee berries. They cannot digest the beans of the coffee cherries, so they excrete them with… feces. These beans are collected by humans, selecting the ones that can be roasted and creating a unique flavor of coffee, often touted as gourmet coffee, for thousands of dollars. Dollars per kilogram.

Kopi Luwak coffee was originally known by workers on coffee plantations in Indonesia – they were forbidden to pick coffee for their own use. However, wild civets sneak into the plantation to steal the ripe coffee cherries, and then workers collect their droppings for the seeds – they don’t “pick” them, of course.

Soon, the planters discovered the potential of the new coffee, which was said to be “smoother” and “smoother in taste.” Gradually, Kopi Luwak’s production increased, but this coffee’s annual production remained extremely low. The imbalance between supply and demand has led to the birth of an industry, “Kopi Luwak.”

Some coffees are prized for their long-standing reputation or limited supply, be it coffee from the islands of Hawaii or coffee from regions like Yemen, Ethiopia, etc. Other types of coffee, like Kopi Luwak, put on a particular “mystery” to push up prices. Kopi Luwak is known for its exotic cooking. According to experts, Kopi Luwak is so special because wild civets choose only the most delicate coffee berries to eat.

Enzymes in the Civet’s digestive system change the protein structure in the coffee bean, removing some of the acids to create a more distinct cup of coffee. Capturing civets on a coffee-only diet will result in poor-quality products (National Geographic). So with Kopi Luwak, a higher price does not necessarily mean higher quality.

At first, the Kopi Luwak trade benefited these creatures. Since not only in Indonesia, the Asian civet, which attacks commercial fruit farms, is often seen as a pest, so the development of the “Kopi Luwak industry” has encouraged the population. local protection of civets for valuable manure.

But once the Kopi Luwak civet and coffee gained popularity, along with Indonesia’s development as a tourist destination where visitors want to see and interact with wildlife, there became more and more wild civets—locked in cages on coffee plantations. This is partly for coffee production, but it can also make money from marketing to tourists to see civets.

Explaining the quality of Kopi Luwak

Experts from the specialty coffee organization ( SCA ) have made many arguments about the actual taste of Kopi Luwak. One of the strongest arguments against this coffee – and one that meets the consensus in the industry – is that it tastes terrible.

Others in the industry have reacted more enthusiastically to Kopi Luwak’s rhetoric on several fronts. Thompson Owen of Sweet Maria’s in Oakland, CA, started with the “Say No to Kopi Luwak Coffee” stance and stated in the description, “A message needs to be sent to the coffee industry that Kopi Luwak coffee shouldn’t be. Accepted, it tastes bad, doesn’t serve the interests of coffee farmers, distracts from the message of quality coffee, and we condemn cruelty to animals.”

Rocky Rhodes of International Coffee Consulting offers a more detailed analysis and shares his experience with this coffee. “On a farm in East Java, I had the opportunity to evaluate a batch of Luwak coffee from ferrets raised in captivity and fed the same coffee. After trying several samples, it is clear that Luwak coffee is sold for its story, not superior quality.”

Kopi luwak is the coffee industry’s ‘goose liver’, it tastes like dog food and costs the same as caviar – A critical comment from sprudge

After all, Kopi Luwak is made from animal dung. It tastes terrible, is expensive, and is not the best experience for the animals that produce it. So what exactly is it that people are responding to? If experts vehemently deny any qualities of Kopi Luwak, will consumers like it? Or are they responding to the media hype’s reputation – quote SCA communications specialist Lily Kubota.

There is no way to tell whether a bag of Kopi Luwak is made from wild civets or in a cage. Investigations by the Wildlife Research Unit at the University of Oxford, the London-based World Wildlife Fund, and the BBC’s undercover investigation in 2013 have exposed how Civets kept in cages under inhumane conditions are labeled as wild civet coffee to be traded in Europe.

“The first time I read a description of Kopi Luwak was in 1981, in short, in National Geographic Magazine. Ten years later, in 1991, as the coffee director of Taylors of Harrogate, I was the first to import Kopi Luwak into the West – with a kilo. Over the next 20 years, Kopi Luwak became a “legend” for the most expensive coffees, a product of “reputation” in its own right, offered by every aspiring coffee retailer worldwide. World, appearing on CNN News, hit media shows, and The Bucket List (a Hollywood movie) – I’m sorry, I’m the one who started it all….”

Today, it is impossible to find real wild Kopi Luwak, nearly all of them coming from civets kept in captivity with conditions of care, which deserves condemnation. Coffee companies worldwide still market Kopi Luwak through this fascinating wildlife story, many arguing that there is only about 500kg of Kopi Luwak annually – a scarcity that justifies the price. It’s a retail giant. But in fact, (although no exact figures are available) farmers in India, Vietnam, China, and the Philippines have also jumped in – with as little as 50 tonnes, possibly even more.

There are some minor signs that the industry is finally getting fixed. Several coffee certification bodies, including the Rainforest Alliance, have banned using their stickers for Kopi Luwak. The Sustainable Agriculture Network (SAN) standards prohibit the hunting and use of wild animals raised on farms and will not certify any Kopi Luwak products.

However, people always have the tendency and ability to do the opposite of the principles they set themselves. Traders began doing business with suppliers claiming to be humane civet breeders. The supplier states that all their farmers are trained and supervised not to mistreat the civets. The coffee market sees this move as a positive, especially since farmers are paid ten times more than they would have previously kept civets in cages – thanks to a certified supply chain. This, perhaps, has made the rich feel less “guilty.”

The trend for coffee beans to pass through the stomachs of animals has continued to carry over into the elephant industry, with similar techniques in Thailand. The Black Ivory Coffee Company claims that their “Black Ivory Coffee” fermentation process is different from that of Kopi Luwak since elephants are herbivores. Even so, the concept remains the same. Again, they use animals to create products for us naturally – only it hasn’t achieved the same reputation as Kopi Luwak.

Trading from Kopi Luwak makes a lot of money and civets are not the only victims, countless other types of coffee crap are now springing up all over the world – from Thai Elephant dung to Brazilian Jacu and Bonobo monkeys. has been flattered by the press to serve the insatiable desires of consumers – TheGuardian .

So why is Kopi Luwak attractive?

Kopi Luwak is extracted from… Animal dung tastes terrible, it’s expensive, and it may not be the best experience for the animals that produce it. So if experts vehemently deny it, will consumers like it? Or are they responding to its reputation from media hype?

While the average consumer won’t pay the exorbitant price this coffee demands, there is a segment of the wealthy in the United States, Europe, and East Asia. They are willing to pay for a novel or exotic experience. Luxury. It doesn’t have to be delicious, coffee drinkers don’t have to like it, and it doesn’t have to be “affordable” for some who want it.

That’s the story. And whatever your thoughts on the quality of Kopi Luwak, there always seems to be a market for products that claim rarity or “wealth.”