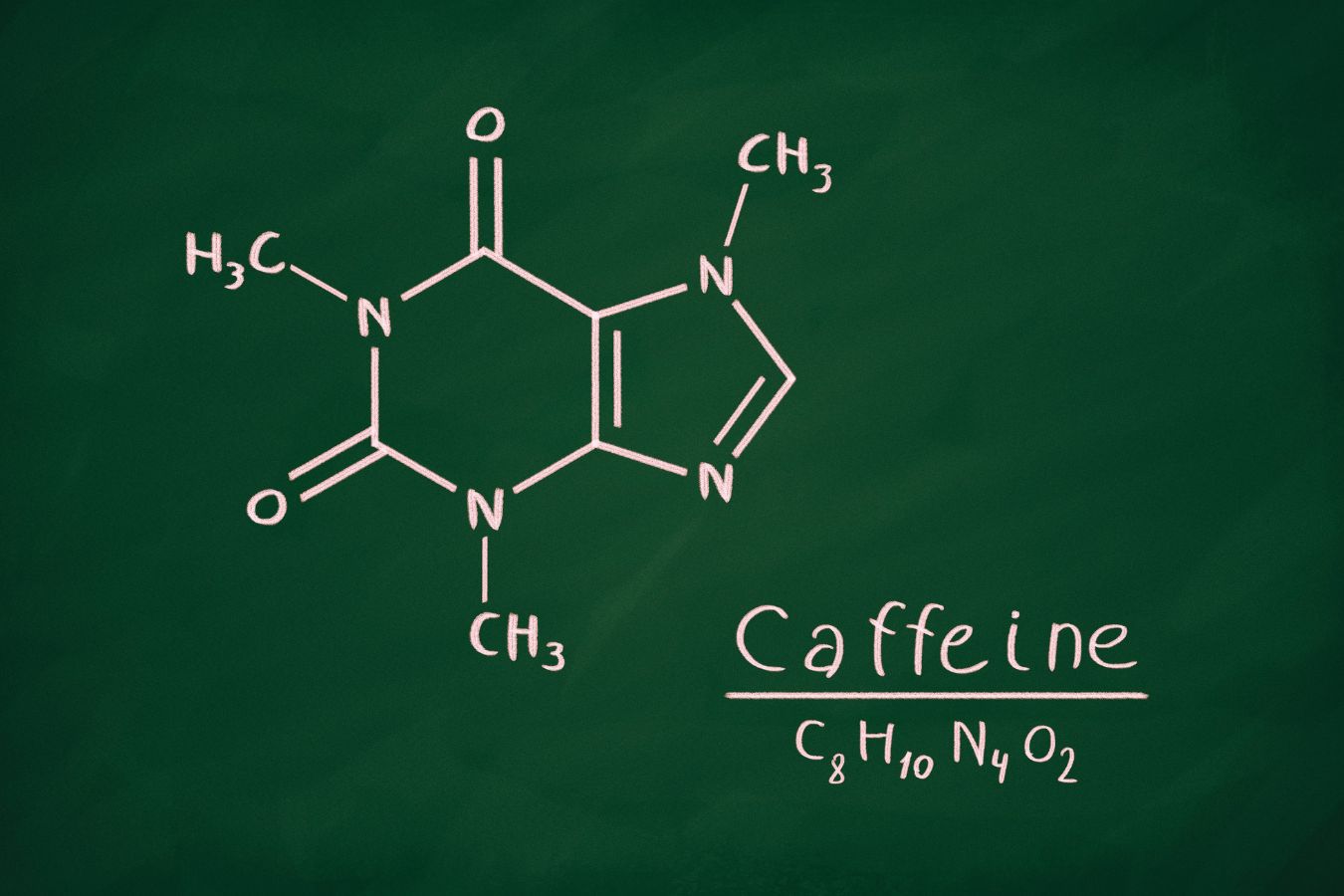 Caffeine is no stranger and has a lot of attraction in the current context. With just a click of the mouse, people can “dig” all the relevant information, from the formula, origin, and role, to each chemical reaction of Caffeine. However, Google – is not a chemist, so this article will shed light on precisely what Caffeine is, how it works, and how much Caffeine is in your espresso cup. Let’s learn about Caffeine in coffee with Helena Coffee Vietnam!

Caffeine, also known as Trimethylxanthine, Caffeine, theine, mateine, guaranine, methyl theobromine, or 1,3,7-trimethylxanthine, is a xanthine alkaloid that can be found in coffee varieties, in tea, cola seeds, guarana berries, and (small amounts) in cocoa beans.

The chemical formula of Caffeine is C8H10N4O2.

Caffeine seems to be a reasonably stable molecule in coffee. In other words, it doesn’t seem to combine or interact with other molecules. However, it tends not to follow typical transition steps between phases.

So instead of changing from solids to liquids to gases, it often skips the liquid phase and turns it directly into a gas — a process called sublimation. Sublimation for Caffeine can start at 178°C. So this is considered one of the very durable compounds with heat and is least lost during roasting.

The role of Caffeine in coffee plants

The essence of Caffeine in the coffee plant is a white powdered alkaloid that causes part of the bitterness felt in coffee. Caffeine is commonly found in the leaves and fruits of more than sixty varieties of coffee cultivated worldwide as a natural insect repellent.

In Arabica coffee, Caffeine accounts for an average content of 1.2%, while Robusta is higher, at about 2.2%. This is one of the factors that help Robusta coffee plants to thrive in harsher environments and be more resistant to pests.

Contrary to popular popular popular notions, caffeine content barely changes during coffee roasting. Due to the high decomposition rate, the Caffeine in the cell structure of coffee beans is very stable, even more than 200°C (400°F).

It’s good to know that only 15% of coffee’s bitterness comes from caffeine, and the remaining 85% comes from all the other bitter compounds. – Danielle Reed, Monnell center

The impact of Caffeine on the body

Like other drugs, Caffeine has a particular impact on mental and physical functions. Repeated studies have shown that Caffeine has a sedative effect (it stimulates the central nervous system) and is prone to euphoria (which improves physical activity).

Although recent studies show it does not dehydrate, it is also a diuretic. Caffeine also raises blood pressure, but this effect is only temporary. And while some studies indicate that Caffeine increases calcium loss – this negative effect can be eliminated with as little as two tablespoons of milk per day (drink a milk coffee).

Indeed, many studies show that Caffeine may be beneficial for human health. Studies have shown that it can help relieve pain, prevent migraines, reduce asthma symptoms, and improve mood. As a psychoactive substance, it increases alertness, awareness, and reaction speed; Because it combats fatigue, it improves performance in alert tasks such as driving, flying, solving simple problems, and data entry.

There have been many studies that prove caffeine has many good sides, (but there hasn’t been an official study on the negative effects of caffeine). The World Health Organization (WHO) does not classify caffeine as a substance. The U.S. Food and Drug Administration (FDA) has classified caffeine as “Generally Recognized As Safe.”

About the stimulating, arousal, alertness- role, the part of coffee obtained from neurological reactions. On the other hand, Caffeine can also affect our sensory pathways in ways we don’t yet fully understand. This compound not only binds to the surface of the receptor cell but can also enter the cell, where its ongoing effects are unclear.

Here are some of the most apparent mechanisms of the role of coffee or Caffeine in our bodies.

Denial of Adenosst, studies of “alertness” caused by coffee have focused on

Adenosine, is a chemical your body makes to help you sleep. It binds to receptors in your body to complete a chemical reaction that causes your body to slow down, lower blood pressure and dilate blood vessels to provide oxygen that is good for natural sleep.

Adenosine, one of the culprits of morning drowsiness and sluggishness after lunch, slows down nerve activity and prevents the release of many good-feeling substances in the brain, including dopamine. But when Caffeine circulates in the blood, it will easily take the place of Adenosine in receptors in the brain (and elsewhere in the body), which enhances alertness.

Adenosine is not a “bad guy” in the body – it is a natural human biological mechanism. Because if you keep working, your body will quickly weaken. Sleep is an opportunity for the body to rest, foster inernution, be ready for the next activity.

Caffeine also causes the body to increase the production of adrenaline, a hormone produced by your body when you are scared, angry, or amused, which makes your heart rate beat faster, and your body prepares for dangerous counter-reactions. This explains why your hands start to tremble a little when drinking coffee. If that s a sign your body is reacting to adrenaline, it would be in a stressful situation.

Caffeine also prevents Phosphodiesterase (an enzyme that helps break down nerve signals) from breaking down the secondary messenger CAMP, so the euphoria signal produced by adrenaline is amplified and maintained longer than usual. This causes the cells in the muscle to increase the efficiency of responding to adrenaline – that is, keeping the euphoria of the brain, leaving the body always awake.

Dopamine has a lot of effects on our brains, but the main feature is the feeling of euphoria; it prevents your body from breaking down dopamine, which means you’ll maintain more “motivating” substances in your body.

Early studies suggested that Caffeine produces dopamine — just like antidepressants (and some illegal drugs, such as cocaine). However, it is now known that dopamine is not paid. It is prevented from reabsorbing – making it last longer in the body. However, this momentary feeling of “satisfaction” will be added as we will “crave” more dopamine.

Theophylline is a bronchial dilation agent. It dilates the body’s smooth blood vessels and muscles, increases blood circulation, and increases oxygen for their activity.

Although Caffeine doesn’t affect Theophylline, it looks like a compound from a chemical perspective (and again, like Adenosine), and it fools the body into thinking it is.

This is why cyclists love Caffeine so much. It increases the function of the lungs, promoting adequate respiration. At the same time, this loosening of the smooth muscle is also known to cause a common effect in humans: “or urination.” This has been scientifically proven; however, it is not a diuretic. Science debunked it in 2015 (according to national geographic)

Thanks to its role in strengthening the brain and muscles, coffee has been hailed as the “foundation of civilized society” – the driving force that always motivates people to revolutions, democratic societies, industrialization and freedom.

How long does Caffeine last?

99% of the Caffeine from the drink enters the bloodstream within 45 minutes of drinking it. The half-life of Caffeine (i.e., how quickly it metabolizes half of your body) is about 4-6 hours. That means that if you consume 300mg of Caffeine at 7 am, then 150mg will still be active in your body by noon. As with most chemical compounds, this metabolism occurs in a downward curve.

People who drink coffee regularly will develop higher caffeine tolerance over time (and can be reversed only by drinking less each day). But if you’re hypersensitive to coffee because it makes you anxious, and sleepless, it comes from your national geography.

Regulating the effects of Caffeine is the work of metabolism in the body, and when it comes to Caffeine, only two genes handle most of the work. CYP1A2 produces a liver enzyme that metabolizes about 95% of caffeine intake. AHR controls the number of enzymes you have. Together, these genes control how much Caffeine circulates in your blood and for how long.

You can refer to how to calculate the amount of Caffeine consumed to estimate the number of cups of coffee that can “mold” into the body each day.

How much Caffeine is in the cup?

In roasted Arabica coffee, Caffeine accounts for about 1% of the total composition (and double that of Robusta). Since Caffeine can easily withstand high temperatures during coffee roasting, after roasting and grinding for every 10 grams of coffee, 100 milligramsCaffeineeine can be consumed.

But most of us don’t eat coffee right after roasting or grinding. Instead, drink a solution of dissolved organic compounds and water and drink coffee.

Therefore, we can only extract 80-90%Caffeineeine during the preparation process. So to know how mCaffeineeine you’re consuming, you need to multiply the amount of ground coffee (IMS) you’re using to brew with 8.

The amountCaffeineeine will vary slightly depending on the method. While paper filters will retain almost absolute coffee residue, metal filters such as espresso, French press, etc.) Allow coffee residue to enter the drink, increasing the caffeine content by a small amount.