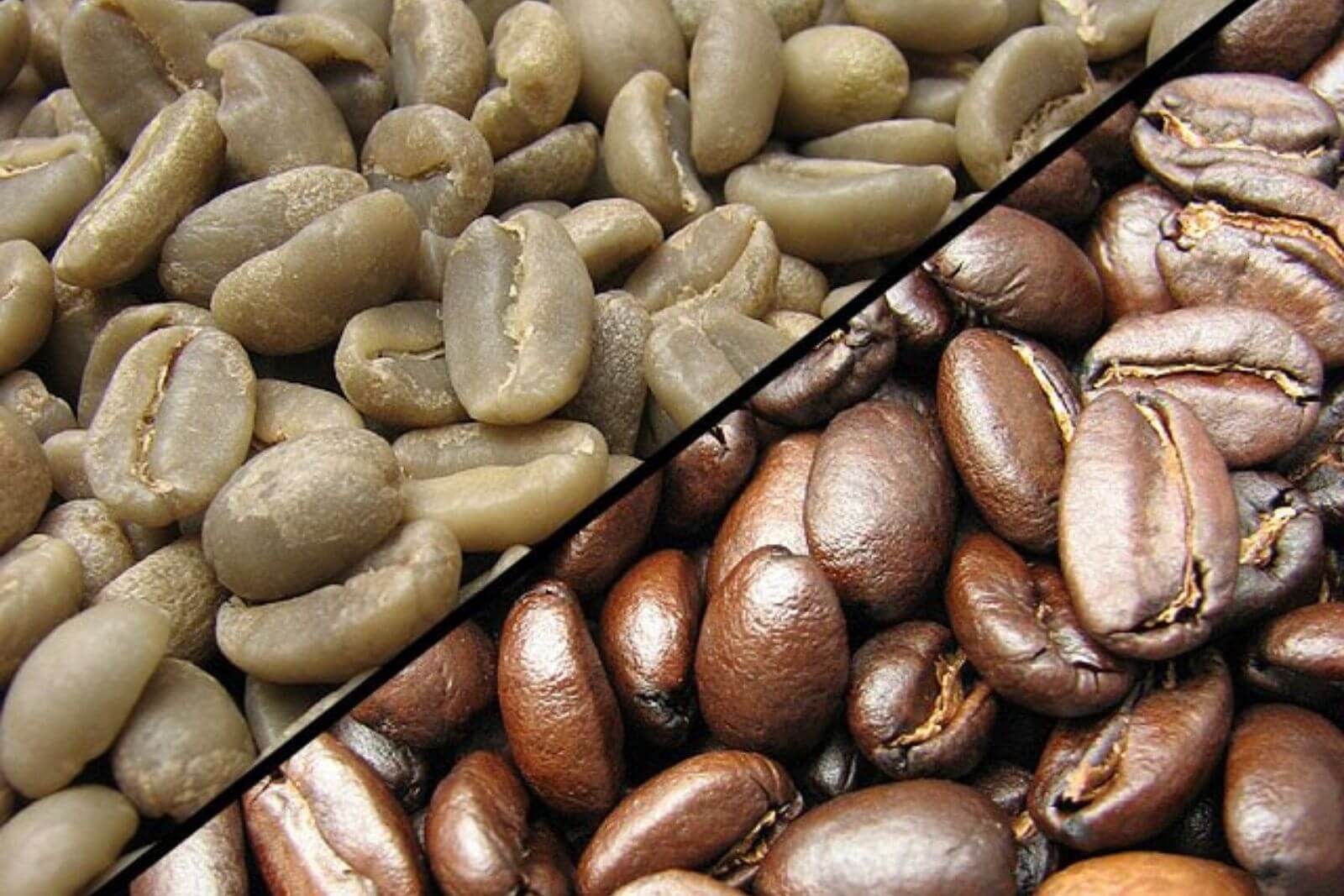 Let’s find out what essential chemical constituents are in unroasted coffee beans using Bean In Love within the confines of this article!

Carbohydrates (hydrated carbon molecules with complex structures) make up roughly 40-50 percent of the chemical makeup of coffee and are split into two categories:

The central element in coffee beans is cellulose, which comprises high-molecular-weight carbohydrates (also known as polysaccharides). This is the critical component that gives coffee its structure and form. Hundreds of chemical elements reside in this structure, which will alter, separate, and combine to form the distinctive chemicals of roasted coffee.

Sucrose is a low molecular weight carbohydrate (commonly known as sugar) found primarily in green coffee. Sucrose makes up 6-9 percent of green coffee’s weight (Arabica). This amount of sugar is determined by the coffee variety, growing region, soil, and, most importantly, the ripeness of the coffee berry at harvest. During the browning and caramelization stages of the roasting process, the amount of sugar in the fruit plays a vital part in providing sweetness for the cup of coffee and the distinctive flavor of the coffee.

Protein is a type of food (protein)

During the roasting process (by the Maillard reaction), these amino acids and sugars will mix to form Glycosylamines and Melanoidins, which give coffee its bitter flavor, brown color, and roasted aroma.

Lipids are a type of lipid (Fat)

Triglycerides are the most common type of fat found in coffee. Because fat is insoluble in water, it lingers in coffee after brewing, especially without a filter. The fat in coffee aids in the preservation of fragrance molecules (aroma) and creates a sense of fullness when consumed.

Arabica coffee has a high-fat content (15-17%), while Robusta has a low-fat range (10.5-11 percent ). You will gain more fat if you drink high-quality coffee. When roasted seeds are stored poorly, fat causes them to oxidize faster and emit a foul odor.

Caffeine and trigonelline are two of the most common alkaloids (organic chemicals with at least one nitrogen atom) found in coffee beans. Coffee’s bitter flavor and stimulating qualities are due to these alkaloids, which make up around 1% of the bean’s weight.

Caffeine is responsible for around 10% of the bitter taste of coffee, but it also accounts for the majority of the stimulating impact. To combat insects, coffee plants produce their caffeine. Robusta coffee has a higher caffeine concentration than Arabica, making it more pest resistant. The roasting procedure of coffee does not increase or decrease the caffeine level of the bean, contrary to popular perception.

Trigonelline is the bitterest component of coffee. Trigonelline decomposes (around 218 degrees Celsius) during roasting to produce a variety of aromatic chemicals and breaks down into pyridines and nicotinic acid (also known as vitamin B3).

More than 200 aromatic chemicals are found in green coffee beans, all of which have the physical property of being volatile. Under the action of heat, these chemicals separate, mix, and produce over 800 additional fragrant compounds when coffee is roasted. This is the fundamental reason behind coffee’s appealing and distinctive scent.

Phosphorus, chlorine, magnesium, potassium, nitrogen, copper, aluminum are the most common components that give the coffee an awful taste. Minerals make up roughly 3-4 percent of the total—the lesser the mineral level, the greater the coffee quality, and vice versa.

Caffeine (1,3,7-trimethylxanthine) is the most well-known N compound due to its physiological effects (stimulation of the central nervous system, increased blood circulation, and respiration). It has a mild bitter taste. A coffee drink contains approximately 10% caffeine and approximately 6% chlorogenic acid. Caffeine levels in beans are reduced during roasting. The pharmaceutical and soft drink industries use synthetic caffeine and caffeine obtained through the decaffeination process. Synthetic caffeine is produced by methylating xanthine, which is derived from uric acid and formamide. Caffeine is used as a CNS stimulant in medicine, usually in combination with another therapeutic agent and in analgesic preparations. Theobromine has diuretic and smooth muscle relaxant properties, but it is not commonly used. Theophylline is a smooth muscle relaxant that is frequently prescribed in long-term formulations to reduce side effects. It is also available in the form of aminophylline (a more soluble preparation containing theophylline and ethylenediamine) and choline theophyllinate (theophylline and choline). The alkaloids can be isolated from natural sources or synthesized completely or partially [5].

Caffeine, theobromine, and theophylline are examples of purine alkaloids, as shown in Figure 1. As alkaloids, they have a limited distribution, but their origins are very similar to those of purine bases like adenine and guanine, which are fundamental components of nucleosides, nucleotides, and nucleic acids. Caffeine is most widely consumed and socially accepted natural stimulant and is primarily consumed in the form of beverages such as tea, coffee, and cola. When compared to caffeine, theophylline is far more important as a drug compound due to its muscle relaxant properties, which are used to treat bronchial asthma. Theobromine is the primary component of cocoa and related chocolate products.

The quality of a coffee cup is primarily determined by the type and variety of green beans used, as well as the roasting regime employed. Furthermore, green coffee beans are not only the starting point for all coffee beverages, but also a significant source of revenue for many sub-tropical countries. The quality of green beans is directly related to their biochemical composition, which is influenced by genetic and environmental factors. Post-harvest, on-farm processing methods are now recognized as having a significant impact on bean chemistry and final cup quality.

However, research on green coffee has been limited, and the results have been dispersed. Despite this, there are already indications that a variety of factors influence green coffee chemistry, beginning with plant cultivation/fruit ripening issues and ending with farmer practices and post-harvest storage conditions. Here, we present the first overview of the knowledge determined thus far, with a focus on pre-factory, green coffee composition. Furthermore, the potential of coffee waste biomass in a biobased economy context for the delivery of useful bioactives is described, as this is becoming an increasingly important topic within the coffee industry. We draw attention to a general lack of consistency in experimentation and reporting and call for a more intensive and collaborative effort to increase our understanding of both green bean composition and how genetic and environmental factors influence bean chemistry, crop sustainability, and, ultimately, cup quality.

The coffee industry is still focused on improving coffee quality, but a new goal is emerging: increased crop sustainability and circularity. Much waste, particularly fruit pulp, goes unused, despite the fact that this massive volume of material, roughly equivalent to that of green beans, may contain valuable chemicals. Research in this area is expanding, particularly in the extraction of bioactives in the context of a biobased economy. We begin by looking at the basic anatomy of the coffee berry and its incumbent beans, as these two structures have very different chemistries. In addition to the green bean, we include the so-called silverskin and the fruit pericarp (Fig. 1A). Although both should be removed before roasting the beans for the beverage, each has its own chemistry that influences the final bean composition both directly and indirectly (Esquivel & Jiménez, 2012). Both are also industrial byproducts that can be used to kickstart a circularity/biobased application for the production of high-value chemicals for the food or non-food industries. For each tissue, we highlight the main chemical constituents, their physiological in vivo role, and whether or not they are related to coffee cup flavor and quality.

Chemical components
Caffeine, tannin, fixed oil, carbohydrates, and proteins are the primary components of coffee. It contains 2–3 percent caffeine, 3–5% tannins, 13% proteins, and 10–15 percent fixed oils. Caffeine is present in the seeds as a chlorogenic acid salt (CGA). It also has oil and wax [2].

Following the acceptance of this brief proposal, the following sections will be thoroughly discussed:

This article will go into detail about the different types of carbohydrate, protein, lipids, and other chemical constituents.

This article will go over various analytical methods for estimating the constituents found in coffee.

Coffee is frequently used as an antioxidant, but it is also a good source of chromium and magnesium, which help to control blood sugar by ensuring proper insulin use.

Green coffee holocellulose was hydrolyzed using a novel method that included anhydrous sulfuric acid and 10% potassium insoluble hydroxide, which was partially solubilized during roasting and resulted in the following sugar ratio:

2D-galactose/2D-glucose/6D-mannose The arabinose was easily acid-hydrolyzed out of these sugars. Caffeine, trigonelline, caffeic acid, chlorogenic acid, isochlorogenic acid, and the ten amino acids were among the other coffee constituents studied and identified. The free amino acids were destroyed during the roasting process. On chromatograms, an analytical method for evaluating caffeine was developed [3].

Condensed tannins are the most abundant phenolic compounds in coffee pulp, whereas phenolic compounds in coffee seeds exist primarily as a family of esters formed between hydroxycinnamic acids and quinic acid, known collectively as chlorogenic acids (CGA). Green coffee seeds contain up to 14 percent CGA, which is present in high concentrations and has a greater influence on determining coffee quality and plays an important role in the formation of coffee flavor.