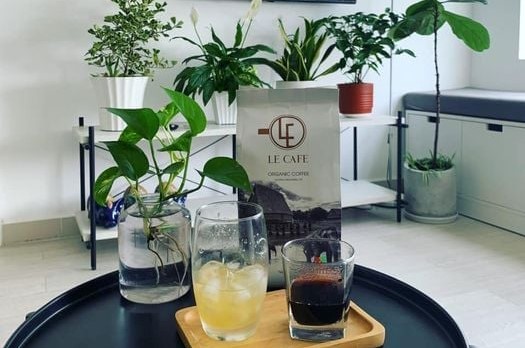 Origin of Vietnamese coffee | Helena., JSC: Coffee may have been planted sporadically by Portuguese, Spanish, Dutch, and French missionaries in the 17th and 18th centuries, but officially and on a large scale, it was not until the French took over Vietnam. Piecemeal laid the foundation of protection over the whole world (1884).

Until the French Revolution of 1789, France was the world’s leading producer and consumer of coffee, produced mainly in colonies of the Antilles in the Caribbean Sea such as Guadeloupe and Martinique… Paris that year had over 700 coffee shops.

Coffee was officially planted in Vietnam by the French in 1857, from the island of Martinique and French Guiana in Latin America because of its tropical climate and soil similar to that of Vietnam. First, Arabica is tested in the North and then in the Central region (Quang Tri, Bo Trach, …); after being harvested, it is processed under the Arabica du Tonkin brand (Tonkin Arabica coffee) imported to France. Arabica was tested first because it is more valuable, originally from Ethiopia, suitable for highlands and high mountains from 800 – 2,000 m, and has a temperature of 18 – 23 degrees Celsius.

Meanwhile, Robusta, a variety from the equatorial African forest, has twice the content of Arabica and is suitable for temperatures from 22-26 degrees and requires rainfall from 1.5m – 2m/year. . This experiment was unsuccessful, partly because the long-settled land was not suitable for the expansion of industrialized plantations, and partly because of political instability due to the lack of colonial status. The habit here is tea culture like China.

Since 1925, after thorough surveys of climate and soil and social and political considerations, the French have experimented with growing coffee in the Central Highlands, especially the Lang plateau. Biang (Lam Dong) and Dak Lak (Ban Me Thuot) are French with plantations and owners; workers are mainly ethnic. In Lang Biang, Arabica is more suitable, and in Dak Lak, it is Robusta. By 2001, Vietnam officially became the second coffee exporting country globally, annually earning more than a billion USD for the national budget.

From the beginning of the 20th century, coffee was a new drink from the townspeople and gradually spread to the countryside. The community and friendly nature of coffee keep people awake able to do manual and mental labor. The cafe can adapt filter coffee for each individual, or coffee brought through a filter pot (percolator) or coffee socks soaked in boiling water to serve many people by pre-mixing at an affordable price. The coffee shop becomes a place of social exchange, both a center of living, an information center, and a suitable trading environment throughout the day.

During the war period 1960 – 1975, coffee shops with romantic and lyrical music, including tragic colors such as songs of Trinh Cong Son, Ngo Thuy Mien, etc., became the culture of a whole world. Youth in the war. After 1975, coffee returned to the North, becoming a national feature with poetic and natural scenery – bringing freshness to increasingly vibrant cities with the pace of globalized market life.

Coffee culture is cozy, romantic, quiet where people can enjoy music, books, paintings, art, or exchange knowledge or feelings. Therefore, if you want to know a person, see where that person enjoys the most entertainment