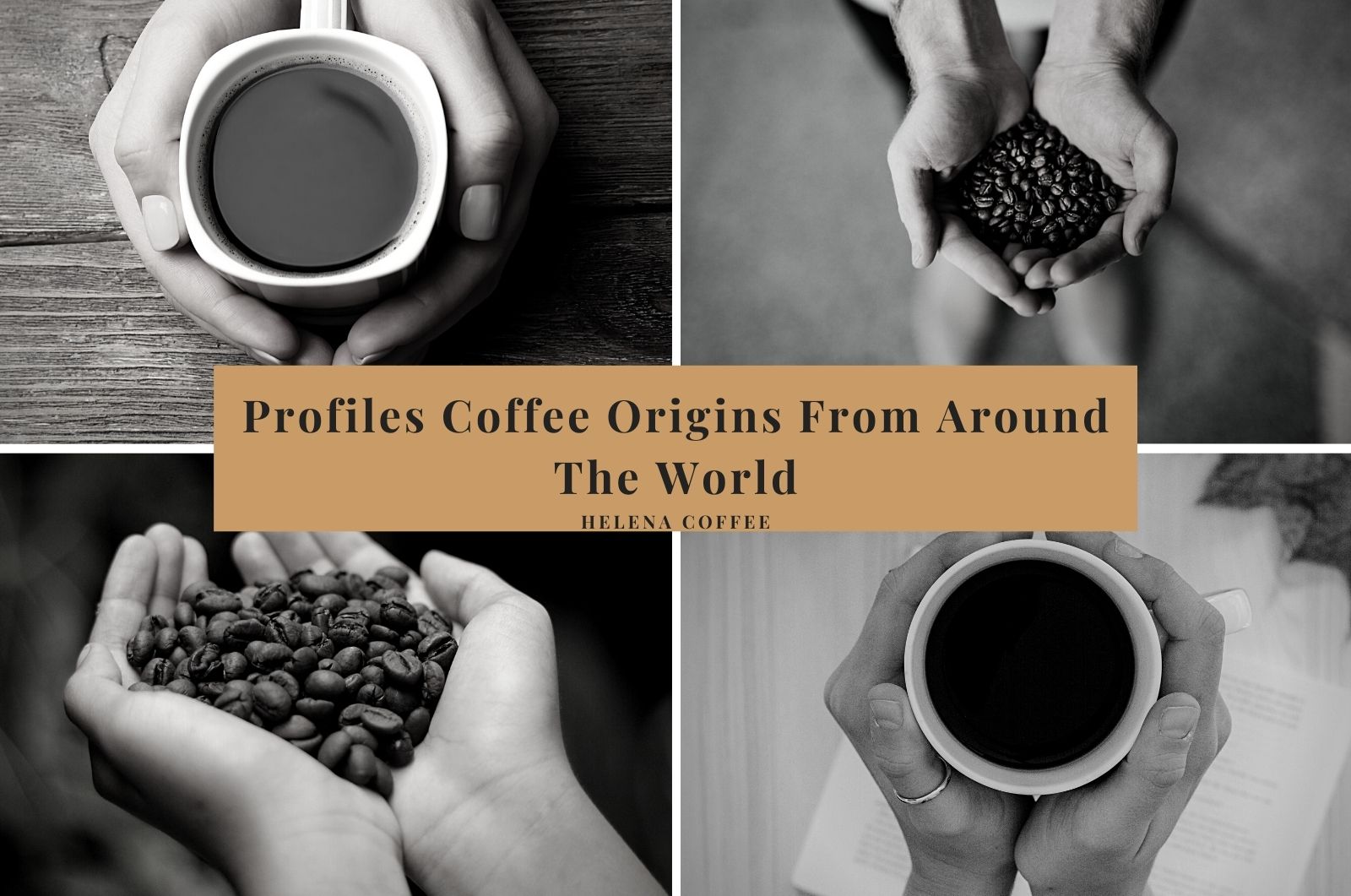 Profiles Coffee Origins From Around The World – Coffee tastes differently. Gone are the days of ordering plain coffee at a fine café. Third-wave cafés let you call according to your taste preferences, coffee origins, and flavour profiles.

If you’re unsure about coffee’s origins or flavours, read on.

Each coffee has distinct flavour characteristics and aromatic qualities that vary depending on the place of coffee origins. The grades of coffee flavour are also determined by coffee variety, namely Arabica and Robusta.

Temperature, soil type, humidity, altitude, processing method, farmer care, and eventually, roasting method all impact coffee quality. Since coffee has so many flavours, from sweet to bitter, nutty to fruity, toasted to flowery, every fan of this delectable black liquid finally discovers the one they like the most.

Coffee origins from Latin America often have a perfect body, acidity, and a touch of fruitiness. Enjoy the chocolaty, nutty, and lemony overtones in the flavour notes.

Brazil has one of the most significant economies in the world and is the most economically powerful and influential nation in South America. About 27,000 km2 (10,000 sq mi) of the government is covered in coffee plantations; of the six billion trees, 74% are Arabica, and 26% are Robusta.

Due to their favourable terrain, climate, and rich soil, the states of Minas Gerais, So Paulo, and Paraná produce the most coffee. However, production has shifted primarily northward due to the severe frosts that Paraná experienced in the middle of the 1970s, which destroyed a lot of the crop.

Most plantations harvest between May and July when the weather is dry, and the fresh crop typically enters the UK between October and January.

Due to its size, Brazil essentially controls the price of coffee on a worldwide scale by determining how much is produced there each year. The New York Commodity Market was established in 1989 to give producers a guaranteed minimum price. Brazil enters the picture since this price is entirely based on supply and demand.

The market may plunge to levels well below the cost of production for many farmers worldwide if Brazil experiences a record crop and produces more coffee than the world truly needs.

Although it is believed that coffee has been grown in Colombia since the 1700s, the production of the bean didn’t start to get noticed until the early 20th century, when it began to account for 50% of all exports from the nation.

There is a significant range in quality, from superb to pretty average, in a country as large as Colombia, with a developed coffee industry distributed across 17 regions.

Due to the numerous distinct microclimates and growing areas, flavour profiles have tremendous potential for variation.

While specific Colombian coffee origins can be exceptionally clean and rich with jammy sweetness and citrus notes, others can be heavy in body with flavours of chocolate and nuts.

Due to the mountainous terrain and temperate climate, which results in various microclimates with varying coffee harvesting seasons throughout the year, the coffee-producing regions are located between the Andes and the Sierra Nevada.

Due to its similarly rich volcanic soil, Guatemalan coffee origins are just as rich and flavorful as its neighbour in Latin America, Colombia.

However, it has a slightly more significant acidity, and there may be a faint smokiness, which coffee enthusiasts perceive to be a regional flavour characteristic.

Ethiopia delivers a delicious, wine-like coffee and is known as the cradle of coffee due to the dozens of coffee varieties still growing in the wild.

The coffee at this place is processed either wet or dry, with the dry-processed kind having a smooth, thick, and syrupy texture, with a flavour profile that is suggestive of blueberry or strawberry.

On the other hand, wet-processed coffee often has subtle floral undertones that give it a lighter body.

Kenyan coffee is known for its intense, vivid, and juicy flavours, making it one of the world’s most sought-after and expensive coffees. The giant coffee bean is widely acknowledged to be the Kenyan AA.

Kenyan coffees have a variety of flavours, from acidic to sweet and savoury to sweet, similar to tomatoes or black currants. The area produces mellow, well-balanced coffees with unique, agreeable flavours well-liked by coffee connoisseurs.

The bitter and earthy flavour qualities of Asian coffees are well-known. Learn about the flavours of soil, herbs, and dark chocolate.

Asia is a rapidly developing area for the coffee industry. The speciality coffee industry is expanding with manufacturers in Thailand, Malaysia, and Java, in addition to the massive volumes of coffee that Vietnam and Indonesia sell.

Sumatra in Indonesia is the ideal option for people seeking a strong, robust, dark, and full-bodied cup of coffee. Additionally, it is adored for having a characteristic smokey, musty, and earthy flavour that is perfect for dark roasts.

Other coffees are distinctive to the locations where they are cultivated and have a bar of fine, dark chocolate and herbal flavour.

The majority of coffee in Malaysia is manufactured from Arabica and Robusta beans. (About 98% of the coffee consumed worldwide.) However, Liberica coffee beans, which often have fruity, nutty flavours, and leave a clean aftertaste, account for 95% of the coffee beans in Malaysia. Malaysian coffee is also renowned for having a robust flavour.

Any coffee enthusiast will benefit from knowing where their coffee comes from and how it gets from the farm to the cup. Once you know the flavours you enjoy, you can determine which nation’s cuisine most closely matches your preferences.