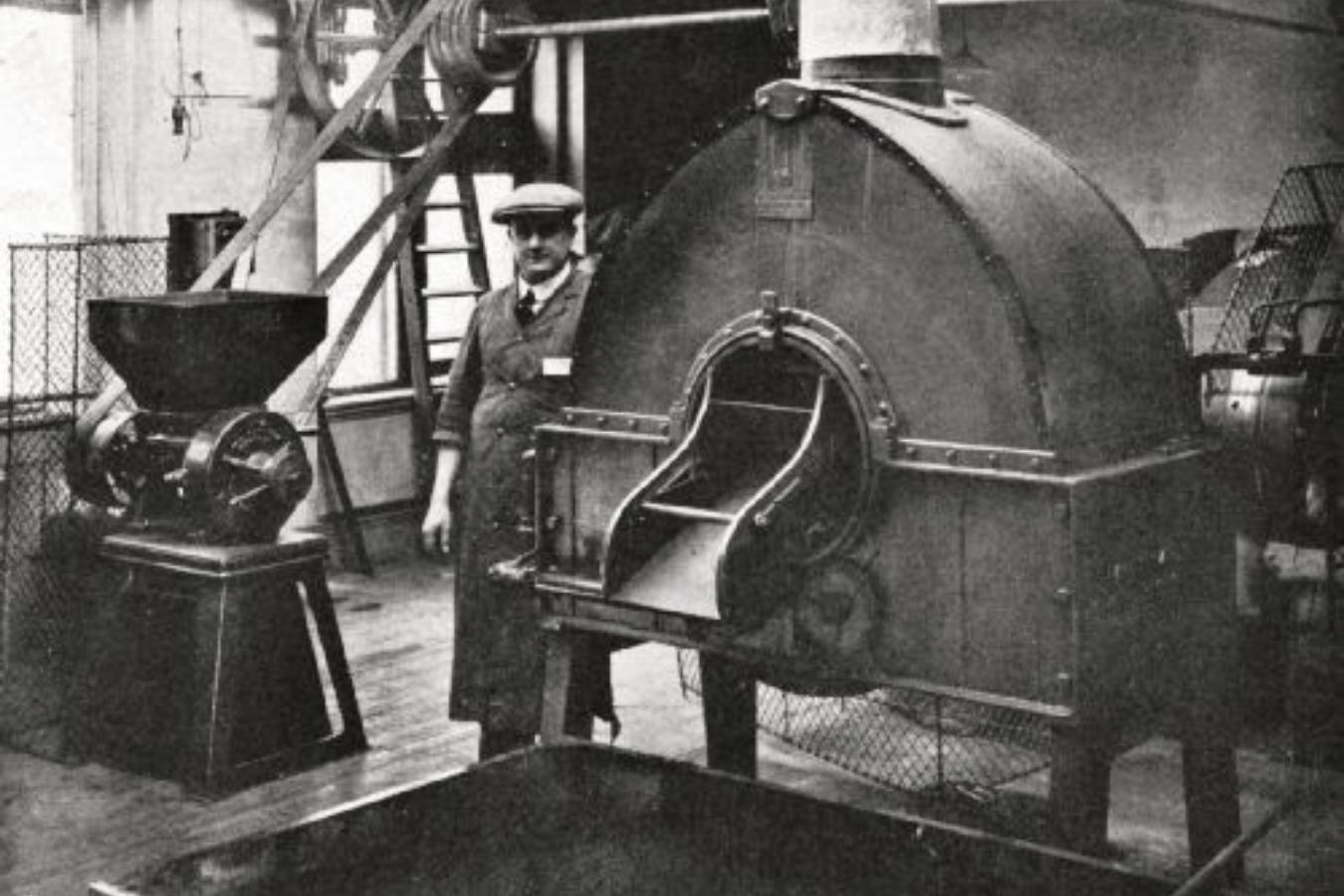 History of Commercial Coffee Roaster: When examining the history of coffee roasting in general (and the evolution of coffee roasters in particular), two distinct phases emerge; First, when people discovered new methods to drink coffee, the new coffee roasting process was in its infancy and resemblance to home cooking.

This article is on the same topic as the history of coffee roasting but only focuses on the innovations of the roaster throughout Europe’s industrial revolution. So I named it “Roasting Machine History” instead of “Coffee Roasting History.”

There were three basic issues that the inventors fought for in the development of the roaster. The first is the distribution of heat over the mass of the coffee beans, which provides better stability and quality.

The second is to speed up the process of unloading the coffee from the roaster, in order to increase throughput (production speed) and reduce labor costs.

The third is to improve the ability to visually monitor the roasting process, ie to monitor the development of the coffee, to ensure the correct roast for a better and more stable industrial product. . – Tristan Stephenson

In the 19th century, various patents were awarded in the US and Europe for commercial roasters to allow the roasting of large batches of coffee. However, home roasting is still very popular. James H. Forbes, in the early days of roasting and selling coffee at a retail store in St.

Louis, Missouri (before becoming a coffee mogul in the United States), says that “selling roasted coffee is bad business since most people roast their coffee at home. People bought coffee at twenty cents and roasted it themselves, While we sell twenty-five cents for “pre-roasted” coffee requires a lot of explanation for its quality and taste.”

Much of the roasting of coffee in Europe at this time was done at home, partly because it was considered manual work, and partly because it ensured satisfaction for each family. By the end of the 18th century, there were quite a few kits capable of roasting no more than a few kilograms of seeds at a time.

However, home roasting is a time-consuming business, sometimes lasting up to an hour, which gives coffee a burnt character and lacks acidity – Tristan Stephenson

The beginning history of commercial roasters

The first decades of the 19th century were seen as an age of innovation in all industries, from dairy farming to textiles and papermaking, with new technologies that reduced the workforce and increased expertise. Higher specialization – Coffee is no exception.

The turning point came in 1824 when Richard Evans patented the first large-scale commercial coffee roaster in England. In addition to its size, this commercial-shaped roaster has added several innovations that have never been seen before, including a mechanism to remove the entire coffee from the roasting chamber easily.

Also included is a sampling tube so that the beans can be monitored throughout the roasting process – a significant step forward in the pursuit of quality.

However, there were very few French coffee roasting inventions in Europe at this time. Most of them are more busy creating artistic coffee-making tools (roasting coffee). Coffee grinding in France is not a separate business.)

Meanwhile, inventors were looking to improve coffee roasting in the UK and USA, and keen minds worked to create coffee roasters fit for commercial use. In this direction, the application of deep thought was destined to bear fruit in America in 1846 and England in 1847-48.

James W. Carter of Boston patented the design for the pull-out roaster in 1846, a prototype chosen by commercial roasters for two decades. Later. The Carter roaster is essentially a hand-rotated iron drum about the size of a large wine barrel and fixed to a kiln. However, it has one big difference: loading and unloading the coffee takes the entire drum out of the oven and opens a door on the side.

Before Carter solved the problem, water had to be poured into the roaster to reduce the heat then, the coffee was quickly picked up, splattered all over the place, and engulfed in steam. This way, roasting can be stopped while maintaining the heat source, and batches can be made faster.

Carter doesn’t claim to have invented the combination of a cylindrical roaster and a kiln; Initially, his aim was only to prevent heat loss to the surrounding environment.

After Carter, the following coffee roaster patent was granted in 1847-48 to William and Elizabeth Dakin in England. Instead of placing the coffee container over the fire, the Dakin roaster has a structure like a horizontal cylinder, placed on top and can be moved horizontally to get in and out of the roaster.

The flame will not heat the cylinder directly but only the outside of the cylinder chamber. Roasters may have felt more comfortable working, but Dakin has not enjoyed a commensurate commercial success.

Jabez Burns, the father of the modern roaster

The undisputed father of the modern commercial coffee roaster was undoubtedly born in London, but Jabez Burns later moved headquarters to New York. In 1864, Jabez Burns was granted a US patent for the Burns coffee roaster. This was the first machine that did not have to move from the fire to discharge the roasted coffee and left one of the most evident marks in the invention of coffee roasting equipment.

Burns coffee roasters have demonstrated two significant improvements over previous designs, which can be found in contemporary rotary drum roasters. The first is a series of spiral metal rims placed on the inside of the roasting drum – essentially a modified Archimedes screw design.

The screw-mounted edges continuously direct the movement of the beans back and forth throughout the length of the roasting drum, helping to distribute the heat evenly around the beans while also making it easy to remove the coffee in one place. Drum head roasts without shifting the entire structure.

Drum roasters remain the top choice for many companies in the global coffee industry, the darling of the specialty coffee industry – and now proudly stand alongside many of the world’s best coffee brands.

Timeless design, wide range of sizes, allowing for simplicity of roasting process while ensuring high customizability, has helped the drum secure a place for some of the best roasters in the world. – Tristan Stephenson

Burns’ second innovation was in post-roast cooling (he was one of the pioneers). In an 1867 design, he adopted a method of drawing air to cool the coffee after roasting through a perforated floor system, speeding up the cooling process and improving product quality. Modern drum roasters are arranged with a cooling tray and operate on the same principle.

In 1867, Jabez Burns was granted a US patent for a coffee cooler. Burns also launched a study on the cooling process of coffee after roasting. Before Burns demonstrated its role in rapid cooling, various methods were used, such as placing the coffee in revolving drums covered with cloth (to filter out dust and dirt).

However, it was also effective when applied to pressure—adequately used. However, Burns’ idea was to cool using suction to create a wind that passes through the coffee layer from the top, which is still influential today.

From his expertise in roasting and coffee issues, Jabez Burns quickly rose to a position of industry leader. Both an engineer and an entrepreneur, with very important contributions to the coffee industry.

He patented an improved form of his roaster in 1881 and a sample coffee roaster in 1883, before his death in 1888; And since then, his sons have carried on the business, perfecting a number of innovations and continuously introducing new machines – William H. Ukers

In addition to exploring the roasting process, the search for fuel also boiled over during this period. Early industrial roasters were heated by coal (smoke certainly contributed part of the flavor of the coffee). Until natural gas was welcomed in European and American cities in the mid-19th century because it was both smokeless and easier to control. Most commercial roaster manufacturers switched to producing gas models from the 1880s on.

Cage-cage roasters (like large iron spheres) for better heat distribution gained brief popularity in the early 19th century. Still, these designs soon fell out of favor due to inoperability. By the turn of the 20th century, the model for the modern roaster was more or less clearly outlined through Probat ‘s ‘Perfekt’ roaster design introduced in 1907.

With the horizontal cylindrical roaster drum, operated with precision High precision and hot air heating with cyclone system for cooling and removal of burnt shells – All these industrial achievements came to the field of “benign” coffee roasting earlier on the battlefields of the war. II at that time

Appearing in a series of documents from around the turn of the 20th century is the Perfekt roaster – An industrial mammoth compared to the earlier spherical roaster.

Extraordinary mechanical work with exposed belts, levers and gears, it’s an ingenious combination that, when contextualized from our point of view today, the Perfekt is the epitome of the modern roaster. – Andrew Russo, dailycoffeenew

Further, far-reaching advances in coffee roasting efficiency (but relatively minor changes in the basic design) were welcomed by roasters throughout the 20th century. The advent of the double drum (drum) double-layer roasting) and indirect heat transfer is the two most essential factors in improving coffee quality.

Traditionally, a direct-fired roaster is heated from below by a gas flame, an upper exhaust that sucks smoke, steam, and any other by-products out of the drum. Meanwhile, indirectly heated roasters pump hot air into the roasting drum.

This means that the drum temperature will be much lower than when heated directly. Most importantly, the hot air will be circulated in a recirculation current to compensate for the heat. This economical solution allows a portion of the hot exhaust gas to be reused back in the roasting chamber, thereby helping to maintain a more stable drum internal temperature, minimizing the possibility of grain scorch.

As electrical power became more and more accessible at the turn of the 20th century, the coffee roasting industry adapted and took full advantage of the power of electricity. The electric motor has helped to free up human labor in operating the drum.

And because the thermoelectric sensor can be easily controlled, roasting is done more consistently than ever and with less danger. For the first time, roasters can control temperature precisely in the digits with better energy regeneration.

Sophisticated control systems on modern roasters allow complete control of temperature, airflow, air circulation, drum rotation speed, cooling mechanism, and heat output. They can also be configured with such things to suit the requirements of each type of nut.

Today, roaster manufacturers from Germany continue to lead the way in the drum roaster trend. Probate took over the role of Jabez Burns in 1998 – the most revered name in the roasting industry and occupies a trusted place in the specialty coffee industry.

Toper and Garanti (founded in the 1950s), two Turkish roasters, continue to maintain their reputation, alongside Dutch roaster manufacturer Giesen. Interestingly, also from the USA, from the respected names of Diedrich and Loring, the former produced beautiful traditional style roasting drums, and the latter, became famous for their automatic roasting system. Smart Roast.