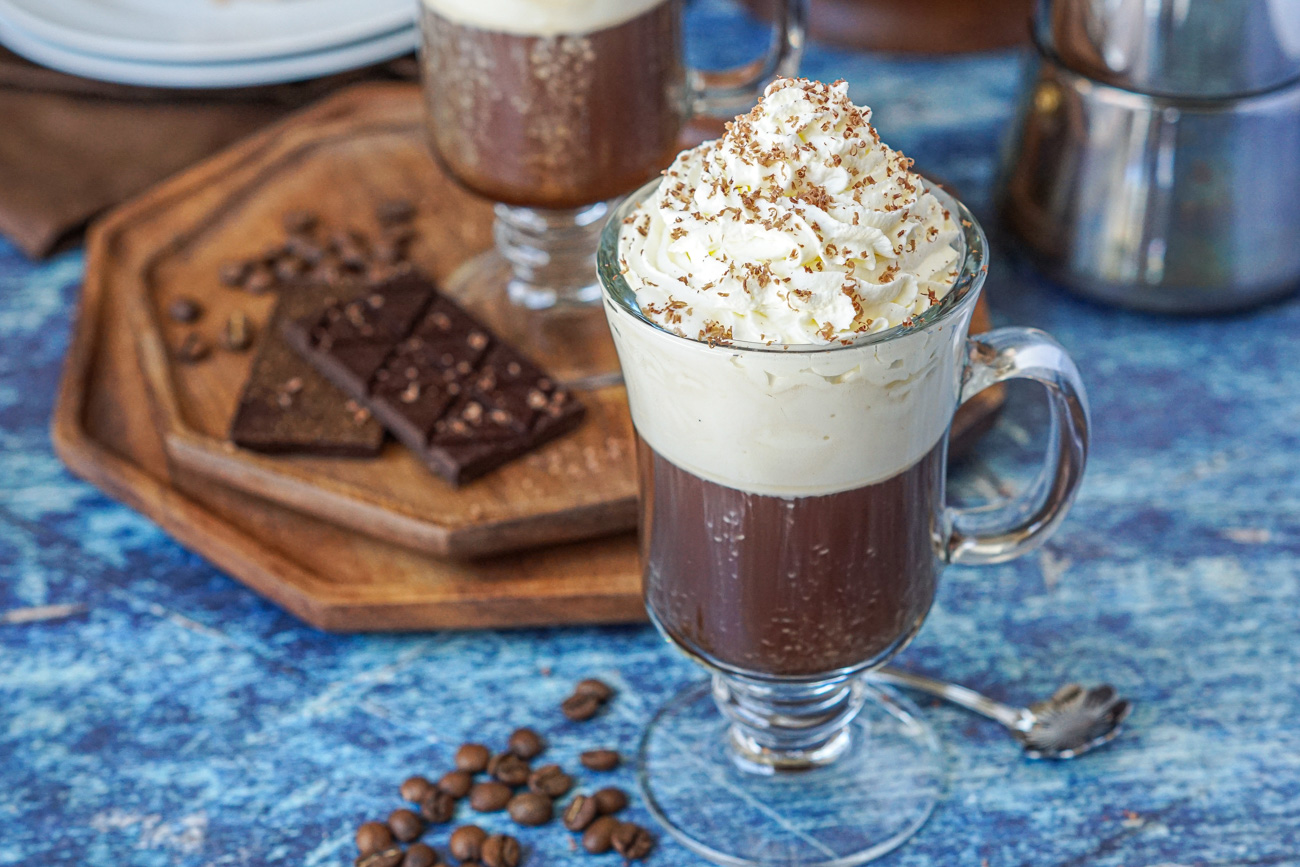 Viennese coffee is a finer variety that strongly resembles cafe mocha. The two can be distinguished from each other by their very distinct textures.

Espresso, chocolate syrup, chocolate ganache, and a ton of whipped cream and garnishes are all included. Whatever you like—cinnamon, chocolate chips, cocoa powder. Making this coffee at home may be your best bet as it’s mostly a European beverage and isn’t frequently available in American coffee shops.

The chocolate in Vienna coffee makes it similar to a mocha.

Without chocolate, you can’t create Viennese coffee. That is the entire purpose of this coffee beverage, and it will have extremely particular requirements. Therefore, in addition to adding chocolate ganache, you’ll also need to add some chocolate syrup to the drink to create a lovely coating on top.

You might make a drink that closely resembles a cup of mocha by just adding whipped cream and chocolate syrup to a shot of espresso.

But you have to put a lot of chocolate in Viennese coffee. Actually, this resembles a dessert more so than a cup of coffee. The confusion about whether to use a spoon or drink it is part of the enjoyment, to be honest.

Depending on how coffee or chocolate-heavy you want your drink to be, you can use as much coffee as you like. I use less chocolate than the recipe suggests because I prefer mine on the coffee side.

Cream, either whipped or ganache, is a component of Vienna coffee.

You’ll need a ton of cream, in a variety of forms, to make your Viennese coffee. And while you can prepare this cocktail for one person, it would actually be too much work for just one cup.

It’s best to prepare a sizable quantity and invite some guests around.

We require heavy, flowing cream as the first type of cream. We require it to create the chocolate ganache, which is simply chocolate that has been melted into cream to create a thick icing.

Then, either uses canned whipped cream or whisk some heavy cream into it. Whichever method works best for you, however, because whisking it yourself results in a much nicer flavour, I advise spending the extra time.

Now, all of this will pack a ton of calories, along with the chocolate we use and the chocolate syrup. For 151 ml/5 oz of beverage, one serving has roughly 421 calories. The recipe that follows provides more details on that.

Just be aware that I calculated this with less chocolate to let the coffee really shine. Additionally, since the chocolate and chocolate syrup already contain sugar, none has been added. This is a light yet overall powerful drink. It’s up to you how you use this information.

Vegan choices can, however, be used in place of the cream. If you truly want a thicker drink, you’ll need to add a thickening agent, and your overall calorie count will be close to that of the non-vegan version.

The texture of Vienna coffee is similar to that of French hot chocolate.

Okay, so I’ve discussed preparing coffee, adding ganache, and other preparations. But what is the end result?

However, the precise texture is up to you and your tastes. I always request a less dense French hot chocolate because I personally find it to be excessively thick.

But that’s just me; you might enjoy the thick beverage. It tastes to me like a perplexing blend of hot cocoa and chocolate pudding. Nevertheless, it is always attractive.

So if you’re anything like me, you’ll enjoy the recipe below. I’ve also given instructions if you’d prefer it thicker.