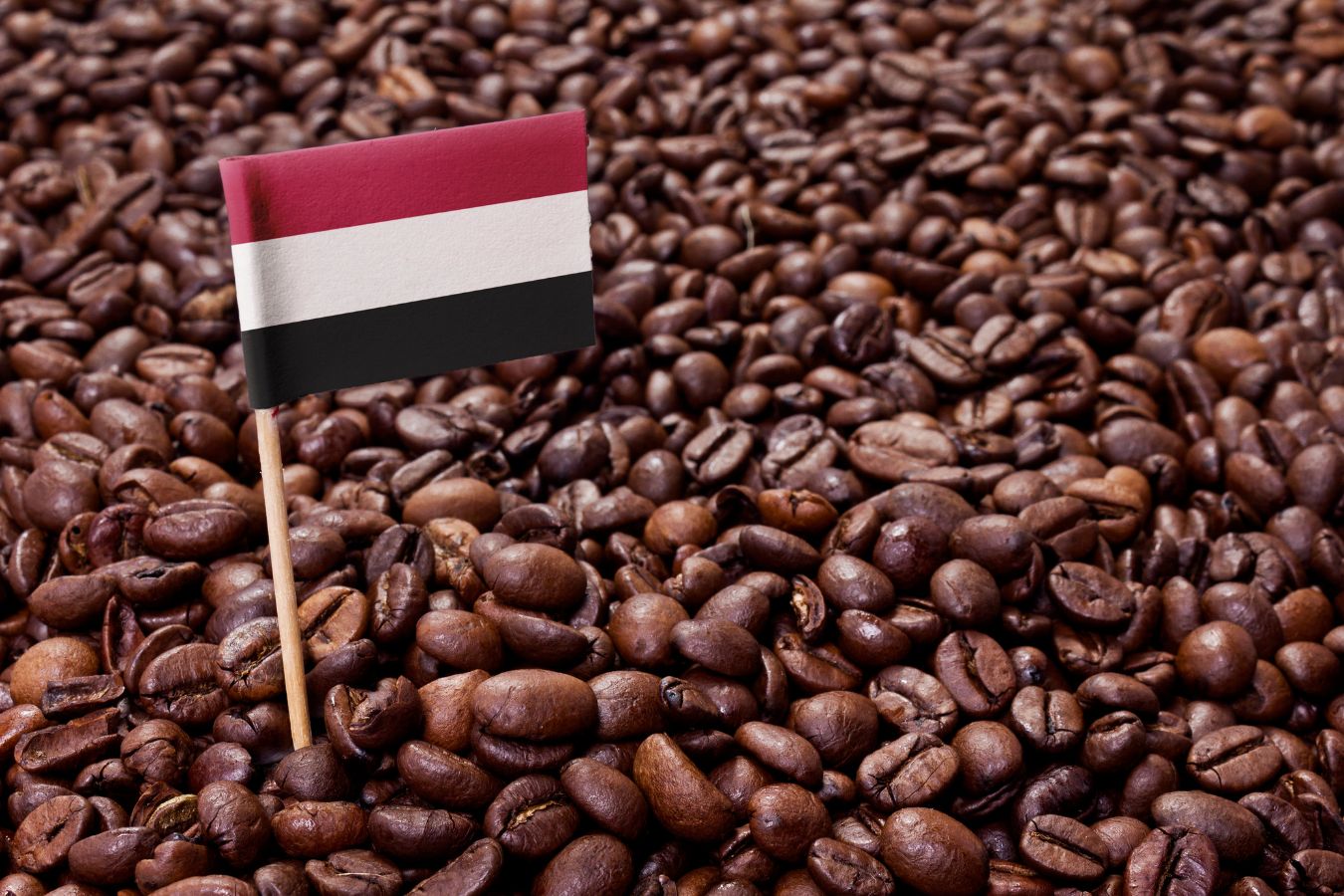 Coffee beans were first farmed as a commercial crop in Yemen in the mid-15th century, after being transported from the coffee woods of southwestern Ethiopia over the southernmost tip of the Red Sea. Yemeni coffee began to spread worldwide on European trade routes in the 18th century, laying the groundwork for contemporary Arabica coffee farming.

Yemen coffee cultivation in a nutshell

The Marib dam and a coffee branch are shown on Yemen’s national flag. It is no coincidence that coffee consumption as we know it now began in Yemen in the 15th century when the Sufis discovered it. However, the Yemeni coffee tree’s previously dominant position in quantity and quality began to wane over the twentieth century. CafeImpots compiled the following data in 2017:

Yemen’s coffee production is inferior to that of the world’s leading producers, such as Brazil, Vietnam, Indonesia, Colombia, and Ethiopia. This is because Yemen receives substantially less rainfall than other countries, and present agricultural methods are also old-fashioned, but most critically – due to the country’s extended state of war.

Beans yemen mocha (yemen mocha mattari) is one of the most popular terminologies and variations in the coffee industry. The Mocha harbor, located on the southwestern tip of the Arabian Peninsula in present-day Yemen, is known as “Coffee Mocha” (Moka, Moca, or Mocca).

From the 15th century through the early 18th century, Mocha was known as a “mecca” for Arabica coffee (coffee tea). Mocha port was not suitable for coffee cultivation; instead, coffee was delivered there. From Yemen’s interior to the port of Mocha To maintain the exclusivity of the Arabica coffee varietal, Mocha coffee beans were only transported after roasting during the 16th and 17th centuries.

Merchants from England, the Netherlands, and France supported trade at the bustling port of Mocha during this prosperous period. Coffee trees from Mocha arrived in Ceylon (modern-day Sri Lanka) and Java, Indonesia, through Dutch traders in 1658. (and through several other unofficial routes). Whether you liked it or not, Mocha coffee quickly spread over the globe.

There is some ambiguity about “Mocha coffee”

In its glorious history, the coffee business has misused the reputation it has earned from the word “Mocha” to call everything else – coffee-related. With this name, you will discover a location, a coffee variety, a preparation technique, and even a drink named “Moka.”

Initially, the word “MOCHA” referred to a Yemeni port where coffee was exported (This dates back to the 16th century, when the Ottoman Turks occupied Yemen in 1536 and used the Mocha port of Yemen to export coffee).

This spelling was quickly altered to ‘MOKA,’ the name used to describe Yemeni coffees. Some organically processed coffees from other nations, such as Ethiopia’s ‘Moka Harrar,’ are still referred to in this fashion.

On the other hand, the contemporary use of the term “Mocha” to represent a chocolate-espresso coffee blended drink confuses consumers even more (according to The World Atlas of Coffee).

Yemen coffee beans occupies a unique position in the lengthy history of Arabic coffee types. While Ethiopia is rightfully hailed as the “birthplace of coffee” – in scientific terms, Ethiopia is at the epicenter of evolutionary origins, where the first Arabica coffee plants arose from a crossbreeding of two ancestral species (see also sources of coffee varieties) – Yemen is the birthplace of coffee.

Yemen is a secondary dispersal hub for Arabica coffee originating in Ethiopia, according to a comprehensive 2020 study on the genetic diversity of Arabica coffee. Nearly all of the world’s arabica coffee (i.e., all coffee farmed outside of Ethiopia) comes from the original Yemeni coffee estates.

This offers intriguing research questions, such as whether Yemeni coffee trees can assist us in learning more about coffee drought tolerance (essential traits due to the effects of climate change). Changes in Climate)? And, in the face of climate change, may the Ethiopian native coffee tree provide a chance to crossbreed kinds that will thrive in the shade/agroforestry?

Yemen mocha mattari is known for its mocha flavor

Coffee has been grown in Yemen for almost 500 years, under vastly different conditions from the lush, humid Ethiopian woodlands where it originated. Yemen is hot and dry, with abundant sunlight flooding the agricultural systems.

It’s possible that just a tiny percentage of the seeds carried back from Ethiopia survived Yemen’s early coffee-growing days. But the plants that do survive will have to endure significant selective pressure for a complete sun-soaked farming system in arid circumstances.

Some of the benefits in the surviving Yemeni plants over their Ethiopian parent plants could have resulted from farmers noticing and selecting random changes. This makes Yemeni coffee the most expensive globally – at more than $15 a kilo.

According to Abd al-Malik al-Thaur, a ministry official, the beans are gathered from around 34,500 hectares of parched terraced fields on mountain slopes at 700 to 2,400 meters. Yemeni agriculture (according to The New Arab).

Coffee trees have been cultivated in Yemen in the same manner since the first trees were established. Thousands of small-scale Yemeni households rely on this for their survival (with a total of nearly a million people working in all stages of coffee production, from planting to finished products). This production chain is still entirely manual, with harvesting, grading, and dry processing all carried out by natural sun drying.

Although previously one of the most prized names in the world, the door to Yemen’s coffee exports have been locked since the 1950s, on the one hand, due to low production, on the other hand, the state of war has pushed In comparison to other coffee-producing countries throughout the world, the price of raw green coffee is exceptionally high.

All of the preceding has tightened the country; without the efforts of many individuals and groups, Yemeni coffee production may have wholly perished. There was a period when coffee trees had to give up territory to drug farms (named Qat or Khat because of the Arabic translation) with significantly more significant revenues. Khat chewing is so prevalent in Yemen and the Horn of Africa that the ban on Khat was secretly lifted in the mid-2000s.